The Most Effective Celebrity Endorsements For Super Bowl 2017

We are gearing up to that time of year when football is on everyone's minds - and more so... one game in general.  The Super Bowl! And all that advertising that goes with it.  Our agency's attention is not typically focused entirely on the ball play however, but on the high priced commercials in what is appropriately deemed the most expensive night on TV. In 2017 brands paid the highest ad price in Super Bowl history at $5 million for a 30-second ad.  And in return, reached an estimated 111.9 million audience, the third largest ever.

But keep in mind, this price tag is only the amount paid for that precious :30 seconds on air.  It does not include the costs of creating the commercial itself. Or the millions paid for celebrity endorsement appearances.  Kia, Tide and T-Mobile were just 3 of the 26 brands to feature high profile celebrities in their TV ads. In this blog, Hollywood Branded looks at the effectiveness of celebrity endorsements in Super Bowl 2017 commercials. 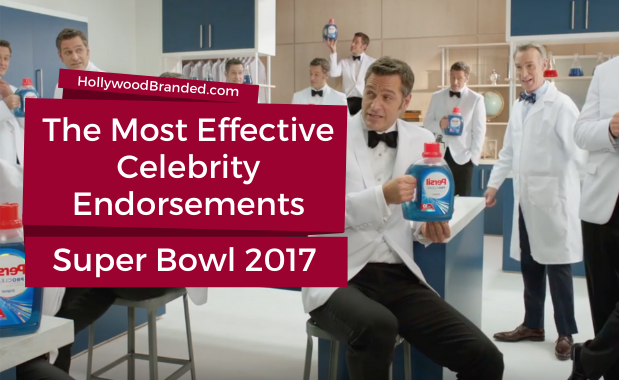 With celebrity endorsements for ads ranging anywhere between $750,000 - $10+ million and production of the average commercial costing anywhere from $500,000 to $1 Million, some brands can be  assumed to have spent up to $10 to even $15 million on their Super Bowl commercials for the 2017 game.

With what looked like an absolute blowout being turned on it's heels in the fourth quarter, Super Bowl 51 came to a close with a big win for the Pats and Tom Brady (again).   And some big wins for some brands...  Check out the celebrity driven ads below, and let us know which one is your favorite - and which was a total bomb.

This 30 second spot utilizes Intel's 360 replay technology to make Tom Brady's ordinary experiences look extraordinary. The technology allows broadcasters to pause parts of the game and view at all angles, and was used in the 2017 Superbowl.

Sprint's commercial is a great example of how a spokesperson for a brand can become a celebrity in their own right.  The spot, entitled "Car", shows a man pushing his car off a cliff, followed by his telling his children "Well, kids, Daddy's dead."  We then cut into Verizon's famous past spokesperson, Paul Marcarelli, who sees the exchange and says, "Let me guess. Faking your own death to get out of your Verizon contact? You could've just switched to Sprint."

Starring actor John Malkovich, who was recently featured in Squarespace's short-film "Journey".  John Malkovich appears in his design studio chatting on the phone to someone who already owns "JohnMalkovich.com" and bargaining to get it for himself.  Where fiction turns to fact, Malkovich is not only an actor but has a passion for fashion design - and is partnered with Squarespace to help release his next collection.  Prior to the game, Squarespace released an extended version of its pre-game ad, showing John Malkovich trying to register a domain.

T-Mobile's first spot features Justin Bieber arguing that neither celebrations nor data plans should be limited. The pop star busts some some seriously energentic moves to prove his point. This endorsement also included an instagram post from the singers account, which has gone otherwise unused since mid 2016.

The second spot features unlikely friends Martha Stewart and Snoop Dogg as they host a potlock for the big game. The two encounter some differences in planning preferences, but come together in the end by agreeing T-Mobile unlimitted data is "all that and more".

"That's not a Buick" ad campaign mocks the outdated misperceptions of the brand in this pee-wee football game setting. One of the player's dads says "If that's a Buick, then my kid is Cam Newton" and as supermodel Miranda Kerr steps out of the car, his kid transforms into the NFL star.

If you ever worried that your high school yearbook photos might come back to haunt you... for many celebrities this became a reality on Super Bowl Sunday. Honda's spot brings old yearbook pictures to life by voicing over portraits from the likes of Steve Carrell, Tina Fey, Robert Redford, Amy Adams, Jimmy Kimmel, Viola Davis, Stan Lee, Missy Elliot, and more. The ad was seriously laughter inducing.

Kia had an over-the-top commercial starring Melissa McCarthy as an environmentalist who attempts to save a whale, a falling tree, a charging rhinoceros, all with the help of the new Kia Hybrid. The rescue missions feature some over the top and hilarious consequences.

The ad, called "Man & Machine," features freestyle dancer Lil' Buck and the new LC 500 performance coupe, with actress Minnie Driver as the voiceover. In the commerical, man and machine are compared thorugh a series of impressive dance moves, suggesting synergy between the driver and the Lexus. But in the end, only man can bring emotion to the machine.

Mercedes' spot includes Peter Fonda, Steppenwolf's "Born to Be Wild" and references to the 1969 classic flick "Easy Rider," and is also the first-ever Super Bowl commercial directed by Joel and Ethan Coen. The ad takes on a more comedic approach than usual for Mercedes, and ends on the note that a Benz is "built to be wild".

The Febreze comedic spot plays on bathroom humor, and the inevitable need for air freshener during the big game. The ad stars actress Kathryn Hahn.

Lady Gaga appeared in a commercial for Tiffany & Co, where she briefly talks about challenging the status quo. Lady Gaga was the hype of Super Bowl 51 - the performer was Pepsi's chosen half time show star as well.

The spot features spokesman Jon Hamm with the big announcement that H&R block has partnered with IBM Watson.

The action-themed spot stars actors Jason Statham and Gal Gadot. And a out of it chef who comes to the realization that a food truck just might be the better way to go...

Pre-Super Bowl, the company released a 30-second hypnotic teaser starring Jon Lovitz, skipping the $5 million buy for this one... but followed up with a spot during the Super Bowl focusing on nutrition and good fats. Because of the celebrity focus, we are including pre and post game spots in this post.

The spot stars Christopher Walken poking fun at the lyrics of his co-star Justin Timberlake's N'sync days. Walken says he has had enough... and it ain't no lie baby, bai bai bai.
Buffalo Wild Wings
This spot pokes fun at Brett Favre's history of throwing interceptions, as Favre comes to the realization through a spooky dream that the cause of these itnerceptions was actually Buffalo Wild Wings after years of searching for answers.
KFC
KFC's Super Bowl spot features two of its celebrity colonels. In "Colonel vs. Colonel," Georgia Gold Colonel Billy Zane is pitted against Kentucky Buckets Colonel Rob Riggle. The scene takes place in the Georgia Gold colonel's office, where Mr. Riggle's character tries to (unsuccessfully) interrupt Mr. Zane's gold-plated character.
Pizza Hut
This thirty second spot stars George Takei, as he applies his iconic catch phrase "oh my" to the speedy and delicious experience of ordering pizza hut.
POM Wonderful
Wonderful Pistachios "Treadmill" spot features Ernie the Elephant, a character voiced by WWE star John Cena, as he pledges his allegiance to pistachios.
Snickers
Snickers spot starring Adam Driver continues the hilarious "You're Not You When You're Hungry" theme.
Sprite
NBA superstar Lebron James pokes fun at advertising in this minute long spot by saying he isn't going to tell you to drink sprite. He's just going to ask if you want a sprite. A cold, tasty, delicious sprite.

Proactiv
The overtime helped one company massively!  Proactiv, owned by Guthy-Renker, is a brand who has found their success from infomercials starring celebrity endorsers including Justin Bieber.  The brand bought their first Super Bowl (and maybe not their last!) ad on a contingency buy that aired during the overtime.  Starring Olivia Munn, the fun spot sees her jumping into a teen age boy's bathroom, with a solution for his acne.

And if you have interest in seeing what brands did in the past, check out our blogs: