No Dirty Laundry Here, It Must Be A #TideAd

Super Bowl, the time of year large social gatherings huddle around a television set donned in the same colors, boasting a cornucopia of chicken wings, food platters, and ever-flowing alcohol, all with the sole intention of observing their team claim ultimate victory... for some, it's to see the commercials. Yes, you heard me correctly. Commercials.

Though, it must be emphasized these are not just ordinary commercials, these are Super Bowl commercials; a transcendent form of advertising if ever there has been. Over the years these coveted slots have seen their fair share of commercials from humor to political, heart warming and even tear-jerking (we're looking at you, Budweiser). However, this year one brand asked what it meant to be named a Super Bowl ad and found its answer: a Tide ad. In this blog, Hollywood Branded explores the most memorable ad of Super Bowl LII, and how Tide went from old and dingy to new and bright and found success through the celebrity endorsement campaign.  Wait, this is starting to sound like a Tide ad, maybe it is... 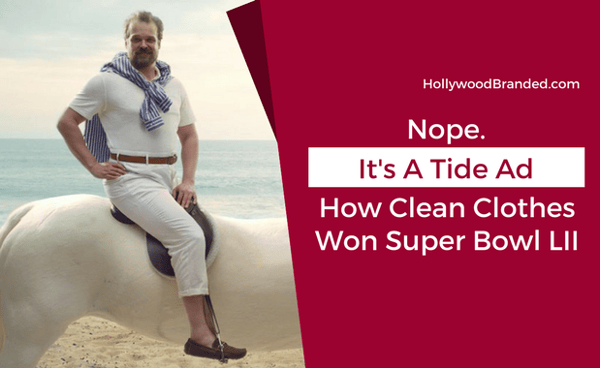 An Advertising Breath Of Fresh Air... And Laundry

How exactly did the company achieve such a feat you say? How did one brand manage to takeover almost every single commercial and make them one gigantic, omnipotent Tide ad? By sheer ingenuity...

Pop culture icons, talking babies, beautiful women, sexy cars, and of course, adorable animals... All of these have been viewed countless times over, recycled tropes audiences and brands have come to count on during the Super Bowl. But this year, one brand boldly went where no brand has gone before with a revolutionary creative campaign.

From first kick-off, Tide’s commercials perfectly replicated memorable ads of the past in both looks and tone, from a bro-like beer ad, to a luxury car ad, to even a lower-budget insurance ad. Which led a simple question to be asked: 'What makes a Super Bowl ad?' Answer: the stain-free clothing that everyone wears, according to Stranger Things star, David Harbour. Then, another question, one that changed the game (no, not football) but the ad game. “So, does this make every Super Bowl ad a Tide ad?” Harbour asked, by second quarter everyone was a believer.

Every pause in the game brought a different take on the notion. First, we see a sleek car snaking up the bends of a mountainside road, the make and model are unknown until we get a bit closer, awaiting the logo shot and -- wait, it's a Tide Ad. Next, we see friends in the bar with unmarked beer in hand, and David Harbour. It's a Tide Ad. Another ad, this one with an insurance agent standing beside the helpless motorist, and again Harbour is right there to set us on the right path. It's a Tide ad.

Those were not the only commercial tropes to be duped by the detergent. The following quarter brought us a Clydesdale in a field, trademark of the Budweiser commercials we know and love, and a geriatric tennis player presumed to be shelling out arthritis pills, both of them just Tide ads. Those who remember Super Bowl LI immediately recognized the set up of the strangely sexy Mr. Clean commercial, for a split second perhaps expecting a part two of the encounter... but it's yet another Tide ad.

And just when fans thought they had touched every commercial known to Super Bowl 'Tide Ad-ed up' the spoof continued, even signing on infamous personality Isiah Mustafa of Old Spice -- or should we say, the man your man could smell like?

And who could forget the David Harbour vs. Terry Bradshaw, the Tide sponsor of Super Bowl LI, bit?

Suffice it to say by fourth-quarter almost everyone was wondering if the game itself was also just another Tide ad.

Turn Of The Tide

According to Talkwalker, an analytics firm, Tide reigned champion of the internet if numbers are anything to go by. Tide saw a total of 163,800 mentions during the Super Bowl, with only 11,000 of those mentions including #TidePodChallenge, the disastrous internet challenge the company previously had been fighting to nullify.

Now back to Super Bowl. Tide’s first 45-second ad with Harbour aired during the first quarter, and within minutes the first tweet had 120 retweets and 270 likes. By noon the next day, the tweet had more than 5,000 retweets and 18,000 likes.

As mentioned earlier, Tide put famous ads from brands like Old Spice and Mr. Clean (which are also owned by Procter & Gamble) and Budweiser for a spin cycle, with a goal to include those very brands in on the fun.

According to a rep, Old Spice, Mr. Clean, and Budweiser had prior knowledge of the campaign, and Tide also coordinated some posts with Old Spice spokesman Isaiah Mustafa, and other celebrities including Drew Brees, Danica Patrick, Antonio Brown, and Betty White, just to name a few. To see the complete list of the Most Effective Celebrity Endorsements For Super Bowl 2018 check out our previous blog!

One Load Complete Now Onto The Next

It's been a little over a month since Super Bowl, and over the passage of time so to does it bring the inevitable: hype decline. The gifs have been used, the memes created, and the campaign that took the internet by storm now a fond memory. Or is it? Just as with life, there will always be laundry in need of cleaning, and creative ways to incorporate detergent, which is why Tide and Saatchi & Saatchi New York are still revelling in the afterglow.

The campaign’s effect on sales remains notable, even a month after, which makes for an impressive feat. In an interview with AdWeek a rep for the Procter & Gamble brand went on to say, "Initial sales results show double-digit growth for Tide Ultra Oxi since the game. That follows some impressive metrics from the Super Bowl itself, when #TideAd was used more than 45,000 times and became the No. 2 trending topic on Twitter (second to the Super Bowl itself), and the campaign enjoyed more than 640 individual stories written about it in the media."

Just in case anyone was worried, don't be. They are still riding the Tide high, and likely will be for some time... all the way until next Super Bowl, in fact.

Is Your Brand #TideAd Ready?

It's hard to capture lightning in a bottle, but that doesn't mean it's impossible! With the right knowledge, and right tools, you too can strike a perfect match for a memorable creative campaign -- just like Tide!

Also be sure to check out these blogs our team wrote on how to best work with celebrities - and take one out of Tide's book of successful celebrity endorsement.

Don't worry, this isn't a Tide Ad, but we do have an important question for you: are you ready to take the next step? If so, we have you covered! Download our pricing guide and see how Hollywood Branded can get your brand ready for Super Bowl worthy success.