With Beyonce's investment in WATERMELON WATR, a sports drink company, she joined a growing trend of celebrities investing time, energy and (gasp) sometimes their own money in non-alcoholic beverages.   And these partnerships have been a game changer for both the brand and the celebrity in terms of sales, as many of these partnerships have taken off.

And they mean a lot to the brand, as all of a sudden, the brand is able to compete against Fortune 1,000 brands in terms of celebrity cache and garner fan interest -- without paying the enormous endorsement fees.  In this blog, Hollywood Branded looks at the latest trend of celebrity beverage endorsers and what big names are behind various non-alcoholic beverage partnerships. 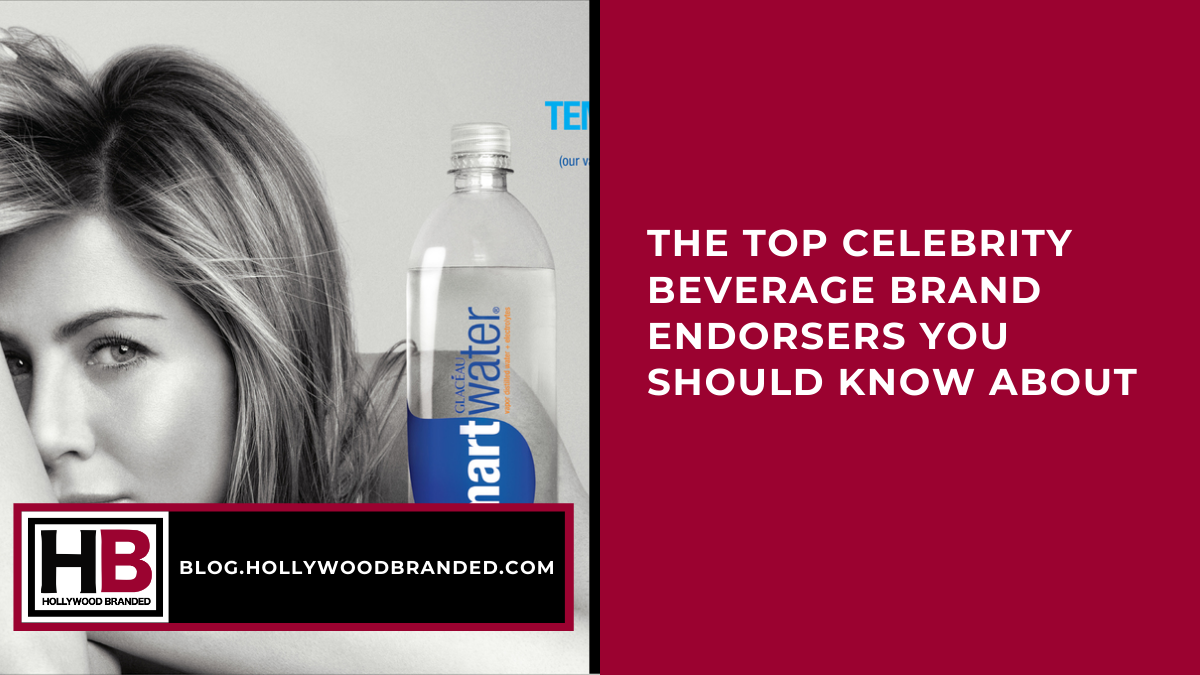 Consumer Packaged Good brands are among a category of brands which have an option when partnering with celebrities to provide the potential for more bang for the buck - and that is an equity stake in the company.  Some celebrities may choose to invest actual dollars into a brand and get behind it.  Other celebrities might take a guaranteed fee minimum for a celebrity endorsement deal, along with stock options.  And is some rare instances which their management and agents don't typically support or advocate for, a celebrity may agree to only take an equity stake, with no fee guarantees.

When the celebrity has a little bit invested in the game, you tend to see more of that celebrity with the brand versus a line by line list of check marks next to contracted deal points the celebrity is obligated to participate in to receive compensation.

Beyonce, arguably one of the most followed and admired celebrities of our time has recently become a "meaningful" shareholder in the sports drink company, according to its founder and creative director Jody Levy.

Although the company is three years old, it has since jumped into the spotlight with the investment of the music phenomenon - showing just how powerful celebrities can be to a brand. 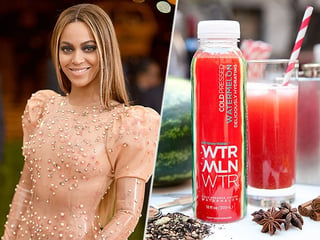 And according to the star, it's not just a business move. She apparently actually appreciates what the company stands for. Which is a BIG WIN for the brand.  In a recent statement she shared:

"I invested in WTRMLN WTR because it's the future of clean, natural hydration; as partners, we share a simple mission to deliver accessible wellness to the world.

Not only did the singer promote the beverage as a healthy drink choice, but also an empowering business move for females - something her fans can absolutely get behind.

Perhaps one of the most popular and talked-about celebrity endorsed beverages example is the powerful equity partnership in Vita Coco coconut water by pop star Madonna. 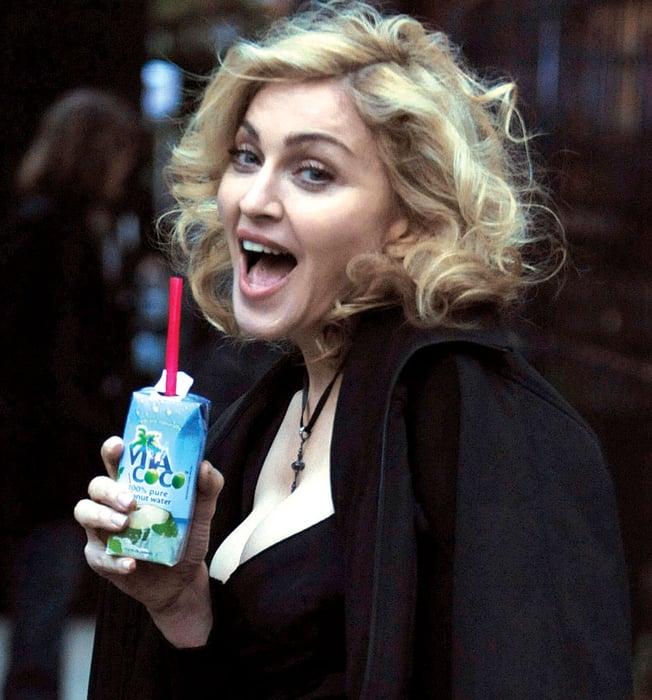 After investing a reported $1.5 million dollars in the company in 2010, Madonna went so far as to say that she drank Vita Coco every single day on her tour. For a woman who famously seems impervious to the aging process, people were no doubt swayed to try the product. In fact, sales jumped 168% after her investment was announced. Talk about celeb power.

Along with Madonna, A-list celebrities Demi Moore and Matthew McConaughey both invested in the brand and Rihanna became the face of it. These investments and their corresponding endorsements have contributed to the long-term success of the brand. 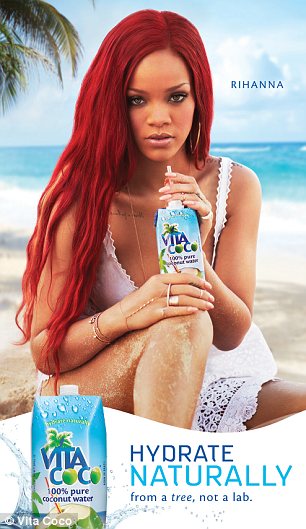 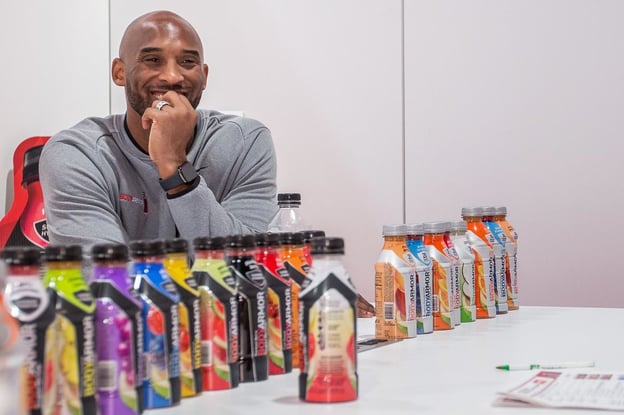 Since his investment, the brand has grown exponentially and has attracted star athlete celebrity endorsers like Andrew Luck, James Harden, Mike Trout, Richard Sherman, and many more in almost every sport. 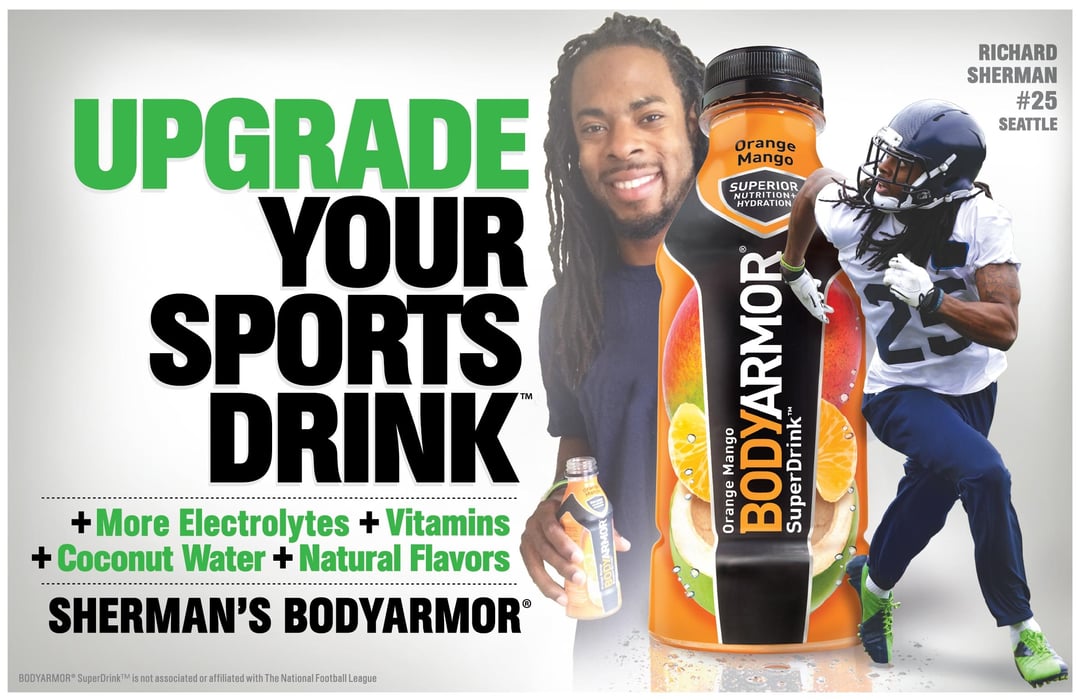 What is unique about these endorsers is that they are also investors in the brand, with Bryant on the Board of Directors for the brand. Each star has an important stake in the company - which shows consumers that they truly believe in the product they hawking.

Of course you've seen lovable and seemingly ageless Aniston in an ad for Smart Water. They're not hard to find. But did you know she's been an investor in the brand since 2007?

Yep, Jenn has been a loyal investor in the Glaceau-owned bottled water company for quite some time and as we've said before, she's pretty much the perfect celeb endorser. 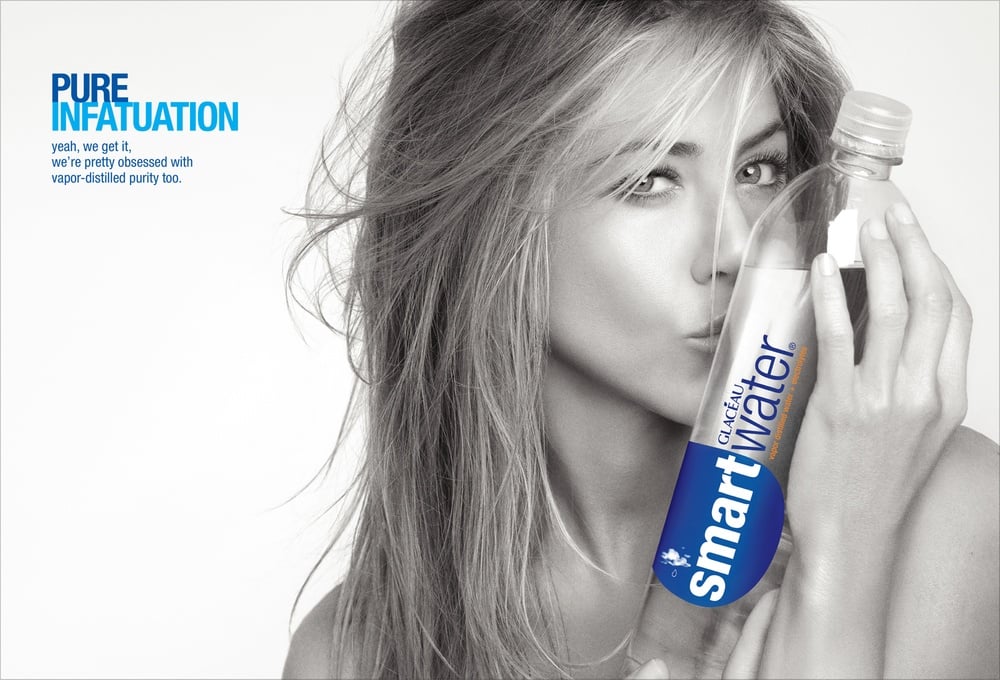 Appealing to both older and newer audiences with her penchant for lovable rom-coms and her timeless role in Friends (which has remained a hugely popular series especially after being added to Netflix), Jenn's ads for the company are cute and likable.

After a clever placement in his Reebok commercial, Glaceau, the parent company of VitaminWater took notice of the famous rapper's endorsement - and made him a huge part of their marketing strategy... and their company.

After appearing in many commercials for the brand, 50 cent decided to take equity in the company over a salary. The brand also came out with an exclusive flavor for him - "Formula 50."

However, his likeness continued to appear in ads for the brand, as he had created a tied-in awareness of his image to the brand's - which was beneficial to both. 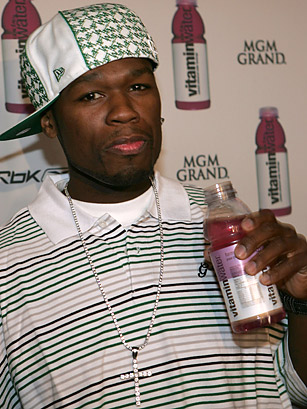 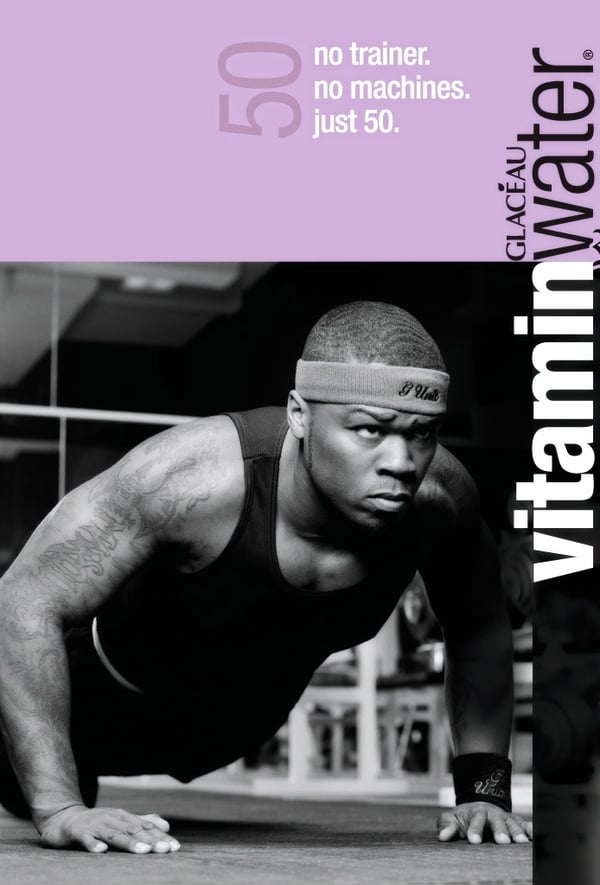 The bottled water company based out of Los Angeles has a pretty impressive roster of celebrity investors. The list includes pop stars Katy Perry and Becky G, as well as Diplo, Max Martin and Juicy J. Of the water, Katy Perry said,

"Hydration is key for me since I'm always on the go- whether it's on tour or working out. Not only does CORE come in a beautiful package and taste great, it's pH balanced to work in harmony with my body. It's just natural for me to want to be a part of something that makes me feel good."

With a slew of younger celebs with a huge social media impact, their investment was a big deal to CORE. According to reports, the brand continues to grow rapidly and has been seen in more and more health food stores and rest stops.

Aquahydrate - The Next Big Thing Thanks To Celebs?

Aquahydrate wasn't doing too well when Mark Wahlberg was offered some while training for his movie The Fighter. And just like a Hollywood movie, he became an instant fan of the bottled water.

After learning what he was drinking, he recruited friend and fellow celeb Sean "P. Diddy" Combs to invest in the company with him. After their investment, billionaire investor Ron Burckle invested in the company as well. 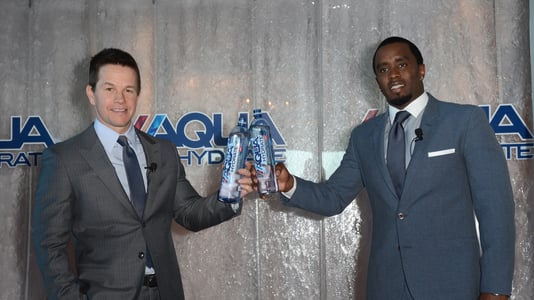 Sales have certainly improved thanks to these investments and subsequent endorsements, so we will have to see what is in store for Aquahydrate - but if we've learned anything from celebrity investments in beverages, things are certainly looking promising for the water brand.  One thing holds true here - there isn't an option for any other water to EVER get product placement (at least in a scene with him) in a Mark Wahlberg movie.  He's Aquahydrate all the way...

Actor, singer, and now…investor? In 2016, Timberlake became an investor and the face of Bai flavored water. As its first “Chief Flavor Officer,” Timberlake helped come up with new flavors for the water giant, as well as worked on marketing campaigns and product launches with the executive board. Unlike many other celebrity partnerships, Timberlake wanted to ensure that he would be closely involved in many of the bigger decisions for the company, making him a hands-on investor and partner for Bai. 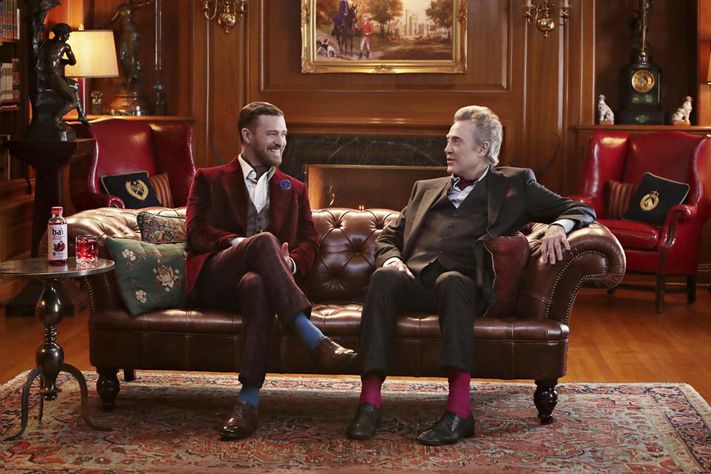 While pop princess Taylor Swift is no stranger to brand deals, her partnership with Diet Coke is one of her longer-lasting ones. The years-long partnership started in 2013 and went through 2016. The collaboration started with some TV commercials and print ads and even landed her a sponsored tour. While she didn’t typically post on her socials about the drink, her sponsored tour and many commercials allowed Taylor to introduce Diet Coke to an entirely new generation of soda drinkers. 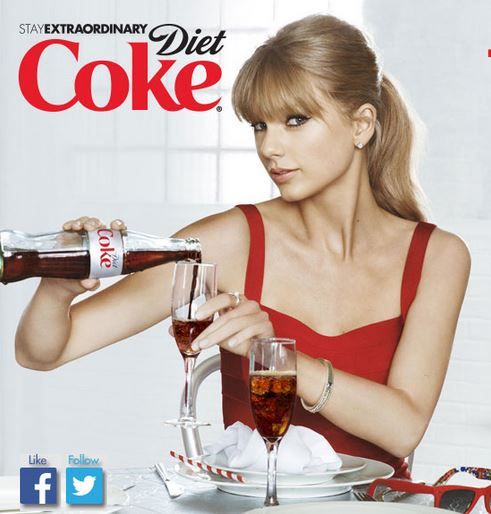 One of Drake’s first worldwide brand deals was with Sprite, but it went further than just a few commercials and print ads. The partnership was paired with the brand’s “Spark” campaign, which worked to give “teens a platform to express their creativity through music and film.” While the partnership on its own was enough for the Toronto-based rapper to want to work with Sprite, the campaign aimed at helping young artists enticed Drake even more. He felt the need to pay it forward, in a sense, to other up-and-coming artists, since he was in the same position not too long ago. Regarding the campaign, Drake explained that “I think it's a great thing to be responsible, in a way, for exciting young kids." 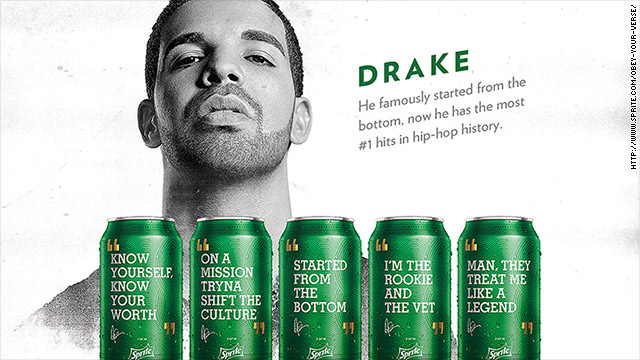 Consumers Want To Drink What Celebs Drink - It's Proven

We all have to hydrate. And for dazzling celebs, just plain old tap water won't do the trick. But more so than that, celebrities see beverage companies as exciting ways to invest and endorse. And consumers who are fans see those celebs holding beverages that drive them to give them a try - all on celebrity endorsement alone.

Take a look at our blog that helps outline a plan for your brand to feel confidant in your partnership: 6 Steps To Safeguard Celebrity Endorsement Partnerships.