The film 'The Fault in Our Stars,' a story about two teenagers played by Shailene Woodley and Ansel Elgort who meet at a cancer support group and fall in love, has had a strong debut with late night numbers at $8.2 million. Though the film is not on a grand blockbuster scale like some other recent releases - 'X-Men,' 'Godzilla,' 'Edge of Tomorrow' - it is among the most anticipated, and is predicted to deliver big numbers by the end of the weekend.

(Photo via ListenFirst Media and Deadline)

How could a tragic love story between two cancer survivors possibly be more anticipated than than Angelina Jolie as 'Maleficent,' 2014’s highest-paid film actress? Or the 'X-Men: Days of Future Past,' the seventh film installment of the franchise, with each film averaging $402,467,677 at the worldwide box office?

Here’s what we can learn from the marketing success:

With a script created based upon the content of a book, content that has already been proven to garner consumer interest, the partnership is more easily signed off at the executive level. In the last two years, film distributors have averaged 20 major releases based on books. These projects leave plenty of opportunity for brands to find partnerships that are already known and welcomed with open arms by their targeted consumers
Even more attractive is if a book has been on the New York Times Best Seller list, as this means that it has likely already developed strong national, sometimes even global, readership. And “The Fault in Our Stars” passes that test. But the fact that the novel is a New York Times bestseller, even debuting at #1, isn’t the half of it.

Paying attention to New York Times bestsellers is a great place to start, but looking at a film adaptation from one that already has an immense online following can lead to an absolute home run.
The author, John Green, not only has multiple books on the New York Times Best Seller list, but is an Internet phenomenon. He and his brother have been running a video Tumblr blog for 7 years called Vlogbrothers full of humorous, entertaining rants on a broad range of topics that has garnered a huge online following, even attracted attention of the President himself.

The blog has over two million subscribers, along with a YouTube channel with over 600 million total views. There are 43 separate Tumblr blogs dedicated to the book, and Green himself has approximately 30 meme sites about him.
It’s safe to say the majority of this captured audience is of the tough millennial crowd. With this coveted demographic group consuming as many as 18 hours of media a day, the majority of which is spent on the Internet and social networking, this is extremely valuable. 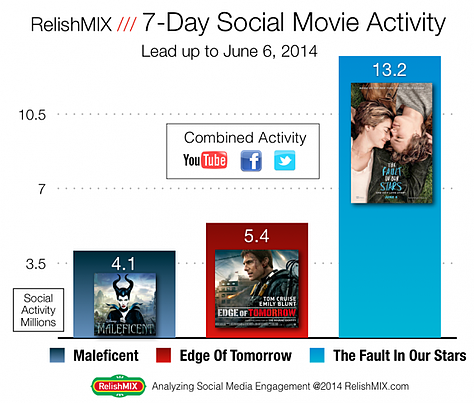 The author himself has garnered a huge online presence - 2.48 million Twitter followers, for starters - and even better, the cast has as well. The two young stars, Shailene Woodley and Ansel Elgort, each have decent social media followings in their own right.

Fresh off of the anticipation and press surrounding the "Divergent" series, Woodley has her own fan base on Twitter of over 650,000 followers. Elgort has 519,000.

The movie itself has 410,000 followers, as well an extremely active themed hashtag, the book/film acronym #TFIOS. The YouTube site has well-exceeded the 20 million mark. The film’s Facebook page has over 3.6 million likes, and over 1.5 million people are talking about the movie.

The Green brothers are currently asking their social media followers to buy a team shirt from on elf the participating World Cup soccer teams to raise money for sarcoma cancer research. Woodley has posted often about the decision to cut her hair and donate to charities benefitting cancer survivors, with hashtags such as #itgrowsback and #hairforhazel, based on the film’s character. Both she and Elgort have attracted an extremely enthusiastic group of fans, with over 100 fan pages devoted to them in countries all over the world.

Each has crafted the platform in order to have an active voice with their fan base – which directly results in more box office sales, and money in their own pocket at the end of the day. With the way things are looking now - the film has quadrupled Tom Cruise’s "Edge of Tomorrow" opening night box office numbers - "The Fault in Our Stars" has all the right ingredients to take it to box office glory.