The Power Of Social

For brand marketers who are skeptical of the significance of social media and celebrity social followings, this is the year to change your viewpoint!  Some may argue that celebrity endorsement partnerships are a pointless youth obsession - but there is actually evidence pointing towards its ability to capture some of the most coveted target markets brands want to cater to.   And not just that millennial demo.

In fact, in the last few years music, TV and film marketers are actually taking celebrity social media influence into consideration when choosing who to cast for a production, and what content to market.  The celebrity's own ability to be a marketing machine - and more than just the actor - is driving casting decisions. In this blog, Hollywood Branded takes a look at why celebrity social followings play a huge role in marketing strategies. A Case Study On Katy Perry

The fact that Katy Perry is one of the most followed person on Twitter is extremely significant to her brand marketing. Her following and her relationship with that following allows her to push her albums, singles, and music videos directly to her fan base in a more intimate way. 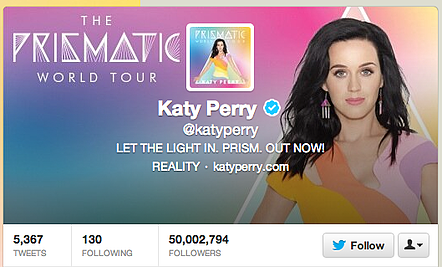 But her Twitter newsfeed is not just tweet after tweet of tour promotions or a constant plea for fans to buy her album. The songstress has mastered the art of a healthy balance of the sharing of everyday thoughts and observations, cute cat videos, behind-the-scenes shots of her life, plus the occasional self-promotion plug. Even when she is asking her fans to view a music video, her fans feel like they are part of a community and are therefore more than willing to support her.

There is no question that this relationship has yielded positive numbers for the pop star. Her album, Prism, became her third album to reach over one million sales. She also happens to hold the record for the Most Pop No. 1s on Billboard, tied with Rihanna, who is a social media force in her own right. Combined across Instagram, Twitter, and Facebook, Rihanna is the most followed celebrity on social media.

These artists have such a passionate fan base, that they each endearingly name them: Katy Perry has her “Kitty Kats,” Rihanna has her “RihannaNavy,” Justin Bieber has his “Beliebers,” Beyonce has her “Beyhive,” and that’s just a small sampling.

If it weren’t for the extreme passion and engagement of Beyonce’s Beyhive on social media, the success of their Queen Bey’s surprise album release, which took the music world by storm, could have never been to the extent that it was. The pop star took advantage of her solid Instagram following and engagement – now at over 110 million following and with an average of 2 million likes and 10K comments per post – to share the news with her fans.

But just being a celebrity doesn’t guarantee that type of following. For example, Martha Stewart, who is one of the world’s most successful female entrepreneurs, has less of a Twitter following than Snooki. In fact, the Jersey Shore alum has two times the following of the business titan.

Of course, there is a generational gap, but it’s not just Millennials who are learning how to own social media as a benefit to their marketing strategy. Vin Diesel has built a huge following on Facebook, and is said to run his own account without the help of a social media team. Will Smith is also extremely active on Facebook, as is Jackie Chan. Each has crafted the platform in order to have an active voice with their fan base – which directly results in more box office sales, and money in their own pocket at the end of the day.

Kevin Hart has been tremendously instrumental via his social media promotions in driving traffic to theaters to see his movies. His films Ride Along and About Last Night, both of which he very actively pushed through social media, surpassed expectations, landing within the top two box office spots upon release.

Emma Roberts and Emma Watson have both been equally key to their film projects’ strategic marketing success with their social media involvement. But Emma Stone may have executed the perfect social media promotional tactic, regardless of the fact that she doesn’t have a Twitter account. The starlet competed with Viral Video King Jimmy Fallon in his now infamous celebrity lip syncing challenge on the Tonight Show. The combination of Jimmy Fallon’s killer writers and social media team, plus Emma Stone’s absolute charisma and lip syncing battle skills, made the video go viral in just a few days – just in time for The Amazing Spider-Man 2 movie release. Not that the super hero franchise film wouldn’t have done incredibly well on its own, but you have to have a feeling Emma Stone fans everywhere will be all the more eager to support her at the cinema.

What happens if the celebrity your brand is working with gets involved in a controversial crisis, how will that reflect on your brand? Learn more about creating a safety net when working with celebrity talent.

Are you interested in learning how to successfully partner celebrities to your brand - without spending a million?  Watch this short webinar to learn Hollywood insider tricks to create and kick-start an entertainment marketing campaign that is the perfect extension for your social media program.