Here's What You Missed!

If you've been following our blog for a while, you know that we're obsessed with all things pop culture. But can you blame us? It's fascinating! This weekend saw a plethora in all things entertainment and pop-culture. Elton John live streamed his final North American concert on Disney+, celebrities like Taylor Swift won big at the American Music Awards, and so much more.

Keep reading to stay up to date with what's happening in Hollywood and to find some tips and tricks to help your brand enter the entertainment world. In this blog, Hollywood Branded discusses brand endorsements at the AMAs, the power of branded content in The Walking Dead Finale, and the latest in pop culture marketing news. 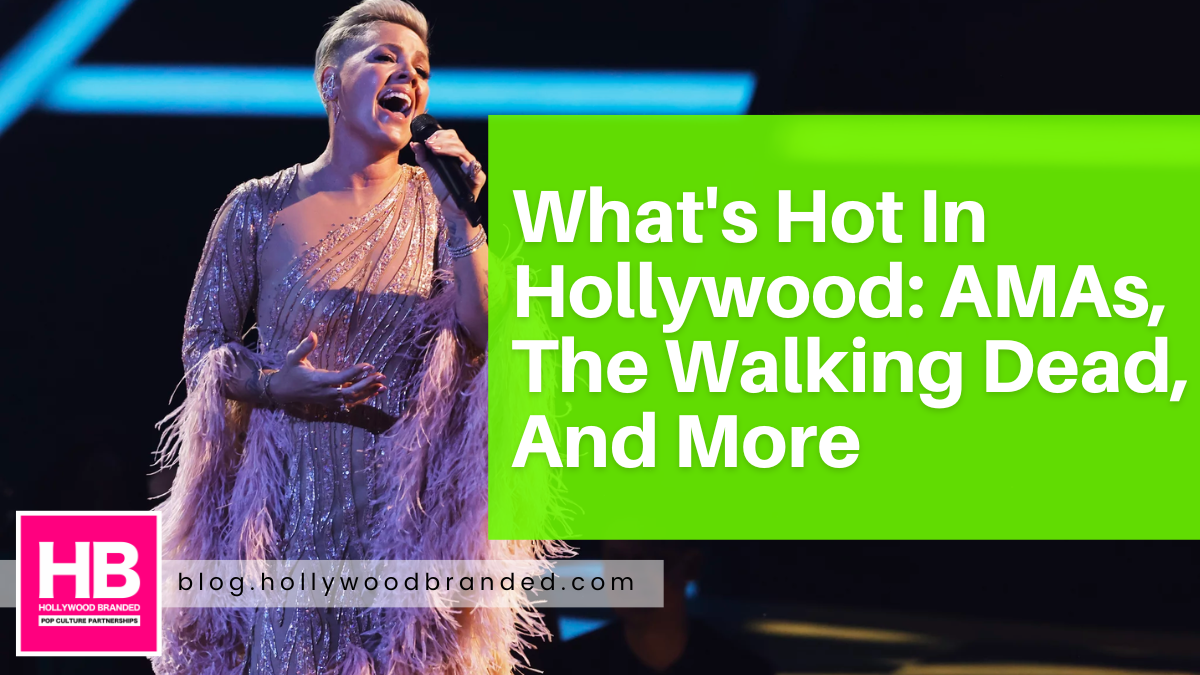 The Rollerskate May Become This Year's Trending Holiday Gift

If you have memories that go waaaay back to 2000, you know the music artist P!NK, and if you are on the younger side, you are about to get to know her as she's making her comeback. Two weeks ago, she launched her music video for her song "Never Gonna Not Dance Again" set in the world of a grocery store, where some brands - like Stouffer's -  won big.

In 2 weeks, the video has been watched almost 6 million times - and will continue to grow in the months ahead to the tens of millions. She has another music video shooting this month with opportunities for brands interested in leveraging her pop culture power.

The American Music Awards (AMAs) is the world’s largest fan-voted award show and pays tribute to today’s most influential and iconic artists. Airing in over 200 countries, the show has run since 1973. For the opener, Pink roller skated à la her music video through the streets until she entered the studio with her entourage of performers. All on rollerskates. I admit it made me think wistfully of rounding up my rollerblades or pulling on a pair of rollerskates. My bet is it's going to make a lot of people do more than just be wistful and actually put on a pair, thus my new holiday gift suggestion!

Another artist who performed (and is a GIANT in Brazil) is in the midst of her US and global break-out this year. Anitta is one you should be keeping your eyes on. She's incredibly brandable, and her fifth album, Versions of Me, is a rare example of a music project that includes songs in English, Spanish and Portuguese.

SHEIN was one of the evening's sponsors and created a style guide to Anitta's performance on their website and also had a massive wall branding moment as she performed. As an official sponsor,  Shein will be exceptionally happy as Anitta won Favorite Female Latin Artist.

There were a handful of standouts as far as artist style for most memorable to me. The purple spike suit of Machine Gun Kelly, who once again rocked, getting attention and an award. Måneskin's garter pantsuits were a double looker with the entire band in their newest creation of a pants look. It was attention-getting. Pink had multiple clothing changes, and her 1950s boudoir-styled feather creation with sequins was her most glamorous.  Anitta, Bebe Rehxa, Meghan Trainor, Taylor Swift, Kelly Rowland, Carrie Underwood, and Dove Cameron were all standouts on the red carpet.

Even Will Smith's infamous slap heard around the world got included as a lyric sung by Wayan Brady, who, by the way, kicked butt with his very bleeped It's the F'ing AMA's song intro. Brady is incredibly, incredibly talented. A brand endorsement dream come true, actually.

There are few series that pack quite the punch The Walking Dead has done for the last 11 seasons. Through the years, two brands got some major press through product placement in the series when Hyundai Tucson was featured as a getaway car, and a decade-old Mountain Dew was found chilling in a stream, waiting to provide refreshment and the comment: “Is this legit... Mountain Dew? ... I will never stop missing these. I mean, I used to drink this like water back in the day.”

Leveraging the massive eyeballs tuning in to the series finale, AMC created a really cool branded content ad campaign with five brand ads custom created to feature characters who had died in earlier episodes. Four characters, including Milton Mamet (played by Dallas Roberts), Andrea Harrison (Laurie Holden), Rodney (Joe Ando-Hirsh) and Gareth (Andrew West), were cast in ads for Autodesk, Deloitte, DoorDash, MNTN, and Ring.  Adding in more PR-buzziness, both Ryan Reynold's ad agency Maximum Effort and Jimmy Kimmel's Kimmelot production company (with Dan Sanborn leading) crafted the ad campaign alongside AMC, shooting the five commercials in two days in two locations. Super smart! Consolidated costs of the shoot shared across multiple brands made the entire partnership more affordable to execute - as production shoots themselves can sometimes rival the associated ad campaign. In this case, the true power of the ads is in the live viewing and PR associated, leaving less time to amortize the content, although the commercials are shot to be relevant for a longer play.

Kim Granito, EVP of Content Room and integrated marketing for AMC Networks, said the effort to lean into the lore of The Walking Dead “is one of the many ways we can contextually bring a brand to life.”

“Ads should be fun,” Reynolds said. “The Walking Dead has generated more cultural conversation over the last decade than any other property and we wanted to honor that by bringing a few characters back from the dead in some fun contextual ads.” Commercials, he added, “can be a part of the cultural conversation as they once so frequently were. They just need a little more love, attention and mischief.”

Way to go, AMC! Great job in crafting content that is not only engaging to viewers but welcomed with open arms. And way to go, MNTN, the connected-TV advertising company that also ran an ad targeted to brands and the agencies that advertise them. They own Ryan Reynolds' Maximum Effort creative agency. Which explains Ryan's cameo and voiceover in their ad campaign. What was most interesting though to me was that it was a B2B ad campaign on network TV targeting brands and agencies that advertise them - not consumers. That's something that is not done nearly often enough. 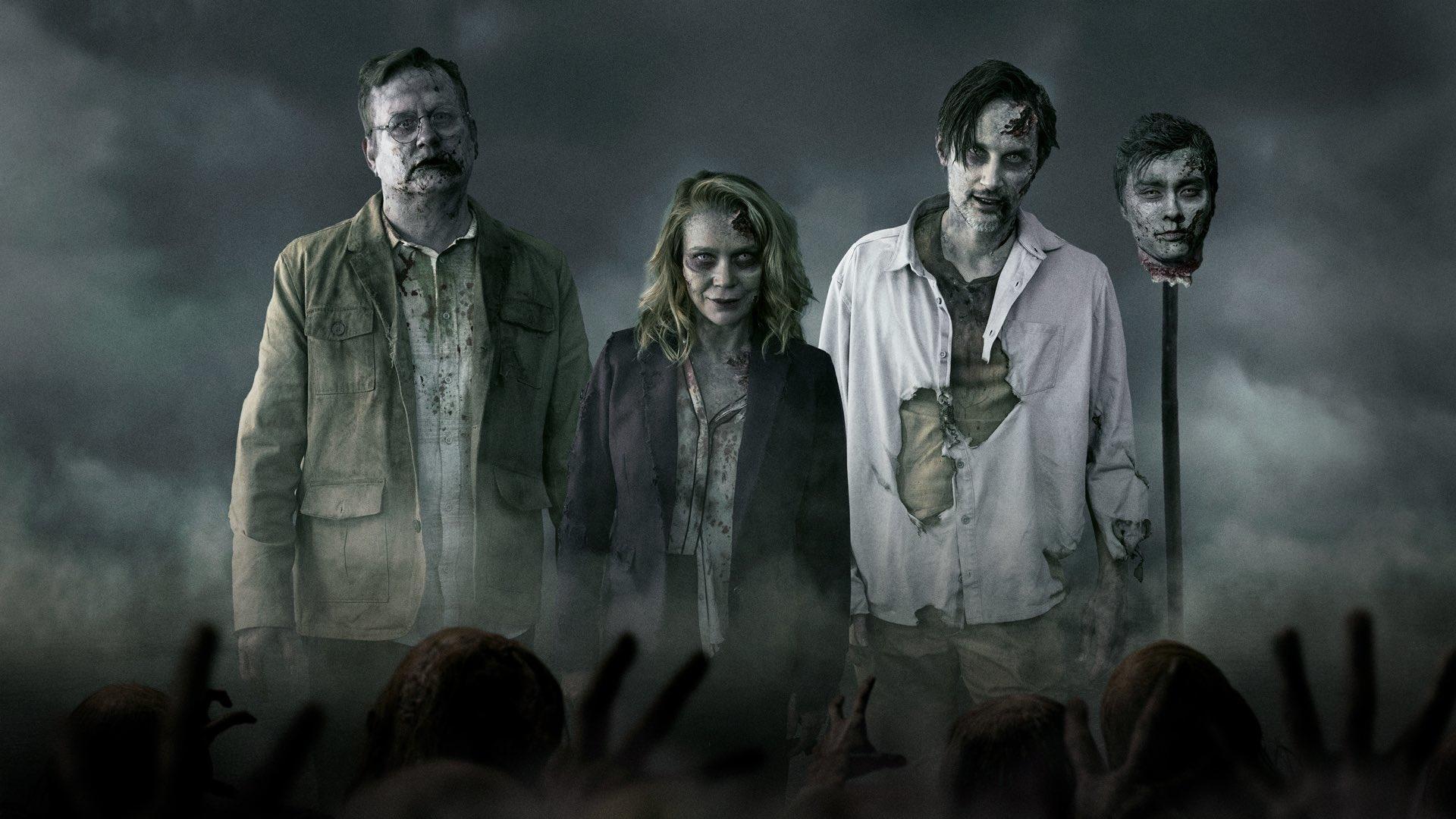 The World Loves The Wild West

Yellowstone's premier this last week was a record-breaker for Paramount.  Almost 16 million viewers tuned in just 3 days.  That's big news for Paramount Network, which is trying to get noticed and establish itself as a serious contender in the streaming wars. The series debut was the most-watched show across all of TV in 2022 and the most-watched cable premiere since 2017's The Walking Dead per Deadline. The show premiered in 2021 at 14.7 million and increased by 6% to 15.7 million this year.

I'm not the only one out there with fond memories of tadpoles, horses, and the conversational y'all.

All I have to say is, Budweiser, your tweet nailed it with your pithy comment. Too bad your legal made you take it down as they explore how to get back some of that $75 million FIFA sponsorship money spent to sell your beer in the games. You know. The games that won't allow alcohol to be drunk. Soccer fans love their beer so much that stadiums in France and Scotland don't sell it to keep the fighting down.

You Voted. The Results Are In.

The Fate of Adida's Non-Yeezy Brand Future: How will fans of a brand, where the brand was built from being leveraged from a celebrity endorsement, whose fans are highly loyal to no matter what he seems to do or say, going to react?

The winner... that the new line is going to tank, followed by the fact that they still are going to need a celebrity to shill the product to get it off the shelves and keep buyer demand up.

Music videos offer one of the fastest turn-around times from script to screen in entertainment marketing. This is terrific for brands that are at the ready – and very difficult for brands who need more time to evaluate and consider. To ensure the ability to move quickly when that right fit comes resounding over the airwaves, brand managers should put a plan in place with these 10 steps to create a successful music video partnership.

Here's a refresher on a prior blog I wrote on how to get your brand involved in music videos.

We LOVE music videos. The brands who are most successful are the ones that do not tend to overthink it. What you have to remember is that you are working with creative artists who need money to get their music videos made. Labels may front all or a portion of their music video costs, but the artist is going to have to pay that back before they get royalties on their music. That's where brands can win.

You need to be able to say yes quickly and not have too many constraints in place. Don't ask for x seconds. Ask for a clear and identifiable logo and a social post. Determine if you want to pay for an in-feed or a story. There can be a price difference of tens of thousands of dollars. You may even find that the social post costs MORE than the music video integration.

Give parameters. Make it achievable.  Artists are focused on, well, what their name is - creating art. Not on creating a complicated brand partnership. The power of the music video, however is that your brand is baked into the content now - and in future years as the artist continues to grow and their video impressions grow too - with your brand featured all the way. When a brand becomes part of a music video or lyrics of a song, the brand partnership is there forever. Consumers cannot simply skip the advertisement and are more likely to trust the opinion of the artist promoting the brand in the song or video. Music and brand partnerships are here to stay and will only continue to grow and further develop into extremely strategic business models.

Want to check out other blogs written by our team about the power of music, product placement, partnerships, and marketing? Check them out below: