Travis Scott is the Next... Michael Jordan?

Travis Scott’s latest collaboration is shaping up to be a match made in burger paradise. Collaborating on everything from a limited-edition meal option to countless merch, the partnership is one of the biggest that McDonald’s has done recently, a much-needed risk to take in this COVID-landscape. The last time McDonald’s partnered with a celebrity on a limited-edition meal was with Michael Jordan back in 1992.

It’s a bit of an unlikely collaboration that not all McDonald’s higher ups were enthusiastic about, but we’re sure they’re rethinking their opinions now. Garnering TONS of press, sold-out merch, and reaching that priceless Gen-Z audience, McDonald’s took a risk and it paid off. In this blog, Hollywood Branded digs deeps into Travis Scott’s multi-layered partnership with McDonald’s. 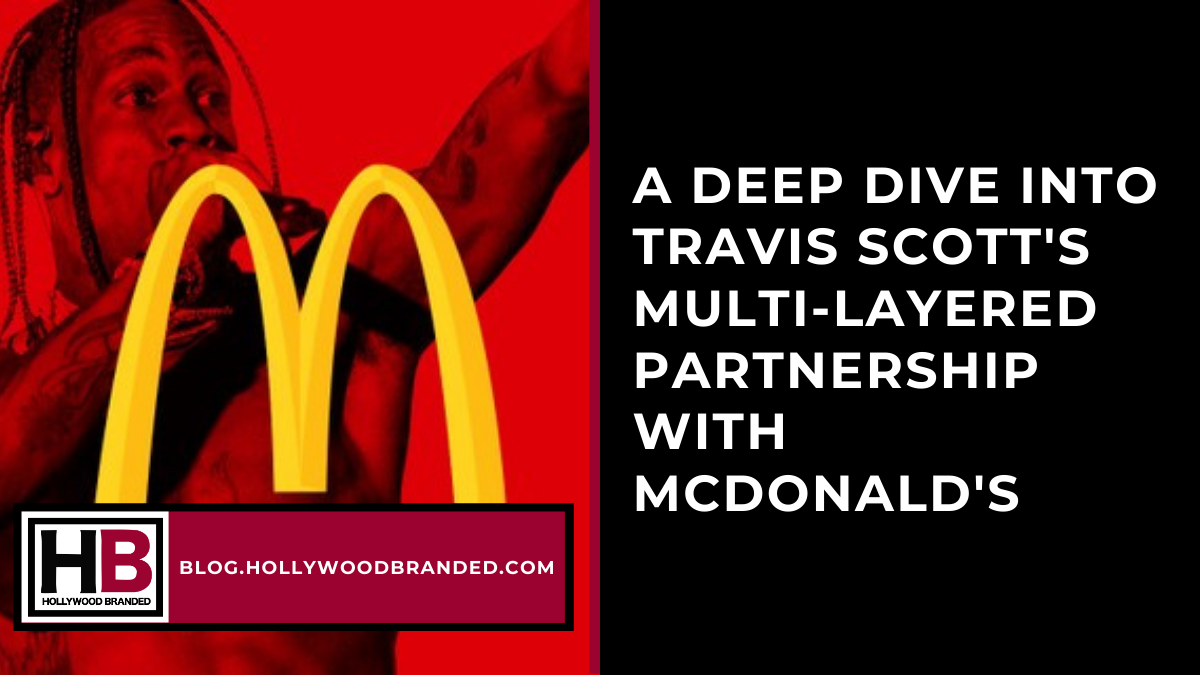 Starting with the crux of this partnership and what’s ultimately going to bring traffic to the restaurant is the “new” limited-edition Travis Scott Meal. The meal, coming in at $6 is a Quarter Pounder with cheese, bacon, and lettuce, medium fries with BBQ Sauce, and a Sprite (that’s supposed to come with “extra ice,” which makes perfect sense given the hip hop connection). It's Scott’s all-time favorite McDonald’s meal.

Now the business beauty of this meal is that there’s nothing new about it. Creating new meals at establishments as large as McDonald’s is often a tedious and expensive task due to its need for new ingredients and training the staff on how to prepare. And this is the opposite of what McDonald’s wants to be doing right now. In fact, due to the pandemic, the fast food giant has cut down their menu, no longer offering salads and all-day breakfasts, changes that franchise owners are praying stays.

With over 13,000 locations in the US and 95% of them owned by franchisees, these are logistics that McDonald’s needs to take into account when establishing new partnerships. Luckily for them, the Travis Scott Meal isn’t a new meal at all, but because it’s a limited-edition celebrity collaboration available for one month only (September 8th – October 4th, 2020), it’s turned out to be a fool-proof way of creating the buzz without adding tremendous cost. Customers are excited and intrigued, but in reality, there’s nothing new about it outside of Travis Scott’s name being attached to it – it’s a win, win for the brand. And for the artist.

We all had the Happy Meal toys that lasted for about an hour before it became another casualty of a child’s short attention span. A couple of us even had a McDonald’s branded coffee mug or water glass that they truly have no idea of its origins, but it has lingered in the kitchen for years. And now, the brand and Travis Scott are taking this paraphernalia to a whole new level.

Releasing an INSANE amount of co-branded items, the artist collaborated with McDonald’s on just about everything from co-branded t-shirts, to shorts, to indoor rugs (huh??), to life-size cutouts and a chicken nugget body pillow. These guys really left no stone unturned in the merch department. The vibe of the collection is definitely cool meets vintage, comprised of pieces that make McDonald’s clothing go from basic to streetwear chic. There are over 95 different items that were available for purchase, released daily over the first couple of days of the partnership and EVERY SINGLE THING is sold out. Yes, even the $90 chicken nugget body pillow.

Having had previous successful collaborations with brands like Nike, Saint Laurent, Reese’s Puffs Cereal and Hot Wheels, the crazy success of Scott's merchandise drop is no surprise to his fans. With each partnership more successful than the last, regardless of price point, Travis Scott has emerged as a brand’s dream. It should also be noted that various locations also received custom co-branded uniforms for their employees so that everyone heading to a McDonald’s couldn’t miss this collaboration.

However, some of the McDonald’s franchise owners are pushing back on the partnership. Travis Scott is known for his explicit lyrics, and many of the franchises aren’t comfortable with his face being the driving force of the brand’s latest partnership. Suffice to say, though, that is not stopping McDonald’s customers from stopping by. On the day of its launch, the partnership was the Number 1 trending topic on Twitter.

With 64% of Travis Scott’s social media following being under the age of 24, this is the exact market McDonald’s wants to target. He IS the Gen-Z market. Accessing these audiences is what brands are craving right now, and there’s a delicate dance to do it correctly. The cold hard facts are that, while McDonald’s is one of the most iconic fast food chains in the world, they’re still a brand on the decline. With a global total revenue of around $21 Billion last year relative to $28 Billion in 2013, they need a way to access the youth, and this is it. It’s a cool way of advertising to Gen-Z without the risk of getting cheesy and trying too hard.

Even the best collaboration is useless if nobody knows about it. And it didn’t take much, but McDonald’s and Travis Scott did put some thought into this promotion before the media went haywire, taking care of the rest of the campaign.

The promotion started with a TV spot, featuring an updated version of Scott’s iconic action figure version of himself detailing what’s included in the order. Whether this was a COVID thing, a Travis thing, or a way for McDonald’s to play this partnership as safe as they could, it is noticeable that Travis Scott isn’t IN the TV spot, rather replaced by his action figure. Check out the spot below!

This was followed by a series of streetwear style photos that were found not just all around the press, but on Travis Scott’s IG as well, blasted out to his 32.8MM followers. 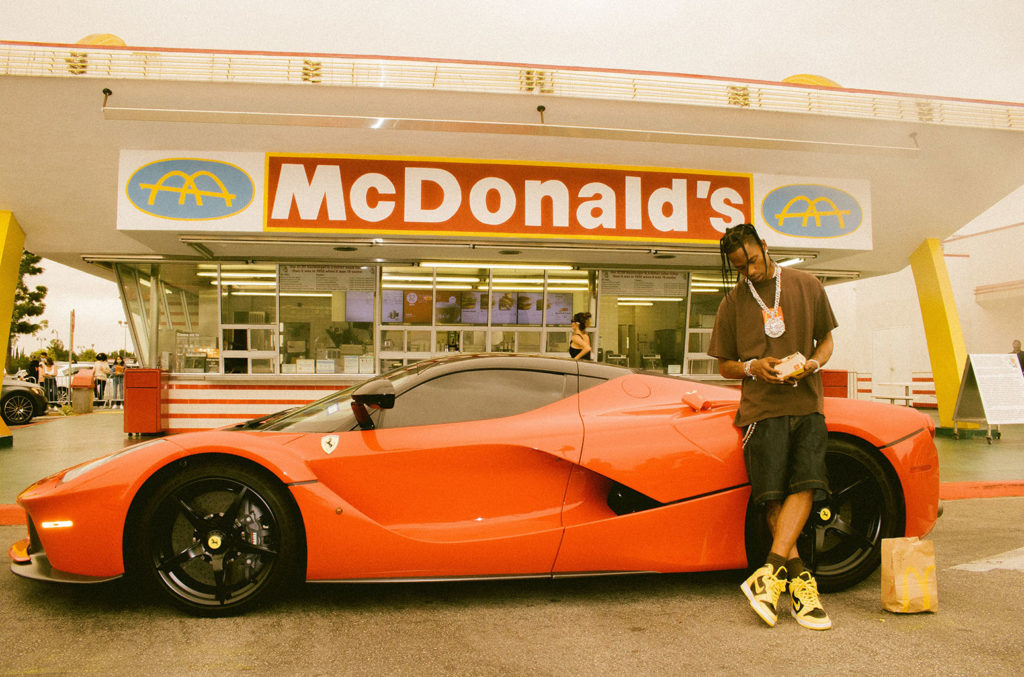 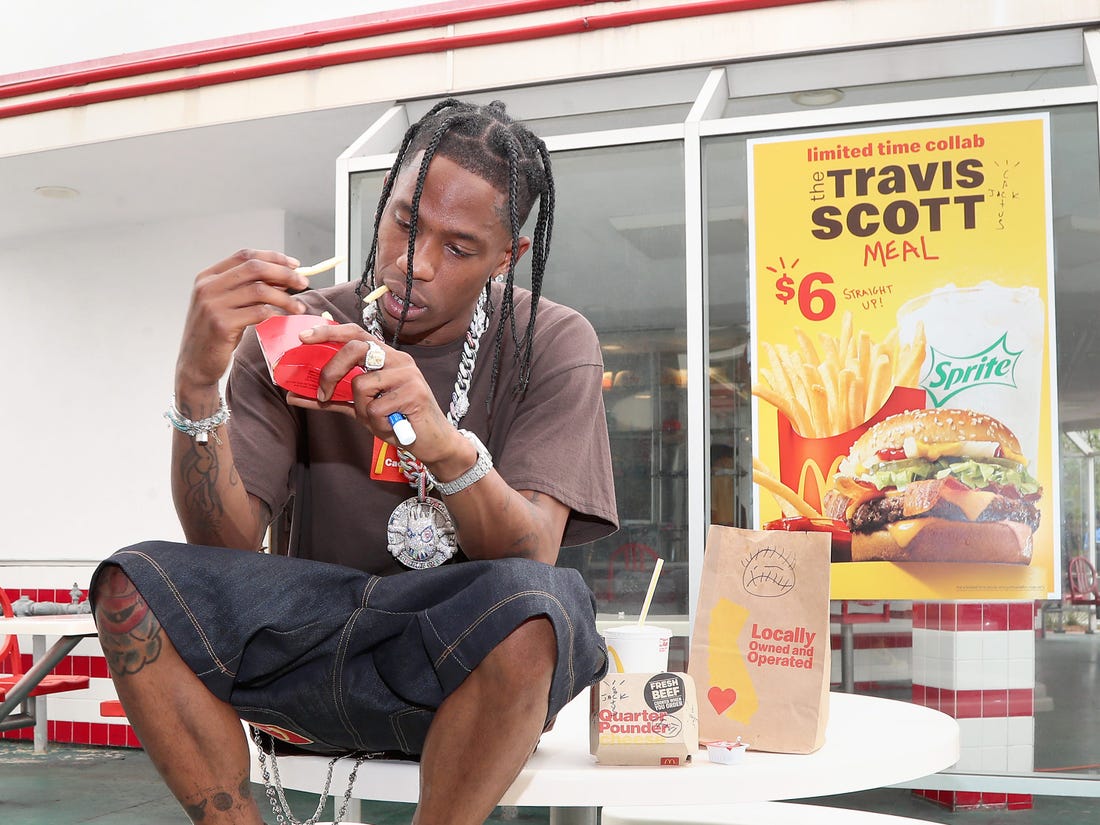 The rapper was also was bombarded by fans at a Downey, CA McDonald’s when he showed up (in his $3MM Ferrari) to surprise fans waiting in line to try out his meal. He went on Instagram Live during this impromptu meet and greet, and though the screenshot is a bit blurry, you can tell how crazy of a scene it was! 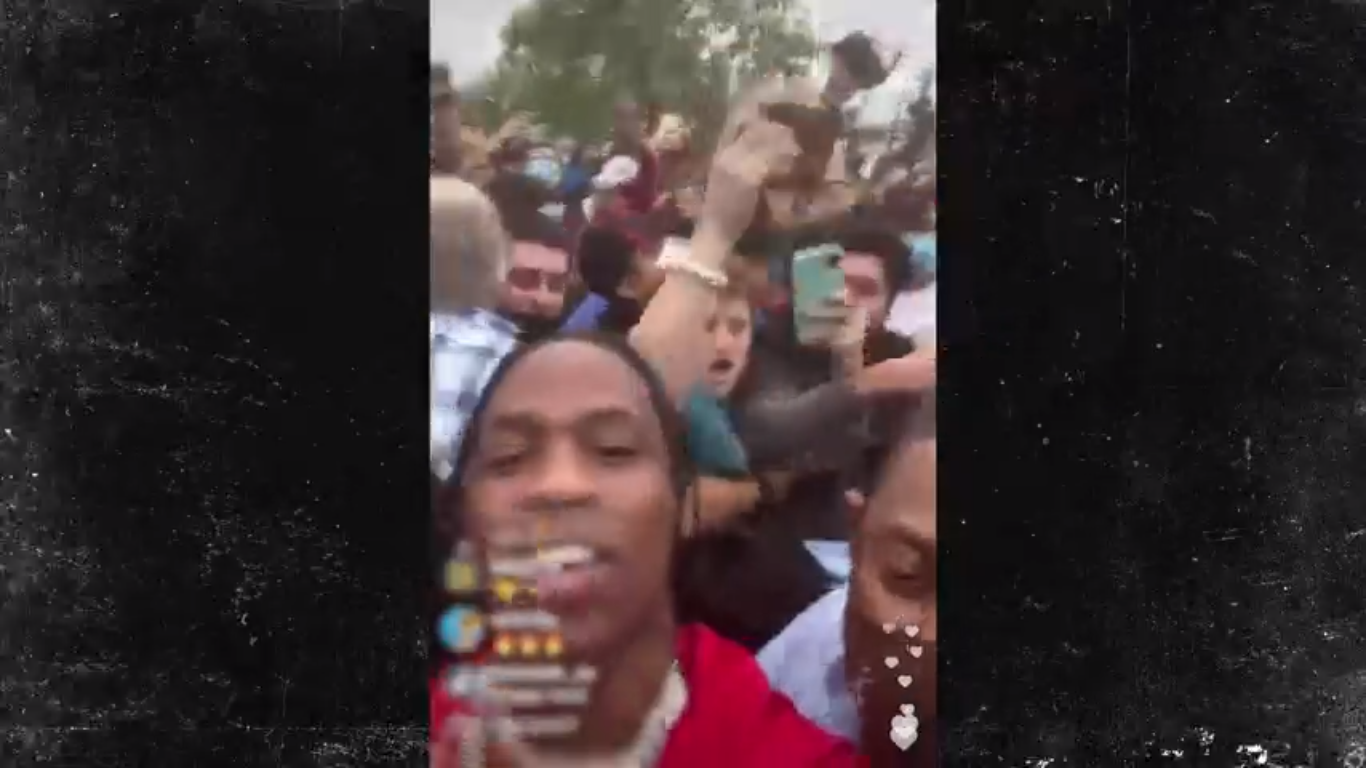 A Burger Worth Bettin' On

McDonald’s certainly took a risk partnering with Travis Scott. His psychedelic style of music blended with his questionable lyrics don’t paint the wholesome picture that their partnership with Michael Jordan did decades ago.

That being said, a wholesome partnership most likely would have never garnered the buzz that Travis Scott did. These riskier partnerships are what’s getting the attention of that very desired Gen-Z and GenZennial audience. So while those franchisees may have been skeptical at first, we’re sure they’re taking that skepticism all the way to the bank.

There Is So Much More To The World Of Celebrity Partnerships!

This is the tip of the iceberg when it comes to celebrity partnerships. Check out some of our other content to learn more!

There is a whole world of celebrity and influencer marketing that Hollywood Branded can help you excel in. We've created an entire school so that brands can familiarize themselves with the industry. Check it out below!