Do you remember the way Don Draper poured his Canadian Club into a glass while thinking about his next big pitch - or problem? We do. And we bet you do too.  And we have the inside scoop as to how it happened.

Don Draper's drink of choice was no accident. Our company worked closely with the team at both Canadian Club and the production team of Mad Men to put together a comprehensive product placement plan that made sense for the brand and fit perfectly into the production.  In this blog, Hollywood Branded shares the case study on the Mad Men Canadian Club integration, and how sales were massively impacted by this whiskey's starring role on TV for liquor brand product placement. 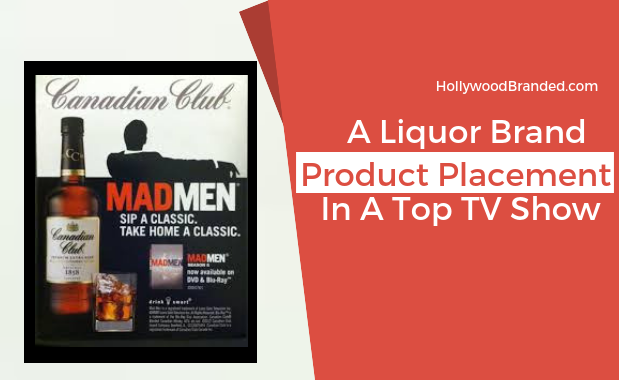 Since opening our doors, our agency has worked with alcohol brands all over the spectrum, from huge alcohol distributor Beam Suntory to small artisan wine company Vina Simpatico. Whether big or small, production companies love alcohol brands as there is almost always a scripted need and a place they can put it in their production.

Whether it's a scruffy cowboy throwing back Jim Beam or a ladies' night where busy housewives relax around a bottle of Menage a Trois wine, Tres Generaciones being tossed back by a group of millennials at a hipster bar, or a Tecate chugged by Hellboy, we have loved working with alcohol brands over these years.

One of our favorite integrations was working with the production team on Mad Men to integrate period-friendly Canadian Club whiskey as Donald Draper's drink of choice on the show. Anyone who is familiar with the series knows just how classy Don Draper is - and just how much he drinks.

The show was looking for a whiskey brand that would fit in the period and would go well with Don Draper's character (played by Jon Hamm)... and after working with Beam for a few years we had the perfect suggestion.

What started as a convenient and organic choice for the production team turned into seasons-long integration that got a lot of attention and saved a brand that had been steadily declining with the years.

We made Canadian Club Don Draper’s drink of choice in Mad Men, and provided a platform to build a national advertising campaign partnership.

Beam Global tasked Hollywood Branded to source and secure television product placement that would catch the attention of the brand’s  core older male demographic while creating a hip engagement to broaden the core consumer to a younger generation for the brand Canadian Club.

Hollywood Branded’s team went well above and beyond the request.  We researched relevant shows, and as part of the overall initiative secured the opportunity to incorporate Canadian Club through the production crew at AMC’s Mad Men for Season 4.  The brand was a natural fit for the show, as whisky was historically the drink of choice for many advertising executives in the heyday of the TV’s time period.   Our team then worked with the client and TV production to design, print – and glue –  historically accurate labels to place on the bottles on the series.

After 17 consecutive years of declining sales, Canadian Club has obtained 4.3% annual sales growth since the debut on Mad Men.  While Beam does not attribute all the sales growth to the TV exposure, the company believes it has reinvigorated popular perceptions of the product.  The AMC hit lends Canadian Club a bit of pop culture cachet.  The exposure  has been crucial for new demographics Canadian Club is trying to reach: younger drinkers, and women. For years, whisky was seen as a tired product more suited to older men, but the popularity of the TV show means the very age of the drink is what makes it hip.

During Season Four alone, Canadian Club appeared on screen over a dozen times with ad exec Don Draper (Jon Hamm) and became a core element to Draper’s character.  The brand became part of the storyline and appears through the final season of the series.  The partnership was such a success for the client that they chose to then raise the bar, and create a national advertising campaign co-promoting the television series through co-branded digital media efforts and drink pouring at Mad Men events.

“It has made a huge impact on the brand,” Tish Harcus, Beam Global’s curator of archives said of the liquor’s TV stardom, which has given an air of excitement to a segment of the liquor industry that hadn’t had much lift in recent years.  “People are talking about it again, and it’s visible to young consumers.  People are looking for authenticity, not just in whisky, but in products overall…These historical periods – we were the brand that was there.”

“We’re very proud to be a part of this series to date. CC was definitely an inherent part of that era and it’s wonderful that the writers and directors have considered to use our brand, bringing the classy CC whisky image across to our mutual consumers.” Don Tullio, Canadian Club’s Brand Ambassado.

Beyond the results for the client, we have to tell you that many of the ad executives we meet with have proudly taken us into their office to show us their own bottle of Canadian Club sitting in a place of honor, that someone bought and gifted to them (or they bought for themselves!) due to the influence of this integration.  That certainly answers the question, “Does product placement work?”

The Mad Men drink of choice – because if you can’t be Don Draper, you can at least drink like him.

Ready To Get Your Brand On Screen?

Read our blog 5 Ways Brand Marketers Secure Product Placement To Increase Sales and check out these blogs on product placement as well:

Read more about entertainment marketing sales success here in some case studies from top films you've likely seen.  And if you are curious to see more from our survey, then download the 2015 survey results here: