All Of The Hits And Misses Of The Met Gala 2022

The First Monday in May

In case your internet was out, The Met Gala, otherwise known as Fashion's Big Night Out, was on Monday. Happening each year on the first Monday in May, The Met Gala is an annual fundraiser for The Metropolitan Museum of Art's Costume Institute. Dressed to the nines, often in themed clothing, the biggest stars of the moment come together for a night that is talked about for days to come.

If you're anything like me, The Met Gala is your personal Super Bowl. You've got the live stream going right at 6:30 pm, you're feverishly refreshing Instagram and Twitter to see who's arriving first, and you're fully prepared to have lots of opinions on the looks, despite having no background in the fashion industry. If this sounds like you, you're in good company! You've come to the right place. In this blog, Hollywood Branded shares the hits and misses of this year's Met Gala. 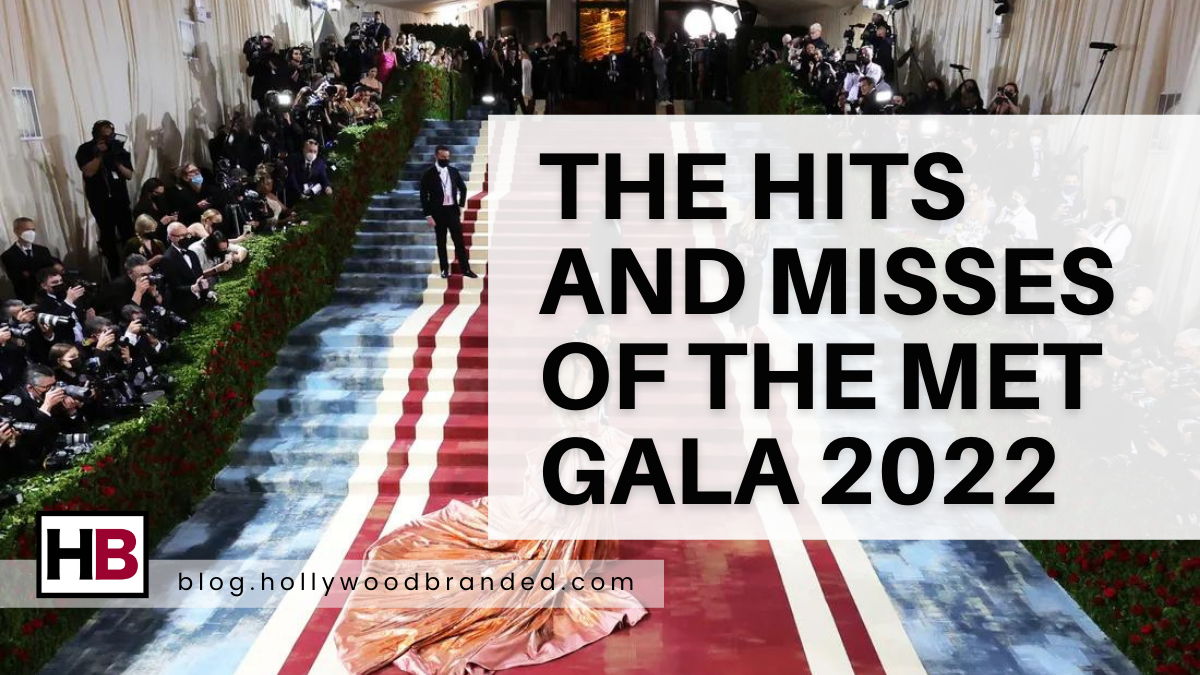 Every year, Anna Wintour, along with the head curator of the MoMA's Costume Institute, Andrew Bolton, is tasked with coming up with the Met Gala's theme. However, this year was a bit different. Because of COVID, last year's Met Gala happened in September, which gave those involved with planning this year's gala less than eight months to plan! To make things a bit easier for themselves, they elected to make last year's gala and this year's a two-parter, following the theme of "In America."

Last year's theme asked attendees to become inspired by America as a Lexicon of Fashion, exploring a "new language of American fashion." This year's theme asked attendees to dig deep into America as an Anthology of Fashion, becoming inspired by historical fashion. The dress code was "gilded glamour, white tie," meaning that attendees should come in attire that is dripping with drama and grandeur.

The most exciting part of the night is learning how different designers interpret (or sometimes, completely ignore) the theme. While fans line up for hours to catch a peek at their favorite celebrity, it can be argued that The Met Gala is more important for the designers. Outside of highly publicized fashion shows, The Met Gala is a surefire way to get your most daring designs in front of the eyes of millions.

While viewers at home more often than not have no background in fashion, they still unapologetically share their opinions online about each and every outfit. The second the first person steps foot on the carpet, live tweets flood the internet, and seemingly no one is safe. Keep reading for a breakdown of some of our favorite and least favorite looks of the night!

If you're anything like me, you've been blissfully unaware of the Met Gala's co-chair duties until this very moment. Just to give you all a refresher, the co-chairs are involved in helping put together the night's guest list, working to put together the menu for the night, and picking out the decor for the gala. This year, Blake Lively was one of the four celebrity co-chairs, and, boy, did she not disappoint. As the first celebrity on the carpet, all eyes were on her, and she took that moment to break the internet. In a gorgeous and intricate Versace Atelier (two-part!!!!) gown, Lively stunned.

Lively started off the carpet in a gorgeous and dramatic copper gown. As she walked up the steps to the museum, the dress transformed into a stunning green and copper look. Lively explained that the dress was an ode to the Statue of Liberty, which was unveiled in the Gilded Age in 1886. The color change in the dress was meant to emulate the oxidation of the monument, and her accessories even paid homage to Lady Liberty! Her partially oxidized tiara boasted the same 7 spikes that Lady Liberty has. 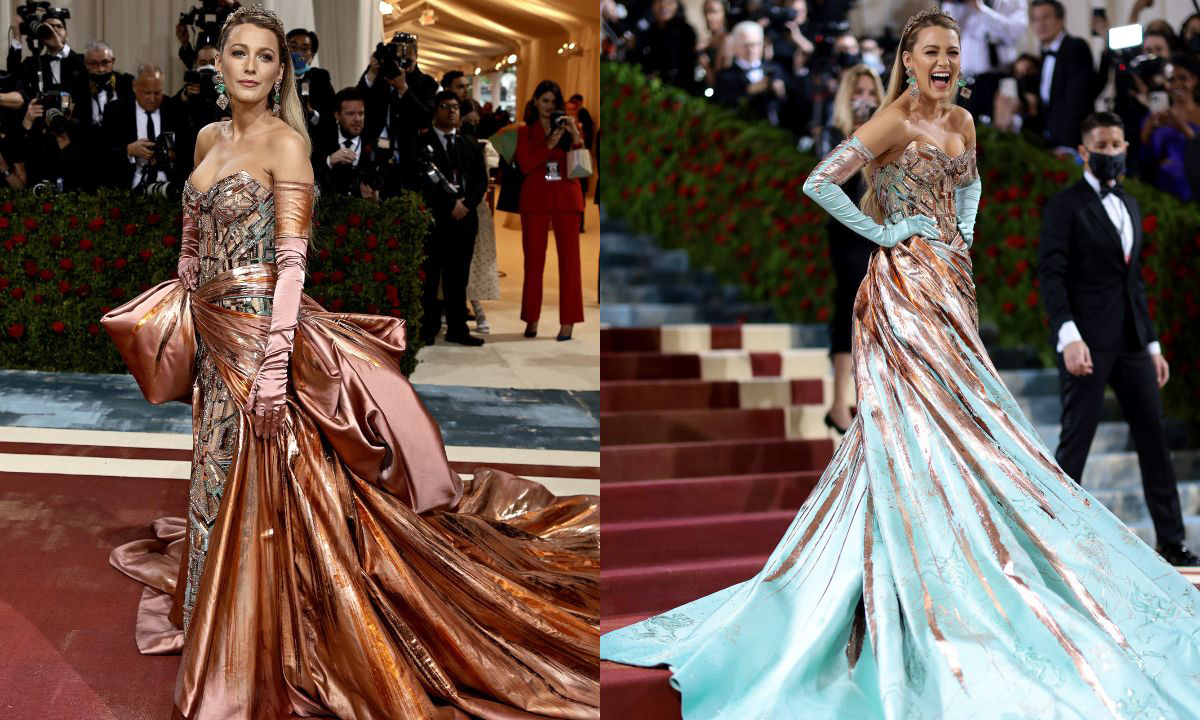 While it was seemingly very difficult to get celebrities to follow the theme of this year's Met Gala (looking at you, Kourtney Kardashian...), some stars shone. The beauty of the Met Gala theme is that it is open to interpretation, and it's always so exciting to see how different designers will interpret the theme! Some designers take it quite literally, while others take it so far that it's difficult to even grasp the inspiration.

One designer and celeb pair that interpreted the theme in an interesting and awe-inspiring way was Dove Cameron and Iris Van Herpen. While at first glance, the dress looks like something that would have been more fitting for the Met's 2016 exhibit of Manus x Machina, after some research, it's actually one of the most on-theme looks of the night! The futuristic, barely-there dress looks like it's heavily inspired by the boning of a typical dress found in the Gilded Age. Speaking to Vanity Fair about her look, Dove explained that the Gilded Age “was all about using new technology and textiles to make grand fashion, grand design, and cutting-edge designs that no one had ever seen before, I think that Iris and I wanted to carry that same intention into tonight and have a modern and futuristic take on the Gilded Age.” Taking the award for the most on-theme look of the night is Billie Eilish. Wearing a Gucci-designed dress, Eilish looked like she had stepped right out of a time machine from the Gilded Age! The stunning green and champagne-colored dress was created using pre-existing materials, making the dress entirely zero-waste!

This isn't the first time Billie has gone sustainable in her looks; almost every red carpet look she has worn for the 2022 award season was upcycled or created with pre-existing materials. Eilish also has her own sustainable clothing line with H&M and even convinced Oscar de la Renta to stop selling fur, as she partnered with the fashion giant at last year's Met Gala. 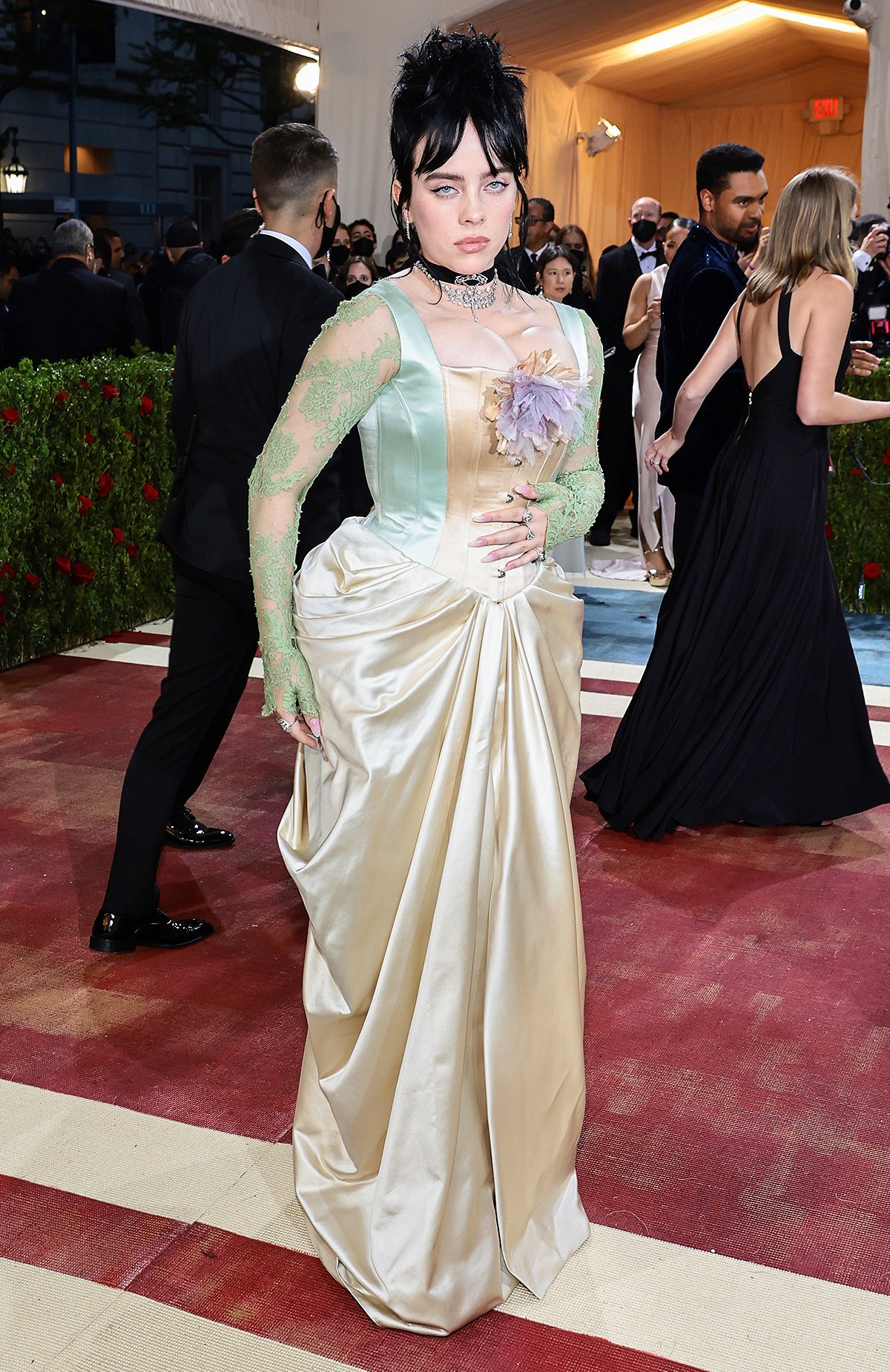 The internet was in quite the frenzy as they saw Riz Ahmed step onto the red carpet - how could he show up to fashion's biggest night wearing an open button-up shirt and a tank top?!? However, fans' started to change their tune when they heard the inspiration behind the look. The casual, understated look, designed by 4S Designs, an innovative brand helmed by Angelo Urrutia, an El Salvadorian immigrant, is inspired by the "Average American" during the Gilded Age. In a red carpet interview, Ahmed explained that the modest look was an homage to "the immigrant workers who kept the Gilded Age going." Lizzo's back, and continues to look good as hell! In a custom, hand-embroidered Thom Browne coat and gown, Lizzo looked absolutely regal. While the look may not be as literal as Billie's when it comes to a look directly inspired by the Gilded Age, the over-the-top look still fit the theme perfectly. The Gilded Age was all about grandeur and wealth - the intricate gold embroidery on Lizzo's coat and her custom gold jewelry (and her gold flute!) was the perfect subtle call-back to the Gilded Age! Oh, Kylie...this look sent the internet into a tizzy, and not in a good way. The Kardashian-Jenner clan are held to an extremely high standard when it comes to red carpet looks, and it seems as though that standard was a bit too high for the Kardashian-Jenner family, as they all missed the mark in one way or another in terms of the Met Gala's theme.

Kylie, however, has to take the cake for one of the least on-theme celebrity of the night. While the Queen of Rap looks incredible, this look missed the mark a bit, in my opinion. It was wildly off-theme (WHAT is with the baseball hat trend on this year's carpet?!), and also didn't fit her properly. The dress' cups were a size too small, so Nicki was fearful of a wardrobe malfunction!

The all-black, over-the-top look was designed by Burberry, with body jewels done by Pat McGrath. Accessorizing with a feathered cape, thick black belt, and a leather baseball hat to match her leather pants, Nicki looked stunning but seemed a bit out of place at this year's Met Gala. One of the more...shocking looks of the night was none other than Cara Delevigne's gold and red ensemble. While Cara is known for taking risks on the red carpet, she took gilded glamour quite literally. Wearing a red tailored jacket and pants designed by Dior Haute Couture with a torso painted gold, the over-the-top look left many a bit confused. Technically she was following the theme; she's about as gilded as you can get! However, many felt the ultra-modern look felt strange as an ode to the Gilded Age. Even though the internet was confused by her look, fans commended her for choosing to not hide her psoriasis under the gold paint. While I commend Sebastian Stan for choosing to do something other than the plain black suit on the red carpet, I can't say I entirely understand this decision. Decked put in an oversized, hot pink suit by Valentino, every aspect of Sebastian's outfit was pink - even down to the socks! Even if the look seemed like it was off-theme, Valentino had to have been inspired by something when it comes to hot pink; Glenn Close wore a suit of the exact same hue! Everyone's favorite couple made their debut at the Met Gala this year and, honestly, I was disappointed. Kourtney described her Thom Browne-designed piece as "an extension of" her fiance's look. In a press release, Thom Browne explained that Kardashian’s look was created “using the tailored pieces that Travis Barker wears reconstructed to showcase her individuality with exposed construction details.” While the sentiment was sweet, it fell a bit flat. Not only did Kourtney, herself, admit that the outfit wasn't on theme, but it was also not the most flattering. Kourtney's outfit wasn't the most flattering; the exposed raw muslin made the skirt seem almost unfinished and hit Kourtney at an awkward angle. That said, the two lovebirds seemed to have made the most of their very first Met Gala! 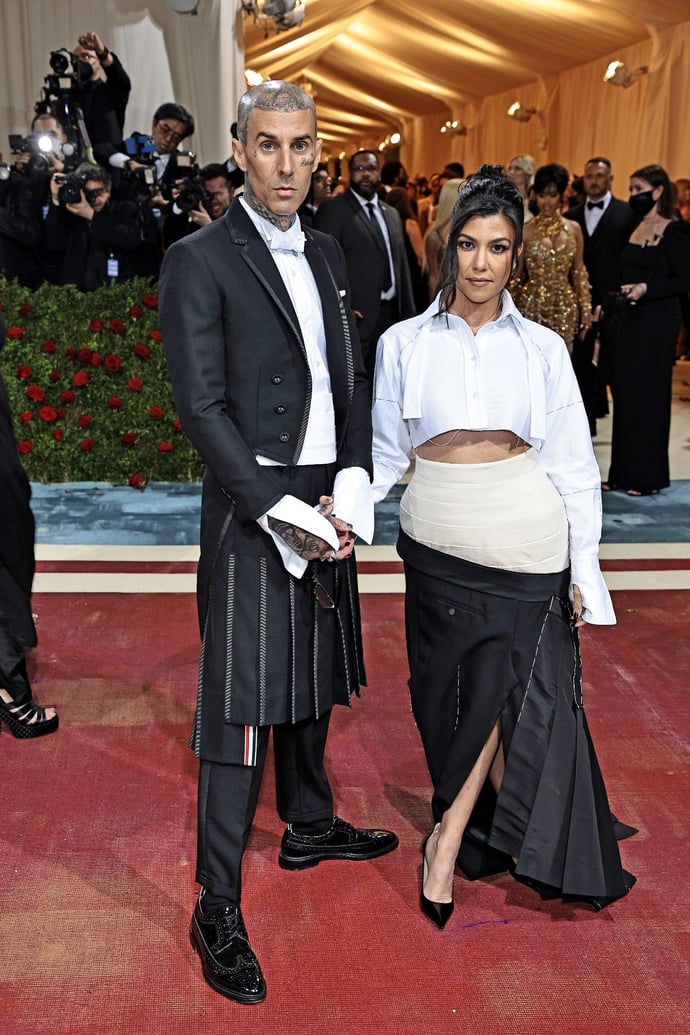 The dress heard 'round the world! In a move as iconic as herself, Kim Kardashian showed up to the Met wearing Hollywood Royalty. After nearly 60 years of being tucked away in the Ripley's Believe it Or Not Museum, Kim Kardashian borrowed Marilyn Monroe's iconic Jean Louise-designed gown, worn during Marilyn's rendition of "Happy Birthday, Mr. President" in celebration of JFK's 45th birthday.

The controversial dress is still making headlines; from bashing Kim for contributing to toxic diet culture, to praising her for being a modern-day Marilyn, Kim once again proves to us all that everything she does will be iconic. Can't get enough of all things fashion and entertainment? Be sure to take a deep-dive into our blog! Check out the blogs below to learn more.