Addison Sterling Rae, one of the first top rising stars of TikTok when the platform first released, is now the highest paid earning person on the app. Her fame stems from having over 60 million followers on TikTok, a song (“Addison Rae” by Kid LAROI), her own apparel and makeup line, and more.

Last year, Addison generated $5 million from social media, and since then she has only become more well-known. In this blog, Hollywood Branded provides a brand guide to Addison Rae’s sponsored posts, and how brands could benefit from partnering with huge TikTok stars like her. 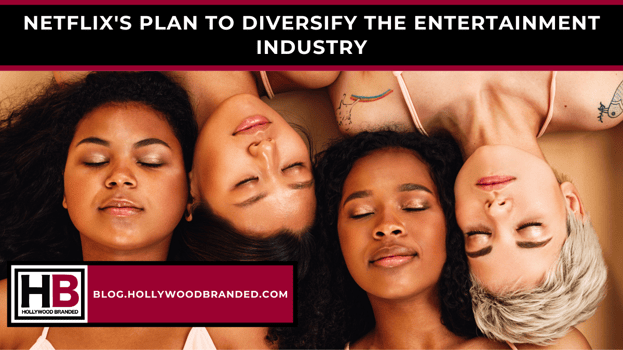 Who is Addison Rae?

Addison Rae is a TikTok celebrity from Louisiana, who joined the rising platform last fall. She went from living an average college life and then quickly blew up due to her dancing videos, especially ones featuring her mom. In December she decided to leave Louisiana State University and move to LA to further grow her brand. While in LA, she joined the Hype House, a popular TikTok group of famous people who consistently create viral videos.

Addison Rae is undoubtably one of the most well-known names on TikTok today, and rightly so; she has the second biggest following on TikTok, right behind Charli D'Amelio. Due to her extreme popularity, brands have endorsed and created partnerships with her, and she earns about $14,500 per sponsored post on social media.

Due, to Addison Rae’s huge following behind her own personal brand, it makes sense that she created her own clothing line named, “Addison.” Monetizing this brand on her feed is easy, because it symbolizes everything she stands for, so of course people are going to feel persuaded to buy it. The clothes in her collection resemble items that Addison would wear on her own, and because so many people want to be like her, her line has been a huge success!

The way Addison introduced her line was simply creating a post on Instagram teasing the new account, @shopaddisonrae, and fans were hooked instantly. Her shop is available on @shopaddisonrae; channel your inner Addison Rae and become a bad “bleep” like her! 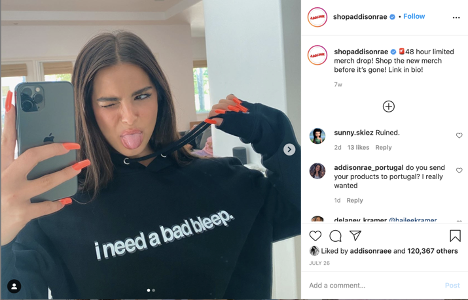 At this point it may seem like Addison Rae is covering her tracks in all aspects of the industry because not only does she have her own clothing line, but she recently launched a makeup line, ITEM BEAUTY. SO, not only can Addison’s fans dress like her, but now they can do the same makeup looks as her, as well.

ITEM BEAUTY is a clean, vegan and cruelty-free makeup line, in partnership with Madeby Collective. Addison explained that “when I think about beauty and what’s important to me, it’s [about] putting something on my face that I can feel good about.” Not many posts have been made about her makeup line, but let’s be honest, all Addison needs to do is post it once and her loyal fans will buy the products. 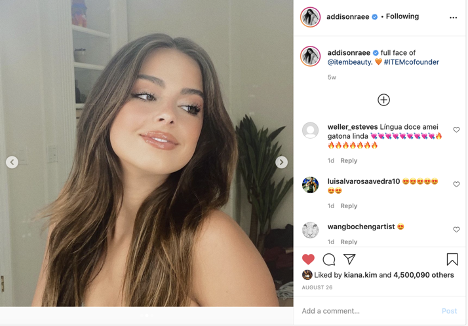 Addison is also the new face of American Eagle with their new campaign, #AExME. The Back to School 2020 ads features the brand’s first-ever virtually-produced shoot, due to the coronavirus pandemic. American Eagle has been around since 1977, providing many styles and assortments of specialty apparel and notably jeans that offer women and men the room for self-expression and the chance to embrace everyone’s differences. Their campaign #AExME stems from their mission statement and wanted to show off “everyday” kids, who all share a passion for dance, inspired by TikTok, to be part of the back to school launch.

“I have been wearing American Eagle jeans for as long as I can remember, so being a part of the back to school campaign felt authentic to my real style,” said Addison Rae. “AE understands what my generation wants, and I love how the brand empowers kids to express themselves, which for me is through music and dance.” 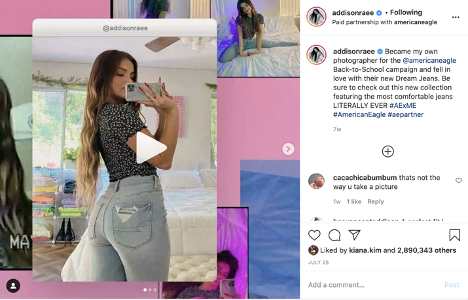 It comes as no surprise that Addison has built a close relationship to one of the most well-known celebrity families in the world, The Kardashians. Long story short, Addison caught the attention of Kourtney’s son Mason Disick, a frequent TikTok user, and the rest is history. Addison and Kourtney have been seen posing in sexy bikini pictures by the pool together and avidly posting their close, but rather wide age-gapped friendship all over Instagram. Celebrity meet ups or collaborations are extremely popular, but these two have been utilizing each other’s own fame and following to their advantage.

Coincidentally, Addison is now the face of Kim Kardashian’s shapewear line SKIMS, for their 1-year anniversary campaign. The Kardashians are brilliant in marketing their brand, that whether or not it was strategically planned or not, they scooped up Addison at the perfect time and are utilizing her popularity to grow their brand and, naturally, this helps Addison as well. 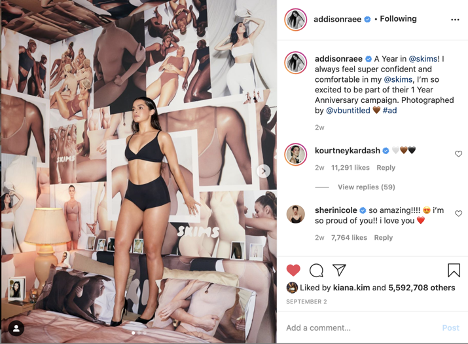 FashionNova is one of the top online fashion stores for women and relies heavily on influencers to market and advertise their clothes all over social media. Stars like Kendall Jenner, Cardi B, and Adrienne Bailon have posed in FashionNova clothing, which makes the brand wildly more popular to the public. Addison Rae is another A-list star who is now posting photos in her FashionNova clothing and with the extreme popularity she has with Gen Z, Addison has no doubt generated sales for this clothing company. 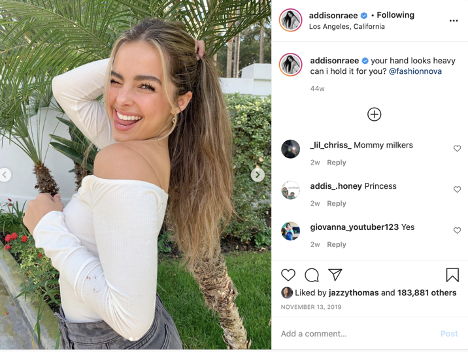 The Modern Break Up - The Book

With all the drama going on in the Hype House, there have been rumors going around about Addison and Bryce Hall, her ex-boyfriend, regarding whether or not they are truly broken up, just friends, or secretly together. Regardless of what is truly going on, Addison is seen posing with this book on her bed and part of the caption says, “So relatable.”

The Modern Break Up book is a novel about love in this day and age and the trials and tribulations people go through while dating in these times. This could be insinuating something about her very public breakup with Bryce or just pure advertisement, but I will leave that up for you to decide.

Even though Addison Rae has her own line of clothing, that does not stop clothing brands from wanting her to model their clothes for exposure. I mean, you would be crazy to not want one of the most popular social media stars to wear your clothing, and to add she makes great content.

Iamkoko.LA is a custom-made vintage line that has some of the hottest celebs modeling their clothes all over Instagram. This was one of the first major brands Addison visibly created a partnership with back in March and even since then she has grown in fame tremendously, so no doubt Iamkoko.LA is grateful and lucky to her posting their cute clothes. 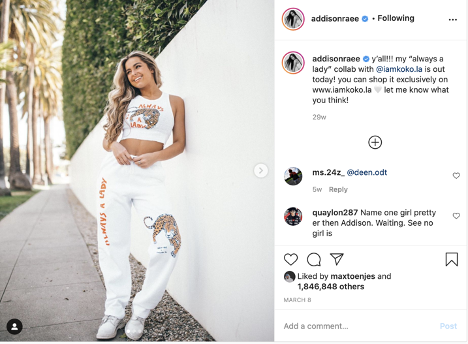 Ready To Work With A Celebrity Social Influencer?

Addison Rae has taken the world by storm from being a normal college student to being one of the highest trending social media stars today, casually hanging with Kourtney Kardashian by the pool. Many people don’t understand how she did it, but her fans clearly don’t care because with the amount of views, likes, and followers she has across all her social platforms, she grabs peoples’ attention and that is why brands want to work with someone like her.

Lucky for you, we have so much influencer #content in our library. Check out these blogs for even more about influencers who are doing it right.

Interested in learning the ins and outs of making Influencer and Celebrity Marketing work? Access Our Full-Length Videos, Transcripts, Audio Files Infographics & More!! Hollywood Branded's Influencer Marketing School advances your influencer marketing game. These courses are for brand and agency marketers to provide insight into how influencer marketing strategies work, and the best practices and strategies to make them do so. Just click the image below!