The Mecca Of Regulation Free Advertising

If you are a cannabis brand, it's hard to get the word out about your product line in a meaningful way where you control the messaging.  Many states refuse to allow cannabis brands to buy TV, print or digital media.  And Facebook, Twitter and Instagram have put in major restrictions limiting the ability for cannabis brands to target individuals and pay for ads.

Yet cannabis is one of the fastest growing markets, and in order to survive, cannabis brands have to find a way to stand out and gain awareness.  And if you are told you can't advertise, that's a pretty hard situation to be in.  Yet there is way - a very great way - for these brands to grab consumers attention.  How? By becoming part of other people's content, specifically through Product Placement.  In this blog, Hollywood Branded is going to discuss how cannabis brands have used Product Placement to partner with television, film and music content over the years, and share our infographic on cannabis product placement. 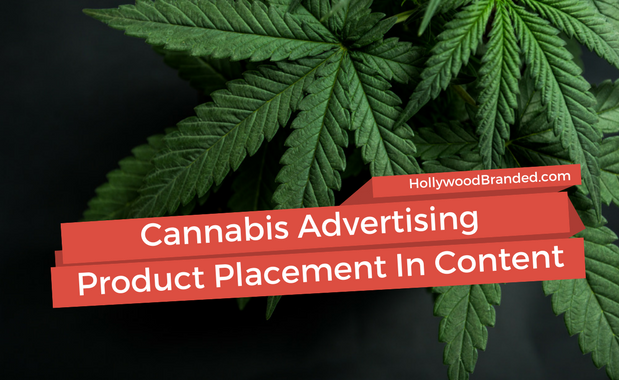 Alternative Advertising For A Mainstream Brand

Cannabis on screen is no longer about risk takers and hippie characters.  It has transcended that social bar with the legalization across states, and especially in the content capitol of the world - California.  With the new laws of January 2018 making it legal to purchase cannabis in California, the film and TV content creators are absolutely guaranteed to embrace the storyline of the hipness of marijuana.

For years, cannabis has played a role in movies - from millennial driven Fast Times At Ridgemont High, Dazed And Confused, Dude Where's My Car, Pineapple Express or Harry and Kumar Go To White Castle or the middle aged The Big Lebowski, Super Troopers, or anything Cheech & Chong. But it was always the exception, and not the norm of the scene.  And now, it's spreading its buds to content and storylines everywhere, and providing a modern take to stoner comedies and dramas.

Recreational use of cannabis is becoming more mainstream and accepted as legalization continues on a state level.  Its' appearance in entertainment has become more common as well over the years.  And of course with social influencer partnerships as well - be sure to check out the blog we wrote Cannabis Celebrity & Influencer Marketing to learn about successful cannabis influencer brand partnerships and how your brand can benefit!

One of the earliest ways cannabis brands began to stand out and market themselves has been through music artist partnerships.  From becoming part of a song lyric, to being featured in a music video, music has connected cannabis brands to very targeted, hip and millennial audiences.

Pretty much any hip hop or rap music video is going to have an opportunity nowadays to feature a cannabis brand. Yes, there are exceptions, but this market more than any other has seized the benefits of cannabis and promoted brands authentically.  Just take a look at the in-your-face cannabis starring roles with Wiz Khalifa’s “Still Blazin”, Afroman’s “Because I Got High” and Kid Cudi’s “Cannabis”.  But that doesn’t mean there aren’t other genres out there with just as great opportunities.

The genre of choice has been hip hop, but cannabis brands should take note that other genres, such as country and pop and rock, offer phenomenally strong opportunities to engage with those artists' fan bases.  There are music artists who are cannabis friendly and who are more than willing to incorporate your brand in their songs or in their music videos.

And then there is television. The fastest way a cannabis brand can get on air, as TV shows typically shoot and then air within 3 months or so, unlike feature films which range from 12 to 18 months.  TV offers those stoner comedy series, but to a more diverse audience, grabbing both men and women’s attention with shows like Workaholics, Broad City, That 70’s Show and Trailer Park Boys.

And beyond stoner TV are cannabis-centered storylines on hit shows like Weeds, Mary + Jane, High Maintenance, Humboldt, Hollyweed and Disjointed.  These plotlines revolve around the business and daily world of cannabis, and as Hollywood creates content based on reality and what is in the media, even more TV shows are on the horizon across TV networks, and which will continue to broaden and evolve as no longer will the weed storyline be subjugated to a paid cable or late night time slot as it becomes even more mainstream.

And then of course there are TV shows and web series that have very specific cannabis plotlines around other niche markets – like food, with Martha & Snoop’s Potluck Dinner Party and Bong Appetit.  Or web series like Cannabis Mom’s Club and Growing Up.

And while not TV... there are also plenty of podcasts where cannabis plays a major role, like Getting Doug With High and High Holidaze or opportunities to be interwoven into the conversation in so many other podcasts as welL!  Really… the content opportunities for cannabis brands is enormous.

Hey - make sure you check out Martha Stewart's foray into celebrity endorsements with Jack In The Box, a brand that has absolutely jumped on the marketing opportunity to grab late night stoners who have the munchies.  We wrote this blog Celebrity Endorsements For Fast Food that you should check out!

When you think of feature films and cannabis, the first thing likely to come to mind are stoner comedy films.  I mean, come on – it’s a natural fit!  Stoner films are a subgenre of comedy films where much of the plot revolves around the use of cannabis.  Typically these movies show cannabis use in a comic and positive fashion and acts as one of the main themes of films.  When our team speaks with cannabis brands, without fail, the majority say they would have loved to have been in Harold and Kumar Go To White Castle, Ted or Dude Where’s My Car.  And those types of films are absolutely perfect for cannabis brands seeking that millennial male (and female… but let’s face it – more male) demographic.  And there are many more of those films on the horizon just waiting to go into production.  It’s a cannabis brand marketer’s dream.

Stoner comedies aren’t a new phenomena. In fact, the 1970’s and 1980’s are what really brought cannabis to the big screen with Cheech and Chong and Fast Times At Ridgemont High.  This led to films like Dazed and Confused, Half Baked, Dude Where’s My Car, How High, Harold And Kumar Go To White Castle (yummm feeling the munchies yet?), Pineapple Express, Your Highnes, Ted (and Ted II), This Is The End (and THAT was a crazy movie, wasn’t it!), Kid Cannabis and American Ultra.  Just wait… there are plenty more films that will be produced as stoner comedies because the fact is, they just do so well at the box office.

And then there are the other films. The non stoner comedies. The ones that appeal to all ages. And the ones that are going to prove to be one of the best ways for cannabis marketers to truly engage with those outside the box cannabis users. The everyday men and women who are the reason why state legislation is allowing cannabis to become legalized.  You know, the rest of the world of cannabis users – and the largest growing market that cannabis brands need to figure out how to market to.

And that’s where film and TV content that is not about stoners, and getting out of your head high can really help cannabis brands.  Movies like 50/50 which involved a cancer patient.  The Social Network where a glimpse into the world of college to adult is featured.  Stuck in Love and Life As We Know It, where real life comes into play.  Or fun filled comedies like We’re The Millers, Neighbors and Knocked Up.

In this infographic, Hollywood Branded delves into the prominent films, TV shows and alternative media forms of the past and present where cannabis has had a starring role. 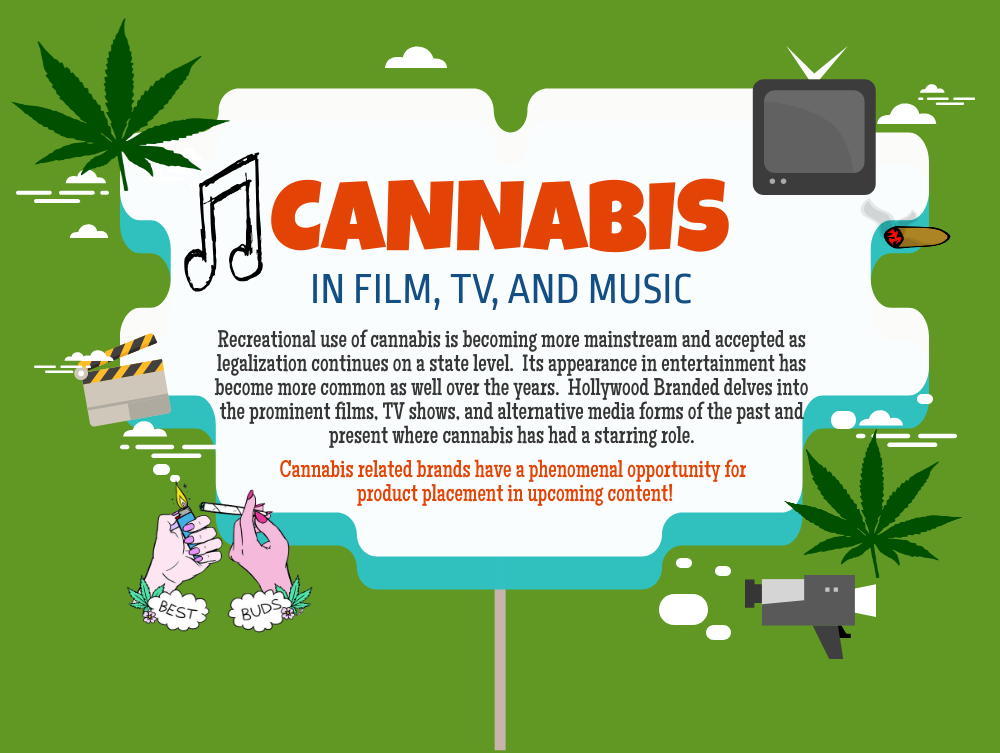 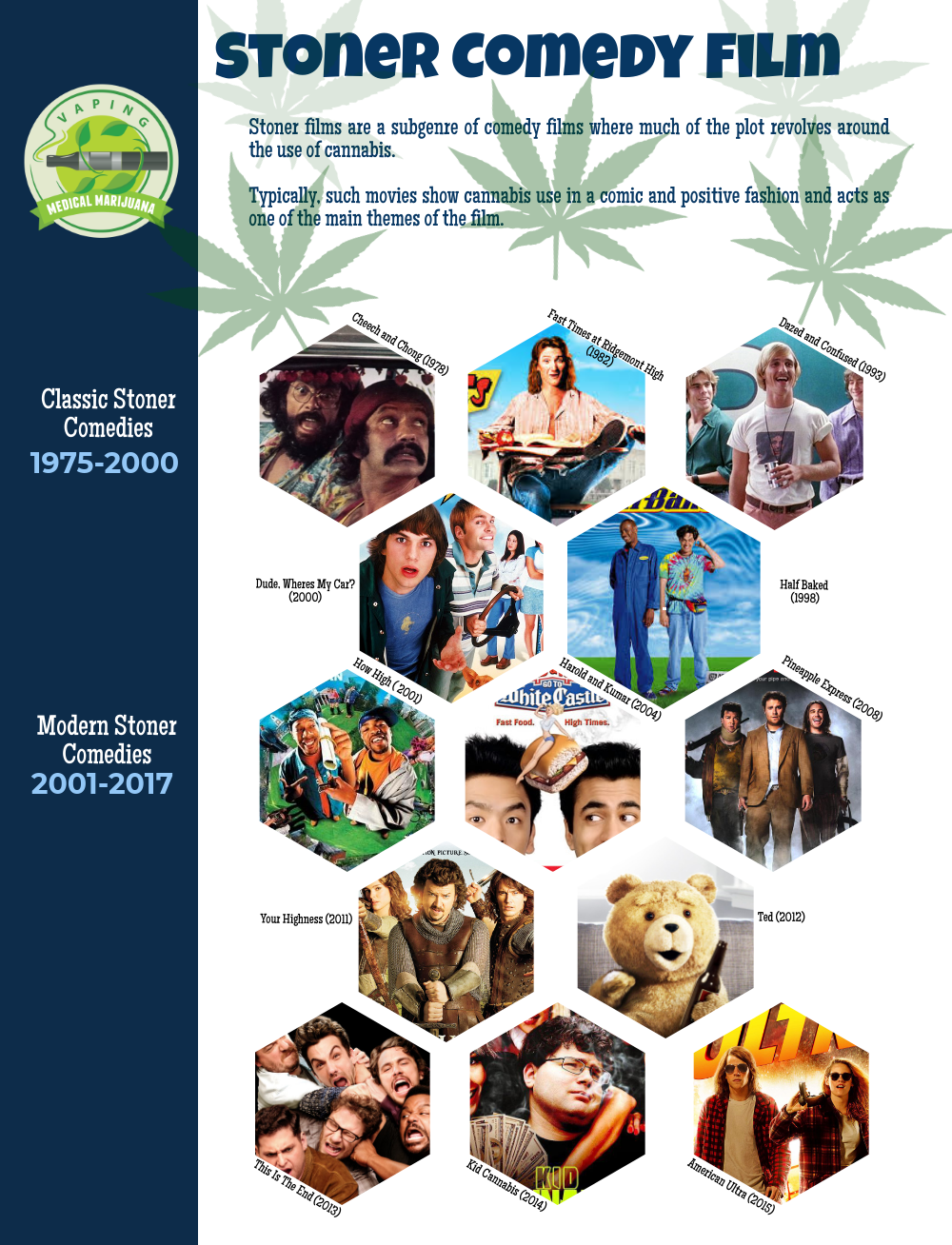 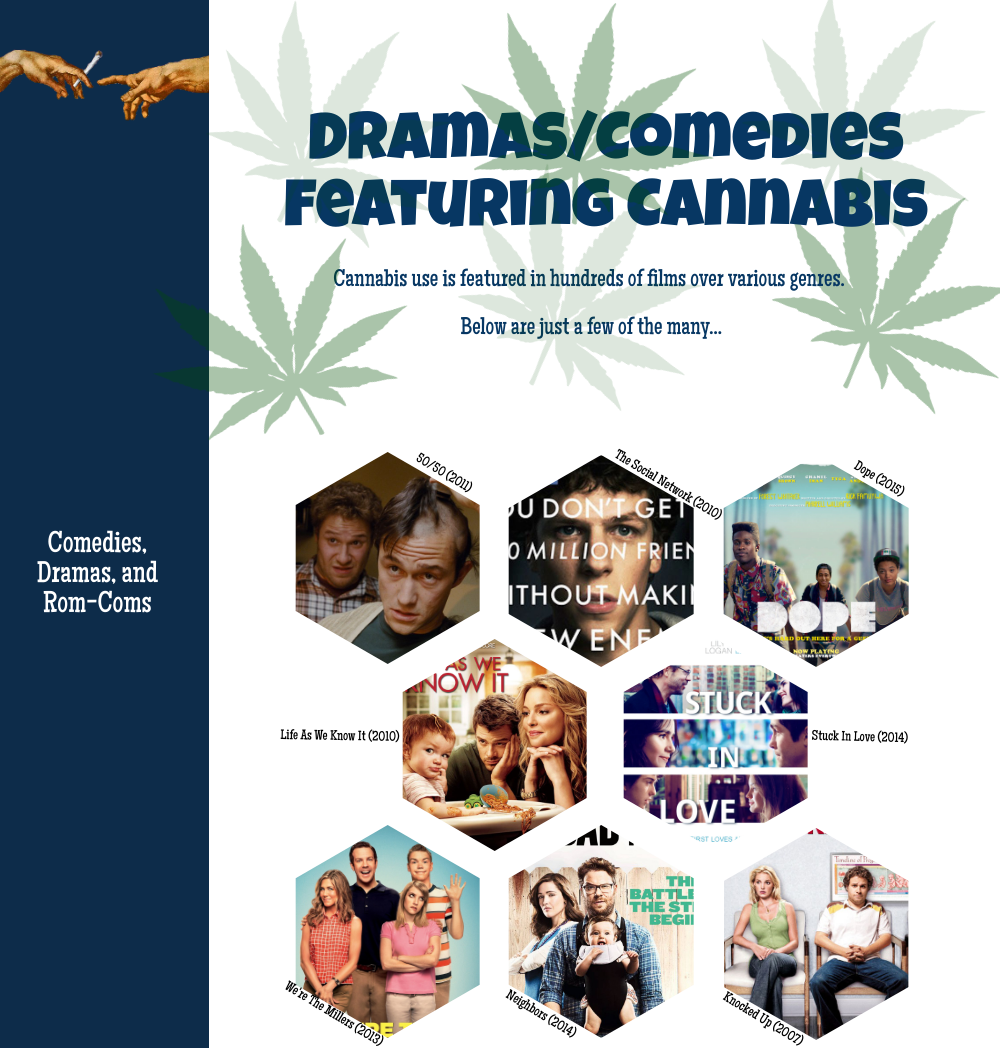 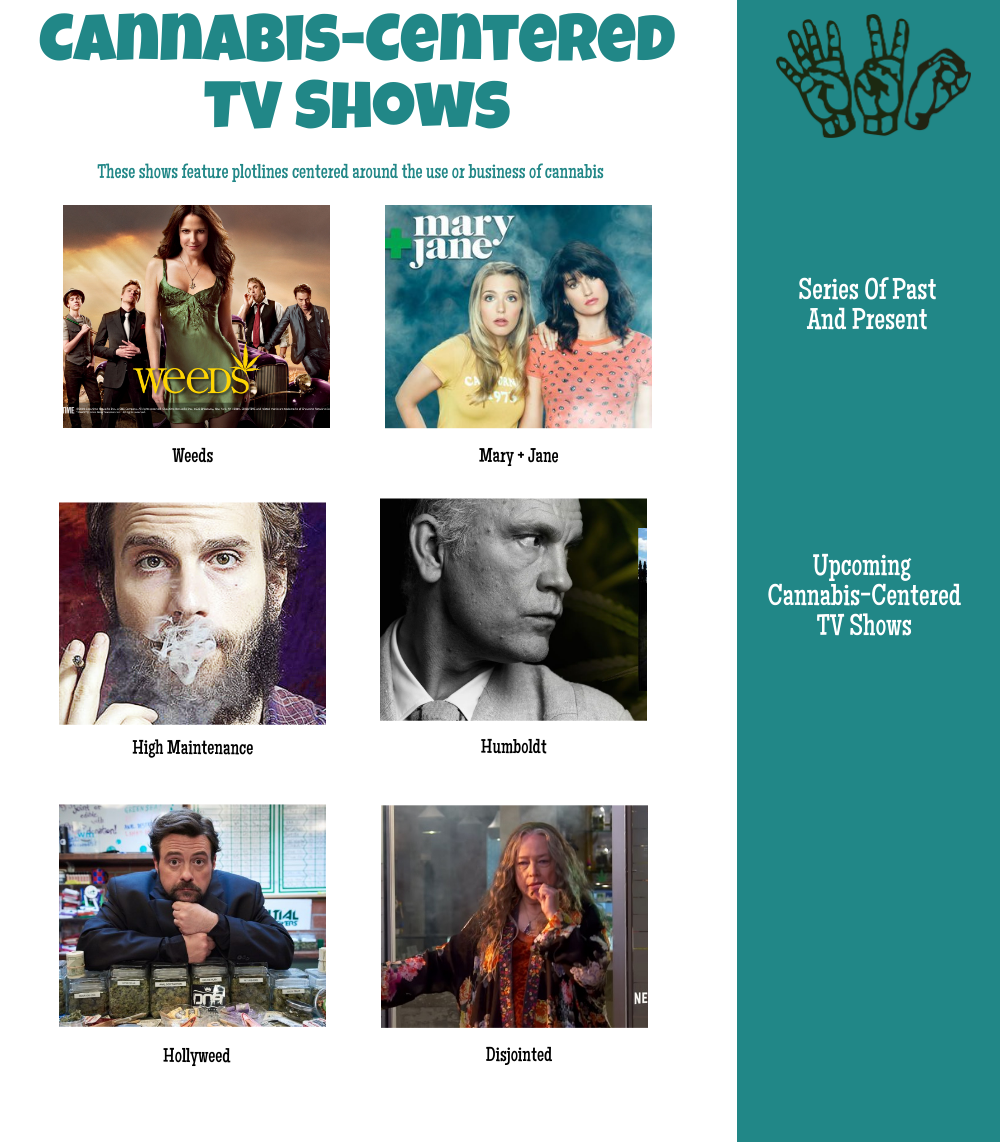 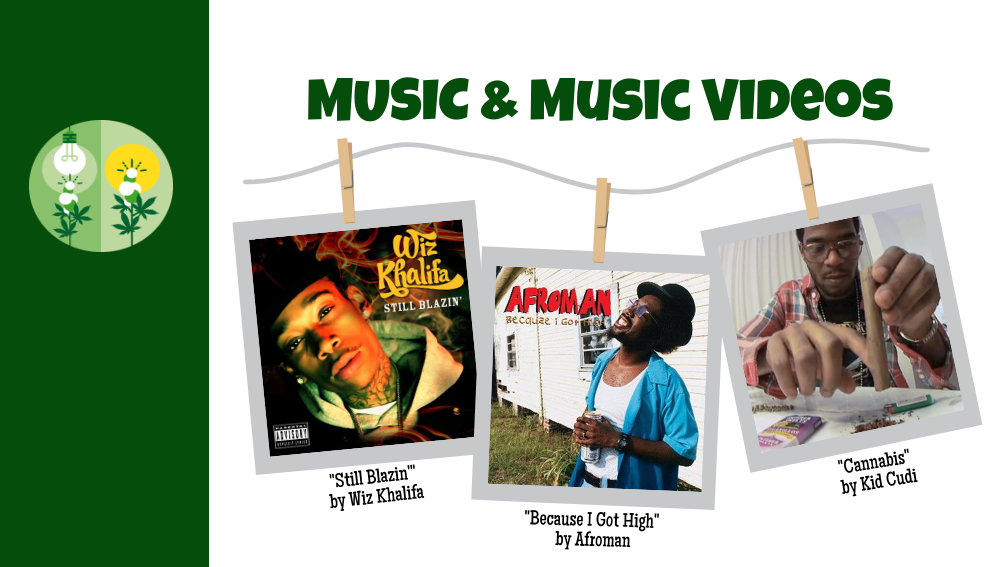 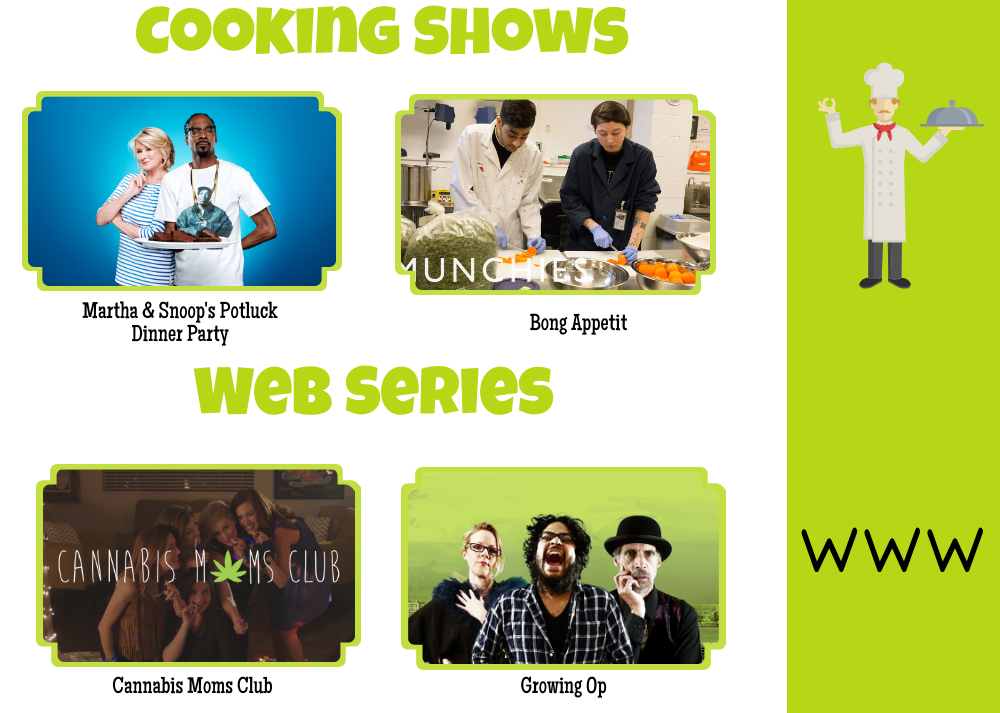 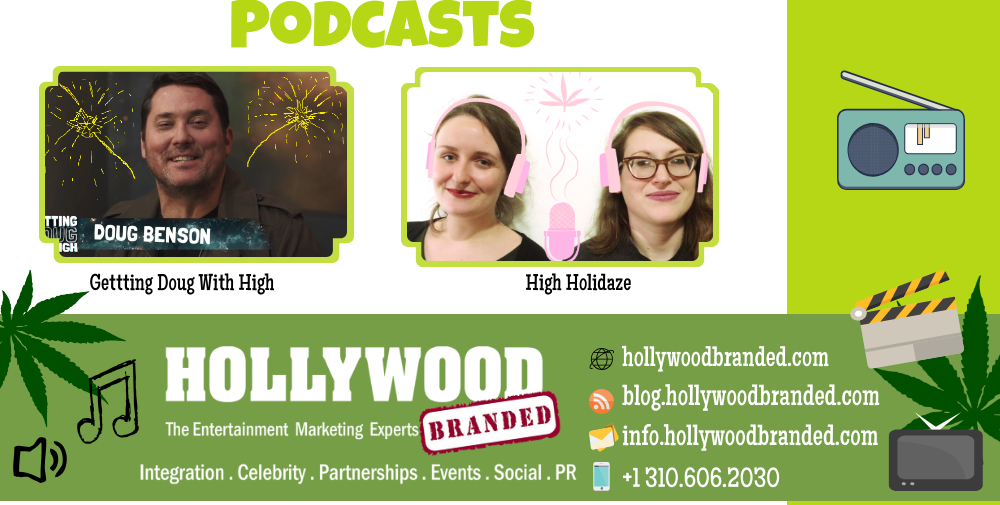 Get Ready For Your Starring Role!

Cannabis related brands have a PHENOMENAL opportunity for product placement in upcoming content. If you have a cannabis brand, reach out to our team today to chat about what content is about to go into production, that would make a tremendous marketing platform for your brand!

Be sure to check out our infographic and blog Cannabis Influencer Marketing, where our team provides real life examples of cannabis brands and social influencers (and celebrities) who have partnered together in the past!

Check out some of our other agency blogs that talk about best marketing practices for product placement and brand integration partnerships:

Interested in getting your cannabis brand involved in TV shows and feature films, or partnered with a music artist? Then download this e-Book where our team has provided insights into how to make this marketing practice work for you!