The hippie revolution of the 1960’s ushered the way for an emerging culture centered around the consumption of cannabis. Today, the plant, commonly referred to as “Mary Jane” or “weed”, has become a social hub for activists, influencers, enthusiasts, music artists, celebrities and the like to celebrate the euphoria-inducing drug in all its many uses.

As state regulations continue to evolve and mindsets towards usage become more open, even more celebrities will be becoming 'brand' advocates and open to partnerships. In this blog, Hollywood Branded discusses how cannabis brands have used Influencer Marketing and Celebrity Influencers to advertise, and shares our infographic on cannabis influencer partnerships. 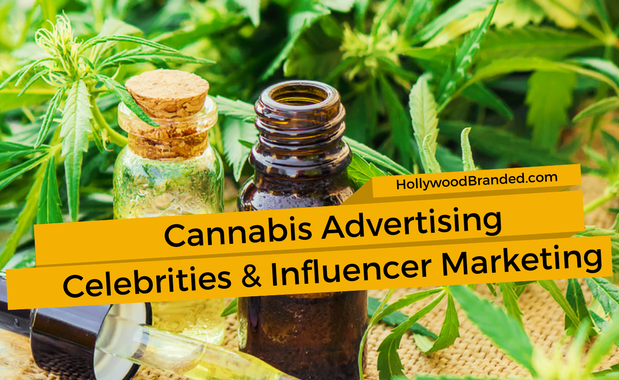 The cannabis movement was initially met with criticism; consumers of weed were and to this day still are sometimes associated with a negative stereotype under the label of “stoners”. But, its legalization in 26 states and D.C. within the last decade has increased its acceptance and popularity among people of all ages and backgrounds. Because of this, cannabis marketing has already proven itself to have massive potential, especially among celebrities, music artists, and social influencers.

The leaders of the movement to embrace marijuana in everyday life are familiar faces you’ve seen on the big screen or accepting awards at The Grammy’s. These mega stars, such as Rihanna and Susan Sarandon, not only are frequent users themselves but are also at the forefront of the legalization campaign across the United States. They have publicly praised the positive effects of the drug’s many medical and recreational uses, blasting government lawmakers for their continued resistance. They have even become involved in national organizations dedicated to the legalization of the drug, using their influence to make waves.

Our team has created an infographic that shows some of the most well-known influencers, music artists, actors and other celebrities who have professed their appreciation and support of Cannabis.  And this is just the tip of the iceberg of the potential future of celebrity and influencer brand deals that will be coming to a screen (or event!) near you...

So where does marketing come into play? The “cannabis culture” gives way for an exciting, new and enormous target market – the perfect opportunity for companies in the cannabis industry to move at full force and capture these consumers. With the booming industry, brands will need to differentiate themselves from their competitors and come out on top.

One key way to do this is through influencer marketing. Take Snoop Dogg, for example. In 2016 he partnered with the Canadian Cannabis company Tweed to launch three strains of marijuana under the name Leafs by Snoop. Afterwards, Tweed’s parent company Canopy Growth Corporation saw its market value climb nearly 17 percent – a record breaker that set the Canadian Cannabis industry in motion. This can definitely be attributed to the company’s collaboration with the cannabis culture icon and singer of “Young, Wild & Free” who reaches more than 35 million people all over the world.

The Future Of Cannabis Marketing

The possibilities for cannabis marketing are endless, especially as more influencers build their fan base around a love for and acceptance of marijuana.

Make sure you check out our blog on how Cannabis brands can leverage TV, Film and Music properties through product placement in their content!  Read it now: Cannabis And Product Placement Content Partnerships.