Every winter and spring the studios bring blockbuster feature films to the big screen, and this year is no different.  Three of the standout hits for action packed movie action have included Marvel's Black Panther, 20th Century Fox's Red Sparrow and Paramount's much anticipated reboot, Tomb Raider.

One thing these three films have in common is that each features a 'main car' for the hero action stars to drive.  Each of these films feature a different auto manufacturer which allowed the brand's to have the ability to build comprehensive promotional campaigns bringing the on screen exposure into real life through the brand's various media channels.  Which each brand did beautifully through co-branded TV spots. In Black Panther we get to see the Lexus LC 500 throughout a chase scene own the streets of South Korea. Red Sparrow features the BMW 7 series in various scenes throughout the film.  And in the new rendition of the Tomb Raider franchise we are introduced to the Volvo XC40.  In this blog post, Hollywood Branded explores car product placement as movie stars in three recent blockbuster action films: Black Panther, Red Sparrow and Tomb Raider. 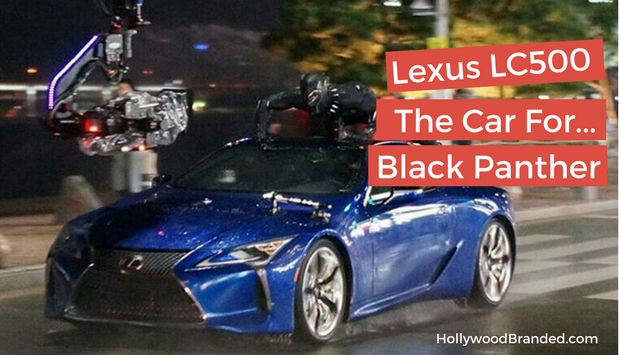 Success, dreams and freedom. For as long as they’ve existed, the car has been a symbol supported by tangible connections, and has been looked at as a status extender, transportation tool and a platform for technological innovations.

It is no wonder that the car can be seen in so many different yet natural advertising platforms, appearing in feature films, music videos, TV shows and various sporting event sponsorships. Car manufacturers receive tremendous interest from production companies who want to use their cars. It's about deliberately allowing a product or brand to be seen as supplies. In a movie or in a television production, it’s possible to feature the car in a more natural context when the viewer is less on his or her “guard” than during a regular advertising and commercial. Product placement is an effective tool for that subliminal messaging.  Which makes car manufacturers eager to participate in these partnerships.

However, how the cars appear and will be portrayed in the content is just as equally important as whether or not they appear.   No marketer (or at least very few!) wants their cars to be pictured negatively, or associated with an evil and immoral character. The goal is to have the placement represent what the brand stands for. For example, when a car by Volvo is being featured in a movie, one would like it to give you the feeling of safety, security and functionality.

Speaking of Volvo, Alicia Vikander isn’t the only Swede starring in the latest Tomb Raider movie. You can also spot the latest addition to Volvo collection, the compact SUV, XC40. Volvo cars have been used on the screen for a long time with deals brokered through their product placement agency and marketing department, and the most memorable and well-known movie car will probably always be the P1800 car driven by Roger Moore back in the 1960s show “The Saint”.

The XC40 in Tomb Raider might not become quite as famous, but being linked to a movie such as Tomb Raider is great publicity. Especially as past Tomb Raider brand partners for the auto category have revolved around Jeep, and this is a new opportunity for the brand.   Bob Jacobs, Vice President, Marketing, Product and Brand Communication, of Volvo Car USA said, “One of the things we love about the film is Lara Croft’s character: bold, surprising and always ready for adventure, just like the Volvo XC40.”

Lexus LC500 is not a SUV like the Volvo XC40 but a flagship coupe and the partnership between Lexus and Marvel Studios was introduced to the world during the third quarter Super Bowl ad.  This was a big move for Marvel, as Audi has reallly been their official auto partner through the Avenger's films and preceding storylines.

The new LC500 car can be spotted with the Black Panther (a great example of using the film's star for celebrity endorsement in the film) clinging to the roof during a chase down the streets of South Korea. Black Panther smashed the records with $218 Million at the holiday weekend box office and an increase for Lexus was also shown. The week after Black Panther premiered online searches for Lexus, at shopping sites, were up 15% from the previous week according to Autotrader. And Autotrader also revealed that online traffic for the LC 500 specifically was up 10%.

Plus...it gave Lexus a great way to stand out at car shows!

In addition to Volvo and Lexus, BMW has also been seen on the big screen this winter. As a main source of transportation within the script, the BMW 7 series is seen throughout the movie Red Sparrow.

“We were excited about this suspenseful adaptation of the bestselling novel Red Sparrow from the beginning. Jennifer Lawrence as Dominika embodies an elegant and strong agent. The BMW 7 Series and its positioning suit her character perfectly,” said Uwe Dreher, BMWs head of Brand Communications. After only the first weekend in theaters, BMW's spot reached 8,138,654 views.

Product Placement Should Be As Organic As Possible

The goal of product placement with cars in movies or television is that it should feel natural, sort of like it’s coincidentally there and a natural part of the action, even for just a few seconds. A successful product placement is discreet and makes a major impact to viewer's minds and memories... and through smart on screen plus off screen support (TV media, digital, print or out of home advertising support extending the awareness of the car and movie partnership) - and ultimately drive to more sales.

Check out our blog on how one car company masterfully has used product placement to not only sell their brand, but to revive a brand that was no longer in demand.

For other articles on product placement (we have so many!) check out one of other of our blog posts and also the infographic below.