Put A Placement On It

When raising the topic of product placement, folks often think of movies like ET and its famous Reese's Pieces or other overt integrations of brands into film and television. But a topic that is less discussed is the role of product placement in music.

Throughout every genre, you can find product placement in the lyrics of a multitude of songs as well as examples of branded partnerships with celebrities. Unsuprisingly, Beyoncé and Solange Knowles have proven to consistently be two extremely successful music artists when it comes to crafting a profitable endorsement with brands of a variety of different interests. In this blog, Hollywood Branded examines celebrity endorsements and product placement in pop music through case studies of the Knowles sisters.

I should note up front that I am very big fan of both Beyoncé and her younger sister Solange. Their respective catalogs each are very dear to my heart but also exist in very different spaces - where Beyoncé is the queen of pop (don't fight me on this one), Solange's music has always been less mainstream and more anchored in the alternative scene. Yet while Solange has always been more irreverent, outspoken and avant garde, what has surprised me most is that while she seems less interested in appealing to as mainstream an audience as her older sister, she is in many ways the ideal model of case studies in our line of work.

As I mentioned in a previous blog post, Solange has partnered with IKEA to produce a line of furniture due out (hopefully!) this year. But with the release of her latest album, When I Get Home, I was surprised to learn (shout out to my sister for giving me the heads up on it) of product placement in the free form structure of her avant garde album. And product placement is actually a common thread that both sisters have shared in their careers.

Let's first start with just a few examples of Beyoncé's history of branded partnerships and integrations. Most recently, we saw her new partnership with Adidas, which we wrote about recently in another post. The singer recently collaborated with the shoe brand in a partnership celebrating her iconic Homecoming performance last year at Coachella, which is now available on all streaming platforms and on Netflix! 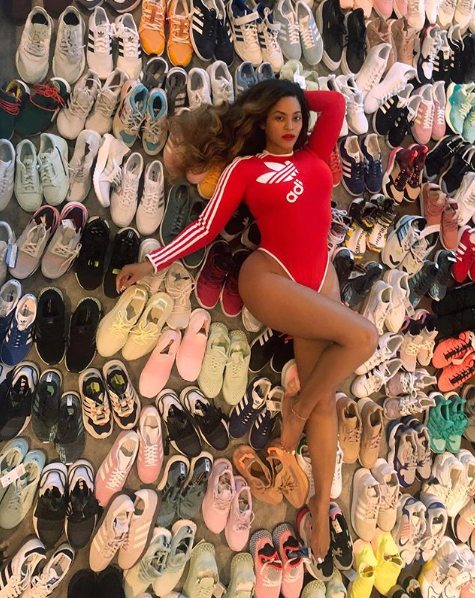 My personal favorite is from her iconic album, Lemonade. On the lead single, Formation, fans were surprised to hear the singer give a shout out to the casual food chain, Red Lobster repeatedly. This was an interesting branding choice because, while the queen Bey is known for being seen at five star restaurants in West Hollywood, Red Lobster is quite simply more relatable. And this made a BIG impact. The chain reported that after the release of the single, their sales spiked 33% that quarter!

Shortly after Lemonade, Beyoncé also announced a limited branded partnership with a cold pressed juice, specifically in promotion of one of their new watermelon flavors. For those not following the queen closely, this was a tie-in to a lyric from her previous lead single, "Drunk In Love." In a press release, Beyoncé stated, “Congratulations to my partners at WTRMLN WTR. I applaud the innovative female leaders at WTRMLN WTR, who inspire us with their creativity and their true commitment to elevating our community and culture.”

But one of Beyoncé's most well known branded partnerships has been, to the surprise of many, with a vegan diet program. Both she and Jay Z have vocalized endorsements for a vegan lifestyle (he even gave a shout out in his blog, yet another product placement.) Beyoncé has challenged her fans to join her several times- first in 2015, then in the month leading up to Coachella in 2018 and most recently announced that she'd select a fan who joined the challenge to receive the gift of seeing her and Jay Z for free for the rest of their careers!

As I mentioned earlier, Solange Knowles has always gone to the beat of her own drum. Knowing that whatever she did would be compared to her sister, she never sought to inhabit the same space or make radio pop hits. Even with her most successful Billboard charting album, A Seat At The Table, songs like the gorgeous lead single, "Cranes In The Sky" are reflective of very serious issues like depression and racism in America. That's not to say Solange doesn't contain multitudes because ASATT is also primarily a celebration of black culture.

I'm always impressed by the level of thought and consideration that Solange puts into her branding. Rejecting stereotypes and conventional perception of what it means to be a black woman in America, in her latest release, Solange claims a space for blackness in high art just as her sister did last Summer shooting a music video in the Louvre.

In addition to the social and political commentary of her latest work, there was also prominent product placement. In her song, "Almeda" (cowritten by the pop hit maker Pharrell) Solange sings, "Black faith still can't be washed away, Not even in that Florida water." Upon hearing this line, I initially wondered what reference I was missing, but it turns out it was actually product placement for one of her favorite brands.

As it so happens, Florida Water is a fragrant cologne brand comprised of essential oils and Solange has a personal (if not also professional) investment in the brand. As a matter of fact, this is now the second time she's promoted the product. And where was the first one? The red carpet! As branded integrations with red carpet events is a marketing tactic we work in ourselves, we can guarantee you that it's not by happenstance that the singer was spotted carrying it last year at the 2018 Met Gala as seen below.

The relationship Solange has with Florida Water is truly a brand's dream come true - first with a red carpet promotion that got commentators from E! News talking about it (erroneously calling it a beverage, which generated many articles clarifying that it was in fact a cologne.) And then with an even more direct shout out (several times) in the lyrics of her latest album.

This is in fact the kind of relationship that brands hire agencies like ours to create and what makes this one so well crafted is that it's really hard to tell if Solange was approached by the brand and the endorsement happened naturally or if it was all arranged through a series of contractual negotiations. This is a clear indicator of authenticity in a brand partnership. This endorsement in particular was highly successful as it generated discussion and spread awareness for the brand. The proof is in the pudding as it's generated coverage from major press outlets and gotten the attention of her fan base. Personally, I'd never heard Florida Water before and now they've inadvertently caused me to write this entire blog post inspired by it. The power of influence in brand marketing truly is boundless.

Partner, Let Us Upgrade U

Want to learn how an agency can help get your brand into the hands and artwork of a celebrity that appeals to your target audience? Check out these other posts we've written on securing celebrity endorsements and product placement...

Want to learn which artist is the best fit for your brand based on what demographics you're looking to reach? Check out our video on the best artists to align with each generation!