Case Study: The Strategic Use of Controversial Celebrity Endorsement

It's common knowledge that one of the most effective marketing tactics for brand advertising has always been through celebrity endorsement. However, when choosing which celebrity to work with, companies have to be extremely careful, since controversial celebrities can backlash on the brand image. Nike announced Colin Kaepernick as a major part of its 30th anniversary for the “Just Do It” campaign at the beginning of September. It soon led to several boycotts nationwide – a Rhode Island town council even approved a nonbinding resolution to boycott Nike products (although it was revoked a week after due to the widespread backlash).

Despite the outrage of some consumers (with extreme reactions, such as burning their Nike shoes), Nike’s sales, in fact, has increased 31% from Sunday through Tuesday over Labor Day. In this blog, Hollywood Branded shares what impact Nike's latest ad campaign had on the brand and discusses how it succeeded with its controversial celebrity endorsement. 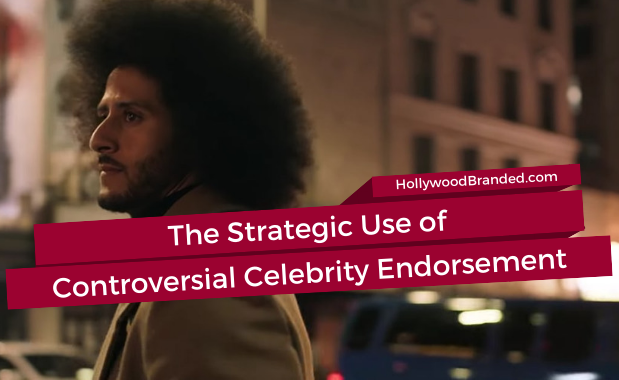 Who Is Colin Kaepernick?

Colin Kaepernick, former quarterback for the San Francisco 49ers, started the U.S. national anthem protests with some fellow football players by kneeling during the national anthem before N.F.L. games in 2016. The protests intended to show their disappointment in racial inequality and police brutality. Kaepernick currently remains a free agent without a team, as the NFL refuses to endorse his controversial gesture.

What Is The Ad Campaign?

On September 3rd, Nike announced Kaepernick as the face of its 30th anniversary “Just Do It” campaign, with the headline “Believe in something. Even if it means sacrificing everything.” referring to the national anthem protests he started, which left him with no team to play for. Later on, an two-minute commercial, featuring inspirational sports figures like Serena Williams and LeBron James, narrated by Kaepernick aired during the NFL’s season opener on September 6th. In the commercial, Kaepernick encourages people to dream crazy, even if people laugh at what you do; he also inspires young people to not only have big dreams but bigger, as a montage of teenagers practicing sports plays on the screen. His narrative starts with telling some average people's stories, then shifting to true stories and experiences of famous athletes, such as Canadian teen soccer star Alphonso Davies, LeBron James, and Serena Williams, and how they achieved their dreams above and beyond given their circumstances. It resonates with younger generations, as questioning authority and engaging in social justices issues appeals strongly to them. Capitalizing on this, Nike put Kaepernick and his message at the forefront of their brand - associating themselves with what younger audiences identify as courageous, strong and in line with their values.

What’s The Impact On Nike's Branding And Sales?

After announcing its decision to feature Kaepernick in their ad campaign, Nike immediately caused a wave of criticism following by social media videos showing people destroying their Nike gears. Donald Trump even tweeted: “Just like the NFL, whose ratings have gone WAY DOWN, Nike is getting absolutely killed with anger and boycotts. I wonder if they had any idea that it would be this way? As far as the NFL is concerned, I just find it hard to watch, and always will, until they stand for the FLAG!” a day after Nike’s release of its new ad campaign. 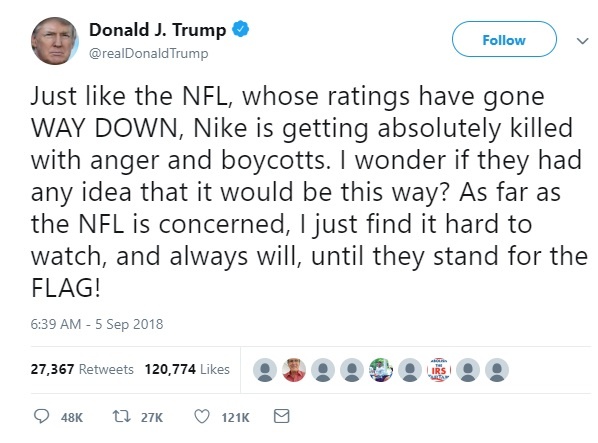 However, the brand’s sales increased 31% from Sunday through Tuesday over Labor Day, which is a huge increase (and the highest increase) compared to that in 2017 which was 17%. It seems like the company’s decision to feature Colin Kaepernick in their campaign isn’t a failure at all.

How Did Nike Succeed?

Although Nike’s stock has suffered a little bit since its new ad campaign aired, its sales have reported an extremely high increase otherwise. In fact, despite all the criticisms from those that opposed the choice, around 67% of Nike’s customer base is under the age of 35, which is also more ethnically diverse. According to a study by Edelman, 60% of millennials are identified as “belief-driven buyers”; additionally, half of all customers in the survey said that they make purchaes with ethical concerns.

Moreover, it appears that Nike always had high confidence in this new campaign. In fact, Nike has a history of incorporating controversies in their ad campaigns. In 1995, Nike had an ad campaign focusing on women’s rights in athletics, in addition to another ad featuring Ric Munoz, an HIV positive Los Angeles marathon runner. In 2017, Nike started selling women’s sports hijab.

The headline “Believe in something. Even if it means sacrificing everything.” doesn’t only apply to Kaepernick’s belief in social justice and equality. It also applies to Nike’s courage to take a stand on social justice issues. It’s like saying “Believe something. Even if it could hurt your stocks and sales.” It also exactly proved how committed Nike is to its spirit “Just Do It.”

If you're interested in learning more about controversial celebrity endorsement, check out these articles from us:

To learn more about the impact celebrity endorsements have on sales, check out our video of case studies of how successful brands have been at using celebrities