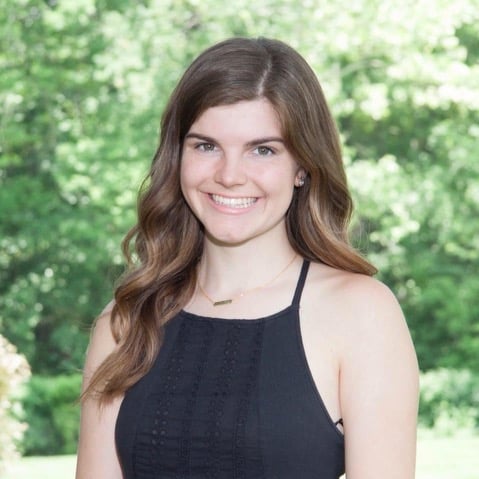 Fast Food... With A Famous Twist

From Carl’s Jr. enticing television viewers to buy their burgers using supermodels, to boxer George Forman being the spokesperson and namesake of the “Lean Mean Fat-Reducing Grilling Machine” that is the George Forman Grill, using the power of celebrity to promote food products is nothing new. But what happens when fast food takes it a step further?

2020 was a lot of things, but for food, it wasn’t all bad. Last year several fast food companies partnered with big names to hype up existing menu items and spin them into bestsellers. In this blog, Hollywood Branded talks about the 2020 trend of celebrity fast food collaborations. 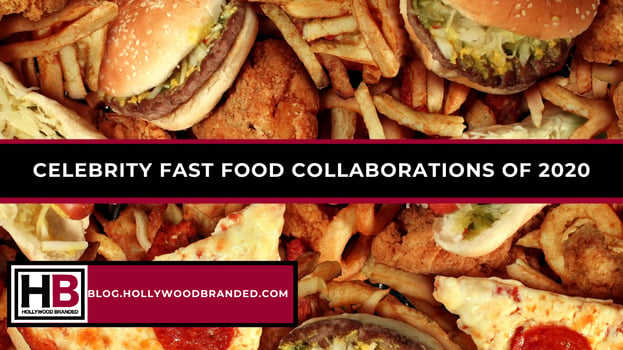 Who Doesn’t Want To Eat (And Drink!) Like A Celebrity?

From Carl’s Jr. enticing television viewers to buy their burgers using supermodels, to boxer George Forman being the spokesperson and namesake of the “Lean Mean Fat-Reducing Grilling Machine” that is the George Forman Grill, using the power of celebrity to promote food products is nothing new. Celebrity endorsements have always been an effective way to bring a product to market. However, through the onset of the pandemic, many restaurants had to shift operations and get creative with their marketing to continue drawing customers. One of the most successful ways fast-food corporations accomplished this is a more specific celebrity promotion: Celebrity menu items. After all, who doesn’t want to eat (and drink!) like a celebrity?

The genius component that these partnerships have in common is that they recreate a current menu item, or even simply rebrand an existing menu item. This endorsement of a low-cost item by a popular celebrity brings in a new variety of customers, in addition to the ones already loyal to the brand.

“The Charli” At Dunkin Donuts

This fall, Dunkin Donuts hopped on the TikTok trend and chose the most popular person on the app to rebrand an existing menu item. At only 16 years old Charli D’Amelio has amassed over 100 million followers and over 8 billion (yes with a B) likes across her videos. On September 2, 2020, Dunkin dropped “The Charli”, a Dunkin cold brew with whole milk and three pumps of caramel swirl, Charli’s go-to order. Charli can be seen sporting Dunkin merch and completing looks with her signature orange-strawed beverage across her social media accounts.

As the crème de la crème of TikTok, Charli is the perfect partner for Dunkin. Her videos reach millions of people every day and are the perfect place to advertise a new menu special. According to Klear Research, the impact of influencer campaigns was up 57% in 2020, compared to 2019. Gen Z is a clear source of growth for companies, which is why Dunkin’s partnership with a Gen Z influencer like Charli could spark a new generation to “run on Dunkin.” 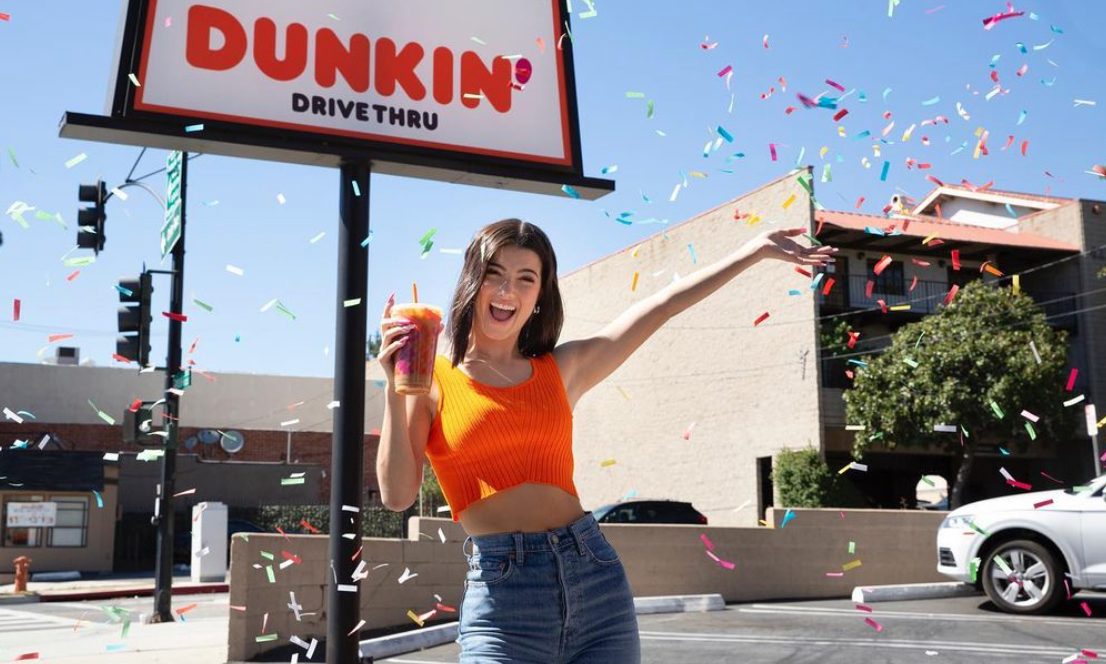 For the first time since the McJordan in 1992, Mcdonald’s debuted a new celebrity menu item on September 8, 2020, with the launch of the Travis Scott Meal.The limited-time $6 meal, composed of a quarter pounder with bacon, fries with barbecue sauce, and a medium Sprite to wash it all down, was a huge hit. The demand for Cactus Jack’s signature meal was so high that several Mcdonald’s locations across the country couldn’t keep up, and caused McDonald’s to reevaluate their ingredient supply chain.

The demand for the collabs marketing materials was astronomical as well. Fans were listing stolen posters on eBay for varying prices ranging from $20 to over $1000! For fans who wanted to legally obtain merchandise, McDonald’s and Travis Scott released a variety of items featuring the collaboration. From Happy Meal toys to all types of clothing, Travis Scott and McDonalds had every item covered. This exclusive line of merch was an instant success. From chicken nugget body pillows to Cactus Jack Breakfast Boxers, fans went crazy for it all. After the store was quickly sold out, there was still a huge market for these collaborative items, and the resale market exploded. Don’t worry if you missed out on the initial sale, you can still purchase the chicken nugget pillow for a measly $600 on resale site Grailed.

A number of fans went viral on TikTok by posting their creative ways of ordering the “Travy Patty” in the drive-thru. Some simply stated “You already know why I’m here”, some told the cashier Cactus Jack sent them, and others blasted Scott’s hit Sicko Mode. Not only did McDonald’s and Travis Scott benefit from the profits from their partnership, but the free advertising from teens vying to get their hands on a meal only increased their popularity. The viral collaboration was such a success that McDonald’s introduced the J. Balvin Meal on November 2 by reinventing an existing meal. With the success of these partnerships, only time will tell who’s go-to meal could be featured on the menu next. 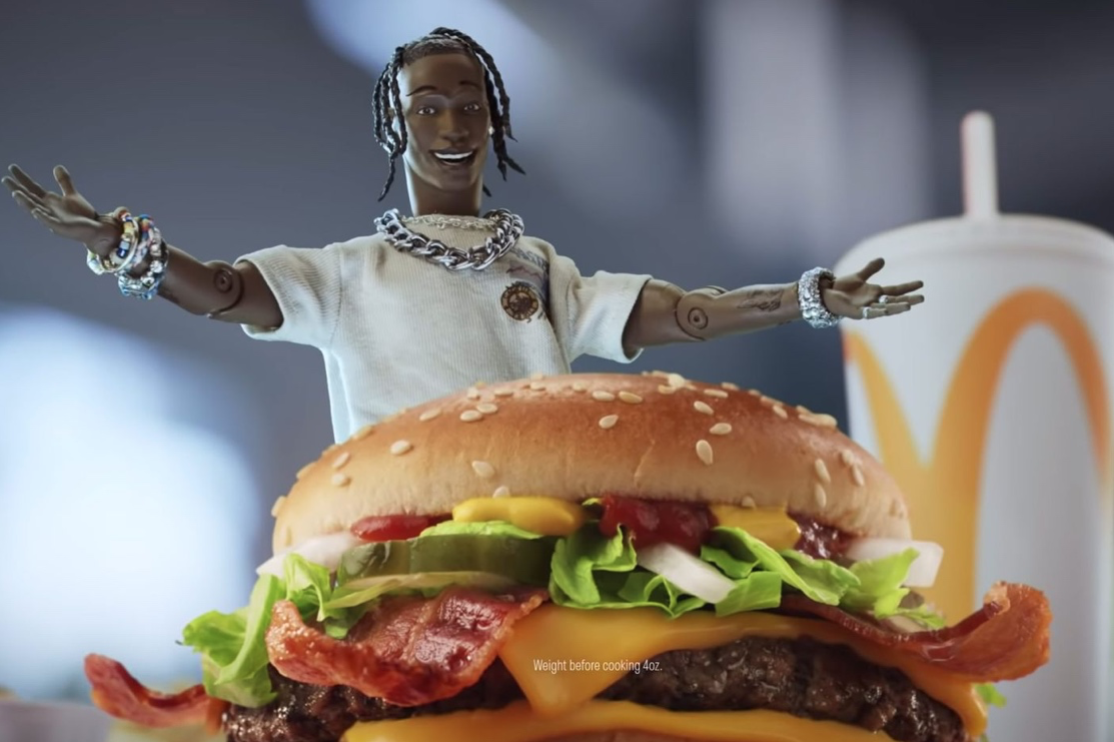 “Guac Is Extra But So Is Miley”: Miley Cyrus’ Burrito At Chipotle

“If Miley comments, I’ll…” Beginning in November, Miley Cyrus was the subject of a viral TikTok Trend. Users were captioning their videos “if Miley comments I will..” and Miley was glad to fill in the blank. Her replies instantly received thousands of likes, inspiring tattoos, haircuts to match Miley’s current mullet, and children’s names (ICYMI: Miley suggests California). Chipotle got in on the fun and posted that if Miley commented, they would make a Miley Burrito available in their app. She responded and the “Guac is extra but so is Miley” burrito was born on December 9, 2020.

Miley has long been known for being a pescatarian, and her burrito is no exception. According to the Chipotle App, Miley’s featured Mexican meal is a veggie burrito with white rice, fajita veggies, black beans, tomatillo-red chili salsa, roasted chili-corn salsa, romaine lettuce, and of course, guacamole.

While Miley’s burrito has been a social media success, Chipotle is no stranger to partnering with big names. David Dobrik has long partnered with the brand, having his own burrito featured on their menu for National Burrito Day in 2019. Most recently, he helped launch “Chipotle Royalty”, a competition for fans to prove that their Chipotle Order is the best. Three winners had their own Miley moment by having their go-to order on the menu for a limited time in December. 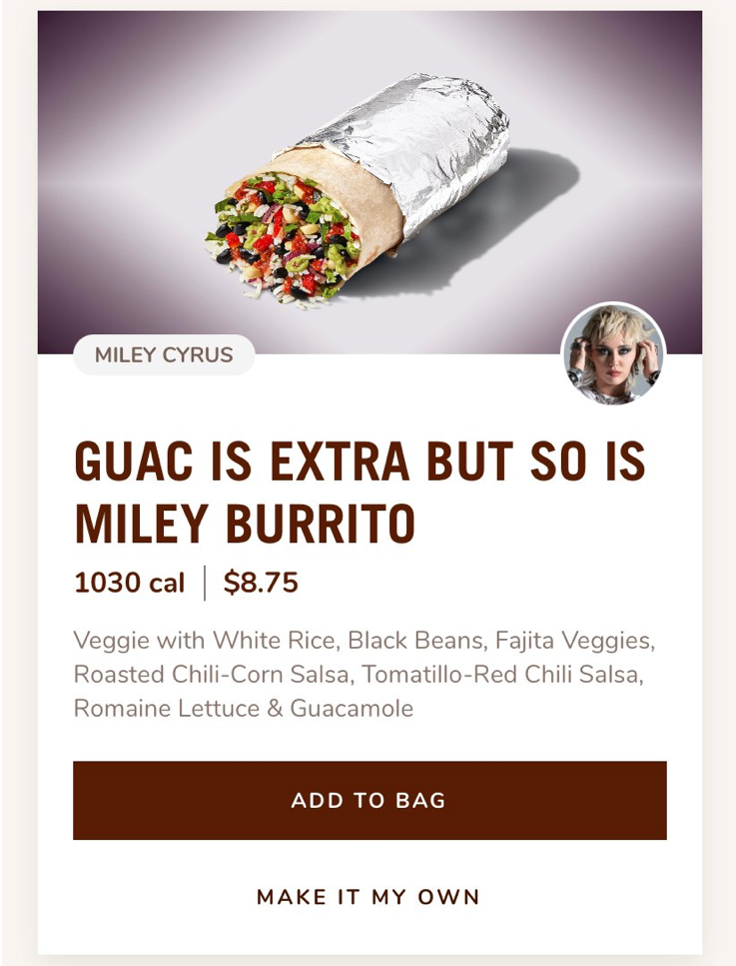 2020 Is Gone, But Are Celebrity Menu Items Here To Stay?

2020 was a big year for Celebrity Menu Items. Not coincidentally, TikTok played a key role in each of the promotions. TikTok is all the rage for GenZennials and it is the perfect tool to elevate promotions like these. Brands are realizing that younger age groups don’t respond as well to traditional advertising and must step outside the box and find ways to engage young customers like the aforementioned fast food collaborations. With the success of these partnerships, it will be exciting to see if other big names in fast food follow suit or if collabs like these will be left in 2020.

Celebrities endorse everything from candidates to cookware. If you’re enticed by endorsements, check out other blogs the team has written about celebrity partnerships:

Want to learn more about celebrity partnerships? Watch this webinar to learn how to create celebrity-driven social campaigns that engage consumers!