So you tagged your favorite celebrity on Instagram and THEY LIKED IT! But did they really? Take another look at that.  Celebrities are busy jet setting from meeting to meeting and schmoozing with their other famous friends.  Or actually working.  In fact... there is something many fans and brands don't realize.  Most celebrities don't write their own social media posts.  That includes those carefully orchestrated fee based brand posts.

In reality, most celebrities outsource to agencies and managers to assist them in what can be a full time job. In this blog, Hollywood Branded takes a look at celebrity influencers and the heartbreaking reality to some that celebrities don't write their own social media posts.

So who is in control of the celebrity's social media world?  That would be their Social Media Managers. According to sproutsocial.com, some social media managers make up to $85K a year! To create an illusion of someone else’s life. What a DREAM. Until you make a mistake for your client...then it's another story that you can read about from our blog post How One Brand Won Big On A Celebrity Influencers Endorsement Mistake.

Celebs are busy. They have managers to schedule and plan their days, agents to get them jobs and plan what they’ll be working on for the next couple of months. Up at dawn…falling asleep only a couple hours prior. Do they have time to think of witty Instagram captions? Probably not!

But someone has to…because their future jobs now actually do in a large part depend on their social media engagement.

Some of the tools these social media managers use that your brand can also benefit from include these great software tools that we discuss in our blog Graphics Cheat Sheet For Brand Marketers.

Accidentally post the wrong one? Accidentally get fired. Celebrities expect a lot from social media managers, and it lead into becoming a very high pressure job.   After all, the social media manager is essentially the public face for the celebrity they work for.  But don't feel too bad for them... there are certainly perks that come along with the job!

The next TV show or movie the celebrity may be starring in wants to take advantage of those celebrity social media marketing machine opportunities. Not only do producers look at the number of fans following the celebrity, but also their engagement. Just like brands, studio and TV execs are looking for these things daily because there’s money to be made in the world of social media!  Including box office and advertising dollars around their projects. 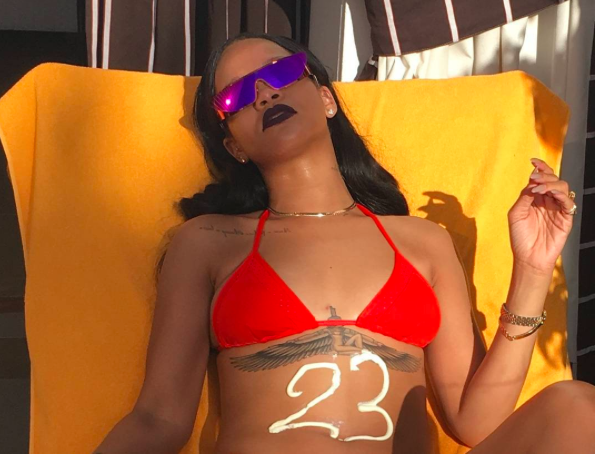 They Make It Look Easier Than It Is!

Those “candid” pics actually have taken A LOT of time, plus the involvement of hair/makeup artists, and stylists to make sure that each strand of hair blows perfectly in the picture the fan will draw inspiration from. A thousand shots later and they have “the one”.

Edit, filter, upload and wahla! An effortless quick snap to the viewer, a full days work for the celebrity media team.

You may wonder why a social media branded post can cost so much! This is, in part... why.

Above we mentioned “candid pics” but there has been multiple occurrences of celebrities....or their managers... posting obviously photoshopped content.  Recent celebs having been called out for this practice include Kylie Jenner, Mariah Carrey, Rihanna, Taylor Swift and Miranda Kerr.

Today's social media landscape has created an entirely new world.  No longer are celebrities able to ensure their image is photo perfected by someone else with some extra lead time built in before anyone sees it.  Same day photo sharing used to only be reserved for surprise paparazzi shots (another story for another time... those aren't always such a surprise either!)

And with not hundreds of thousands but possibly approaching a hundred million fan followers - a celebrity is going to want to have their best face (or thigh) appearing in the shot. And it's just as important if not more so for those fee-driven branded social posts where a celebrity appears as a brand ambassador.  Everyone wants the post to be perfect.

It's Just Another Part Of Their Job

As a favored social media platform, posting on Instagram is just part of a day's work. And it's a different type of usage than what the common folk use it for.  Instead, Celebrities use social media platforms to help position themselves for more future job opportunities, as part of contracted sponsorship deals, and of course, to continue to engage a fan base who assist in helping make the celebrity themselves even more marketable.

Ready to Work With Celebrity Influencers?