Engagement On Trial: The Pros And Cons Of Engagement Data

Engagement has been used by brands as the end all be all tool for measuring success since the beginning of social media. It is only now that marketers are realizing that this may have been a poor choice of a metric. In fact, It might have caused more headaches than originally intended.

For something that was widely and quickly accepted as “marketing’s new key metric” (Haven, Bernoff, Glass, 2007), it’s a wonder that engagement has been met with fury when mentioned at social media brunches. That’s why in this blog, Hollywood Branded examines the pros and cons of engagement data to determine the best metrics to analyze social media success. 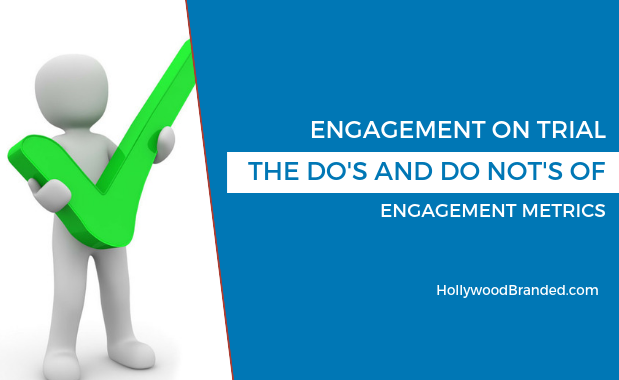 It Was All The Rage

In 2007, Forrester Research published a study that suggested engagement would become “marketing’s new key metric” within the coming years. According to them, the marketing funnel has been reduced to a troubled metaphor that overlooked the intricacies that social media introduced into the buyer process. They suggested finding a new approach that would compliment the transforming landscape of buyer trust against the diminishing attraction to traditional media. Their solution: engagement.

Ok, we get it. New Year. New Me. Social media presented new problems, so it is only natural to propose new tactic to solving those issues and measure success. This sounds simple, but marketers are still failing to properly improve their social marketing efforts. Is it something that the marketer is doing wrong, or is it something else?

Engagement Data Is Not Everything

In 2017, United Airlines created the most engaging post of the year. They didn’t use emotional triggers, puppies, or the promise of riches in their post however. Instead, footage surfaced revealing the foul treatment of one of their passengers. Yes, all the engagement surrounding this post was negative.

Any social site would report this high engagement rate as a success, but having those many eyes on United Airlines actually hurt their business. There may be little connection between engagement and business value.

According to Facebook business, the company suggests that “industry research has repeatedly shown that engagement rates do not correlate with the outcomes ultimately used to judge the success of marketing efforts.”

Facebook almost exclusively features business metrics like sales and awareness to justify their modular success. Engagement is frequently left out of the conversation. Instead, focus on business results to measure the effective of marketing efforts

Engagement Data Can Be Misleading

For Digital marketers, defining the best practices to optimize a campaign is a no-brainer from the get go. Again, when these best practices involve solely measuring engagement, the information that is received can often be misleading.

Take telecom provider Cox for example. Cox found that their image ads generated less social engagement than their other creative formats, so the company removed them from its ad buy strategy. To them, these posts were under-performing according to their engagement data. Soon after, they began tracking conversions from social, and they saw that image ads actually drove more revenue than any other ad format. To conclude, relying on engagement alone actually persuaded Cox to abandon their most successful advertisement strategy. A lack of engagement does not mean your message was not heard.

“Don’t forget to sell shirts & shoes” is a sign that is on the whiteboard in the office of Under Armour’s CEO, Kevin Plank. What Plank means by this is simple: do not get caught up in vanity social metrics or campaigns and products that are a waste of time. CEO’s typically don’t report on engagement rates, they report on brand strength and sales. After the success of Under Armor’s “Rule Yourself” campaign, VP Global Consumer Engagement Jim Mollica stated, “the program results not only confirmed, but exceeded our expectations, driving fantastic results for the campaign in terms of ad recall, purchase intent and message association.” Again, purchase intent is the magic bean in their formula.

Consumer engagement has always been and continues to be important in marketing. However, ‘engagement’ is a complex term, with varying definitions across traditional marketing and online advertising. It is difficult to measure engagement comprehensively, and clicks capture only a small portion of what the term entails. Before beginning your next social media campaign, it may prove beneficial to first choose metrics with your team that will actually boost your campaign efforts. We know you’re savvy marketers, by try relying on business metrics that actually, well, prove something.

We have many more blogs to shed light on social media marketing, so feel free to browse our extensive library!

Check out the various events your brand can get involved in for potential celebrity and influencer interactions in our Hollywood Event Guide for brands.