Guardians of the Galaxy: How Brand Partnerships In Space Can Exist

What Makes Guardians Of The Galaxy A Successful Film For Brands

If there was ever a sleeper hit of Marvel’s Cinematic Universe it was 2014’s Guardians of the Galaxy. Of all of Marvel’s comic book turned movie properties, it was perhaps the least known before the film blasted into the cinematic universe, with very few having heard of the adventures of Peter Quill, Gamora, Drax the Destroyer, Rocket Raccoon and Groot.

Skip forward to 2017, and Guardians of the Galaxy Vol. 2 is one of the most highly anticipated films of the year.

In this blog, Hollywood branded discusses the massive success of Guardians of the Galaxy and how brand partnerships in space themed films can exist. 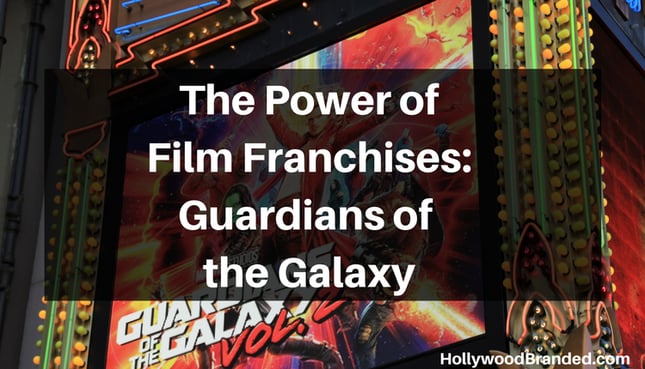 The Creation Of A Galaxy

The Guardians of the Galaxy began their existence in 1969 in issue #18 of Marvel Super Heroes, created by Arthur Drake and Gene Colan and comprised of an entirely different team than the one that would appear on the big screen decades later. The Guardians went through many character changes as the original team existed in a 31st century futuristic timeline whereas the current iteration exists in the present day. The current incarnation of the team was introduced in comic form in 2008 though the characters had made prior appearances along the way.

One of the main reasons for the success of the 2014 film was the power of the Marvel brand name. By 2014, the Marvel Cinematic Universe had gained immense popularity, with Guardians of the Galaxy serving as its tenth release. This film gave the studio the opportunity to introduce characters that were unknown outside of comic book circles. While the Marvel Cinematic Universe had brought into life into lesser characters previously, Iron Man, Thor, Captain America and especially the Hulk were much more well known than the "who are they?" Guardians of the Galaxy prior to the release of their respective films.

According to Marvel Studios president, Kevin Feige, a key factor in the success of films within the Marvel Cinematic Universe are the films' focus on genre. Guardians of the Galaxy is certainly more of a space opera film than a pure superhero film with the characters being far different than your typical superhero type.  This film, along with most Marvel Studio films, attempts to show the merits of its characters and story by having a lesser known and unlikely cast. In fact, some have noted how the film’s most recognizable stars - Bradley Cooper and Vin Diesel - having pure voice roles as they played CGI characters Rocket Raccoon and Groot. The film also demonstrated how Marvel can create star power, with Chris Pratt’s fame soaring after his appearance as Star Lord.

The soundtrack to the first film reached No.1 on Billboard which was a first for a soundtrack which relied heavily upon old music form the 1960s and 1970s. Director James Gunn kept this in mind when working on the sequel. The songs themselves played a role within the film and were seen as particularly important to Peter Quill's character development as the cassette tape was the last item he had from his mother.

Guardians of the Galaxy Vol.2 very much remains in the same spirit as the original. In fact, unlike most sequels it does not rely heavily on the addition of new characters with the exception of Mantis and Ego, which gives much needed time for additional character development. This may be in part due to the fact that the dynamic of the group has changed with the introduction of Baby Groot, who takes on a different role to that of his previous incarnation.

The film’s director James Gunn attempted to recreate the success of the previous film by making sure that everything was again included that had made the film so popular with audiences, such as its misfit group of characters and reliance on classic music. Gunn made sure that the soundtrack played as integral a role in the second film as it did in the first, because music played such a key role in the appeal of the film, with the soundtrack to Vol.2 being almost as anticipated as the film itself. In fact, the sequel places an even higher emphasis on the period-specific songs, with “Brandy (You’re a Fine Girl)” by Looking Glass having a central role in the film. Overall, the film gives audiences exactly what they wanted from the sequel as can be seen from the high Box Office gross so far.

Guardians Of The Box Office

There were very high expectations at the box office for Guardians of the Galaxy Vol. 2 due to the unexpectedly high performance of the first film.  The sequel commanded just over $145 million at opening compared to the over $94 million that the first film made. The film also practically dominated the box office in its domestic opening weekend accounting for 80% of the top ten grosses for that week. Ignatiy Vishnevetsky of A.V Club noted how the success of both Guardians of the Galaxy 2 and Fate of the Furious had strong plot similarities as both were “136-minute, PG-13-rated movies about misfit outlaws (and the ex-antagonists who join forces with them) thwarting evil plans and endlessly harping on about family”.

While both films did have a similar plot, Guardians is perhaps unique enough to maintain a lead in the worldwide box office for the next month or so. As the film opened in different markets on different dates it is difficult to predict the exact worldwide total for the first week, but it is clear that the sequel is on track to beat the previous film’s total worldwide gross of over $750 million if the opening gross is anything to go by.

Unlike many sequels, Guardians of the Galaxy Vol. 2 has maintained a steady increase in popularity if the box office is anything to go by. With critics, as expected, it scores slightly lower on Rotten Tomatoes with a critical score of 82% compared to the original’s 91%. For audiences on Rotten Tomatoes, however, it dropped by just 2% with 90% audience rating as opposed to the original’s 92%. With Vol. 3 already announced, there’s no doubt that the Guardians of the Galaxy have left a strong mark on popular culture.

While it may seem unlikely for product placement opportunities in a film set it space, Guardians of the Galaxy proves that any film is suitable for brand partnerships. In fact, Sony’s Walkman played a pivotal role in the first film as Peter Quill constantly plays his Awesome Mix Vol. 1 cassette tape on the Walkman which was a gift from his mother. The cassette played such a key role that the second film was titled Vol. 2. Also, due to the destruction of Peter’s Walkman towards the end of the film, a Microsoft Zune mp3 player, which is now defunct, appears in the film as Peter’s new music device, and is likely to feature in the next film.  Now - this isn't going to actually help Sony or Microsoft sell Walkman's or mp3 players - but it certainly does establish the consumer electronics powerhouse as top of mind to a major global population of viewers who may be more inclined to buy OTHER Sony products with the prominent name recognition becoming more 'cool'.  Although to note, Microsoft wasn't exactly so happy about that product placement....

Guardians of the Galaxy Vol. 2 had much stronger partnerships owing to the success of the first film. After all - if consumers haven't heard of a film and gotten behind it, it's truly rare for marketers to take the risk and belly up with large co-promotional media dollars either.  Among the promotional partners for Vol.2 are DairyQueen, Geico, Ford, GoGort, Hanes, Synchrony Bank, Doritos and M&Ms. These campaign’s mainly consist of TV spots with many featuring the film’s most commercial character - Baby Groot. To read about just how extensive these campaigns are check out our previous blog on Geico’s partnership with the film.

Along with the promotional campaigns, some of these partners also featured within Guardians of the Galaxy Vol. 2. Dairy Queen, one of the most visible promotional partners overall, appears in the film in two instances, one in a 1980 flashback and another in the 2014 time frame of the movie.  Now THAT is perfectly strategized product placement!  Ford also appears in a scene which sees Earth under attack and a Ford car almost being sucked up by the destruction. While the majority of the film does take place in mysterious planets, these scenes do take place in Earth, making their placement seem more organic.

Guardians of the Galaxy Vol. 2 is just one of many franchise films which can feature brand partnerships. If you're interested in franchise films you should check out our previous blogs on the Fast of The Furious and cinematic universes.

Now that you've learned about the power of product placement and brand partnerships, why not consider joining forces with a similar franchise film? To find out more, check out our Product Placement and Promotions 101 guide by clicking the image below!