The World Of The Fast & The Furious Franchise and Brand Partnerships

Why The Fast And Furious Franchise Is Perfect for Branding.

Franchise films are certainly a popular trend in Hollywood these days, as we saw in 2017 with the practice of releasing franchise film releases, with Logan, Kong Skull Island and Fifty Shades Darker. Among the most highly anticipated of the franchise returns for that year was The Fate of the Furious, the eighth film in The Fast and The Furious franchise.

With its perfect blend of fast cars, action packed scenes and an A-list cast it is no surprise that the franchise has been so appealing to audiences. In this blog, Hollywood Branded looks at how The Fast and The Furious franchise became the mammoth blockbuster moneymaker that it is, and how the film continues to be an ideal fit for many brands. 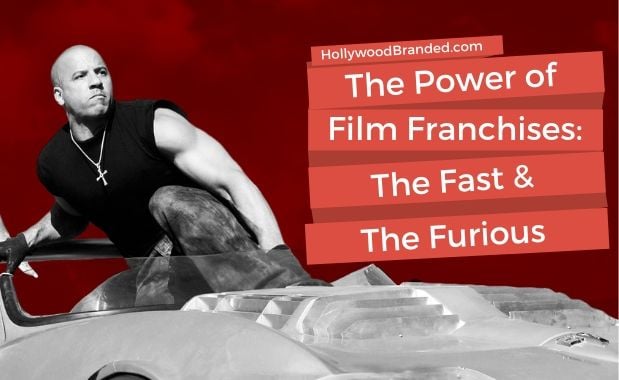 From Film To Franchise

The original film, The Fast and the Furious introduced some of the franchise’s most memorable characters, Brian O’Conner (Paul Walker,) Dominic Toretto (Vin Diesel), Mia Toretto (Jordan Brewster) and Letty Ortiz (Michelle Rodriguez), and set the basics for what the franchise was about to become. The idea for the film came originally from an article read by director, Rob Cohen, about street racing in New York City, and followed later by watching an illegal street race in Los Angeles. The first film was shot throughout Southern California, though the characters would end up visiting various places all around the world in later films.

As the film became a franchise, its range of characters widened with many additions to the cast over the years. Three of the additions to the main cast over the years include the characters Roman Pearce (Tyrese Gibson) and Tej Parker (Ludacris) who were both introduced in 2 Fast 2 Furious and Agent Luke Hobbs (Dwayne Johnson) who was introduced in Fast Five. As the franchise, progressed it developed a vast storyline and major following, with 8 films released so far, two short films, an additional two films in development due for release in 2019 and 2021 respectively, as well as a theme park ride in Universal Studios Hollywood. The franchise is even launching a live tour next year.

Development Of the Franchise And Its Challenges

Although the franchise is now a household name, it took some time for the films to be seen as a true franchise. In fact, just ten years ago it would have been difficult to predict just how popular the franchice would become. The first film set the tone for the rest and was certainly a throwback to classic racing movies, however, the next few sequels took the franchise off to a rocky start. 2 Fast 2 Furious was lacking the core character of the franchise, Dom Torretto, and its next outing didn't fare much better. According to Stephanie Merry of the Washington Post, the third film, Tokyo Drift "went niche, trying to appeal mainly to racing enthusiasts".   This points to the reason why this franchise, and many like it have become so successful, it has mass appeal. In order to enjoy a film in the Fast and Furious franchise you don't have to know much about the world of cars, making it appeal to virtually anyone.

The fourth film, Fast and Furious, brought the franchise back on track with the core characters returning. Then the franchise was further re-energized with the addition of Dwayne Johnson in Fast Five. The later success of the franchise may also be due to how the racing began to take a back seat. While the films were still about cars, there was a greater focus on the characters with the importance of family being a central theme throughout the films. The films also take great pride in diversity with the lead characters being of various ethnicities.

The franchise then met a great obstacle with the loss of one of its key actors Paul Walker who died in 2013 in a car accident. The franchise could have ended there, however, rather than simply ending with Furious 7, or killing off the character, it was decided to retire Brian O'Conner from the series. The film ends rather fittingly with Dom and Brian driving off at a crossroads in two separate directions.

If Furious 7 was a send off to the characters of Brian and Mia, then Fate of the Furious had to show a change in the dynamic of the group without Brian, one of the central characters of the series to that point. The film achieved that with the plot of Dominic Torretto seemingly forgetting the one thing that has meant the most to him in the series, family. It also sees one of the villains of the series, Deckerd Shaw returning as an ally to the team as they both share a common enemy, Cipher (Charlize Theron). While this changed things up slightly ultimately the film ends with the usual family gathering after the battle with Cipher, showing that while the structure has changed the heart of the franchise beats on.

Furious At The Box Office

As the franchise became bigger and bigger so too did each film's box office takings. The first film, The Fast and the Furious made just over $207 million at the box office worldwide while the seventh film in the series, Furious 7 made over 1.5 billion at the worldwide box office, over 7 times the amount made by the first film. The increase in sales, however, also necessitated a budget increase with the first film having a budget $38 million to $250 million for Furious 7. This increase at 6.5 times the first film shows a great level of success of the films as the box office figures grew at a slightly faster rate than budget.  Of course - a large part of that budget was directed not only at the special effects, but to the monster of a cast that earned their rights to more money through the success of the franchise.  That being said, the franchise as a whole is certainly a moneymaker for Universal. The latest film looks on track to become the most successful of the franchise with its opening weekend records, though it is hard to tell whether this will continue during the film's run.

This growth in the franchise's popularity is seen not only through the box office figures themselves but also through the ratings each received for their respective years. The first four films missed out on the top ten of the year, but still gained some momentum with three of the films placing in the top twenty of their respective years both internationally and domestically. 2006's Tokyo Drift saw a major decrease in box office receipts reaching only number 46 of the year's films domestically and number 32 worldwide. The franchise, however, would quickly recover from this slump with Fast Five adding additional star power from Dwayne Johnson and landing the franchise in a top ten position domestically and worldwide at number 6 and 7 respectively. Furious 7 has been the best received in box office rankings so far at number 5 domestically and number 3 worldwide for 2015, though this could soon change with Fate of the Furious.

The Brands Of The Furious

As with most major franchises, there have been numerous opportunities for brands to appear in the Fast and the Furious films. As the films are so associated with racing, it comes as no surprise that many car companies have jumped at the opportunity to appear in the films of the franchise. The Fate of the Furious showcases a variety of cars, as did most of its predecessors. Dodge is perhaps one of the most notable car brands of the entire franchise in that it has been included in every movie. For The Fate of the Furious, Dodge was involved in a co-branded promotional campaign with featured television spot and social media posts. The brand was also featured in the film through its Charger and Challenger vehicles. The other car manufacturers featured in the film included Ford which has also been featured in all eight films though in a less prominent way, Mercedes Benz which has been slowy making its way into the franchise since 2013's Fast and Furious 6, and Chevrolet which overtook Dodge as the most visible car brand in the film. The Fate of the Furious also marked the first appearance of a Bentley car in the franchise.

The Fate and the Furious, however, did not reduce its placement opportunities to cars. Other notable brand appearances in the film include Bose whose headphones are worn by Cipher's assistants, Dell who provide the computers for Cipher's team, Apple who provided iPads and iPhones, and HiSense whose televisions appeared throughout the film, replacing Toshiba from Furious 7. Under Armor was also highly visible throughout the film, with Dwayne Johnson wearing the brand for most of the film - which makes sense, since he is also a celebrity endorser for the brand.

One brand which shows just how well product placement can work throughout a franchise is Corona, which was seen in many of the movies, with the brand being used as the official beer of the group. This was established in the first film, with Dom pointing out to Brian that he could drink anything he wanted as long as it was a Corona. While it may seem unlikely, Corona never had to actually pay for its presence in the series, which is a perfect example of how some of the best placement in films is unpaid. However, in an unexpected move, Corona did not appear in Fate of the Furious, perhaps signaling the evolution of the franchise after the death of Paul Walker. The gang, however did drink other Anheuser Busch drinks Stella Artois and Budweiser, so it was no major loss for the company.

Getting Your Brand In A Franchise Film

The Fast and the Furious is not alone as a franchise which has become admired by the masses and certainly shows just how useful placement can be for brands. Check out some of our other blogs on previous promotions and marketing strategies, and see what opportunities exist for your brand!

If you'd like to have your brand featured in a franchise film, why not check out our Product Placement 101 guide to see just how you can dominate screen time!  Check out the link below.