Influencer marketing continues to evolve, making it important for brands to keep up and better understand just how the landscape is changing and how they can most effectively engage with social influencers and their audiences.  Influencers are more and more becoming part of every brand's marketing landscape, and their experiences of what has worked in past campaigns, and what they believe are essential components of future brand campaigns makes their feedback invaluable.

Hollywood Branded interviewed over 650 influencers to discover what they believe are best practices, and to learn how brands can find higher campaign success in the partnerships they form together.   In this blog, Hollywood Branded provides a general overview of our 2018 Influencer Marketing & Brand Partnerships Report, infographic takeaway and a guide for brand and agency marketers for the years to come. 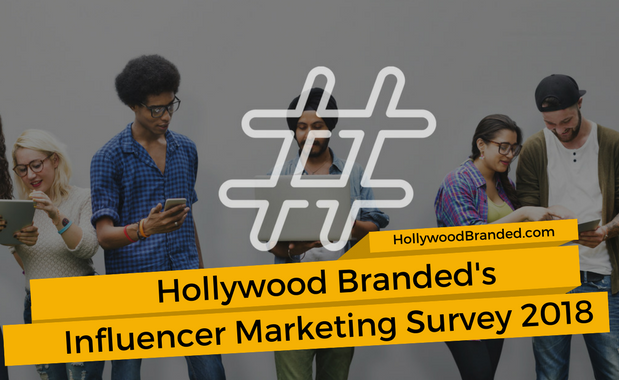 An Introduction To The Survey Report

Influencer marketing provides brands an opportunity to have these hyper connected content producers promote their products in a meaningful way, helping the brand to stand out, build awareness and grow. Yet brands considering influencer partnerships need to be prepared, as it is very easy to make missteps along the way. From finding the right influencers, managing communication to ensure the end goal result is obtained, making sure the messaging is authentic and on point to a targeted audience, to negotiating compensation, measuring campaign success, and building long term partnerships, brands and their agencies risk losing considerable money and investment if they don’t have the right knowledge to make success happen.

The influencer feedback and comments in Hollywood Branded's Influencer Marketing & Brand Partnerships 2018 Report offers a detailed understanding of the industry and additionally provides over 300 tips and insider advice on how brand marketers can better partner with social media influencers to create impactful campaigns which will resonate with consumers.

The Infographic
Hollywood Branded created the below infographic to provide a top line overview of the survey's results and statistics. Check it out below:

Over 660 influencers across various specialty niches and social media platforms responded to our survey, providing us with valuable insights into the current landscape of influencer marketing and how they operate within it. Most of our respondents were US-based with just 12% coming from elsewhere. The other countries which respondents came from included Canada, the United Kingdom, Germany, United Arab Emirates and Australia. It is also interesting to note that 87% of respondents were female, aligning to the fact that most social influencers are female.

Newer platforms do seem to be lagging behind with only 36% of respondents using Snapchat, which does make sense considering the platform has not been as friendly for marketing as others. Pinterest was another popular platform to a lesser extent with almost 20% using the service. Other platforms used by some of the respondents included Google+ and YouTube. And of course, self-run blogs, which the majority of influencers had.

Instagram, as one might expect, had the greatest amount of respondents with between 25,000 and 500,000 followers at 20%. Bloggers tended to have more of a follower base which makes sense considering that blogging has existed for much longer than the other social media platforms. Just over 56% of bloggers had under 25,000 followers, while over 40% had between 25,000 and 500,000 and 3% had over 500,000, almost double that of the other platforms.

With so many categories that an influencer can write about it is difficult to figure out just what topic is most popular. Some of the most popular topics among influencers included fashion, food, lifestyle and travel.

This comes as no surprise since they are some of the most relatable topics out there with most people being interested in them at some capacity, as well as categories ripe with brand partnership opportunities.  The other topics which proved popular included DIY, Fitness, Home Design & Decor, Life hacks, Parenting and Technology. Topics which, again, have a strong built-in followers base.

While some influencers use social media and blogging as a way to earn extra money, there are those that have become quite wealthy simply from their social media abilities. Unfortunately, this tends to be much more of a rarity than the norm. However, that doesn't mean that influencers need to be making millions of dollars to make online content creation their full time job. In fact, over half of the influencer respondents reported that their brand partnerships, blogging and posts served as their primary income source.
Over 52 % of the respondents of our survey consider blogging to be their main source of income, proving that many influencers take their role seriously, and truly want to work with brands for partnerships. For these influencers, it has typically taken years for them to gain enough traffic to be able to make an income, and they have honed their skills along the way.
A common frustration for influencers was the amount they are paid by brand partners.  In fact there is little standardization across influencers when it comes to fees. According to our survey 47% have set payment rates, 17% do not, and 36% say that it depends on the scope of work.
Find Out More About Influencer Marketing And Access Our Survey
To learn more about influencer marketing, check out these six blogs we've written that dive more deeply into how you can successfully create an influencer marketing campaign: