Social Media Is (not) Okay

Social media can be the absolute worst. But it can also be the absolute best. The trick is finding the sweet spot, and that’s exactly what writer and director Quinn Shepard’s new film Not Okay did with its marketing campaign. The film, which showcases the highs and lows of social media and mainstream attention, started marketing using TikTok during the filming process and gained viral status along the way! What better way to market a movie about social media obsession than through social media itself?

This highly innovative and successful campaign may set a precedent for future film marketing. In this blog, Hollywood Branded will take a look at Hulu’s Not Okay social media marketing campaign. 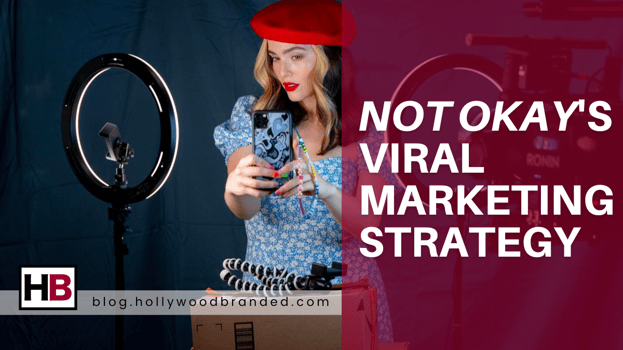 What Is Not Okay About?

The dark comedy satire follows Danni Sanders, starring the talented Zoey Deutch (seriously, this woman has some serious acting chops). Warning: she is an “unlikeable female protagonist” as the film so lovingly labels her with a subtle wink. Danni is a depressed, young, privileged woman who yearns for friendship and relevancy. To help achieve her goals of fame, she concocts a scheme and fakes a trip to Paris to gain Instagram followers and the attention of her co-worker, weed influencer Colin, played by heartthrob Dylan O’Brien. She successfully fools people by using photoshop to transform her NYC apartment into iconic Paris locations.

However, her scheme works a little too well when people believe she is a victim of a terrorist attack after she posts a selfie in front of the Arc de Triomphe minutes before a set of coordinated bombings go off around iconic Paris landmarks. Instead of coming clean, she settles deeper into the lie by weaving a story about her traumatic experience in the attacks. The lies soon spin out of control. Without spoiling the movie, the rest of the film explores people's obsession with social media, co-opting others’ suffering for attention, and the media’s love of lifting up privileged white women’s trauma stories.

For a movie that explores influencers and influencer marketing, Not Okay’s influential social media campaign happened kind of organically. In an interview with Digital Trends, Not Okay writer and director Quinn Shepard discussed how the film's social media presence came to be. She stated that there was a lot of paparazzi coverage from the first day of filming which created a lot of buzz in the media for the movie. Apparently, Quinn and Zoey felt that the attention was very “meta” because Danni’s goal in the film is to go viral and that was happening in real life. “Immediately, it really sparked something in the two of us. We were like maybe there’s really something here, leaning into the world that the film exists in, TikTok and influencer culture, and all of that in the marketing and being really meta about it” Shepard told the interviewer. With Searchlight Pictures on board, Quinn and Zoey started a TikTok account. “It was genuinely us writing captions and coming up with stuff,” Quinn said in the interview.

It was a success from the very start. The pair began creating content using viral sounds and trends which quickly racked up views and likes. Then, they went mega-viral with a video of Dylan O’Brien transforming into Colin, his weed-obsessed, peroxide blonde Not Okay character.

Now, the movie’s account has almost 340k followers, and over 12.7 million likes!

What makes this strategy even more interesting is that the TikTok content was filmed and posted during filming and not after the fact. This kind of strategy can be useful for crowdsourcing, generating buzz, and even enticing brands to include product placements.

The Man Behind The Curtain

When viewers started requesting more content, Quinn and Zoey realized they could not handle the TikTok account by themselves. That’s when they brought in Reece Feldman, a production assistant and TikToker with 855k followers and over 38.7 million likes, as the “on-set content capturer.” His addition took the campaign to the next level as he was able to engage with the audience and post content more frequently. He recently chronicled his journey from being a production assistant to his role on the Not Okay set.

Fun fact: you can also watch his cameo in the film!

if anyone can come up with a job title for me, that’d be great 🥲🎥 #filmtok #notokaymovie

Why Does Not Okay's TikTok Marketing Work?

Simply put, Not Okay’s TikTok marketing strategy works because it connects and engages with the film’s target audience— Zillennials — in the audience’s preferred format. It’s marketing 101—know your audience. In a 2021 GoodQues TikTok Entertainment Study, found that 58% of TikTok users stated they are “interested” or “very interested” in seeing more film studio content on the platform. And in another 2021 survey of TikTok users aged 18+, 41% said when they discover a new film on TikTok, they look up where they can see it. It’s clear that TikTok audiences want more movie content and Not Okay delivered on that front. It does help that the film was made by and stars Millennials & Gen Zers who understand social media.

Even with the film being a satire and poking fun at social media culture, the film is not anti-influencer or anti-social media. Instead, the cast and crew leaned into the fun and sometimes absurd nature of social media and embraced its positive aspects to market the film. Their TikTok is how I was introduced to the film and made me super excited for the release months before they even finished the film. I hope to see more of this kind of marketing in the future (*hint hint* film studios).

Don't worry, there's more... like a lot more! Check out some other similar content we've generated below.