Olympic Celebrity Endorsements During The Games

Brands Who Use Athlete Star Power To Showcase Their Sponsorships

When the Olympics starts, there is a blackout period where non-sponsors typically can't use Olympic athletes in their advertising campaigns.  Why? Well, for some reason, those sponsors who are paying 100+ million dollars to the Olympics every 4 years want the ability to stand out and have exclusivity - without other brands muddying the waters.  And those brands are typically some pretty big names, like Toyota, United Airlines, Alibaba, GE and Visa. This year we saw the loss of McDonald's as a sponsor, which is a brand known for capitalizing on Olympic athletes in their commercials.

Which means athletes who partner with official sponsors can make some extra big bucks... but all those others must wait until the Olympics are over to create their own partnerships with non sponsors.  In this blog, Hollywood Branded shares some of the Olympic celebrity endorsement commercial highlights during the games, where brands leveraged star athletes to stand out in this very key time period where over 22 million average tuned in potential customers the first week alone. 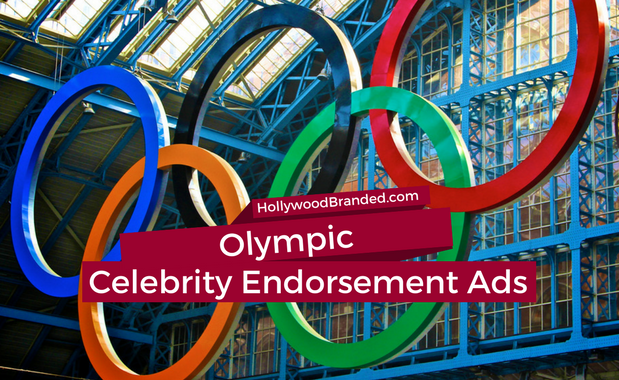 A sponsor of the Olympics since 1928, Coca-Cola is one of those brands who has figured out how to leverage its partnerships.  This year its theme is "Together as One" and running TV commercials featuring the South Korean figure skater Yuna Kim and the very popular actor Park Bo Gum.
This was run in South Korea... and Park Bo Gum held the Olympic torch in January 2018, ahead of the Winter Games in Pyeongchang, South Korea as part of the commercial shoot. 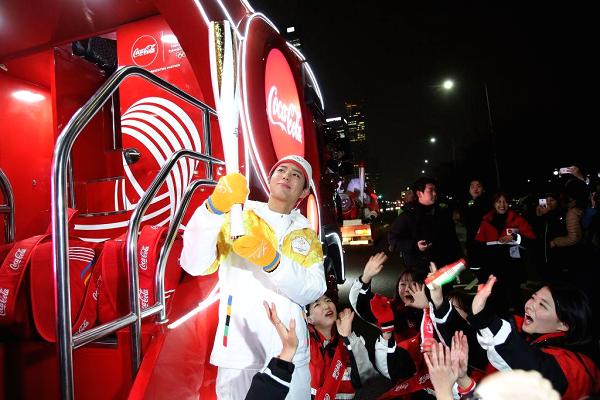 And there is always an exception to those who don't necessarily follow the rules of blackout dates.  Dunkin' Donuts, The Official Coffee of the NHL, brought their year old spot out of retirement to run it alongside the Olympics, as Meghan Duggan stars. Meghan is an ice hockey forward who represented the United States at the 2010 and 2014 Winter Olympics, winning two silver medal.
And since the women's USA team WON the gold... Dunkin' Donuts did the smart thing by re-promoting this partnership.
Brewed For This spot: (original premiere NHL season)
The commercial's description: "As the Official Coffee of the NHL, Dunkin’ Donuts is brewed for all the moments that make hockey unlike any other sport. Early mornings. Hard work. Game time. Dunkin’ Donuts is brewed for this."

P&G continues its "Thank you Mom" Olympics campaign with a series of six ads showing athletes' struggles with prejudices featuring Gus Kenworthy, one of the first openly-gay action sports athletes at the Olympics, and Emirati figure-skater Zahra Lari, among others.

Love Over Bias
The commercial's description: "P&G athlete and silver medalist freeskier Gus Kenworthy is happier and skiing better than ever since coming out as gay. With his mom and #1 fan, Pip, cheering him on he is competing in this year’s Olympic Winter Games in Pyeongchang. Pip has always been both supportive of and inspired by her son’s courage to be himself, love who he loves, and challenge the biases of others. Watch more Love Over Bias stories at https://www.youtube.com/watch?v=JSWyr.... Thank you, Mom."

Samsung - Dutch skaters Sjinkie Knegt and Suzanne Schulting
In their ad using the Dutch skaters Sjinkine Knegt and Suzanne Schulting, Samsung has the duo wearing its smart suits for training.  The suits help with posture for speed.
Samsung SmartSuit - Tech
The commercial's description: "Samsung SmartSuit is the first short track suit that measures down to the millimeter how deep the skater is. Is this the secret weapon for Sjinkie Knegt and Suzanne Schulting on the way to Olympic gold? As a sponsor of Sjinkie Knegt and Suzanne Schulting, Samsung Benelux developed the Samsung SmartSuit and the application especially for the two in the run-up to the Olympic Winter Games in Pyeongchang. This is a unique new form of sponsorship. With the help of technological innovation, the brand actively contributes to the performance of athletes. The link with sport is not new to Samsung. Samsung has been the main sponsor of the Olympic Games for 29 years."
United Airlines - Erin Hamlin, J.R. Celski and Nikko Landeros
They Can Fly spot:
The commercial's description: "U.S. Olympians Erin Hamlin, J.R. Celski and Nikko Landeros are all masters of their craft and ready to represent the United States of America at the 2018 PyeongChang Winter Olympics. But, as awesome as these Olympians are, they can't actually fly. They need some help from the heroes at United Airlines to get them off the ground and in South Korea in time for the games."
To South Korea spot:
The commercial's description:  "Helping superheroes fly for 38 years. Proud to fly Team USA."
Visa - Mark McMorris, Mikaela Shiffrin, Seung-Hi  Park, Sara Takanashi, Chloe Kim, Seun Adigun, Ngozi Onwumere and Akuoma Omeoga
Visa officially showcases and supports 54 athletes through its Olympics sponsorship, promoting contactless cards and wearable payment devices.
Finding New Finish Lines
The commercial's description: "You keep finding new finish lines. We keep helping you cross them. Like the incredible athletes of #TeamVisa, we believe in exploring what’s possible and pushing past the expected. We’re inspired by those who treat every finish line like a new starting line, and see every opportunity as a chance to prove that we can all do more and be more than we ever thought. Check out Visa.com for more on #TeamVisa, and to learn how we’ll reset finish lines through our innovative new ways to pay at the Olympic Winter Games PyeongChang 2018. Visa. The official payment technology partner of the Olympic Games. Our #TeamVisa athletes featured here include Mark McMorris (Canada), Mikaela Shiffrin (USA), Park, Seung-Hi (South Korea), Sara Takanashi (Japan), Chloe Kim (USA), Seun Adigun, Ngozi Onwumere and Akuoma Omeoga (the athletes of the Nigerian Women’s Bobsled Team). Visa payments featured include Visa Checkout, contactless credit card, contactless debit card and payment pin (only available at the Olympic Winter Games)."
Working With Celebrities
Did we miss an ad? Let us know!
Whether super-sized influencers or actual celebrities, brands benefit from smart partnerships leveraging the consumer fan base of the individuals they hire to become spokespeople in their commercial ads.

But if you don't want to commit hundred of thousands to millions of dollars for that celebrity spokesperson (and brands take note... if you are not going to be running a national advertising campaign, you really should look at other options), then start looking for other options to appear with celebrities without the monumental costs.  The easiest way to share the limelight with a celebrity is through sponsorships of events that celebrities attend - and where you can get photos to share through your website, social media platforms and distribute to media outlets.  How do you do this? Plan to work with an entertainment marketing agency that has established contacts with talent directly, as well as their management, PR and talent agencies, and who are aware of celebrity events that occur year round. Working with a company that has experience in this space will help you get the results you want. Hollywood Branded Inc. is here to help.

Working with events to showcase your brand in an environment where they are responsible for bringing in the celebrities - and media, is a major benefit for brands.  There are tricks to be sure you keep in mind to be successful, which we share in the following blogs

Download our event calendar below to see what upcoming events may be around prime branding times for your company!