All About The Partnership Between Team USA and Polo Ralph Lauren

Team USA’s Opening Ceremony outfits made waves on Twitter during the opening ceremony of the 2021 summer Olympics in Tokyo. Just like past Olympics, the athletes were dressed in a classic preppy look, trademarked by their official outfitter, Ralph Lauren.

The result of this historic partnership can be seen on the bodies of every Team USA athlete, but there’s more to this collaboration. In this blog, Hollywood Branded shares everything you need to know about the partnership between Ralph Lauren and Team USA. 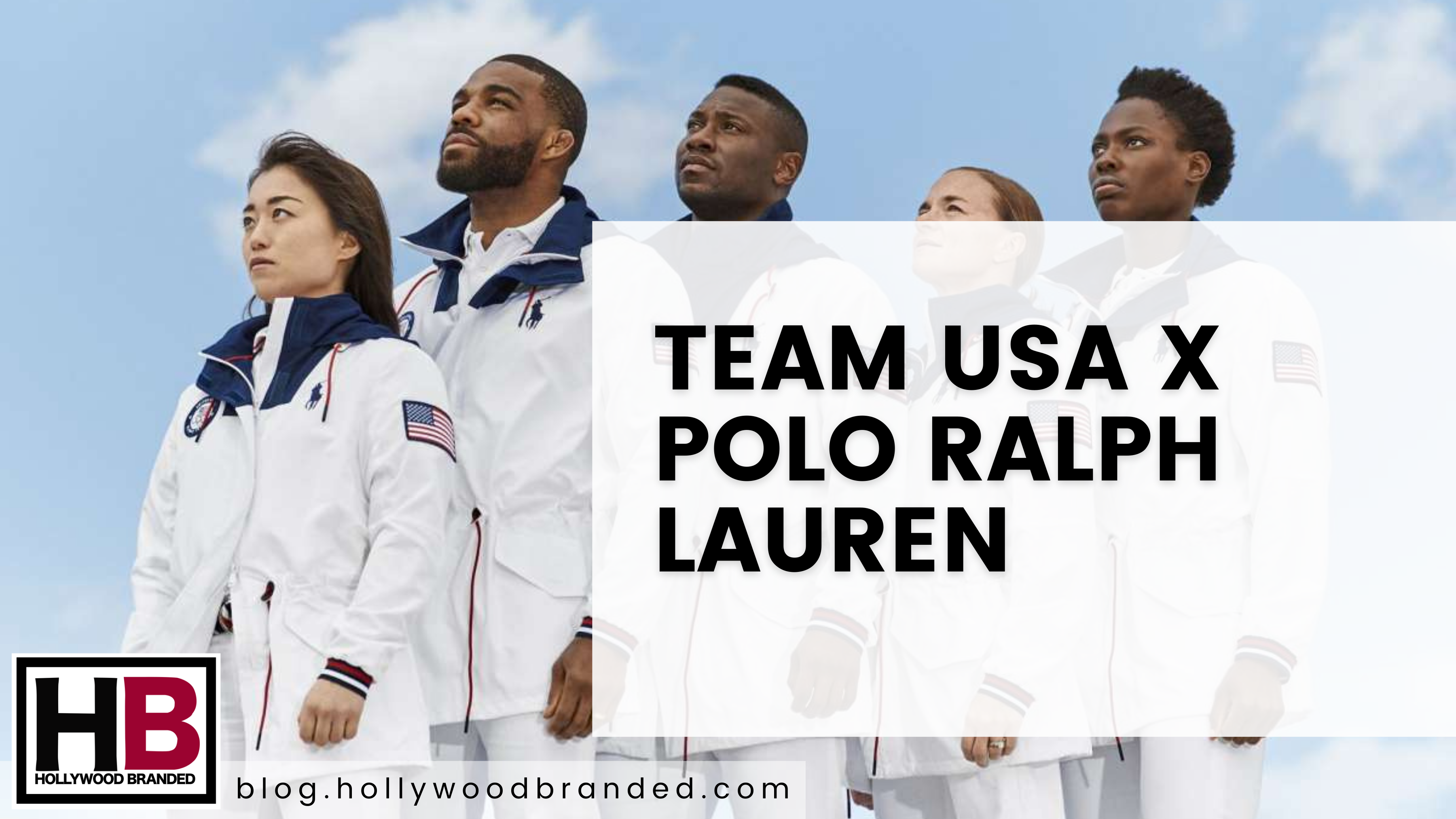 Team USA has been outfitted by Ralph Lauren since the 2008 Summer Olympic Games in Beijing. Since then, they have been the official sponsor of the United States Olympic team. That means they have 7 Olympic games under their belt with 14 ceremonies that require outfitting. This year for the Tokyo games, Ralph Lauren had the practical challenge of providing clothing for 193 athletes—all of whom have varying heights (think gymnasts vs basketball players) and body types (think muscular powerlifters vs lanky synchronized swimmers). On top of that, they also have the more abstract task of designing clothing that captures and communicates a force as powerful as American athletics. To say the least, outfitting an entire Olympic team is no easy task, but with almost 15 years of experience, Ralph Lauren has managed to pull it off time and time again.

The History Of Ralph Lauren And The Summer Games

When it comes to the summer games, Ralph Lauren has stuck to the classic Polo look time and time again. In the 2008 games in Beijing they delivered with their signature navy blue blazer, loose white dress pants, and a white cap.

In 2012 Ralph Lauren provided the athletes with a similar look for the games in London, however this time, the women were given the option to trade out their white slacks for a classic a-line white skirt, and Polo swapped the white cap for a navy blue beret to match the blazer. New additions to the look include chic all-white saddle shoes and a red white and blue scarf. 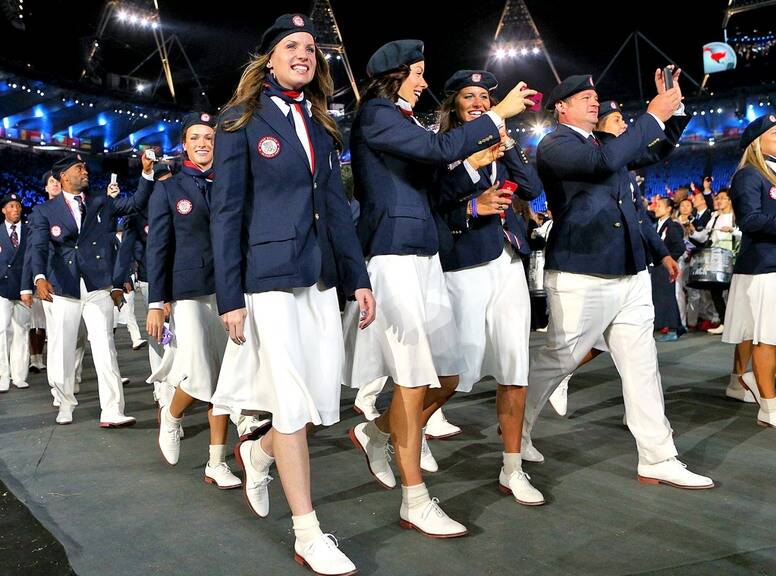 In 2016, Ralph Lauren once again supplied the athletes with the classic navy blazer and white pants in Rio de Janeiro. However, rather than continuing with the previous loose-fitting dress pants, the brand evolved with the times and provided a straight-legged, boyfriend-style white jean. They also provided a red, white, and blue striped shirt and matching red, white, and blue boat shoes. 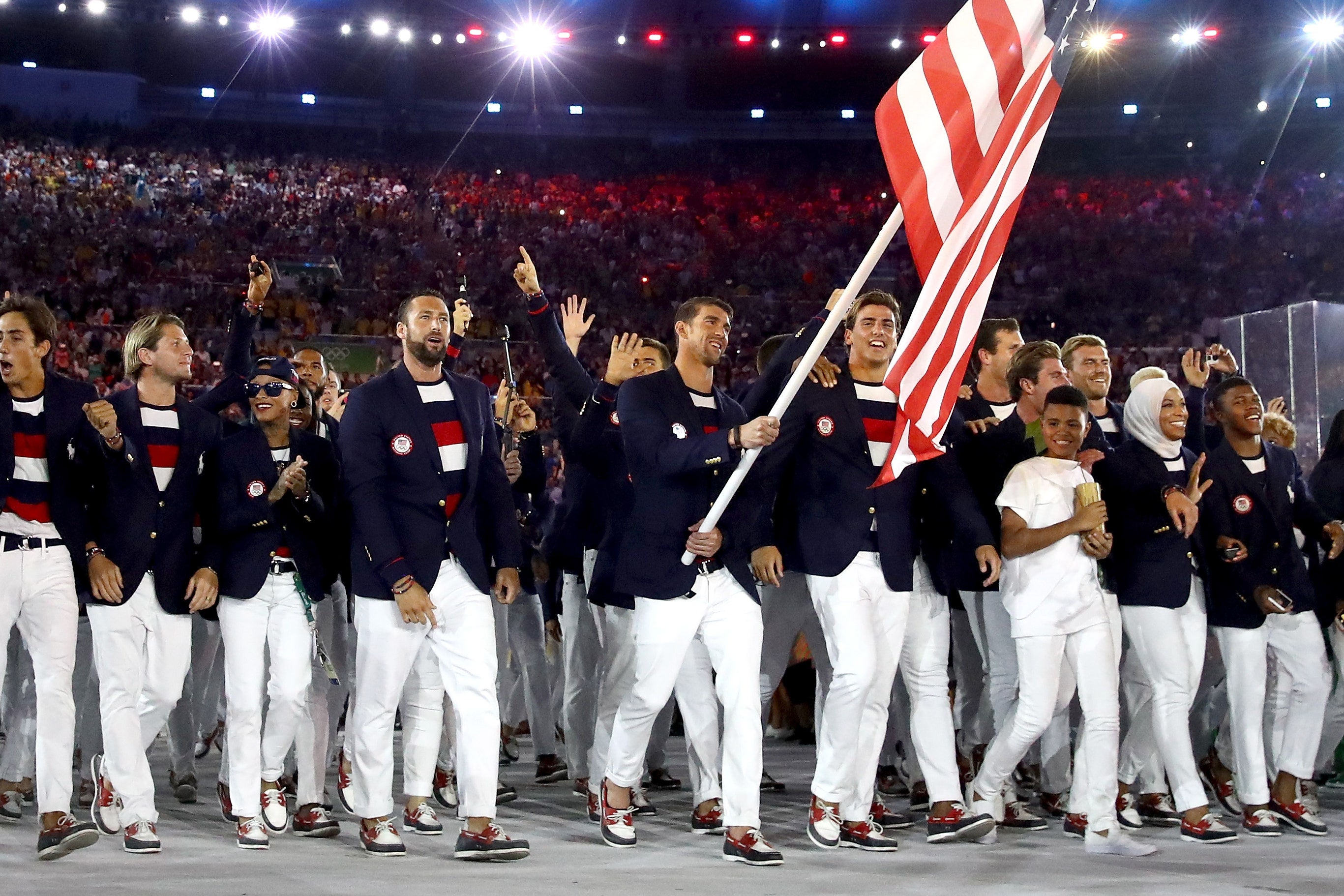 Sticking with tradition, the US Olympians again wore a blue blazer just a few weeks ago for the opening ceremony in Tokyo. This time, matched with a blue and white striped shirt, classic blue jeans (which some athletes opted to cuff), and white sneakers with blue and red stripes to accent the sides. The athletes also accessorized with a American flag scarf, which is tied neatly around their necks, and, in keeping with the olympic committee’s COVID guidelines, a navy mask. 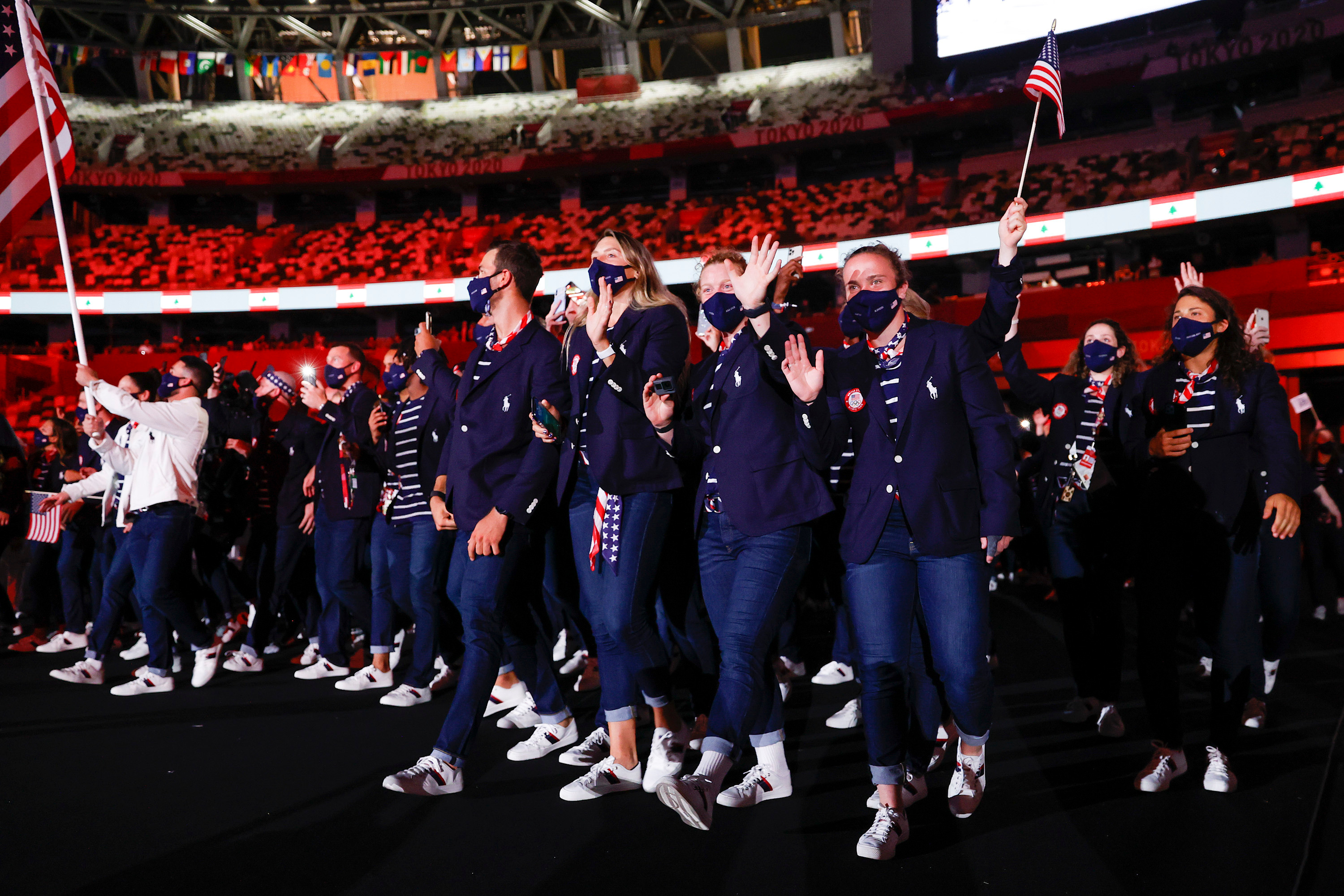 After facing some controversy for outsourcing materials for the creation of Team USA’s 2012 outfits in China, Ralph Lauren has since committed to sourcing and manufacturing all of the products made for the American Olympians domestically. With over 1100 Team USA members to dress, the creation of the team’s uniforms was the driving force to connect processors, manufacturers, and textile artists. Polo partnered with over 30 American companies that all collaborated on the project. Not only do the outfits clothe the greatest American talent in sports, but they also support the jobs of everyday Americans.

Polo is keeping their commitment to invest in the American market, and they are also committing to the longevity of our planet by using more sustainable practices in the manufacturing process. Some of these practices involve a reformed dying process that uses less water and other resources and using fabric that was created from recycled plastic water bottles.

The Olympics serve as one of the biggest stages in the world. This is a huge opportunity for any brand to showcase its designs, but Ralph Lauren has taken the opportunity to showcase some top-tier technology as well. To ensure that Team USA’s athletes feel as cool as possible walking into the heat of the summer Olympics, Polo unveiled what they are referring to as “RL Cooling” technology, which basically serves as a temperature-regulating jacket. The device seen at the top of the jacket regulates the wearer’s body temperature and creates a cooling sensation when they are overheated by blowing cool air on the back of their neck. In keeping with the sustainability thread, research has shown that personal temperature regulation could be the key to lessening the environmental impact of mass heating/cooling units. 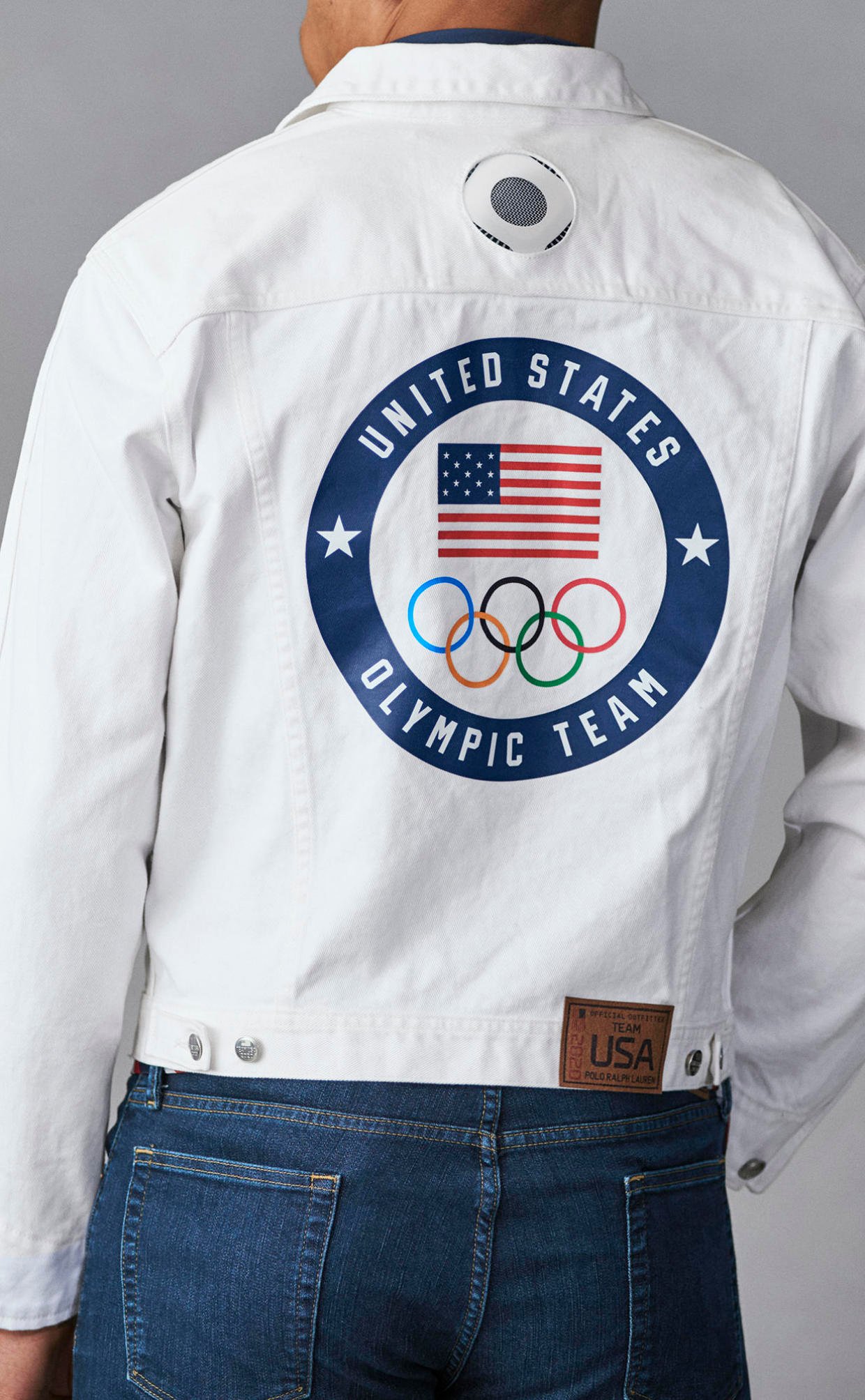 As their Olympic performance suggests so far, Team USA delivers peak performances from every single corner of the team, and their partnership with Ralph Lauren is no different. Team USA’s elite athletics requires elite partnerships, and Ralph Lauren’s commitment to sustainability, technology, and function proves that they are up to standard.

Brands have seen great success in utilizing celebrities to hype up new products on the market, turn already-existing products into bestsellers, and most importantly, draw in a lot of attention to their business. Checkout these blogs to see more celebrity+brand success stories!

Interested in partnering with a celebrity? Read this e-book to learn the best tips & tricks to get them at your brand's event!