The Avengers Save The Day For Brand Partnerships And Licensed Product

Disney and Marvel have put together a monster of an entertainment franchise with The Avengers. The 2012 film destroyed its box office competition, bringing home a whopping $1.5 billion in total worldwide gross ($623 million domestic). As the world gears up for the 2015 silver screen sequel, The Avengers: Age of Ultron, licensed products from costumes to toy cars are set to fly off the shelves, with a bevy of brands on board as promotional partners as well. We look at what a great opportunity this series provides both for branding and for the film franchise.

While Marvel's big-screen hit dominated the box office in 2012, the Avengers brand culture (and stream of revenue) didn't end there. Branded products and services from food to cars continued releasing product with the franchise's visuals and characters, holding superhero-themed contests, promoting and discounting the movie as well as the release of the TV series and game. Brand partnerships to the first film totaled $100 million in marketing support and included Acura, Norton, Petron, Habib, Wyndham, Harley-Davidson, Farmers, Red Baron, Hershey, Dr. Pepper, Visa, Land 'O' Frost, Colantotte, Semantec, and Oracle. The 2013 food and health brand partnership campaign tied together the success of the movie and the Avengers Assemble series with the theme of health and strength, involving Nabisco, DenTek, Listerine, Perdue, and Crunch Pak. 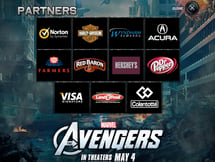 This year, not only are Disney and Marvel gaining additional marketing from similar brand promotional partners, but they are also getting an immense assisted push by licensing partners. Brands that create licensed lines of products from a film are paying a royalty fee for the image rights, as well as a minimum guarantee based on sales expectation.  The items have to be approved by the rights holder, and if any images of actors are depicted or cast, an additional celebrity endorsement fee with licensing payments may be due to the actor.

Brands who have licensed product to The Avengers: Age of Ultron for immediate retail include:

The Avengers: Age of Ultron hits theaters May 1st.

How This Can Help The Production And Studio

Movie studios not only want, but need brand marketers as film partners. The reason? Brands help the studio save millions of dollars through cobranded media and assist the film property into getting in the consumers face at retail - somewhere the film cannot purchase media in.

When a feature film creates an Above-the-Line marketing campaign, they often spend as much on the marketing of the film as they did on the production of the film. That is a lot of millions of dollars. When a brand partner comes on board and provides an outline of where the cobranded media campaign will be, the film can redirect those planned ad dollars, or just choose to not spend them.

How This Can Help The Brands

Not only do participating brands receive extra exposure through the partnered advertisements and promotions, but their whole image gains a new "cool" factor that the huge Avengers fan base would want to associate with. If you're an Avengers aficionado and you need to pick a costume for a themed event, these partnered brands already have your number by making your favorite character's costume. If you're at the grocery store deciding on a savory snack, why would you not purchase the one that gives you a chance to win movie tickets, or oh-so-trendy collectible packaging with all the superheroes? Even for more long-term purchasing decisions such as a credit card, a partnership like this for Visa gives a new youthful, fun, and heroic association to their name in comparison with other credit card companies - millennials just starting to get their own cards may make their choice based on this brand image.

For more insight on how film series and franchises like The Avengers make a great brand partnership jackpot, check out these articles:

How Do You Start A Partnership?

Are you interested in integrating product placement into your entertainment marketing mix, but simply dont know where to start? There is so much more to product placement than you may think and it is important to be educated about the key tactics to best fit your brand. Download our Product Placement 101 Infographic to start learning more today!