Harry Potter is one of the most successful film and book franchises of our time. It catapulted the author J.K. Rowling from living on welfare to being a billionaire by creating stories about Harry Potter and his friends Ron Weasley and Hermione Granger.

And throughout the films, despite them being set in a time of magic and well... not quite real life, brands managed to find their way on screen, or natural co-promotional media and retail tie in partnerships. In this blog, Hollywood Branded shares our infographic on the magical Harry Potter brand partnerships. 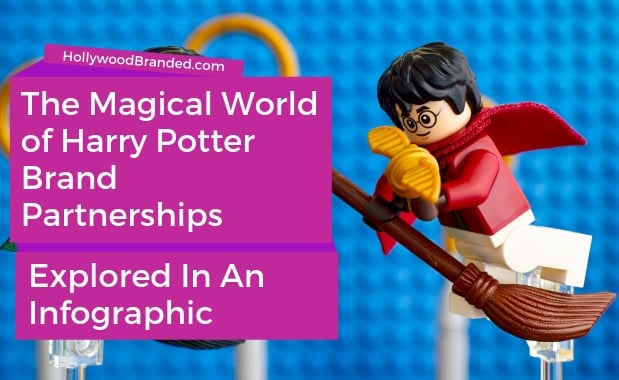 About The World Of Harry Potter

Harry Potter, developed from a series of 7 books by J. K. Rowling, takes place in a world of the non magical (Muggles) and the mystical world of wizards. Harry learns on his 11th birthday that he was orphaned by two magical parents that died trying to protect him from Lord Voldemort. The films and book have captivated the hearts of children and adults alike from around the globe with stories about bravery, friendship, and figuring out how to defeat Lord Voldemort once and for all.

It is clear that these stories were well received. Book sales are valued at over $8 Billion and box office sales over $7 Billion.

The Product Placement In The Film Franchise

Although limited opportunities existed for product placement, the franchise provided a multitude of brands a platform to build advertising campaigns through major promotional and licensing partnerships. In total, only sixteen brands appeared in the movies with none appearing in The Prisoner of Azkaban, Goblet of Fire, Half Blood Prince, or Deathly Hallows Part 2. The lack of placement made the brands that did make it in, even more memorable.

In a number of scenes, the characters were seen wearing Converse throughout Harry Potter and the Order of the Phoenix. This was one of the most blatant forms of product placement throughout the entire franchise. Harry is seen wearing them multiple times and Luna Lovegood is seen owning them as well. This is a genius placement for Converse due to their similar demographic to the Harry Potter fan base. If their favorite characters are wearing Converse then they should too. After the release of the film, Converse came out with a print just like Luna Lovegood’s that could be purchased for a limited time.

Many brands partner with films that take place in fantasy worlds, which we talk more about in 4 Common Myths About Product Placement Debunked as well as the reasons why brands use product placement in our blog 7 Key Tactics to Increase Sales With Product Placement Success. The Promotional Partnerships Of The Film Franchise

Along with the success of the movies came the brand partnerships with Mattel, Lego, and Pez. These companies brought the characters to life in your very home with Harry Potter Clue, Harry Potter Legos, and character Pez dispensers. These toys helped create a franchise that has grown into more they J.K. Rowling ever imagined. From the success of the toys, Universal Studios decided to open their own version of The Wizarding World of Harry Potter at Universal Studios in Orlando, Hollywood, and Japan. They created a life-size version of the Hogwarts castle, Hogsmede, Diagon Alley, and may other iconic scenes and experiences from the Harry Potter Universe. This is creating a whole new generation of Harry Potter fan that get to grow up with Harry Potter and let the older fan re live the magic all over again.

And now for the infographic you've been waiting for!  A recap of all the brand partnerships and product placement in Harry Potter.

And That's A Wrap

While product placement was not heavily used during the Harry Potter films, each product had an important role and helped make the characters more lifelike to the audience. There is no doubt that Harry Potter has helped catapult brands sales from Lego to Universal studios and everything in between.

Check out other movie and brand partnerships in these blogs are team has written:

Ready to take your brand to the big screen and discover your own branding magic?  Our short video will provide a behind the scenes lesson on what it takes to get your brand on screen.  Click below to watch!