How Brands Capitalized On The Million Year Old Market

With Universal Pictures and Amblin Entertainment's highly anticipated Jurassic World: Fallen Kingdom eyeing its debut amidst the summer blockbuster release date, the brand promotions are charging in full force. From vehicles to food, and even a delivery service, a number of creative and unique partnerships are taking the Jurassic World by storm.

When brands build smart strategies to leverage huge summer blockbusters, they win big time.  They are able to engage with the movie's fans who will particularly take note, and bring more excitement into their own advertising campaigns that will help them stand out in general.  In this blog, Hollywood Branded will fearlessly journey through the age when dinosaurs roamed the Earth to bring you the top  brand partnerships with Jurassic World: Fallen Kingdom... 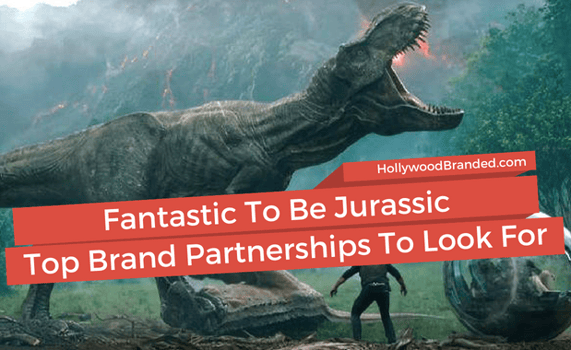 The Jurassic Journey Of Brands Continues

Hot on the tails of Avengers: Infinity War, Deadpool 2, and Solo: A Star Wars Story, Jurassic World: Fallen Kingdom is ready to bare its teeth at the box office June 22nd.

Early projections place the second installment of the modernized classic within the $130 Million to $150 Million range for its opening weekend, which was the similar number given to its predecessor Jurassic World which was expected to hit between $110 Million and $140 Million. The film rocked the industry to the prehistoric age when it exceeded every expectation, and raked in a whopping $208.8 Million opening weekend.

Whether or not the film will capture lightning twice has yet to be determined, but with the long awaited sequel (try over a decade) to Disney & Pixar's The Incredibles, simply by the name of The Incredibles 2, which hits theatres June 15th - there is reason to expect some contention for box office eyeballs and dollars. Either way, it's going to be a busy summer for movie goers.

"An Amazon delivery 65 Million years in the making", that's what they're calling the largest "delivery" in Amazon's history, which arrived to The Grove in Los Angeles on Wednesday, May 30th. 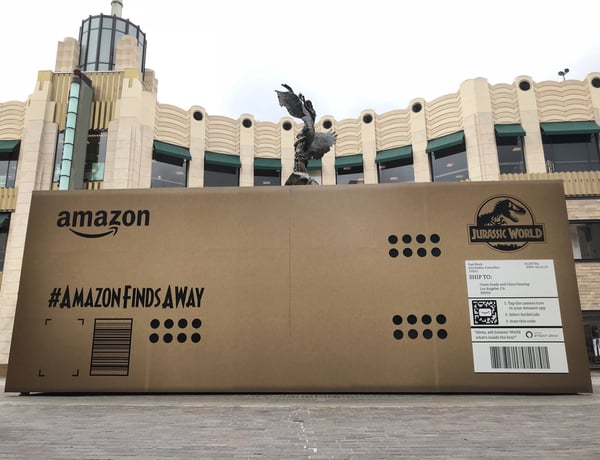 The massive box, touting gargantuan dimensions of 40' L x 14' 9" H x 14' W, is now on display, and with the several air holes and threatening growls, shoppers are certain to walk by with caution in the coming days. When it comes to the exact contents, we will have to wait until June 2nd at 12 p.m. PDT, when the film's stars Chris Pratt and Bryce Dallas Howard will be on-site to uncover the largest mystery known to man... or at least, the marketing campaign.

Don't live in Los Angeles? No problem! Thanks to Alexa fans can join in from the safety - I mean, comfort - of their homes from now until the big reveal, simply by asking: "Alexa, ask Jurassic World what's inside the box…" Through this voice skill  feature fans can get exclusive clues to the mystery inside the giant package, as the 'Jurassic World Revealed Skill' then connects you with someone able to provide more information on the source of all the noise…  a lesson for brand marketers on how they too can start programming voice skills with Alexa.

On June 22nd, players can return to play an interactive audio experience, in the 'Jurassic World Revealed skill' for Amazon Alexa, from Universal and Earplay.

Fans are also encouraged to follow the mystery on social with #AmazonFindsAWay (in reference to Jeff Goldblum’s classic quote, on dinosaur reproduction from the franchise’s original film), which has slowly been gaining traction and chatter as intrigue settles in.

The soon-to-be-unveiled content(s) of the ominous package are set to remain on display until June 10th.  Have any clue as to what it might be?

Since the dawn of the dinosaurs on Isla Nublar the preferred transport vehicle was a Jeep, painted in the classic Jurassic Park green, orange, yellow, and brown. And since this past Superbowl Jeep has been boasting the long-standing partnership.

Directed by Colin Trevorrow, Director of Jurassic World who then passed the torch to J.A. Bayona for Jurassic World: Fallen Kingdom, the 60-second commercial paid homage to the iconic scene from the 1993 film in which Jeff Goldblum’s character, Malcolm, narrowly escapes danger while in the back of a Jeep Wrangler as he is chased by a frightening T-Rex.  What is excellent about this partnership is that it is continuous. Not a one and done, Jeep has created a long standing partnership with the film that makes it all the more authentic.

25 years later, Goldblum is behind the wheel of the all new Wrangler with more technology and legendary off road capability, as he is again pursued by the T-Rex.  However, in a twist of fate, Goldblum chases down the dinosaur. According to social media monitor RelishMix, the spot was a huge success generating 39.7M views in its first 24 hours online following the Big Game.

Closer to the film's release, Jeep was featured prominently again as part of Amazon's 'Largest Delivery' campaign as the mystery box was escorted by a fleet of branded Wranglers, to mark official immersive approval.

As a first time partner the go-to nacho chip will proudly wear Fallen Kingdom packaging, limited to the select retailers in the United States. The franchise's logo will take over the Nacho Cheese and Cool Ranch flavors, and feature iconic franchise dinosaurs: T-Rex and Blue, the raptor companion of Chris Pratt's character Owen Grady.

The campaign also includes a fun incentive for fans through the 'Track. Rescue. Win' Sweepstakes. Each specially marked bag will bear a code that's then entered online, where participants then will help rescue dinosaurs from the volcanic eruption engulfing the island. 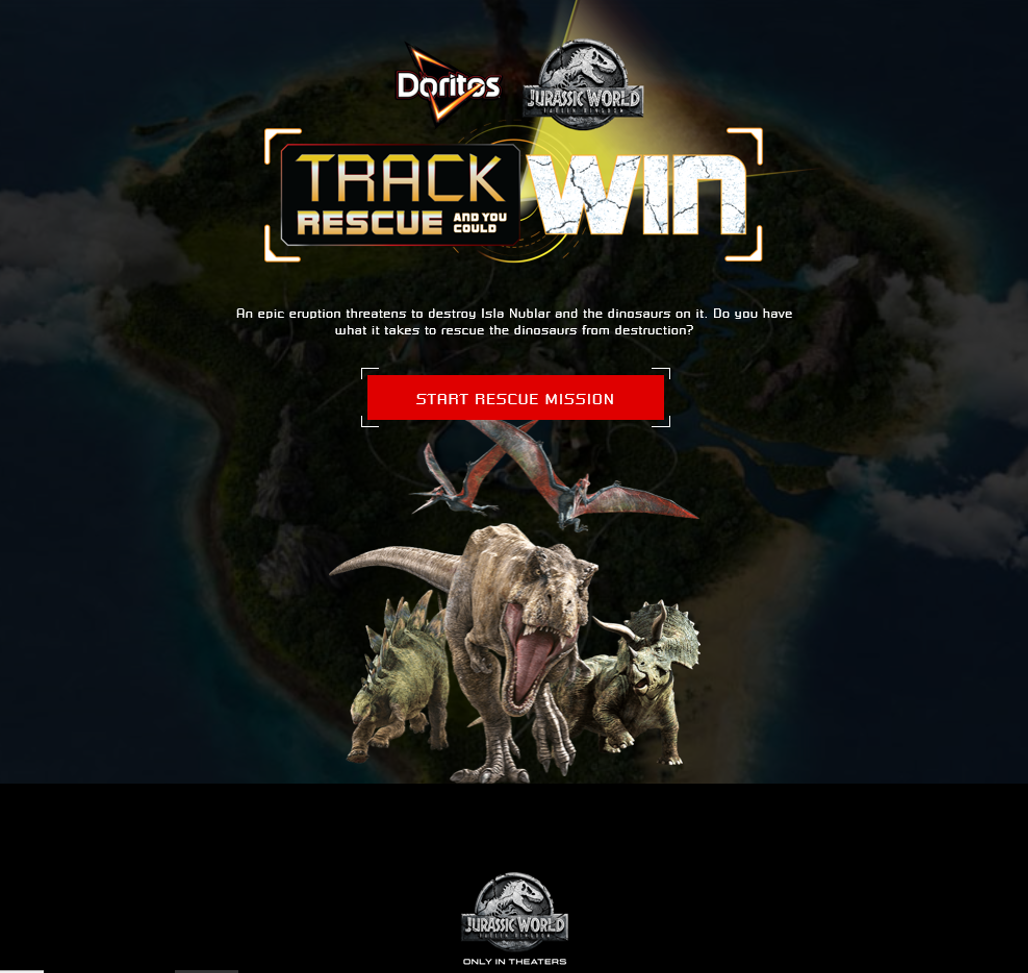 And while this particular promotion is limited by region, overseas territories will still get to enjoy the Jurassic fever for a limited time with a Raptor inspired “Blue” chip.

Also in a first-ever national promotional partnership with Universal, the soft drink company will also be taking to a different look. Four special edition collectible can designs will feature Jurassic 'hero' dinosaurs such as the T-Rex, Blue, and two mysterious new comers. Collect them all for a chance to win in an online sweepstakes, just looked for the marked packaging at a retailer near you! 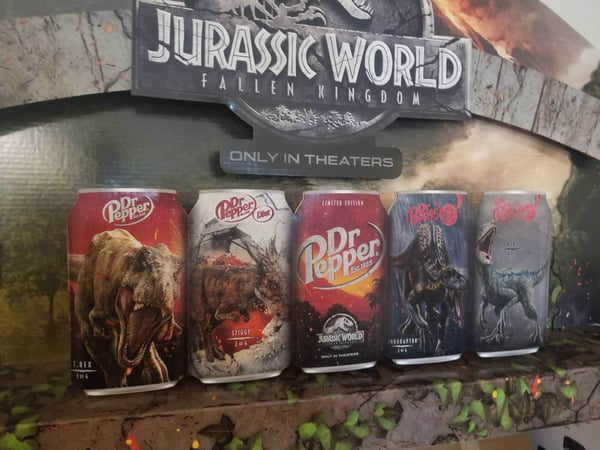 At the New York Toy Fair this past Spring it was rumored that Dr. Pepper products would make some appearance within the film, which if that's the case, certainly sheds light on the brand new co-promotional marketing campaign betwixt the two entities. We'll be sure to keep our eyes out for Dr. Pepper in the film... product placement at its best!

Last on our list is the return that we have all been waiting for... Jurassic themed Blizzards from Dairy Queen! This highly anticipated partnership carries over from the same one started in 2015 with the release of Jurassic World, and as before will feature a Jurassic Park themed flavor, packaging displaying key moments and characters from the movie, and in-store displays. 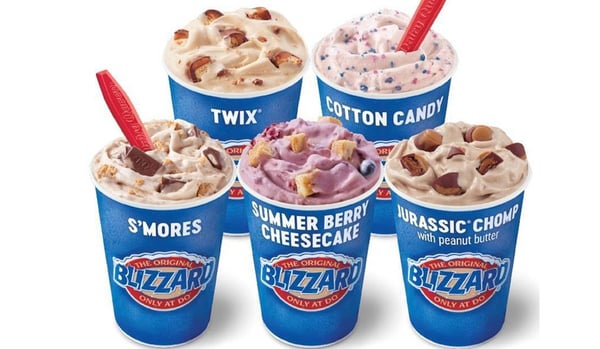 And while inherently there is no massive difference from before, keeping true to the chocolate and peanut butter combo, fans can look forward to the Jurassic treat at their local Dairy Queen, available now!

Interested in learning about how other brands have leveraged franchise film campaigns? Check out a few of our other blogs to see all the creative ways there are to leverage the entertainment industry when it comes to marketing!

Interested in learning how your brand can leverage a film partnership within your own advertising and retail marketing?  Check out our Product Placement & Promotions 101 Guide that walks you through the steps you need to know to make a smart strategy plan.