The Most Effective Celebrity Endorsements For Super Bowl 2021 Ads

The Best (& Most Expensive!) Commercials Of The Year!

Super Bowl LV may be over, but we're still analyzing the commercials! Our agency eagerly awaited the high priced ads that feature celebrities and other big names on TV’s most expensive night, but not as many people got to see them live this year. Compared to 2020, viewership dipped to 96.4 million, with a cost of $5.5 million for a :30 second ad, and CPM of $57.05 – versus $54.90 for 2020’s Super Bowl.

Last year, brands paid a record $5.6 million for a 30 second spot. Although the cost did not rise for 2021, the $5.6 million does not include the high price tag of celebrity cameos, famous directors, or a longer 45-second or one-minute ad. In this blog, Hollywood Branded dives into the 25 brands that used celebrities to enhance their 2021 Super Bowl LV Commercials. 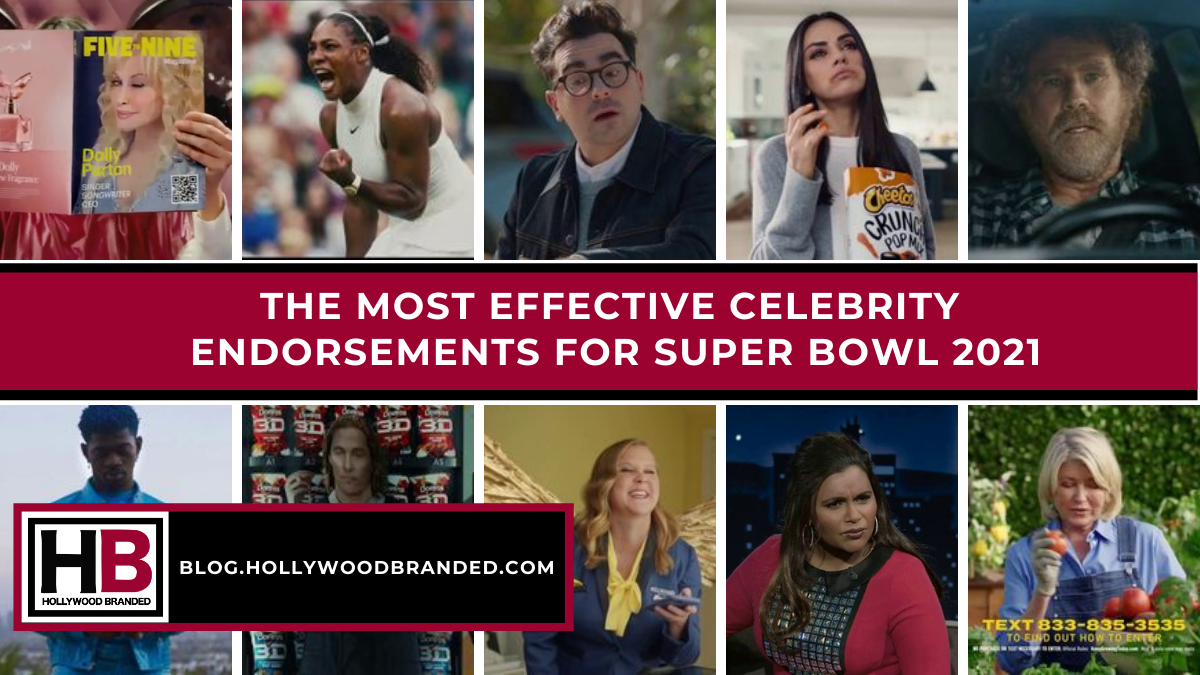 Bruce Springsteen stars in Jeep’s 60 second spot, which takes place at US Center Chapel in Lebanon, Kansas. The ad aims to remind people that the hope and spirit of America lives within the land and we must remember that the soil we stand on is common ground.

Although a few big beverage brands such as Coke, Pepsi, and Budweiser are foregoing their spots this year (for the first time in two decades!), several stars made appearances across four beverage commercials. Pepsi won’t totally be on the sidelines, as they are sponsoring this year's halftime show.

In their 60 second spot, Bud Light reunites characters from classic past commercials. The Bud Light Legends who save the day include Post Malone, Cedric the Entertainer, Dr. Galazkiewicz, the “Real Men of Genius” singer, and the “I love you man” guy.

Michelob Ultra partnered with the Environmental Media Association for sustainable protection as the first large-scale Super Bowl advertiser to do so. Their commercial poses the question “Are you happy because you win? Or do you win because you’re happy?” Throughout the commercial, famous athletes are seen sharing cold beers with their loved ones.

Michelob Ultra Organic Seltzer: “All Star Cast”
Michelob Ultra promotes their new organic seltzer with cameos from a variety of “celebs” in their 60 second spot. However, things are not as they seem when actor Don Cheadle reveals that all the “stars” are look-alikes!

A game within the game. Put on your counting hats because Mtn Dew says it will give $1 million to the first viewer who can correctly guess the amount of bottles shown in their 30 second spot. Mountain Dew uses John Cena to promote their first new permanent flavor in ten years, Major Melon.

Seinfeld’s Jason Alexander is the face of Tide’s one minute ad, literally. Alexander’s face is featured on a teenage boy’s hoodie as viewers look back at how dirty the sweatshirt really is. After seeing the journey of the hoodie, Tide’s new Hygienic Clean Heavy Duty 10x detergent is promoted, because it’s dirtier than it looks! This is Tide’s fourth appearance in the Super Bowl in the last five years.

In their first ever Super Bowl appearance, Scotts Miracle-Gro is offering a promotion sweepstakes in which 42 people will win their dream lawn and garden. However, Martha Stewart ensures viewers that her garden will always be superior. Throughout the 45 second ad additional celebrities such as John Travolta and his daughter, Leslie David Baker (aka Stanley from The Office), NASCAR driver Kyle Busch, Carl Weathers, and Peloton instructor Emma Lovewell show off their lawns.

Wayne’s World is back! Mike Myers and Dana Carvey reenact their SNL characters and encourage people to buy takeout from local restaurants. They assure viewers that they would never try to manipulate their audience with predictable tactics such as cute babies, glamour shots, or celebrity cameos. However, they end up doing all three. Cardi B appears and encourages everyone to eat local as well.

Married couple Ashton Kutcher and Mila Kunis join Shaggy to promote a combination of Cheetos Crunchy and Cheetos Popcorn known as Cheetos Crunch Pop Mix. Shaggy coaches Mila on how to tell Ashton she did not steal his snacks using his 2000 hit song, It Wasn’t Me.

In their 60 second spot, Doritos promotes Doritos 3D Crunch with help from Matthew McConaughey. The commercial follows #FlatMatthew who is struggling with his new look. In one scene he is a guest on Jimmy Kimmel along with Mindy Kaling. Luckily, McConaughey is able to get back to his normal self by eating Doritos 3D Crunch, an update to 1998’s Doritos 3D.

This year, Frito Lay rounded up many NFL greats such as Troy Aikman, Deion Sanders, Peyton and Eli Manning (and even their father!), and more. Marshawn Lynch narrates The Night Before The Super Bowl as fans watch past stars munch on their favorite Frito Lay snacks including Lays, Tostitos, Cheetos, and Doritos.

Comedian Brad Garrett stars as Tony Bolognavich, the self proclaimed "King of Cold Cuts" in Jimmy John's 30 second Super Bowl debut. When Bolognavich discovers that Jimmy John's are invading his sandwich shop turf, he is not impressed by their high-quality, low-priced subs.

In their sixth Super Bowl appearance of the decade, M&M’s goal for their 30 second spot is “connecting people and finding ways to bring people together, especially coming out of a pretty strange and tumultuous year,” according to Schitt’s Creek star Dan Levy. Levy makes an appearance in the ad, promoting M&M’s as a way to apologize for inconveniences.

Klarna’s western-themed ad is their first ever Super Bowl spot. 4 Maya Rudolphs on horseback show viewers how they can split up payments without paying interest in this 30 second ad.

In both of Rocket Mortage's 60 second spots, Tracey Morgan shows viewers the difference between being pretty sure and being certain.

StateFarm Insurance ran their first ever Super Bowl commercial featuring Patrick Mahomes, Aaron Rodgers, and of course Jake from StateFarm. It also features their stand-ins for the commercial: Drake as Jake and Paul Rudd as Mahomes.

Nick Jonas, who has been open about his experience with Type 1 Diabetes, represents Dexcom in their 30 second commercial. Dexcom is a glucose monitoring system for Diabetes management. Unlike traditional finger sticks, Dexcom’s technology is more futuristic, as explained by Jonas.

Amazon’s 60 second spot shows a female executive fantasizing about Alexa taking on a new form in Michael B. Jordan’s body.

In their first ever Super Bowl spot, Logitech uses Lil Nas X and his new song “Montero (Call Me By Your Name)” to promote their gaming company. Their 60 second Defy Logic commercial theme showcases creators, artists, and activists who are defying logic and exceeding expectations to change the world.

Dolly Parton’s classic hit “9 to 5” gets a remix in Squarespace’s minute-long ad directed by La La Land’s Damien Chazelle. “5 to 9” is used to describe after-hours side hustles. The ad communicates how the use of a Squarespace website can turn your passion project into your main gig!

In one of T-Mobile's 60 second ads, The Voice judges experience spotty cell phone service, which causes a miscommunication.

T-Mobile shows that you can share family drama with good phone service. However, they can't help Anthony Anderson when the opposing team gets a little help from Travis Kelce in a game of family football.

Did we miss any? Shoot us an email if you think so!

And if you're interested in seeing celebrity features in past Super Bowls, check out our other blogs:

If you'd like to learn more about how celebrity-driven social campaigns can engage consumers, watch the webinar below!