The Story Behind The “What Do You Do For A Living?” TikTok Trend

We all know the power of TikTok – well, at least we should! The app has taken over most of our lives the past year. Partially thanks for COVID-19 for allowing (fortunately, or unfortunately,) all of us to spend more time at home and on our phones. If you are anything like me, the weekly screen time notification that pops up on your iPhone is actually scary to look at. And if you are anything like me again, TikTok is the app that garners the most attention. I like to think I am not alone as TikTok has skyrocketed in popularity and has allowed new influencers and celebrities to emerge and earn the spotlight.

One viral sensation, Daniel Macdonald (who goes by itsdanielmac) has taken over the app by asking strangers who drive supercars one simple question – “What do you do for a living?” Since his first post on September 27th, 2020 (which currently has 26.5 million views), Daniel has gained over 8.8 million followers on TikTok and 957,000 on Instagram. In this blog, Hollywood Branded discusses the rise of @itsdanielmac and how his videos gain worldwide attention for not just himself, but also the people who he features.

"What Do You Do For A Living?"

Based in Dallas, Texas, 23-year-old Daniel Macdonald found his niche on TikTok back in September 2020 when he and his friends were always seeing high-end, exotic cars in the wealthy suburb of Highland Park Village. According to Daniel, in an interview with D Magazine, his start on TikTok was “kind of a fluke incident… one day I ran into someone driving a Lamborghini with my friend, and I was like, ‘hey, it’s now or never.’ I posted the video and then it just blew up overnight. I had, like, 10 followers at the time. It’s crazy.” Overnight those 10 followers rose to over 2.1 million – truly becoming a viral sensation.

However, posting these videos is not only allowing Daniel to have a fanbase and platform, but it is also allowing those who he asks ‘What do you do for a living?” valuable exposure for their companies.

Back on October 5th, 2020 Daniel posted another one of his videos. This time, Anthony Farrer was featured driving his red Audi R8, which costs at least $142,700 MSRP. Daniel asked his go-to question, “what do you do for a living?” and Anthony responded, “I’m a watch dealer… @thetimepiecegentleman on Instagram.” That subtle plug was seen by 9.6 million viewers and little did he know would be a massive public relation and advertising play for his watch business.

After the video went viral, Daniel’s followers began to follow and comment all over @thetimepiecegentleman’s Instagram account. With the increase in exposure, Anthony and his business partner Marco wanted to thank Daniel for all of the publicity that his video gave the company. What better gift than a brand new Rolex? Very on brand, am I right? Check out the video here. 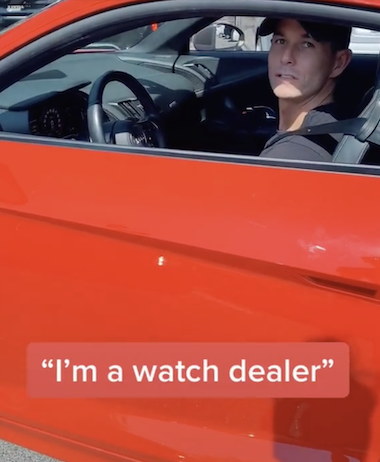 Daniel’s rise in popularity has allowed more doors to open for him – that including being able to meet other TikTokers and top celebrities and ask his staple question. From videos with JoJo Siwa, Paris Hilton, Jason Derulo, Cale Saurage, and even the CFO of OnlyFans Daniel has been able to get a total of 66 million views on those five videos alone.

Daniel has also been able to expand his content to more than just cars. He has started to make videos highlighting yachts and mansions as well.

However, even though hearing what people do for a living in order to be able to afford the cars that they drive is interesting, I find the videos more so inspiring than anything else. Hearing stories of how people didn’t go to college or are working in industries that they didn’t major in is something that shows there are endless possibilities. It really comes down to putting your mind to something – that is how all of these One Percenters were able to afford their super cars. But also look at Daniel. He had an idea and went with it. Now he has millions of followers and opportunities are coming to him left and right (like becoming friends with the Hype House and doing a house tour for one of his videos). Like stated earlier, Daniel can really describe his blow up in two words, “It’s crazy.” That can be you.

The Power Of A Single Video

At the end of the day if you have an idea that you are passionate about, go through with it! Build it out. Execute it. And view your results. Daniel Macdonald is a prime example of someone with an idea can turn it into a mega platform overnight.

This story of Daniel Macdonald doesn’t just apply to individuals, it can also apply to brands. If you are marketer for a company, try something different. Be different. Because you never know when that one video or advertisement will bring followers from a couple to a couple million.

Do you want to learn more about TikTok, all-things social media, and influencers? Check out other blogs written by our Hollywood Branded team!