Why Brands Can Benefit From Micro-Influencer Partnerships

In the shadow of famous well-known social influencers, a new trend has arisen:  the micro-influencer. These individuals have fewer, but very faithful followers.  They often focus on a niche topic, such as health, exercise, food or beauty.  And, what makes them so powerful to brands, is that they also have a very high percentage of likes and comments.

These influencers can generate a higher, more organic reach and engagement on social-media platforms for brands as well.  Why? Well, because a micro-influencer, who posts a photo on their social media account is perceived to be more realistic than compared to a “celebrity-influencer” who you automatically think is posting things as a paid collaboration.  No, the biggest isn't always the best option for every brand. In this blog, Hollywood Branded discusses why brands can benefit  from micro-influencers who have higher engagement than other larger social influencers. What Is A Micro-Influencer

How many celebrities do you follow on Instagram? Many people, including myself, follow numerous famous profiles and different brands on social media. One of my favorite influencers is @SortOfObsessed who urges me to love skincare, use beauty products and buy items from those special brands she really really likes. And I am guilty of doing all three!

Influencers on Instagram and other social media platforms aren’t a new marketing strategy any longer.  And the marketing practice is only growing, with influencer discovery networks popping up all over the place, the better to connect brands with those registered in their systems.  But it is only lately that brands appear to be having a revival of sorts - returning to the yesteryears when they would consider smaller influencer partnerships versus only wanting to work with influencers with hundreds of thousands of followers.

So, what is a micro-influencer, what do they do that is so special, and how effective are they actually?  Let's take a look...

To sum it up, a micro-influencer is a person who has around 1,000-100,000 followers (ok, our team actually considers micro-influencers to be those with a following of 40,000 or less really but the study I'm about to quote uses 100,000) on their social media account. And what differs from being a “regular” influencer, is that these micro-influencers usually don’t have the same “status”. They are still growing their following. These accounts are more specified in one certain area or subject, and because they have a smaller following, they engage back with those that follow them more often.  Which typically leads to true followers who are really engaged and interested in the actual content the micro-influencer is posting to their feed.

For example, a fitness influencer who is widely known may impact millions of people on Instagram and they may be household names at many different gyms, fitness centers and homes.  They will get some pretty mega big brand partnerships due to this, which cost the brand marketer a lot of money.  A lot of the followers on these larger accounts will follow them, but not necessarily so avidly as those of micro influencers, checking in on occasion, and occasionally drifting off into becoming dead accounts.

A micro-influencer within fitness and health on the other hand, will have less followers, but instead they might post “how-to”-videos on how you can get more out of your home-workouts, sometimes with the help of sponsored products, and get a lot of engagement from followers on those posts. The benefit to the brand is that it costs a lot less, and the actual content creation is just as valuable as to that which the bigger named influencer created.  Plus those micro influencers often go above and beyond what the bigger influeners will be willing to do as far as video content and image creation go.  So a brand who works with a handful of micro-influencers may pay the same amount as working with the one larger influencer - but walk away with higher engagements overall... and a LOT more content around their brand to repurpose and share.

Something that’s positive about micro-influencers rather than those larger influencers is that the micro-influencers typically seem more authentic and trustworthy. They are more like “normal” people, with “normal” Instagram accounts who, on their own, answer all comments and therefor seem more real - and like a close friend. And that's why this word of mouth marketing strategy works... it appears real, and it is something most of us humans prefer in the long run.

Ok, so you still are having trouble with the marketing logic doesn’t really pair with the “why should I use a micro-influencer since they have less followers?" fact.  Let's dive in there.

Micro-influencers have the potential to engage with their followers in a more organic way than influencers with more followers can. According to a survey from Markerly, you can see how the activity from the users dropped when an Instagram user got more followers: 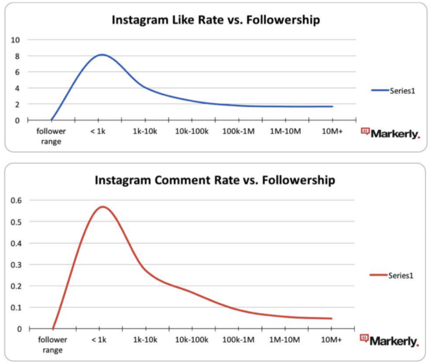 What this means is that companies should try to look for more niche personalities (those micro-influencers we've just been chatting about) with a greater confidence within their target audience group.

Take for example the micro-influencer I mentioned in the beginning, @SortOfObsessed.  She has a total of 47.4k followers and she has an average frequency of more than 6%. She is a great influencer to collaborate with if you have products that are associated with beauty care that would organically fit in her feed!

Are You Thinking About Working With A Micro-Influencer?

Another big plus that I briefly mentioned is that compared to bigger influencers, micro-influencers are cheaper. A LOT cheaper.  So you get to work with lots of influencers versus just one.  And yes, that means it takes more time to organize it all and follow up. But it is totally worth it for your brand.

Keep in mind that it is always important to think about the appropriate fit for your own brand but also for the customer before you begin a collaboration with any influencer, including a micro-influencer.

Be sure to gather a lot of information and fact check that their following is real.  Read our blog 5 Steps To Tell If An Influencer Has Fake Followers to help you make sure that whomever you are working with is really legit.

And also download our infographic that provides great information on how to grow your brand with social influencers! 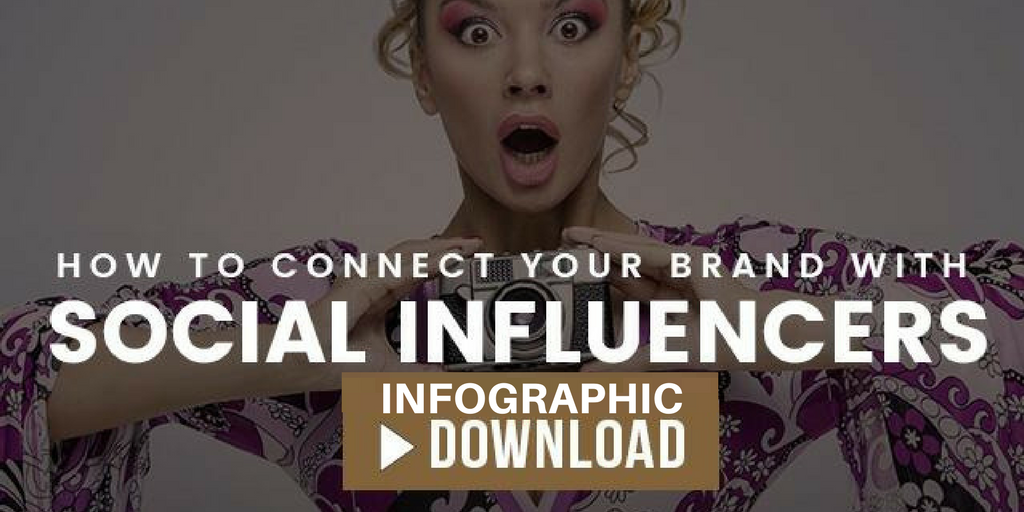