"I make a living telling people what they want to hear."- a lyric from the indie rock artist, St. Vincent, in a song that is now almost ten years old. Interestingly that line is more true than ever as she has slowly shifted deep into the world of brand partnerships over the course of the last year. While the genre of indie rock historically suggests a sense of breaking away from corporatism, St. Vincent is not by a long stretch one of the first musicians to partner with brands.

Her strategic choice of which brands she has chosen to work with are always, for lack of a better term, on brand and indicative of exactly who she is as an artist. In this blog post, Hollywood Branded takes a look at the brand partnerships of alternative indie rock artist St. Vincent. 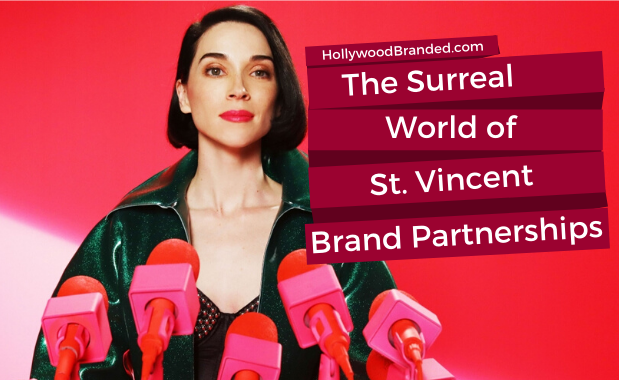 A Strange Little Orange To Peel

St. Vincent (aka the moniker of multi-instrumentalist Annie Clark) first launched onto the independent music scene with her debut album, Marry Me in 2007, which received positive enough reception and features on major press outlets like Pitchfork. Her sophomore effort, Actor fared better, with her lead single, "Actor Out Of Work" finding its way into mainstream alternative radio. By her fourth and self-titled album, the artist won her first Grammy for best alternative album. The following year, the artist was headlining in mainstream Hollywood press outlets for dating the famous model and actress, Cara Delevingne. This relationship and subsequent breakup catapulted her into the mainstream.

Now that the once indie darling and now rock star has established a name for herself, she is ready to capitalize on her branding - and she already has!

As we've written about previously, Pride activations continue to be a growing space for brands to inhabit in a variety of different ways. Microsoft, as ever a force of ingenuity and pushing the needle forward collaborated with St. Vincent to create an immersive musical experience. Often when people think of celebrity partnerships, they think of endorsements and social posts, but they can actually encompass so much more than that. 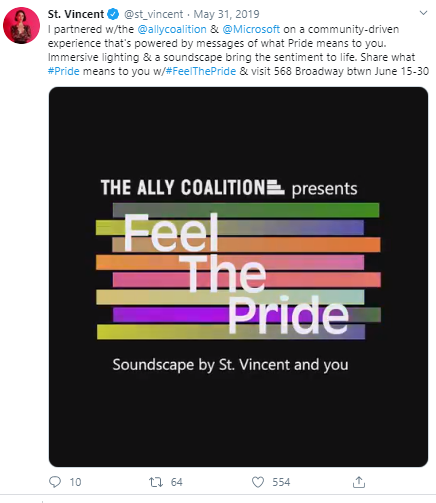 In collaborating with St. Vincent to create a an art installation musical experience, Microsoft is able to shift their branding forward in a brilliant way. If aligning your brand with a cause or figure for Pride is a decision you're considering, it's important to note that you must be careful about who you align with and how you do it. If Microsoft's Pride initiative were simply to sell branded swag or phone cases with rainbows, it would come off as cheap, inauthentic and frankly pandering. The choice to pursue a collaboration with an artist like St. Vincent was smart as it utilized their technology to create a unique experience that would attract younger audiences. When you're competing with a juggernaut like Apple, known for their famous advertising campaign, "Think different" (aligning the brand with iconic artistic figures like John Lennon) it's important to maintain relevance by associating your brand with things that are hip, cool and alternative. Not to mention the fact that St. Vincent's place as a prominent queer person in the arts makes her an ideal brand partner for any Pride campaign.

It's Gonna Be A Champagne Year

When she wrote the song, "Champagne Year" in 2011, fans had no idea that almost ten years later she would literally have one, partnering with the high end champagne brand, Veuve Cliquot. She first announced the partnership across her social platforms with the following post on October 25th. 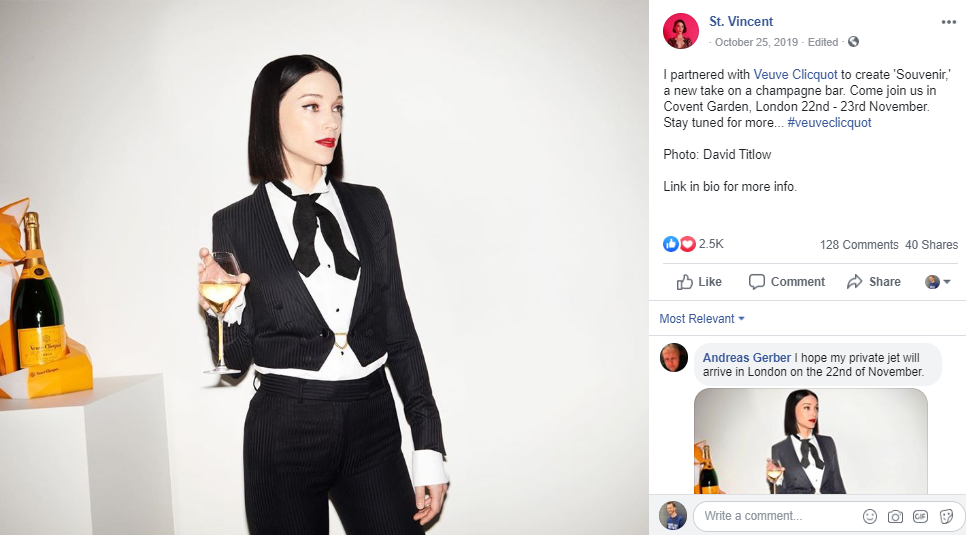 Then almost a month later, she followed up with posting the following video across her social channels on November 20th.

The following day she posted this image of the first night of the Champagne bar party. 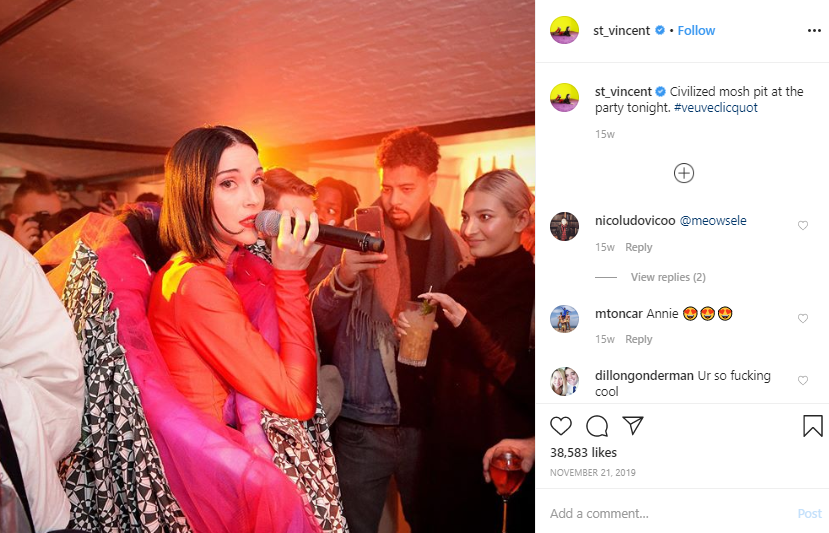 And lastly, five days later she posted this image of her bartending for part of the event. 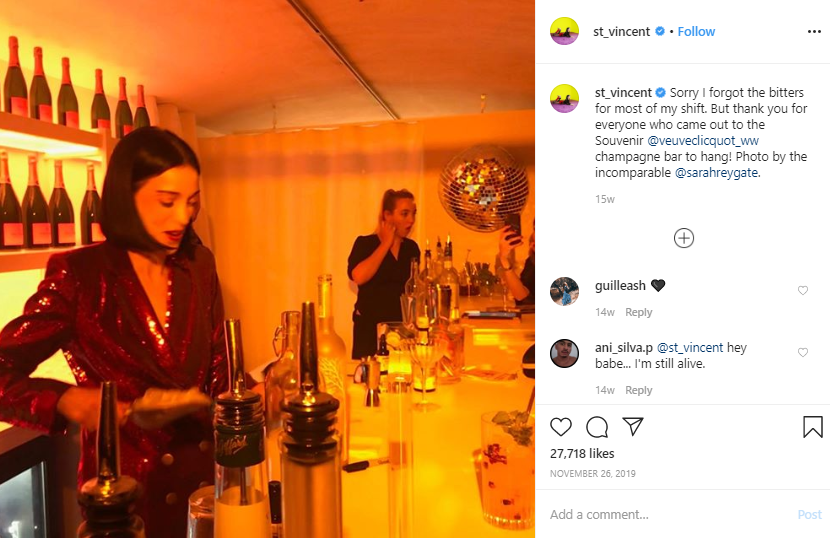 Much like the Pride campaign, this collaboration was built entirely around an experience - not just a product or endorsement. This partnership works differently than the Pride initiative in that it elevates both the artist and the brand. Similarly to Microsoft, this partnership lets you know that this luxury brand is not just a glass of chmapagne - it IS the experience. And one that bohemian artists and unique personalities want to be associated with, as it hosts parties that look exclusive, intimate and wild at the same time. But this partnership also has a bigger impact on St. Vincent's branding than the pride initiative because it's also letting St. Vincent's fans know that she is now a part of something much more extravagant than before. This partnership furthers the narrative that this woman is no longer the girl next door for Texas that plays before. She is now positioning herself as a figure among the elite, a force to be reckoned with and even revered.

Most recently, St. Vincent took her the world and her fan base by total surprise when announced her very own clothing line! This took many followers of her by surprise as she's always joked about not being a very athletically coordinated person. In fact I can remember her joking years ago with the tweet asking "does it count as a sports-related injury if it happened during wii tennis?" But to be fair, she's talked a lot about running every day in several interviews, which definitely requires good athletic gear as well.

The announcement was first teased without anyone even knowing by posting a cute throwback photo of Clark back when she played volleyball as a child. 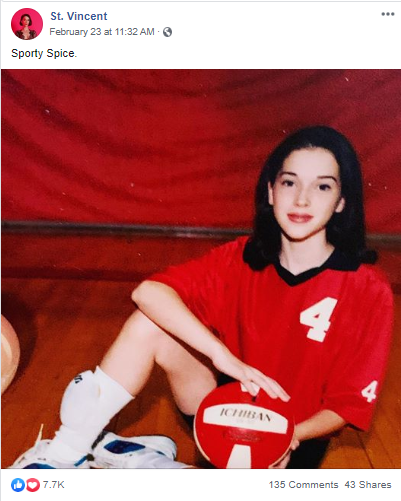 The following day, the image below appeared across her social platforms with a hotline number to call. When you called the number, it looped a bizarre and vague set of instructions about picking out new clothes. At the time, no one really knew exactly what it could mean but it sounded like an old dial-in line from the nineties. 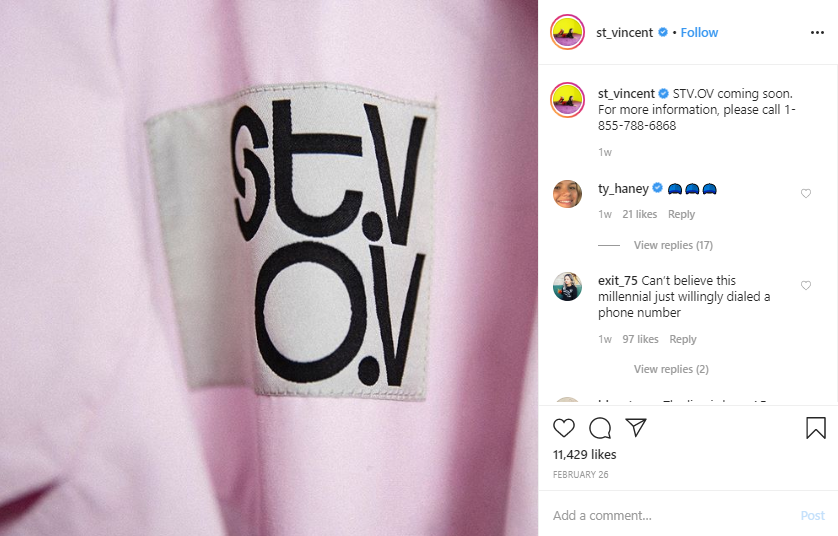 And finally, a day later St. Vincent's social team posted this advertisement that feels like the work of David Lynch to formally announce her new athletic wear line partnered with the brand, Outdoor Voices.

This partnership is in its own a way a match made in Heaven as Annie Clark is originally from Texas and now based in New York, whereas Outdoor Voices was founded in New York with its headquarters based in Austin, Texas. To some fans, the collaboration does seem strange and the comparison to Beyoncé's Ivy Park or Rihanna's Savage X Fenty has been thrown with a little bit of shade, referring to the move as that of a sell-out. But as Annie Clark knows her fans (and their inherent skeptcisim) well, she anticipated the backlash and acknowledged it with the cheeky line, "I hope you guys enjoy it. I think you will.  If you don’t, I’m sure I’ll hear about that, too."

Ultimately what is most successful about St. Vincent as both an artist and an entrepreneur is her belief inn hard work and innovation. Clark has often discussed in interviews that she treats her music career like any other job, working on new songs strictly for at least eight hours a day. In fact, she's often joked that music wasn't the only job she never got fired from. Every time St. Vincent releases something new, there's always an innovative twist to it. When she dropped her single for the song "Surgeon" in 2011, it had to be unlocked by fans tweeting the hashtag #StrangeMercy thousands of times. Fans (the writer included) went wild and the track was unlocked within two days. When she released her following self-titled album in 2014, she debuted the music by performing it at the Spring fashion show for the new Diane Furstenberg line. Clark and her band played on a side stage as models walked up and down the runway to her music, showcasing the new fashion line. Clearly Clark has always had a penchant for the connection between music and fashion.

Just The Same But More Blogs

Partnering your brand with the right celebrity can truly change the game for your social awareness and of course sales. Check out these other posts we've written on securing celebrity endorsements and product placement...