Bring On The Jurassic Partnerships

One of the most anticipated films of the season brings with it some of the coolest brand partnerships to date! Universal’s Jurassic World Dominion was released in June 2022 right off the heels of Paramount’s smash hit Top Gun: Maverick. Battling it out for box office victory, one thing we can guarantee about Jurassic World Dominion is that their promotional brand partnerships are ON POINT.

And as you can imagine, we have some opinions… In this blog, Hollywood Branded walks you through some of the top brand partnerships with Jurassic World Dominion. 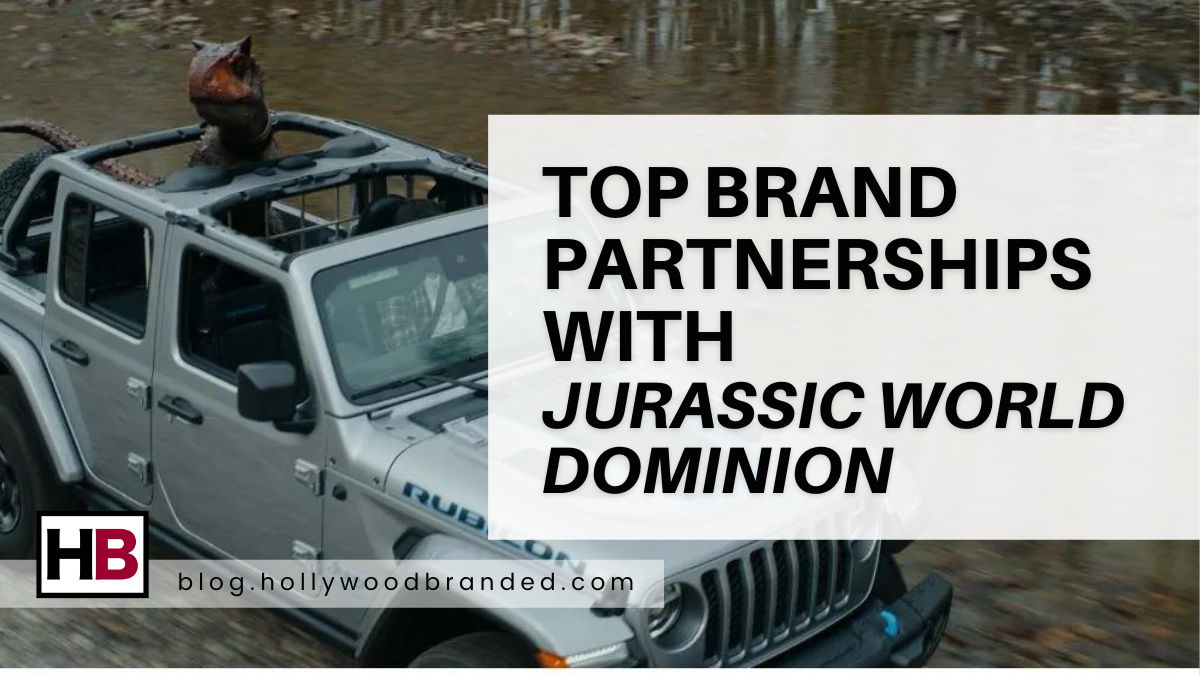 We’ve said it before, and we’ll say it again… What is a major franchise release without a QSR co-promotional partnership? Up to the plate with Jurassic are Carl’s Jr and Hardee’s, both under the CKE Restaurant Holdings Umbrella.

Across all US locations, they created a “Primal Menu” featuring a custom Burrito, Biscuit with Fried Egg served with film-themed BBQ sauce, an Angus Thickburger, as well as a meal exclusive to Carl’s Jr., a Beyond Wraptor Burger for the non-meat eaters.

Bigger than even the menu offerings, though, the restaurant group transformed two Carl’s Jr. and Hardee’s locations in LA and Nashville into a physical shrine to the franchise the week leading up to the film’s release. They called this a “Dino Takeover.”

Image from one of the Carl’s Jr. locations below. 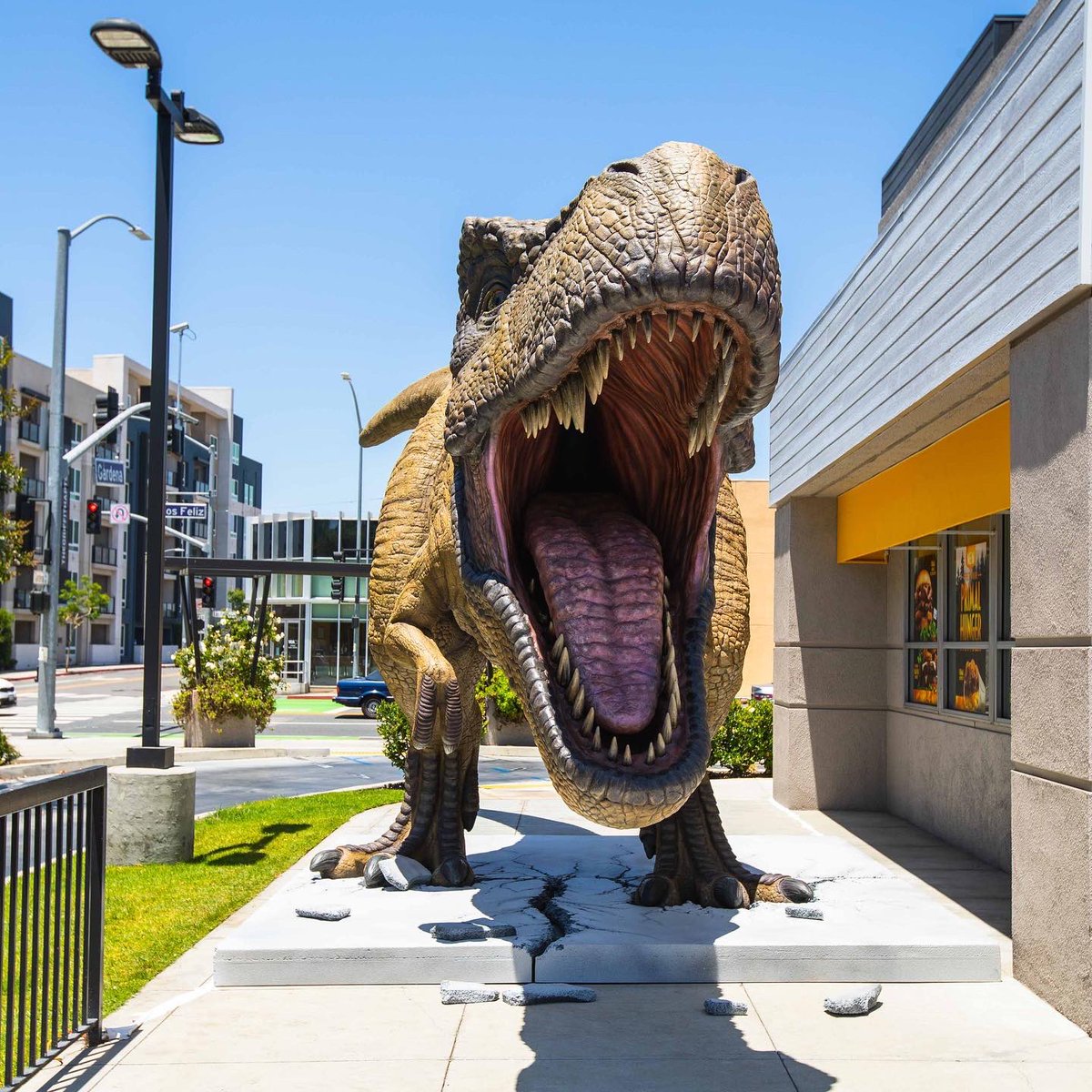 The limited-time menu will be offered only in the U.S, but the promotion campaign will also run in the Middle East and Canada, with those countries having their own unique menu offerings. 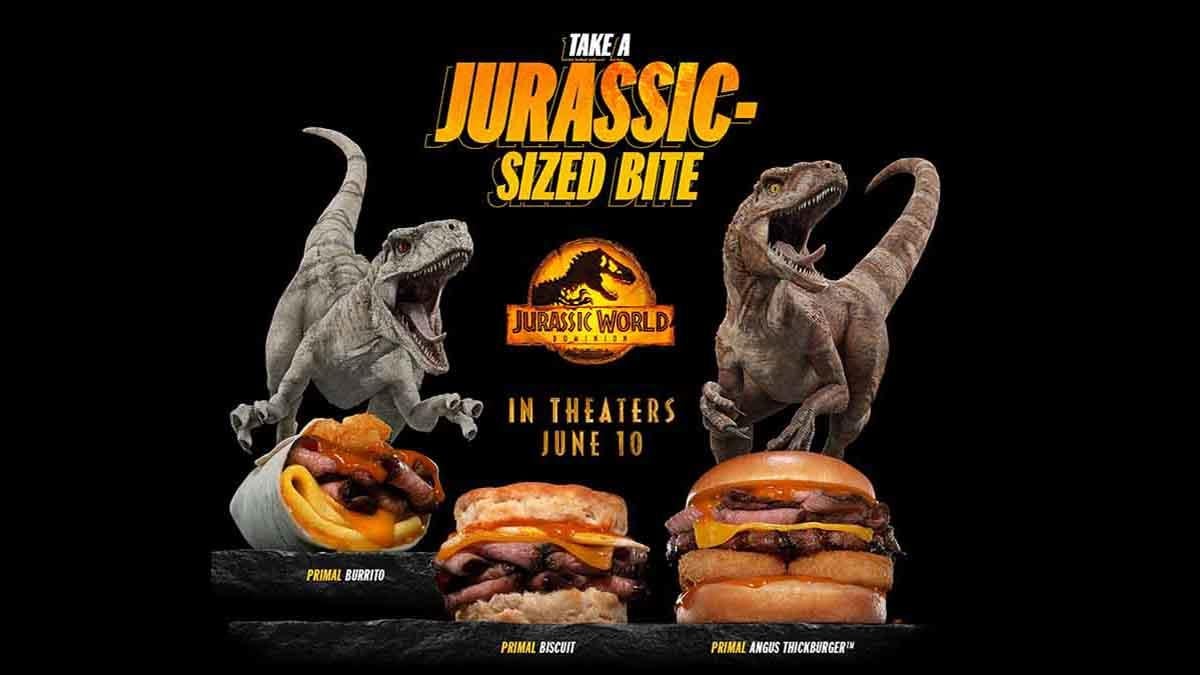 We find this partnership particularly exciting because we’re seeing more and more QSRs partnering with films and talent in ways that stretch the creative boundaries. Gone are the days of just a branded Kids Meal with a themed toy, and here are the days with custom menus and experiential on-location exhibits. We’re excited to see more!!

Can you even run for your life from a T-Rex if you’re not doing it in a Jeep? The answer is no. Everybody knows that Jeep is synonymous with Jurassic Park. It’s like Reese’s and ET, Ray-Ban Wayfarers and Risky Business. In this latest film, we get to see the brand's Gladiator truck, four-door Wrangler, and a vintage Grand Wagoneer. So it’s a delightful surprise to no one that Jeep continued to capitalize on this partnership outside of the big screen.

Committing to the creation of custom ads and a hefty media commitment, to celebrate the latest franchise hit, Jeep created:30 and:60 ads showcasing a Jeep owner chauffeuring a freshly hatched Carnotaurus in his Jeep Wrangler 4xe. In the ad, the driver chooses to keep the dinosaur as a pet, walking it around the neighborhood, trying to acclimate it to the neighbor’s dogs, and of course using the Jeep’s all-electric mode so that his new pet can take a comfortable mid-drive snooze.

The campaign will run in North America, Europe, the Middle East, and the Asia Pacific. Do you happen to be a member of the Jeep Wave loyalty program? Members of the loyalty program are invited to share a sneak preview of the film at drive-in events (in your Jeep, of course) in select cities such as Detroit, Chicago, Miami, Los Angeles, and New York.

Okay, fine. We’ll admit it. THIS one is our favorite. In a world where limited-edition-themed merchandise and fast fashion do detrimental damage to our environment, often affecting the poorest communities and countries, Jurassic World Dominion did its best to not add to the problem. The film partnered with fair trade and sustainable e-commerce platform, Accompany to change this pattern. In a refreshing turn of events, Jurassic and Accompany came together with local artisans in India and Nepal to create a collection of accessories for fans of all ages. Unlike the typical plastics we see in branched merch, this line is filled with products like blankets and towels printed and dyed using traditional methods and natural pigments. It also includes things like hand-crafted wood dishes shaped like dinosaur footprints. 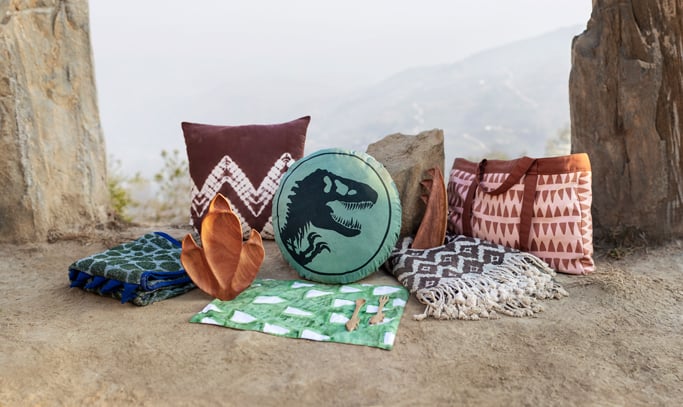 In addition to Accompany’s eCommerce site, the products are available at retail exclusively at Ten Thousand Villages, a retailer that specializes in fair trade products. The store, which has locations across the US, committed to helping in the promotion of this line by running paid social ads across social media and regional radio spots in markets like Los Angeles, Massachusetts, and Pennsylvania.

Of course, a lot more needs to be done to solve this global issue, but a franchise as large as Jurassic World Dominion doing its part is a great step in the right direction.

Roaring Fun And A Roaring Success

Only time will tell how the fantastically reviewed film will do in theatres (though we don’t have many concerns), however, we can confirm that the partnerships did not disappoint. While there are too many to name them all, from our favorites above, we saw a unique and experiential QSR partnership with Carl’s Jr. and Hardee’s. We loved this one because we saw the chain continue to branch out with its creativity, doing a co-promotional partnership that married the delicious with the fun and experiential. Then, how do you do a Jurassic recap without mentioning Jeep? One of the most iconic duos in Hollywood/brand history, this partnership is one that we hope (and don’t think will) won’t go away anytime soon. This one was particularly exciting because it saw the introduction of Jeep’s new electric Wrangler showing that even the dinosaurs are changing with the times. And continuing with the environmental responsibility, shout out one last time to Universal for the great partnership with Accompany. The line of co-branded products is not only environmentally conscience and supported by an equally charitable retailer, but it’s chock-full of legitimately cute items most would be proud to have in their homes.

Brands partnering with major theatrical releases is a tried-and-true practice. We know from the consistent brand participation we see film after film. However, we’re in an era where each major release sees these brands doing a bit more to push their comfort zone, and it’s the reason we continue to get excited about each upcoming premiere!

Not Done Just Yet?

If you liked the article above, we have plenty more to share. Take a read of some other similar blogs that might pique your interest!