When A Pandemic Forces Marketing In A New Direction

Whether your company took one of the worst hits of its life, or you were one of the lucky few to have a thriving industry (at home workout equipment, anyone??), coronavirus turned pretty much every company on its head. Whether it was an irrecoverable hit to sales, an overwhelming spike in your dating app’s traffic, or just the transition from water cooler chats to Zoom calls, we all felt a shift.

As jarring as it has been for some, this global pandemic forced brand marketers to revisit partnerships in a new way. In this blog, Hollywood Branded examines the top brand partnerships we’ve seen come out of COVID-19. 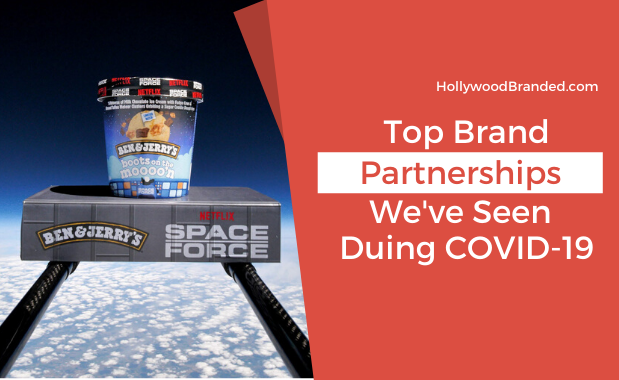 For anyone who has a Netflix account or access to the ice cream aisle at your local grocery store, you noticed a new friendship blooming between Steve Carell’s streaming comedy Space Force and everyone’s go-to ice cream, Ben & Jerry’s. To celebrate the show’s series premiere on May 29th, Ben & Jerry’s unveiled the new flavor, “Boots on the Moooo’n.” The flavor is made up of an out of this world blend of milk chocolate ice cream, fudge cows and toffee meteor clusters orbiting a sugar cookie dough core (see what I did there ;) ). If you know the show, the flavor title is extremely fitting as the characters’ goal in the series is to get “boots on the moon!”

To celebrate this launch, the duo released a promotional video actually launching the ice cream 20 miles into the atmosphere! Check out the video below.

In addition this promo spot, this limited-edition flavor was highlighted by more ad content featuring one of the series’ lead talents Jimmy O. Yang who said, “I'm excited to join forces with Ben & Jerry's on this Space Force flavor launch. How cool is it that we have our own ice cream?! Especially because it's super delicious. Can't wait for everyone to try it and watch Space Force at the same time.”

I think we speak for everyone when we say we’re all just sitting at home in sweats watching Netflix over a pint of ice cream, so kudos to Netflix and Ben & Jerry’s for marrying the two!

No doubt taking a serious hit without the ability to dine-in, Cheesecake Factory is getting creative! The restaurant chain recently partnered with The Tennis Channel for a fun sweepstakes promotion. Called “Meal and a Match Sweepstakes,” the collaboration promotes Cheesecake’s take-out side of the business, motivating customers to enjoy a meal at home. Promoted by spots that ran on The Tennis Channel, the contest was run through The Tennis Channel’s Facebook, where followers were encouraged to enter for a chance to win a $50 gift card. The partnership is simple, sweet, and to the point! 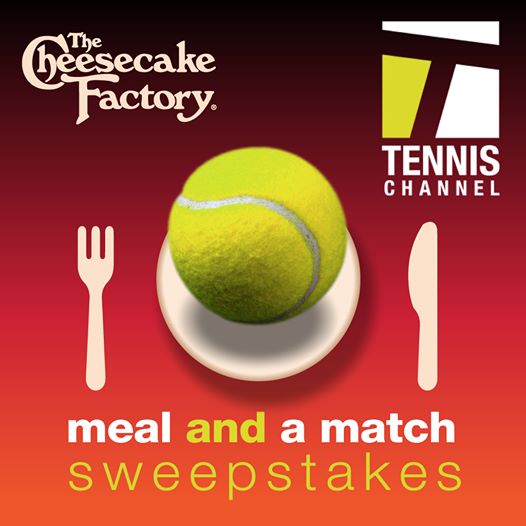 While our industry has flourished on partnering brands with content that is relevant to their demo, in the past couple of years, we’ve seen a new trend begin to emerge. That trend being brands generating their own branded content. Why wait for the perfect show to come to you, when you can work with a production company to craft the perfect show that you can guarantee will deliver on all of your agreed upon messaging points, visuals, and more? While it certainly requires the brand to have some budgets and take a leap of faith on the right production company, the results can really pay off. We saw this recently with THE UN-ADVENTURER’S, a four-part long-form series that Hyundai partnered with video streaming network, Tastemade, to create.

The series, which will launch in June, follows the stories of real people who are leaving their home state for the first time, taking a road trip across state lines. Each episode, we’ll get to learn about the hero character and what about their life kept them from ever leaving. Series host, beloved commentator and Emmy-nominated producer, Selema 'Sal' Masekela, will embark on this road trip with each deserving character in… you guessed it, a Hyundai SUV, like the Santa Fe, Tucson, Kona, and Palisade.

What you’ll notice about this series, which is crucial when brands are generating their own content for a third party network, is that it doesn’t revolve around Hyundai. The storyline lends itself perfectly to car placement, but it isn’t centered around the car. No one wants to watch a four-hour long Hyundai commercial, and this show definitely does not look like that.

In a time when road trips are really the only traveling that people feel comfortable with, this series has absolutely found a great niche.

Check out the trailer below!

American Idol was one of those shows that was rocked when COVID-19 hit. About to embark on their big, theatrical, live portion of the singing competition, the series had to seriously reevaluate if it could continue, and if so, how? Well, surprising many, the producers got to work and did their best to do the show justice in its remaining episodes. Instead of performing on a grand stage in front of a huge crowd in Los Angeles, the contestants instead performed for the three remote judges from their living rooms, using iPhones gifted to them by production.

In order to help make the finale episodes as memorable as possible for both the audience and let’s face it, the poor contestants too, the show partnered with Lowe’s to help them build stages at their homes for their performances. The brand donated more than 500 products including patio furniture, candles, and gardening supplies – each a different vibe customized to the contestant’s personality. The great thing about this partnership is that pre-COVID, there may not have really been such an organic partnership between Lowe’s and American Idol – yet again, a really cool example of innovative marketing in extremely trying times.

Check out a quick recap of the partnership on Lowe’s Instagram.

Making The Best Out Of The Worst

If nothing else, we’re seeing the incredible resiliency from both brands and productions right now. There are very few circumstances where brands, even more so than productions, have the ability to make such fast, off the cuff decisions, and for those that are doing it, it’s paying off. We’ve seen time and time again from previous economic crises that those brands that continue to advertise through them, see the pay off, and we have no doubt that will continue here as well. As the saying goes, “When times are good, you should advertise, when times are bad you MUST advertise.”

There's More Where That Came From!

COVID-19 has brought upon some serious change across all industries, especially marketing. Check out some similar blogs below:

As you saw from the blog above, there are many different ways a brand can partner with content - you can be featured in the content, run a promotional partnership around the release of the content, or just create the content yourself! Our agency has an inordinate amount of experience in it all. If you're interested in learning more about how we work, check out our pricing guide below.