Who Are You Wearing? Celebrity Styles On The Red Carpet

How The Oscars Gave Fashion Brands A Makeover

With awards season in full swing, Hollywood’s most prestigious award show has come and passed, and so too has fashion brand’s largest product placement opportunity. Over the years the infamous inquisition of what designer the stars are wearing has become synonymous with red carpet culture at the Academy Awards.

With Hollywood’s elite dropping every brand amalgamated into their outfit – quite literally – from head to toe, it’s no wonder fashion brands are on the edge of their seats, waiting with bated breath for whether or not their name will slip from an A-lister during a red carpet interview. In this blog, Hollywood Branded will explore the most popular question at an award show, and how celebrity styles on the red carpet can take a fashion house from rags to riches. 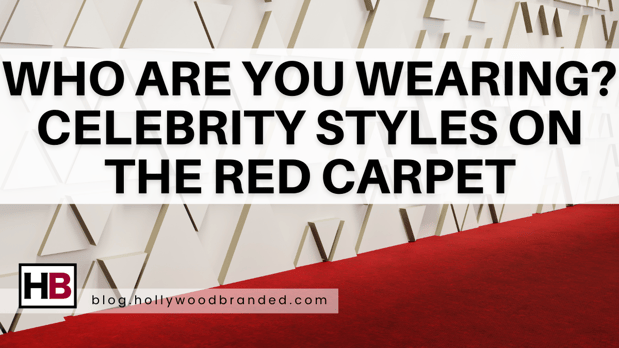 The Phrase That Started It All

"Who are you wearing?" is arguably the most asked question on the Red Carpet, even surpassing the obvious inquiries relating to the nominations, and impending minutes leading up to the big moment. But, have you ever wondered how that question ever came to be? The answer may surprise you.

During the early 1990's Red Carpet fashion was a stark contrast to the glitzy event it has become today, with celebrities holding more control over their personal choice of style for the event. In fact, it wasn't uncommon to see strange and sometimes bizarre outfit choices at the Academy Awards. Carpet culture also conducted itself in a nearly alien way: instead of a 'media frenzy' that we know all too well today, the Red Carpet acted as more of a catwalk for the arriving celebrities, with little media interaction at all! But everything changed when Joan and Melissa Rivers took over in 1995.

Television broadcasters who covered the Academy Awards were very few, and the duo took to the carpet with a single mission: do something new. As stars would make their way down, the few celebrities they managed to snag for a quick interview were thus asked the now infamous question: "Who are you wearing?"

In an article published by Vanity Fair, E!'s S.V.P of production, Gary Snegaroff, explained that “They asked about what [actresses] were wearing because that’s what the magazines would cover after the fact, and turned it into a candid conversation on the carpet where anything could happen.” And years later this trifle of a question has now revolutionized Red Carpet culture, from comparisons of 'who wore it best' to even sparking fashion-oriented coverage of the events like Live At The Red Carpet, and Fashion Police, viewers around the world collectively gained interest in glitzy award shows - but most importantly - the styles of the stars.

Why Celebrities Now Dress The Part

Since gaining traction, more and more viewers tuned into the rated show to hear from the mouth of Hollywood royalty who they had chosen to represent on the carpet. And thus, the battle of the brands began - with popular fashion houses vying for a chance to dress Hollywood's elite on it's most glamorous night.

But the fashion houses aren’t the only ones to turn a profit by the red carpet name drops. In an online article authored by Lauren Sherman she coins a highly note-worthy phrase, “A one-time appearance at a major event like the Oscars can earn an actress somewhere in the mid-six figures, while longer-term deals for A-Listers typically start at seven figures.” Many celebrities then – and undoubtedly their managing teams – have since jumped on the bandwagon in tenfold, signing contracts with the likes of Valentino, Armani, or even Dior just as Marion Cotillard and Jennifer Lawrence have done in recent years.

With the contracts, these celebrities often times will become the ‘face’ of the brand for the duration. Using the example above, Jennifer Lawrence contractually has to wear Dior to a certain number of red carpets a year, and since Dior also employs Natalie Portman, Marion Cotillard, and Charlize Theron, a similar obligation on the celebrity’s part may also be at play – ultimately, further exposing the brand at award shows, collecting more consumer and celebrity interest, and continuing to build off of the cycle.

Broadcasters of course, feed into this cycle as well. E! Live on the Red Carpet has developed revolutionary ways to inspect what the stars are wearing from the 360 Glam Cam, shoe cams, and even in recent years jewelry, make-up, and mani-cam. With these different features, stars are truly under the microscope and no inch missed – which is all the more welcomed by the brand houses they’re wearing and representing.

What About Male Fashion Brands? Does The Above Apply?

This past year The New York Times published an article that discussed the men of Hollywood and their rising interest in red carpet fashion within the past few years. As mentioned in the article, men’s fashion and awareness of new trends and bold statements at award shows (particularly the Academy Awards) has made a prominent impact on male fashion. This year we saw velvet suits with bold patterns, or the classic crisp white tuxedo as the popular looks on the red carpet. And if previous years in consumer sales are any indication of Hollywood’s influence, we can expect to see these styles more and more this year in stores, and at events. So, what does that mean for potential consumers? Even if Viola Davis were to say she’s wearing Dolce & Gabbana at the Academy Awards, do viewers actually buy these expensive products?

In a previous article we published, Hollywood Branded's CEO Stacy Jones broke down some of the numbers, and further explained just how the seamless integration of fashion brands and the red carpet impact the consumer market. For instance, in a survey Hollywood Branded conducted one year ago we found that consumers are more than 43% more likely to purchase clothing products worn by their favorite celebrities.

Really, the outcome comes as no surprise… Popular culture has become so closely integrated into everything that we do and how we conduct ourselves in daily life, whether it be the newest fitness regimen of the stars to Kim Kardashian’s Kimojis, it can almost be deemed a given that if a celebrity promotes (even in passing) a brand name, it’s guaranteed to be a hot item the next day. After all, celebrity influence touches nearly everyone in this day and age, and it’s the fantasy of replicating a lavish lifestyle or paying homage to celebrity idolization that ultimately sells.

And as long as Hollywood's royalty continue wearing off-the-runway fashion at huge events, fashion houses are all the more thrilled to supply them. When it comes to fashion and the red carpet, everyone is a winner.

Ready For Your Red Carpet Moment?

Want to learn all you can about getting your brand involved with red carpet events? Look no further than our very own blog! There, we have tons of blog posts about every aspect of the entertainment industry.

Are you interested in learning how to get photos of celebrities with your product while also obtaining press? Download our celebrity event planning calendar to see what event options exist where you can obtain tangible assets that can be shared with consumers, media outlets, and retail distributors to impact your sales.