The Jet Ski Everyone Is Talking About

In 2014, the biggest brand moment of The Oscars was Samsung's shining moment in Ellen DeGeneres hand when she broke the internet with the largest followed social post ever - at that time.  That same year, Lupita Nyong'o helped sell out overnight Clarins' HydraQuench Moisture Replenishing Lip Balm when she shared what was inside her purse. And then Starline tours in 2017 had a headline role when a tour bus stopped at the show for a brand appearance (which we bet had many sign up for a tour again this year on Oscars night just in case it was repeated.)

And this year? The big winner is Kawasaki's Jet Ski, which took the Oscars by storm in its game showesque front and center and tongue in check prime time product placement that was seen around the world.  Despite that the 90th Academy Awards averaged only 26.5 million viewers, with only 8.2 million adults 18 to 49 tuning in - resulting in the lowest viewership, ever with a 24% drop in audience. In this blog, Hollywood Branded shares a look at 2018 Oscar brand moments, including Kawasaki's Jet Ski, Days Inn's cameo role, and some sugary candy treats. 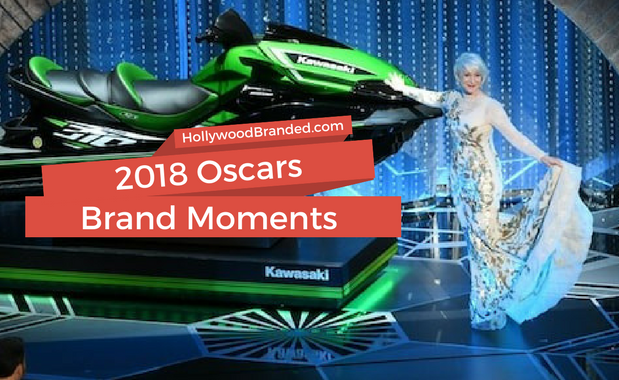 In a moment that seemed to many viewers a massive paid product placement (which we actually doubt - we think it was all likely relationship based), Kawasaki's Jet Ski got more love than any brand historically has in the Oscars telecast.

At the opening, Jimmy Kimmel announces that "Whoever gives the shortest speech tonight... Johnny tell them what they will win!" and Johnny says  "...It's a brand new jet ski!"

And there, front and center, stood Helen Mirren acting like Vanna White, and showcasing the Kawasaki Jet Ski on stage.  With a $17,999 price tag. 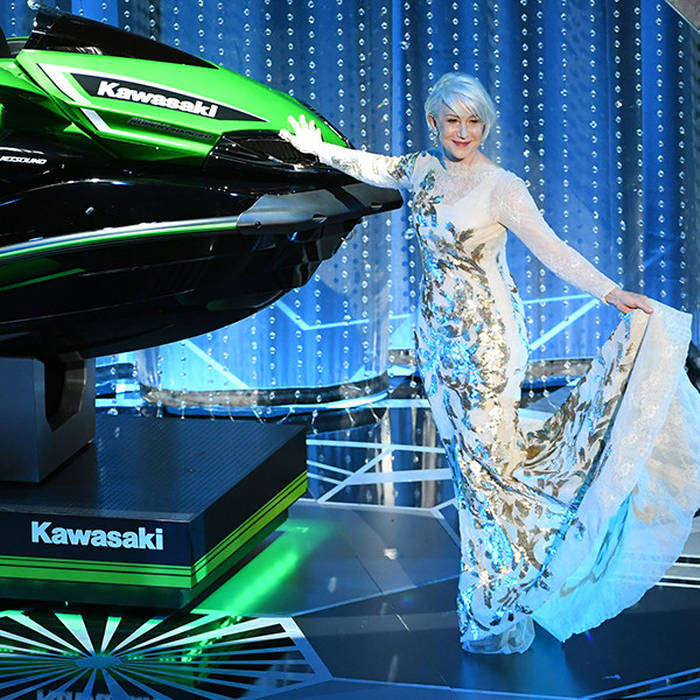 And the winner of that Jet Ski after all the speeches were made? Costume Designer winner Mark Bridges, whose speech was :35 seconds long.  At the end of the show, he was seen riding out on top of the Kawasaki Jet Ski he just won. With Helen Mirren! 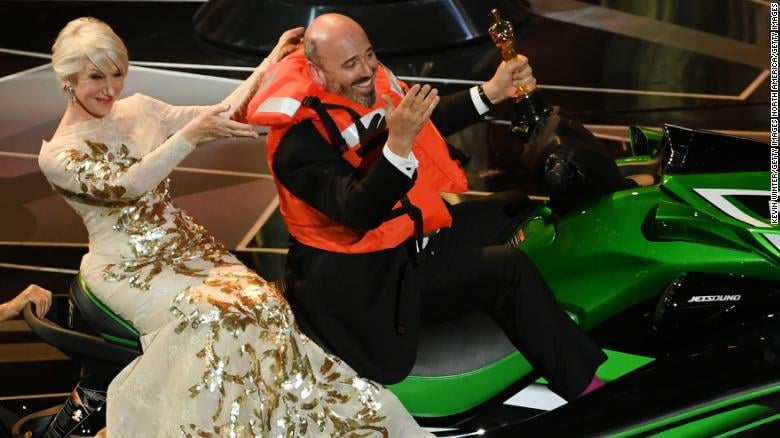 At the begininning of the show, Kimmel went on to say “Why waste precious time thanking your mom when you could be taking her for the ride of her life: on a brand new jet ski!? This is not a joke. I will be timing you. I have a stopwatch.”

During a commercial break, TV screens in the Dolby theater kept the audience up to date on the rules to win the jet ski, which resulted in mentions for the jet ski in several speeches.  It truly doesn't get much better than that.  How jealous must Walmart be as they likely paid well close to $10 million for their advertising and celebrity endorsements, which we wrote about in this blog:  Walmart Partners With Celebrity Directors For New Marketing Campaign.

Why would we think Kawasaki Jet Ski didn't pay?  Did you see any commercials for the brand? No... well, that's why.  If it had been an ABC coordinated paid placement, they would have required TV ad buys to support.

Besides reminding everyone of the rules to win (the shortest speech, including the total of a group speech), the TV screens also let people know that the clock begins when the winners receive microphones, and ends at their last word.

It also let the audience at the Dolby Theater know the retail value of the Kawasaki Jet Ski Ultra 310LX was $17,999 (they announced this on air too)... and that the winner would be responsible for all taxes on it (up to 30% for foreign winners, and the tax bracket of the US winner which likely starts at 35%.).  This is the reason by the way that there is no "official" Oscars gift bag anymore.  The IRS was requiring that all nominees who received the gift bag pay taxes on it - and when the inflated gift bag was worth over $250k potentially... that was a lot of tax for items one might not actually want.

To sweeten the pot so to speak, Jimmy Kimmel announced that they were throwing in a trip to Days Inn to the winner of the Jet Ski - in order to help keep those Oscar speeches even shorter.  The on-the-lake experience certainly makes sense, but the caliber of hotel (Days Inn is definitely more motel in feel) falls very short from a location anyone in the Oscars audience would typically even consider staying at.

And the odd-ball feel of the whole thing screams that it wasn't a paid marketing effort, but more so a joke in the line of satire.  The thing is...it gets stranger still. If Kimmell was planning on poking fun at a motel brand and giving it a moment to shine in the Oscar sun, then why didn't the show use one of the Marriott properties instead, as the are the official hotel partner?  Days Inn is part of Wyndham hotel group.   The hotel partnership sponsorship call out was added at the end of the show, so it does stick out. Wyndham Worldwide consists of the following brands of hotels: Baymont Inn & Suites, Days Inn, Howard Johnson's, Knights Inn, Microtel, Ramada, Super 8, Travelodge, Wyndham, Wyndham Garden Hotels, Hawthorn Suites, and Wingate by Wyndham.

So how did this go down, and is Marriott ok with it?  We wouldn't be if they were our client.  So who forgot that exclusivity clause? Or could Marriott not take a joke, and declined the feature of one of their properties in the skit?  Either could be the reason. Or were they simply not asked? 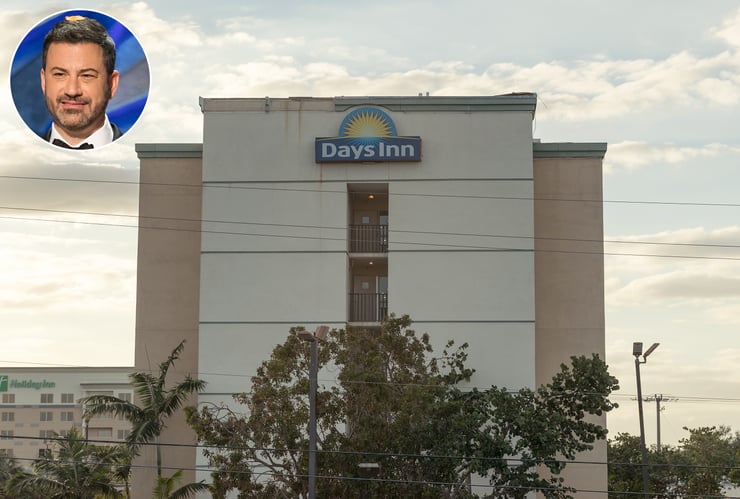 Now the Days Inn brand, which certainly may be growing followers after tonight, did prove that it knows how to leverage social media.  It's immediate response was to offer ALL celebrities who didn't win an Oscar a single night's stay at their Lake Havasu location.  This is the tweet: “We’ll do you one better @jimmykimmel. We think you’re all winners, so any nominees who don’t take home a trophy tonight will get a free night stay at our Lake Havasu hotel or any Days Inn location. Jet ski ride on us. #Oscars.” 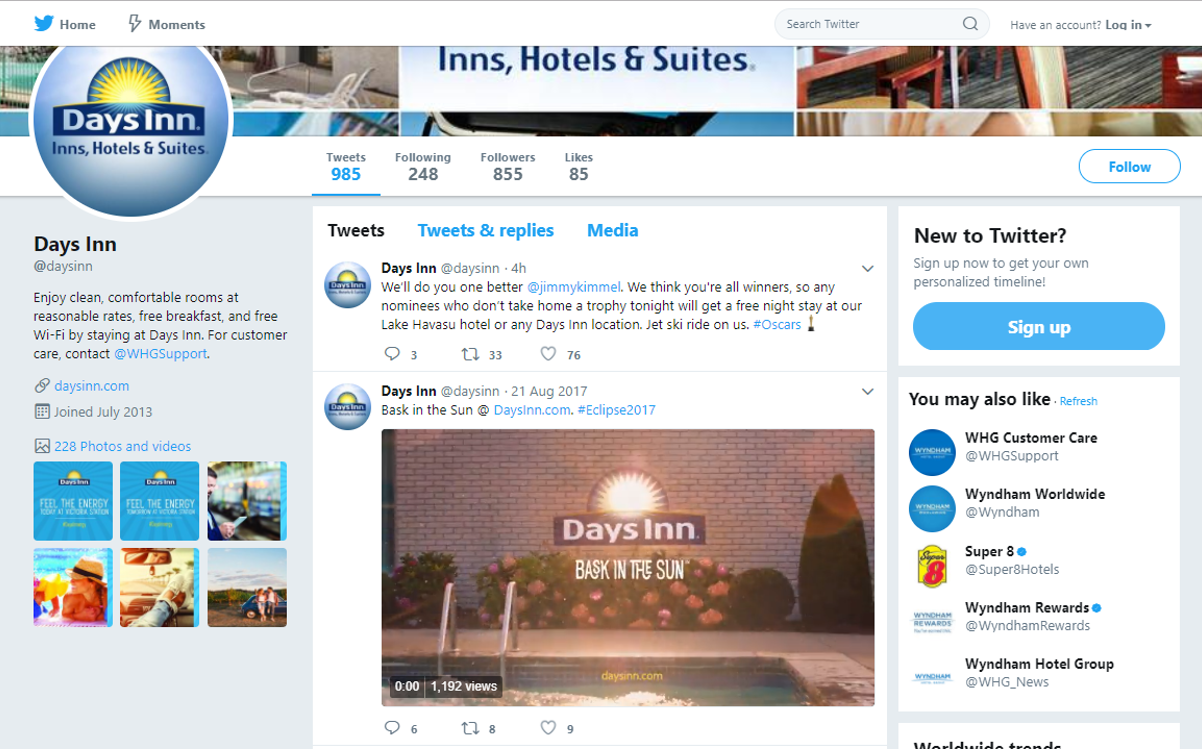 For the third year, Rolex returned to the Oscars to design and host The Greenroom that is the backstage lounge at the Dolby Theater.  The theme for 2018 was a hip Swiss Alps chalet, which also included virtual video windows of the Matterhorn.
In 2017, Rolex created a commercial spot that ran during the Oscars that was comprised of the brand's greatest product placement moments on feature film screens.  Read our blog Rolex's Hollywood Product Placement Video to learn more, and see the ad spot.  Rolex's history with movies goes back decades, and the brand has been part of some of the greatest moments of filmmaking.

The room was set up to look like a contemporary mountain chalet, complete with a library showcasing the brand's cameo roles in movies.

From Rolex: "Rolex supports those who achieve the highest level in their field, be it in sport, or in cinema and the arts. Kathryn Bigelow, James Cameron, Alejandro G. Iñárritu and Martin Scorsese are masters of their craft, whose films stand the test of time. Discover more on http://on.rolex.com/2CSQJBl"

It's not the first time candy has been featured at The Oscars. In the past in fact, candy parachuted down from the rafters in 2017, giving Oscar attendees a little snack break. This year was no different, when Kimmel passed out lunch boxes filled with gummy bears, potato chips, Listerine strips and KIND granola bars during the show.

Inside the box, a note read: “It would not be right to make you sit through this without snacks. Please don’t throw them at me.” The Oscars also made a donation to the L.A. Regional Food Bank for each box. 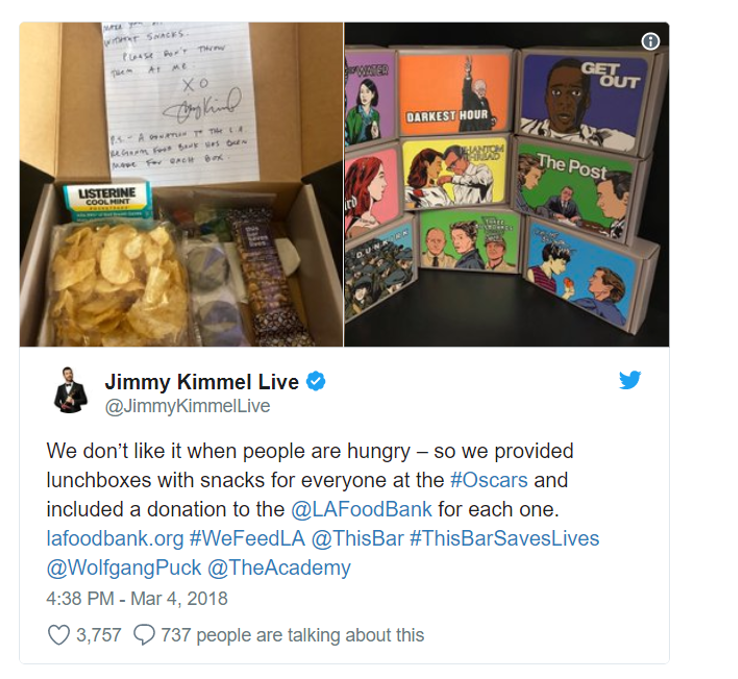 This year, Haribo gummy bears, red vines, junior mints and sour patch kids all got on air screen time, and some verbal mention love by Jimmy Kimmel when they went to the movie theater next door, celebrities with candy in hand, to share the treats with the planted audience. Check it out below: 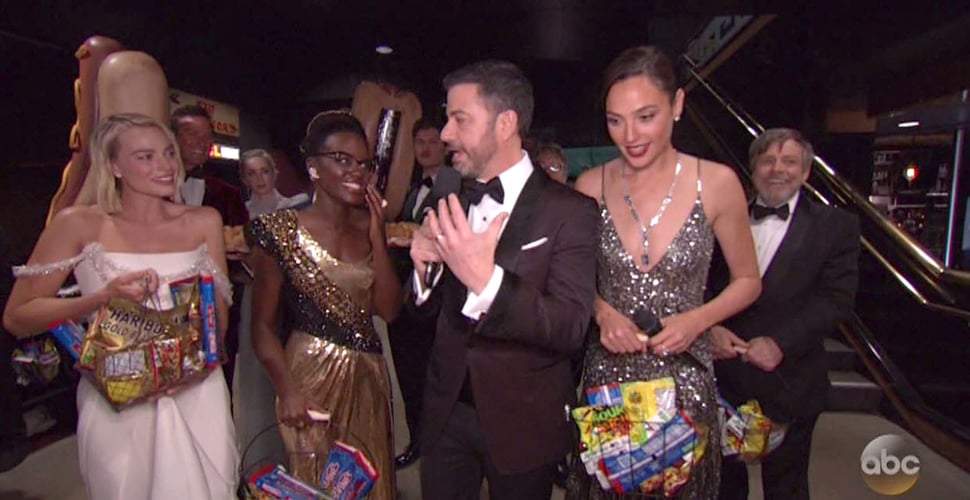 A Wrinkle In Time

Ok, so this wasn't your typical product placement. But come on!!! This plug for A Wrinkle In Time must have had the producers and Disney just screaming in happiness from the front of TV screens everywhere.  Of course, Disney does own ABC, which is where The Oscars is telecast - so they probably had just a little something something to do with the reason THAT movie was used as the backbone to the skit Jimmy Kimmel pulled with its audience next door. 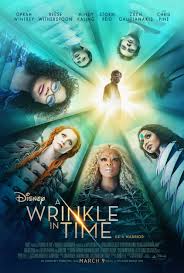 This year, Swarovksi continued it's multi-year partnership with The Academy of Motion Picture Arts and Sciences, and helped the set decorators create a brilliant display for the 90th anniversary.  In fact, it was so brilliant that it required 45 MILLION Swarovski crystals to be embedded in the outer stage edging.

On the show, Jimmy Kimmel said: “For all those who say we’re all a bunch of out-of-touch Hollywood elites, I’ll have you know, each of the 45 million Swarovski crystals on stage tonight represents humility.” 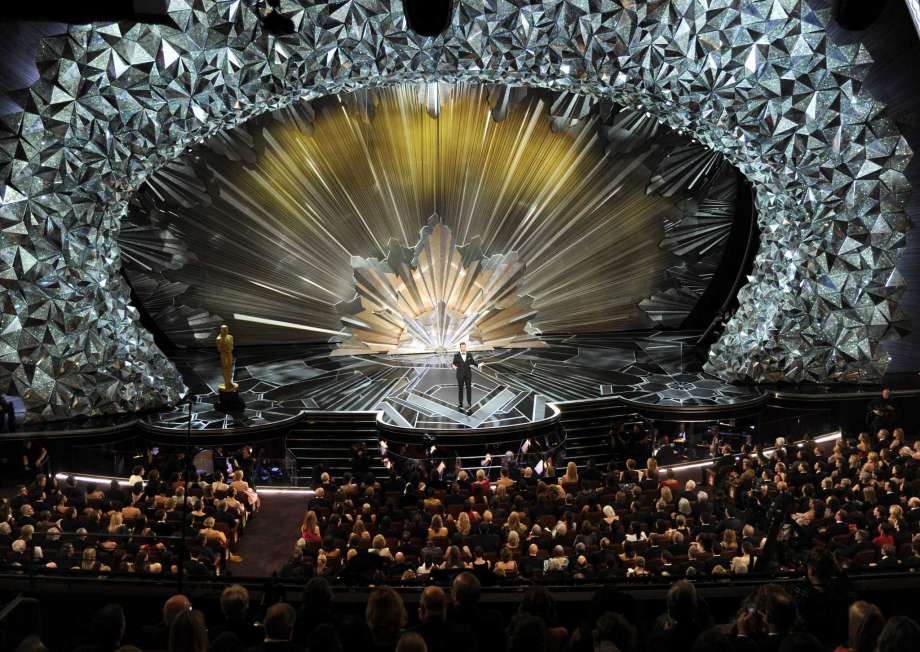 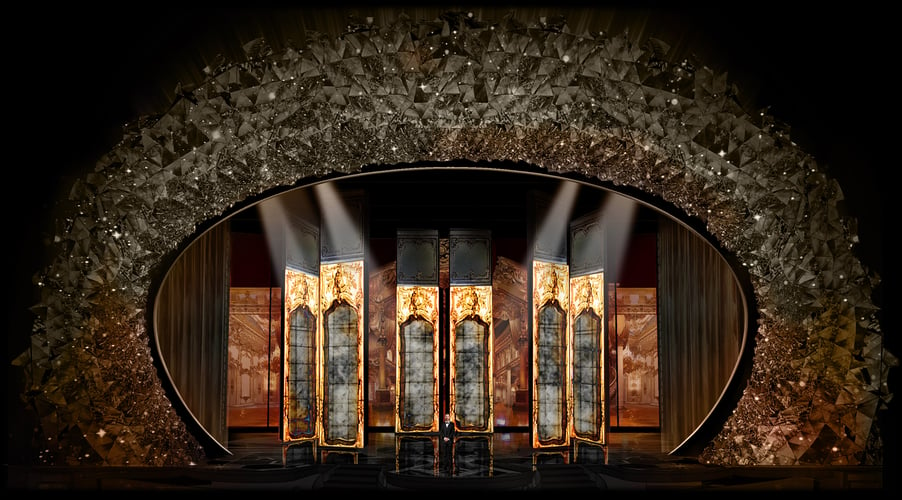 The Oscars have become a brand platform. The only thing is... it's not exactly a platform you can typically buy your way into.  None of these stellar in your face moments (besides Samsung's a few years a go as they are an official sponsor of the show) were likely paid for.

This is what product placement programs are all about - leveraging relationships.  In fact, sometimes in Hollywood wanting exposure, even with 7 figures of cash behind that want, doesn't work nearly as well as just having a presence and ensuring people know about your brand.  Why is this?  Well - you just can't always pay your way into a TV show, especially if you don't have multiple millions of advertising dollars to support that featured role.  This is where I like to say "brand magic" happens.

Check out the blogs our team wrote on the subject:

If you are ready to learn more about product placement... make sure you check out our e-book Product Placement & Promotions Guide, which provides a solid background to everything you need to know.