A Guide For Promoting Canadian Cannabis

The cannabis industry is growing rapidly, so for brands within the space, the opportunities in front of them for growth are mammoth.  While the US has legalized the recreational use of cannabis on a state-by-state basis, all of Canada became legal in 2018.  And that has led to some major legal regulations, which limit how brands can be promoted.

In order to comply with regulations, and how they are enforced, it is essential to understand which laws apply to cannabis marketing, and how brands can promote - and protect themselves, from overstepping boundaries. In this blog, Hollywood Branded provides an overview on how brands are legally and tactically promoting cannabis products in Canada, enabling these brands to stand out while following enforced regulations. 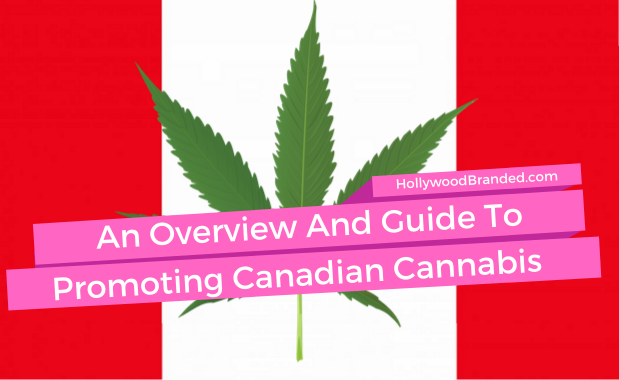 A Blunt Overview Of The Cannabis Act

On October 17, 2018, Canada legalized dried cannabis for people ages 18 and over. Despite its legalization, there are many rules and regulations limiting the promotion of cannabis. Understanding the laws that surround the product is a necessity for marketers, as failure to comply can result in a fine as large as five-million Canadian dollars, or up to three years of jail time.

Now that I've got your attention, let's jump into some 4 specific limitations cannabis brands need to adhere to:

You're probably racking your brain trying to think about how it's even possible to promote cannabis with all of these regulations, but fear not, there are still strategies that brands can utilize to get their product out there.

Strategies To Smoke Out The Competition

Although limited, there are still ways that companies are able to promote their brand and products. One key portion of the Cannabis Act enables brands to create "brand-preference promotion", where companies promote their brand itself rather than promoting a specific cannabis product. That means paid sponsorship opportunities using the brand name are allowed through third party events - including film festivals, movie premieres, charities, and other events that can garner major media attention.

Brands can use these types of promotions to advertise the name of their company, as well as their websites, where they are free to display larger amounts of information that's not permitted in other advertising.

Cannabis websites are absolutely age restricted, but social media does not require any date of birth confirmation when visiting profiles.  Beacon Medical, a medical cannabis-based company got creative by adding an age-gated filter on their Instagram profile, requiring visitors to be already logged in to their own Instagram account, which hosts their age information (if input by the user).

As for promotion, Snapchat is currently the only large social media network  that allows cannabis products to pay to advertise on their platform. That means organic posts are allowed, paid posts or boosted posts are not.

Another work around for brands is focused on medical messaging, which means TV shows including news segments and talk shows can legitimately talk about a cannabis brand (by name) or have a spokesperson from the company on to discuss the industry.  That also includes podcasts, where organic conversations can be built in.

Building opportunities to focus on the industry as a whole, headlined by the brand or brand's spokesperson, are one solid option as a work around in creative advertising.

There are currently tight restrictions on promoting cannabis products, but as time goes on there likely will be much more leeway, similar to how alcohol advertisements took time to grow after Prohibition. Despite the laws that are currently in place, there are some risk-taking companies that are pushing the boundaries of advertisements.

Let's take a look at some brands who have figured out how to market around those challenges legislation has created.

UP Cannabis is a company that dodges the advertising restrictions by making a symbolic ad campaign. Their advertising campaign uses banking themed imagery and terminology as an insinuation for smoking weed. The poster reads "Our interest rates are so high", and "Retire this afternoon". This advertisement features a piggy bank strung to a balloon along with a link to their website. 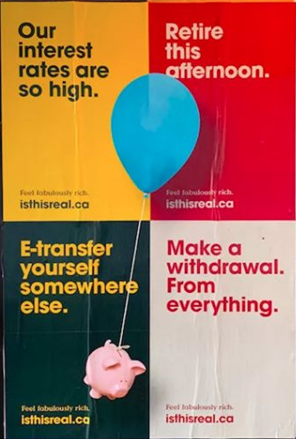 UP is accomplishing a lot through its subtleties, such as how it's clearly not aimed at a younger audiences due to its relevance to banking. It also makes nods to people's associations with smoking cannabis through the use of banking terms, rather than directly targeting emotions (which would be prohibited). UP's use of a piggy bank is a creative way to implement a memorable symbol that stands out, while staying in accordance with the restrictions on using people or animals in cannabis advertisements.

UP's ad is seen by some in the industry as controversial, and lawyers who have weighed in are unsure whether or not Canada will ultimately deem it unlawful.

Tweed is a cannabis company that takes brand-preference promotion to the next level. A large part of Tweed's marketing strategy is to make obvious references to weed without directly mentioning it. Even their logo design creates a border around the word "weed".

When cannabis was only legal for medical purposes in Canada, Tweed had ran a successful "Hi." campaign. The campaign was centered around engaging customers by simply greeting them and directing them to Tweed's website. Tweed's previous website landing page did not ask users for their age, because Tweed provided the visitors with information and strong hints as to what their product is, without explicitly stating it. At the end of the website, visitors have the option to click on a link to learn more, which is where they will enter the actual online store. This was another way that Tweed was able to use their not-so-subtle hints to avoid regulations.

FIGR is a brand that advertises its cannabis products "by the numbers". Each of their products are titled after a number that is significant to the product. FIGR 5, for example, is represented by the number 5 because it is grown by farmers with 5 generations of experience. Meanwhile FIGR 10 is named after the 10-step process that FIGR uses to ensure their product's quality. FIGR has advertised on Snapchat, where they present an appealing graphic of the number for their product paired with a call to action for viewers to swipe up to learn more. This campaign's slogan reads "there's more behind our number," which ignites the curiosity needed for consumers to learn more.

One are which has not been absolutely defined is influencer marketing, where individuals are paid to post about a brand and generate content that will appeal to their specific audiences.  We happen to love influencer marketing in that you can very specifically target influencers who impact niche audiences, and get a lot of video and still image content generated that can later be repurposed by your brand on your own digital and social platforms.

For many brands, this has become an absolutely standard marketing practice, that has its own legal requirements, which include full disclosure by including an #ad or #sponsored hashtag call out within the post.  Companies that get in hot water are those that operate outside the laws, specifically not using those hashtags to disclose the partnership.  Other companies that have recently gotten in trouble are those who are similarly limited in advertising - electronic cigarettes like Juul, who is under scrutiny in the US for possibly using influencer marketing to advertise to minors.

While celebrity endorsements are specifically forbidden, the area of influencer marketing appears to be in a grey area - especially if those influencers are not focused on a specific product, but only the brand name.  A legally approved marketing practice for all other advertising platforms.

If approached from a pure branding focal point, this type of marketing appears to align with Canada's advertising regulations.  Especially if the posts and images don't showcase or mention cannabis, as the specific goal of this type of campaign is to build brand name awareness.

Wired Messenger wrote a comprehensive article deep diving into legalities that we suggest reading as well, and shared more insight on an influencer campaign from Cove Crafted, depicted below.

One option cannabis brands have is to utilize event sponsorships to advertise their brand. Again, not their specific product, but their brand name.  Trek Brands sponsored an 'unofficial' event leading up to the 2019 Toronto Film Festival featuring two of their brands, TREC Brands’ two cannabis brands—WINK and Blissed, which definitely got media's attention.  What made it unique is the event centered upon ensuring the 300+ attendees became well versed in cannabis education.  And in fact, one of the activities sponsored was a joint rolling station, where those who attended could also partake, as the event was at a private residence and smoking was legally allowed.

This is something that is becoming incredibly popular in Hollywood at events as well - having activity stations where flower is provided and guests can make their own gift bags, or sample product.  It allows cannabis brands a very hands on experiential approach to directly connect with trendsetters and potential consumer clients. There are major opportunities at TIFF and other film festivals for brand name sponsorship.  For many years, our agency curated a selection of independent and studio distributed feature films, where we would have BlackBerry sponsor dinner parties - inviting the cast and crew for the celebration, having film and brand logos on step and repeats and signage throughout the venue, and inviting the media to cover the events.  The filmmakers were delighted as they had a free event after their TIFF screening, with a media machine built out ensuring massive global awareness. BlackBerry was delighted as they were able to co-brand with major movie stars, and align themselves with film properties that garnered massive media attention.  This is a really fun activation to do, and one we had tremendous success with year after year.  You can see inside one of the events we hosted with Lionsgate's Buried, starring Ryan Reynolds.  Now - we leveled that one up because if you saw the movie, you know it was about a guy trapped in a coffin, with only a zippo and a BlackBerry - and a limited time to be saved before the battery ran out.  Pretty dramatic product placement for both brands.  Check out the party and pre-interview we arranged here! Wrapping It All Up

Despite all of the regulations set for cannabis in Canada, companies such as those mentioned are still able to find success. Creating a campaign that leaves a mark on consumers while also following the rules is necessary, and possible through creative marketing strategies.

Curious to read more about cannabis? Great! We have many more blogs about the cannabis industry and its place in entertainment and marketing.

As mentioned in this blog, there are many benefits to understanding how to promote brands strategically. Whether your goal is to reach the right market, create a memorable campaign, or stay within the boundaries of Canadian cannabis laws, having the marketing resources is a necessity.

To note - here is our disclaimer.  Laws change, faster than we may update this blog.  We are not a legal firm, and any brands need to do due diligence to ensure they are operating within the black and white boundaries of legal requirements in Canada, or any other country.

In the guide below, Hollywood Branded educates readers on product placement as well as cross-promotional strategies. You can learn more about how these promotional opportunities are beneficial due to their low cost and global exposure. Be sure to check it out!