When a brand chooses a current athlete as their celebrity endorser, great care must be taken to make sure the strategy does not alienate fans of opposing teams. Sports rivalries and loyalties are strong, especially when it comes to NFL fans.

Campbell’s Chunky Soup’s “Mama’s Boy” campaign breaks through the barriers of team allegiance by calling upon a greater commonality of fans and consumers – family. In this blog, Hollywood Branded looks at how Campbell’s Chunky Soup’s “Mama’s Boy” campaign has leveraged NFL stars as spokespeople in promoting their brand nationally without alienating fans of rival teams.

Sports Stars Can Sell A Lot Of Cars …And Soup!

Leveraging the popularity of local sports stars is a very common marketing practice by neighborhood businesses. Frequently these athletes can be seen in commercials helping to sell cars at dealerships, appliances at stores, or in any variety of other area advertising campaigns.

Businesses draw on the popularity of these hometown heroes to increase their own popularity and sell more of their products. There is such a fan loyalty that is built around professional sports teams and their stars that consumers are naturally drawn in. Many sports fans identify so strongly with their teams that there is a tendency to think: “if this truck is the truck that my favorite player drives, then is must be good enough for me."

Despite the threat of sports rivalries potentially derailing celebrity endorsement campaigns, ever since this campaign first appeared in 1997, football fans have been willing to look past their team loyalty and embrace the NFL spokespeople who have embodied the family bond that is common with all fans.

In the most recent iteration of the campaign, the young star quarter back for the Dallas Cowboys, Dak Prescott, is the perfect choice of spokesperson for Chunky Soup’s latest reboot of the “Mama’s Boy” campaign. Prescott a popular figure in Dallas both on and off the field since he took over the starting Cowboys quarterback position in 2016. And it doesn’t hurt that the Dallas Cowboys, dubbed “America’s Team,”, are the most valuable sports franchise in the world – worth over $5 billon, according to Forbes magazine.

If fan loyalty is successful in generating localized sales, how does a brand – such as Campbell’s Chunky Soup – avoid having the opposite impact of alienating the fans of rival teams when choosing an athlete spokesperson?

You Can’t Hate An Athlete Who Loves His Mother

Campbell’s Chunky Soup’s “Mama’s Boy” campaign has been so successful at choosing its NFL athletes as their spokespeople and designing positive campaigns around them that NFL fans are able to look past the jersey logos and their own loyalties, embracing the larger message. Campbell’s has also been a sponsor of the NFL since this advertising strategy first began, so the NFL is also front and center with each of these campaigns. Rams fans, Patriots fans, Steelers fans, and Cowboy fans are all first and foremost NFL fans!

The other appeal of these “Mama’s Boy” spokespeople, beyond their NFL Football stardom, is the likeability that stems from their appeal to family values. Prior to Prescott appearance in this campaign, the spokespersons’ mother (played by an actress or the player’s actual mother) have been portrayed in the commercials as the loving parent who wants to make sure their grown-up child was still taking care of himself. The “Mama’s Boy” spokesmen, in turn, have demonstrated a fond appreciation for care exhibited by their mothers who continue hold a major place of importance regardless of their own current NFL superstar status. No player has a bigger fan than their own mother and these special players in return are just as big fans of their mothers.

This is the second time that Campbells has brought back this campaign, which originally ran from 1997 until 2008. All-star Wide Receiver, Victor Cruz, became the first “Mama’s Boy” spokesperson of the first revival in 2012 after his New York Giants won the Super Bowl. Mark Materacky, senior brand manager for Campbell’s Chunky Soup at the time, summed up the effectiveness of their message and strategy in the September 9, 2012 article in Progressive Grocer: “When guys watch an NFL player like Victor Cruz they may admire his athletic abilities or his accomplishments, like winning a Super Bowl ring, but they typically don’t think about the influential people who helped him get to that point -- like his mom,” further noting, “The Mama’s Boy campaign taps into the important relationship guys share with their moms and helps make a star athlete like Cruz more relatable to men who love football as well as the amazing women in their lives.” Essentially, the player’s mother is their own brand spokesperson, making each of them valued and trusted representatives for the Campbell’s Chunky Soup brand.

Talent Runs In The Family

The Campbell’s Chunky Soup “Mama’s Boy” campaign returned for a third time (first since 2014) at the beginning of the 2019 Season with Dak Prescott taking on the spokesperson role. The commercial that welcomed Prescott as the new Mama’s Boy is actually void of a mother due to the passing of Dak’s own mother in 2013. Instead, Dak’s two brothers join him to continue Chunky Soup’s celebration of the importance of family. Embracing another element that helps the “Mama’s Boy” spokespeople transcend beyond rival fan loyalties – humor – Dak’s brothers appear in this spot as having crashed a post-game press conference. One brother asks, “Dak, that touchdown – how do you do it?” The other brother chimes in before Prescott has a chance to respond, “People say talent runs in the family.” Prescott responds with feigned frustration, “really?” showing an expression that anyone who has a brother would know – even as an adult (and an NFL star at that) nothing has changed. He then looks around befuddled and asks, “who let my brothers in?” His brothers take this as their cue to flank Dak for the rest of the press conference. 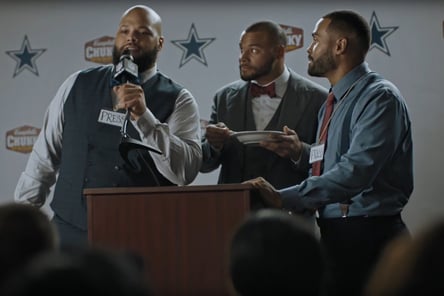 Campbell’s Gets Every Drop From Their Mama’s Boys

Choosing a current athlete as a spokesperson for a brand can be a risky move if not handled strategically. Fan loyalties can run deeply and could possibly deter potential buyers if they are unable to separate their negative feelings about an opposing team and one of its players from their viewpoint about a brand who has chosen an opposing player as their spokesperson. The Campbell’s Chunky Soup “Mama’s Boy” campaign continues to get the formula right and maximizes the selling power of their NFL star spokespeople every time.

Check out our video below to see how celebrity endorsement deals drive sales!