How Brands Use Celebrities For Philanthropy

Partnering with non-profits, philanthropic endeavors and charitable causes is not only a great PR initiative, it's also a great way for celebrities to use their name to give attention and recognition to issues they feel passionate about.

Matthew McConaughey is known for unforgettable performances in comedies, dramas, action films and even rom-coms. But he's also an accomplished philanthropist with a passion for giving back to the community and this holiday season, he wants to help ensure everyone has access to a turkey dinner. In this blog post, Hollywood Branded examines the celebrity partnership between Matthew McConaughey, Wild Turkey and Operation BBQ. 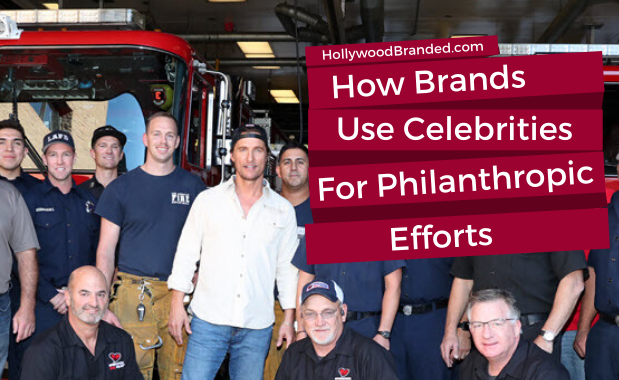 Partnerships For The Birds (And The Responders)

It's pretty common for actors, entertainers and musicians to get involved in such partnerships during down time between productions and touring. While stars like Beyoncé are better known for their humanitarian efforts, many readers would be surprised to learn that Matthew McConaughey is also quite the philanthropist!

In fact, McConaughey has been involved in a large number of charity organizations over the years. His philanthropic endeavors include work with charities benefiting causes like cancer research, the Los Angeles Children’s Hospital, AIDS & HIV awareness, education, addiction treatment, combatting domestic abuse, disadvantaged youth and animals. In fact the list goes on as McConaughey has consistently aligned his platform with causes near and dear to his heart.

McConaughey has actually been the Creative Director for Wild Turkey for three years now, since 2016. After McConaughey's inaugural visit to the famous Kentucky distillery, where he was introduced to the Russells and the relationship was formed. Seeing the process and the brand's commitment to quality, the actor decided he wanted to become involved with the brand and his role was formed with the brand. Last year in 2018, McConaughey unveiled his own line of Bourbon: Wild Turkey Longbranch, which the brand describes as 'a rare small-batch Kentucky straight bourbon refined with Texas Mesquite.'

Bring On The BBQ

Throughout November and December, Wild Turkey has been and will continue to support Operation BBQ Relief (OBR), a nonprofit that responds to natural disasters and other situations to help feed displaced residents and emergency personnel. The program started last month in Los Angeles where McConaughey, Eddie Russell and a group of volunteers prepared and delivered turkey dinners to first responders who are critical in the rescue and relief efforts around the wildfires in the area. After the relief effort in LA, Wild Turkey worked with OBR to feed first responders in Dallas, New Orleans and Chicago with turkey dinners. As a sponsor of Operation Barbecue Relief, Wild Turkey will also be donating $50,000 to further the organization’s important work.

“Teaming up with Operation BBQ Relief as part of the Wild Turkey “With Thanks” has never been more meaningful,” said Wild Turkey Creative Director Matthew McConaughey. “Little did we know when planning this annual event that California, my second home, would once again be hit with devastating fires. Being able to provide meals to the men and women who put themselves on the line is an honor for me, Jimmy and Eddie Russell. We are grateful to be here today to say thank you, shine a light on their unwavering conviction, and hopefully inspire others to get involved and help in their own communities.” 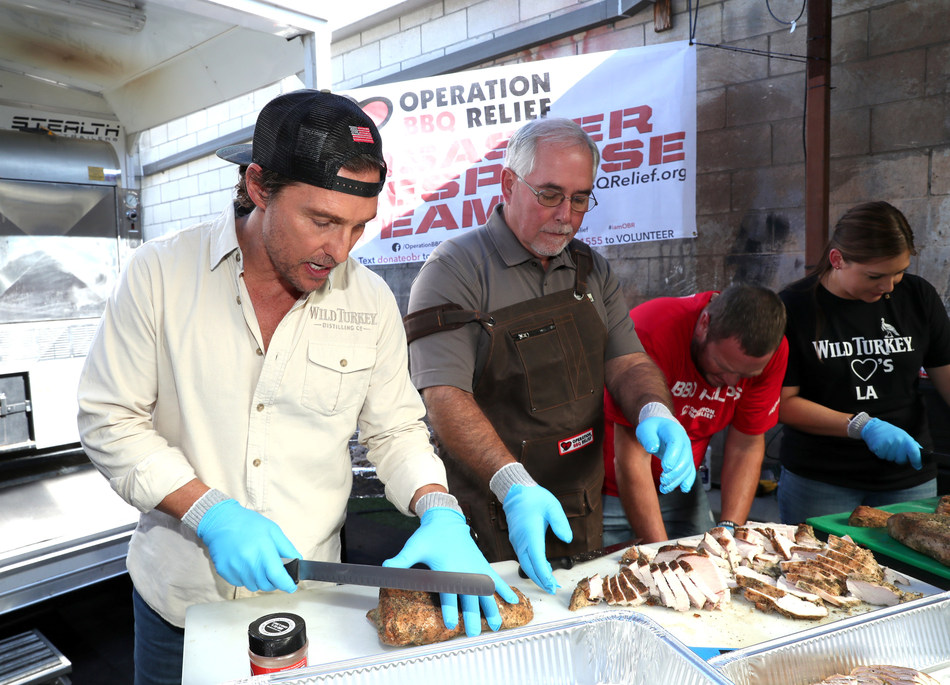 “We are so fortunate to be working with Wild Turkey for the “With Thanks” campaign to shine a spotlight on First Responders across the country. Part of our mission throughout the year is to support these men and women as they are responding to severe situations in their communities,” said Stan Hays, CEO and Co-Founder of Operation BBQ Relief. “BBQ is comfort food and reminds people of good times. These hot meals we are preparing uplift the spirits of the first responders for their hard work each and every day.”

“Wild Turkey is founded on community – from our tight-knit group of distillery employees to the townspeople who have supported us through the years,” said Wild Turkey Master Distiller Eddie Russell. “To honor that spirit, every year we recognize people who perform extraordinary acts to support their communities – and do it with conviction. We are grateful to have our Creative Director Matthew McConaughey to help us take action and give thanks again this holiday season.”

McConaughey was also behind the grill last year as Wild Turkey recognized first responders from Hurricane Harvey in Houston, surprising them with a turkey dinner. In 2017, McConaughey visited Wild Turkey’s hometown of Lawrenceburg, KY, and delivered more than 4,500 turkeys to residents, including 500 turkeys to the local food bank. McConaughey personally thanked every food bank employee for their work toward the cause.

Celebrities, Brands & The Values That Unite Them!

A successful partnership like this is truly ideal for all parties involved – it creates positive PR and public perception for McConaughey and Wild Turkey and it simultaneously shines a light on the important work of causes like Operation BBQ. In fact aligning celebrities with brands and organizations is no easy feat, which is precisely why agencies like ours specialize in the such endeavors. Finding a brand with values similar to that of the celebrity is only a small piece of the puzzle. Sometimes the real work is in drafting up contractual terms that all parties are comfortable with and delivering them.

Partnering celebrities with worthwhile causes and organizations because it gives members of Hollywood an opportunity to use their platform to help all parties involve thrive and do better for the community. If your brand is looking to increase your sales or awareness, the benefits of a celebrity endorsement are absolutely worth the investment. Identify and partner with the celebrity that will best suit what your brand’s needs and represents. Together you can create content with the celebrity to promote a purposeful message to your audience.

Want to learn more about the power of an effective celebrity endorsement? If your brand is having trouble finding the perfect influencer or celebrity, we’ve written many other posts about the power of partnering your brand with the right celebrity. Check out these other Hollywood Branded blog posts for more information!

Interested in launching a celebrity endorsement or getting a celebrity to attend your next event? Check out our e-book to learn how to get celebrities to your brand's event!