How M&Ms Won With Live TV Ads During The Oscars


Creating A Full Campaign That Stood Out

The Oscar's are one of the biggest nights in television, and fall only second to the Super Bowl in many advertiser's eyes. While cheaper by $3 million than a Super Bowl ad, the "Super Bowl For Women" Oscars advertising packs a mighty punch as each thirty second ad sells for up to $2.6 million, this year's audience of 23.9 million viewers (the lowest reach in the last two decades - which at one point got as high as 43.7 million.)

The types of brands who advertise within the star studded show widely range from targeting moms (hiya Walmart) to trying to capture the celebrity laden alignment of luxury (hello Rolex). This year one brand did something a little extra creative and strategic to stand out, creating a campaign that ran throughout the entire show.  In this blog, Hollywood Branded looks at how the Oscars created live TV ads with M&Ms and Roseanne, creating engaging advertising campaigns. 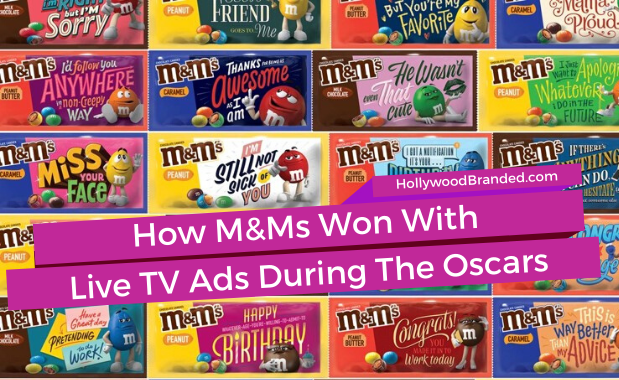 In recent years, Oscars advertising has started to get more interesting, with brands using the Oscars as the night to launch their new advertising campaign materials.   And in some instances, even in the actual Oscars show.  And now, M&Ms is stepping it up even further by creating custom themed content specifically aligned to the show.

It makes sense for a brand to launch a campaign during Oscars, in front of a giant audience, where water cooler conversation the next day is going to carry it onward to have people looking at YouTube to see what other people are talking about if they missed it.   But there is a step up even from there - where the brand creates custom content very much so tied to the big event TV moment, and which will pretty much be played out once that moment in time is over.

Creating that custom content is a challenge in some ways because that creative is going to cost money - and usually when a brand spends a lot to create TV ads, they plan on running the ad campaign for a long enough time frame that they monetize the costs of creating the ad, including the celebrity endorsement factor.  All that cost savings goes out the window when tying in to a single night's special event.

The Live TV Feeling Ad Spot - For A TV Show

This year, ABC used the feel of "live TV" to be part of their commercial breaks, for two separate brands - one their own, and the other an advertiser.  And they used their pre-planned and timed campaigns quite smartly.  The goal was to be able to show commercial content that would seem like it was in the literal moment, with the ad commenting on or showcasing takeaways from what just happened seconds before within the show.

In the case of the TV show Roseanne's big announcement that the show would be aired live on March 11th, we watched the Connor family sitting together watching the Oscars and commenting on the moment before when they just saw Parasite win.

WOW AMAZING might be the first thing you think of. That is incredible. They have a film crew shooting the cast right this very minute.   Or... you take a moment and remember that in the land of TV everything is pre-planned, and realize they just recorded 5 different takes of the TV family commenting on all 5 possible Oscar nominee wins as winners.

M&Ms has not been a TV advertiser during the last 5 years, and to champion their comeback, the creative teams at Disney and M&Ms worked together to create a series of ads that - similar to the Live Roseanne ad, were shot to be able to respond to every scenario preceding their airing.

That means those ad spots were one and done, right?  Well... kinda.  M&Ms actually debuted their series of 8 :15 ads to launch their new "Messages For Every Occasion" product line campaign with two ads run in the BC pre-Oscars Live on the Red Carpet broadcast and six ads run throughout the Oscar episode.

Check out some of the spots below:

According to their press release "As a part of the M&M'S Messages program, the brand is launching 36 uniquely-themed packages with messages."  The packaging ranges from ""You make mama proud," to "Congrats on that thing you did," and "I love being socially awkward with you,"" now allowing M&M'S to have a quote for "every person, feeling and occasion."

Additionally shared in the press release:

In addition to the new Messages featuring everyday occasions, the brand is giving audiences even more to gush over alongside celebrities, movies and red carpet looks this award season with a chance to get their hands on an exclusive M&M'S Messages-themed entertainment box for Hollywood's biggest night. Starting today, fans and viewing party hosts can purchase the curated M&M'S Messages Party Box: Red Carpet Edition, complete with:

There will be 92 boxes available to coincide with the 92nd airing of Hollywood's most anticipated award show and will be sold on a first-come, first-serve basis at www.mms.com.

The Why Of The Live Ad

Remember that moment when the Super Bowl went black?  As in, total absolute loss of feed?  Well Orea's had one heck of a person in their social media seat, and they captured that moment with a tweet timed to perfection with "Power out? No problem.    You can still dunk in the dark."

It was a tweet heard round the world, and it was a game on moment for brands to start getting more involved in the pop culture that surrounds them. 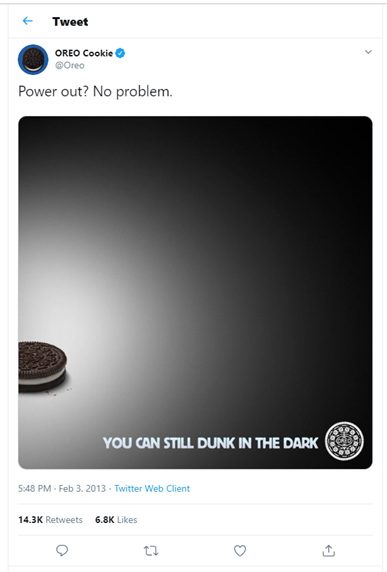 Ad Age reports that Disney and M&Ms worked hand in hand on the creative, with M&Ms creative team being given insight on some of the show content that would be performed, allowing for those 'in the moment' ads seem to happen.  Plus five drafts of the same ad were able to be created similarly to the Roseanne feel - with just five different movies voiced in to cover whichever movie might win.

M&M’s also kept up their live feed on Twitter to play off of what was happening on TV. 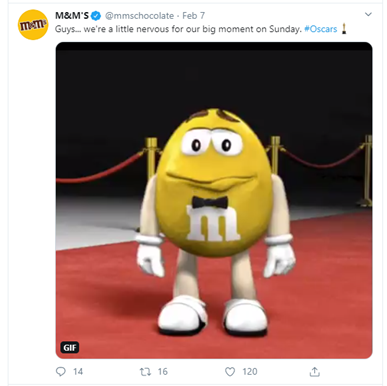 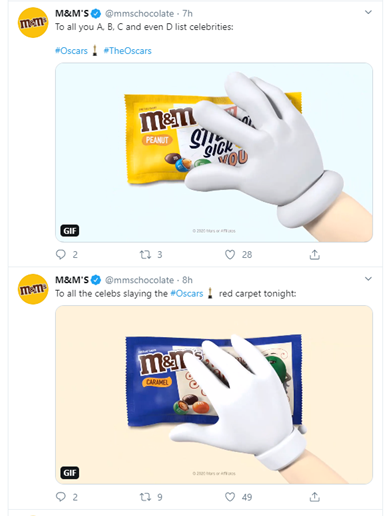 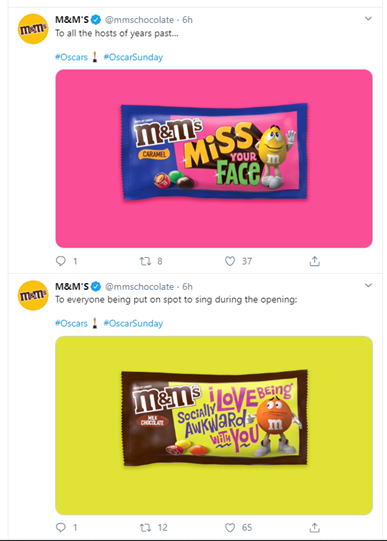 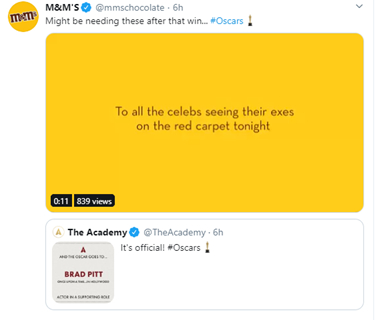 What's Smart About The Ads

It's not easy getting your ads noticed.  And the combined creative teams at M&Ms and their ad agencies along with ABC Disney did a great job creating content that got noticed and was thematically aligned to the content. The addition of the experiential element of the 92 custom boxes for purchase created a nice add on for a PR story as well, and gave the campaign some extra legs to stand on.  And lastly, that all-day all-night twitter campaign, with someone's carefully crafted pre-written Tweets just sitting waiting to go out at the touch of a button and time to perfection... that doesn't just happen. It takes work.

Check out some of our blogs our team has written on The Oscars...

One of the ways many brands jump on the Oscar or other award show band wagon is with sponsorships and celebrity activations at the pre and post events surrounding the big night.  Download a list of the events you can consider for your brand below.