Why Brands Should Be Paying Attention To New Forms Of Television

The 2016 Golden Globes celebrated the best of this year's film and television. Traditional networks were nominated and in attendance, as usual, but the networks and companies that made a big splash were non ad-based and non-traditional like HBO, Starz and Showtime, as well as the kings of SVOD: Hulu, Netflix and Amazon.

The New Players In The Golden Globes Game

We all know the big networks: ABC, CBS, NBC, FOX... and the list goes on. Many brands look primarily at these shows when considering product placement because it's easier to know the exact numbers of who is watching the show - and therefore seeing their product.

However, streaming video on demand as well as cable networks that don't have ad buys are becoming more and more powerful players in the game. They aren't just releasing content people love, they're releasing content critics love and when they win big awards, it gains the world's attention. Brands that have taken advantage of these shows and have integrated their product are now reaping the benefits of all eyes shifting to them. 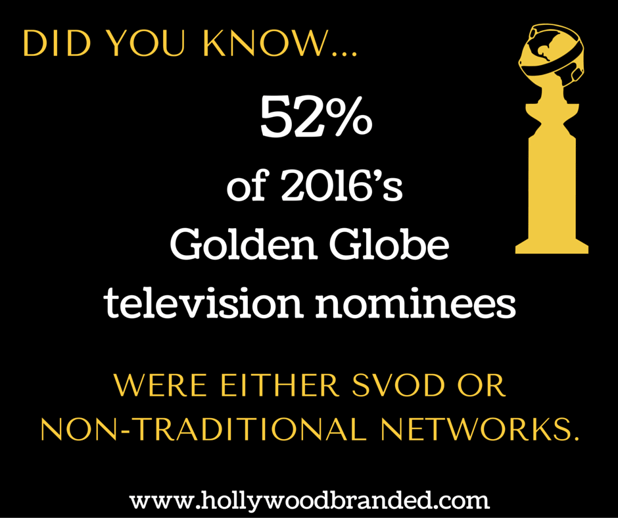 As we've mentioned on our blog before, Streaming Video On Demand (SVOD) is the future of television programming. Companies like Hulu, Netflix, and Amazon are putting more and more money into the production of original series; and the better these series do, the more money they have to produce more quality content. And watching these shows has become a phenomenon sweeping the entertainment world.

Brands often overlook these shows because they are different from what viewers and marketers are used to seeing.  One reason is that these companies don't release their numbers, which makes it very hard to see how many eyeballs are on one episode. However, by the sheer talent they recruit for television shows (Kevin Spacey isn't cheap, trust us) we can surmise that the shows do very very well for the network and are more than worthwhile for brands to be a part of.  And the estimates that are being bantered about online show numbers higher than some of the top performing network TV.  When adding in the international reach, we may be talking Super Bowl numbers.

The Golden Globes certainly didn't overlook these television shows that weren't on the traditional broadcasting stations. Here are the SVOD big names at the 2016 Golden Globes.

Netflix is the first name most people think of when they think of online streaming services. And many believe it to be the Godfather of quality original content made by streaming services, with its premiere of and continued work on House Of Cards. Since the show's release to great critical and audience acclaim, Netflix has expanded its original programming to 9 dramas, 5 comedies, countless continuations and other programming totalling over 100 shows with much more to come.

As far as dramas go, Netflix had a nominee in almost all categories for television. For Best Television Series - Drama, Narcos was nominated. The drama category also found Robin Wright with a nomination for her performance as the hardened and clever First Lady in House Of Cards, as well as Ben Mendelsohn for his supporting role in the family drama Bloodline.

Netflix had quite a few comedy nominees as well. Orange Is The New Black was nominated for Best Television Series (for the second year in a row). From the same show came Uzo Aduba's nomination for Best Performance by an Actress in a Supporting Role in a Series, Limited Series or Motion Picture Made for Television for her portrayal of "Crazy Eyes" in the series.

Lily Tomlin got a nod as well for her performance in Grace and Frankie, as did Aziz Ansari for his role as the main character in his own comedy about life as a late-twenty-something in Master Of None. 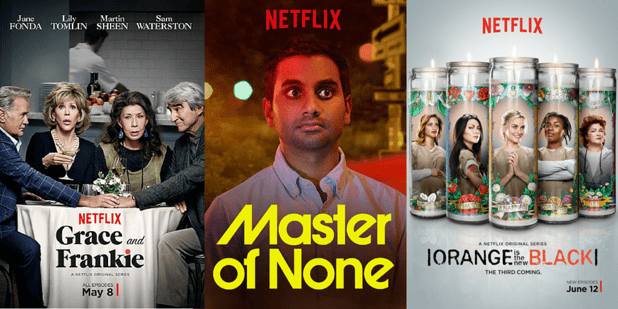 While none of Netflix's shows or actors took home a Golden Globe, the fact that they had 8 nominations shows just how big of an impact the company is making on quality television programming.

Right now, Amazon only has 9 current original series. However, the name of the game is quality over quantity with this streaming service, and they certainly take this to heart. Each show reflects the amount of time and effort put into it.

Even their pilots are something a bit different - instead of going the traditional route and shooting a pilot that only a few people at ad agencies and the network can see, Amazon posts and advocates for viewers to vote on their favored content, which will then be greenlit to series.  Talk about crowd sourcing!

Amazon also has countless shows in the works as well, and we will certainly be excited to see what is in store.

Transparent is an Amazon original that has picked up quite a few Emmys and Golden Globes since its first season in 2014. At this year's Golden Globes, it was nominated for Best Television Series - Musical or Comedy and its star, Jeffrey Tambor, was up for the Best Performance of an Actor in a Television Series - Comedy. Judith Light also got a nod for her supporting role in the series.

However, it was Mozart In The Jungle, a lesser-known underdog that was perhaps the biggest winner for Amazon and SVOD shows in general. The series took home the Golden Globe for Best Television Series - Musical or Comedy and its star, the lovable Gael Garcia Bernal, won a Golden Globe for his portrayal of Rodrigo, the main character of the show.

Amazon is stepping up their game as far as quality programming goes, and brands would be wise to take advantage of the budding opportunity.

The cast of Mozart In The Jungle celebrates their Golden Globe win.

While Hulu's original programming is just getting its feet on the ground, they started off strong with their quirky original comedy series Casual being nominated for the Best Television Series - Comedy or Musical category. Hulu is definitely a service to keep an eye on as it has recently gained an influx of subscribers with its addition of Seinfeld to its arsenal as well as picking up The Mindy Project to continue on its service after FOX cancelled the show.

"Non-Traditional" is a label we give to networks that work differently than your basic television station. Many of these are subscription-based and must be ordered or subscribed to.

Another thing that sets these networks apart is that they don't have commercials, and therefore have no ad space for brands to buy. Because of this, product placement becomes more valuable when the option to buy an ad is out of the question. These are the networks like HBO, Starz, and Showtime.

This year, at the Golden Globes, these networks made up a good bit of the nominees and reflect a trend of quality programming from these companies as well as recognition from awards shows. This makes product placement with these shows potentially very very valuable to a brand. And with these networks now offering digital stand alone subscription services, they offer extremely good viewership numbers.

Shows like The Sopranos and Sex And The City have kept HBO on the map over the years, but it was arguably Game Of Thrones that brought the network back into the spotlight when it debuted to wild popularity in 2011. This spurred more new shows than ever from HBO, including Veep, Silicon Valley, Ballers, and True Detective, all seeing massive success in their own right.

HBO is also known for its well-crafted documentaries and movies. Last year, its documentary Citizenfour, examining and documenting the Edward Snowden leak, won an Oscar. They have certainly followed up with some serious contenders this year.

David Oyelowo was nominated for Best Performance by an Actor in a Limited Series or a Motion Picture Made for Television for HBO's psychological thriller Nightingale. Oscar Isaac took home the gold however with a Golden Globe in the same category for his performance as the young mayor of Yonkers in Show Me A Hero. 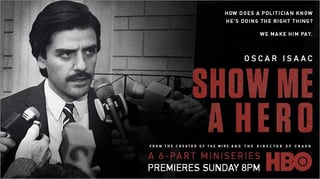 Julia Louis-Dreyfus received a nod as well for her performane in Veep. HBO is a vast land of opportunities for brands looking to incorporate product placement or brand integration into their marketing strategy. Not only do the shows get great critical reception, but are very widely watched. In fact, Smirnoff found Silicon Valley so on target to its consumers that they incorporated the lead actors T.J. Miller and Thomas Middleditch to be the face of their latest campaign.

Starz was probably most well-known in times past for their show Spartacus. But after season one of the series when the main actor lost his battle to cancer, they seemed to fall off the map a bit with a central focus on quirky. However Starz has been making a strong comeback in the past few years, and this year's Golden Globes solidify their place as a creator of quality television programming. 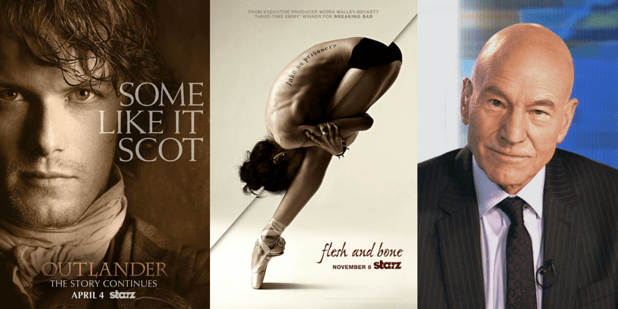 Starz's Flesh And Bone, a drama miniseries about a ballerina becoming the new face of the fictional American Ballet Company also got a few nominations, including Best Television Limited Series or Motion Picture Made for Television, as well as its star, Sarah Hay, receiving a nomination for Best Performance by an Actress In A Television Series - Drama.

Patrick Stewart also received a Best Performance by an Actor In A Television Series - Musical or Comedy nomination for his role in Blunt Talk which is a Starz original.

Showtime is a network that sometimes flies under the radar compared to the big names like HBO. However, it has built a name for itself as being the creator of consistently good television. This year, the Golden Globes recognized their great content.

Showtime had three actors that were nominated in this year's Golden Globe awards.  Liev Schreiber was nominated for his riveting role as Ray Donovan and Eva Green also received a nod for her performance in Penny Dreadful.

Maura Tierney took home a Golden Globe for Best Performance by an Actress in a Supporting Role in a Series, Limited Series or Motion Picture Made for Television for her role in The Affair. 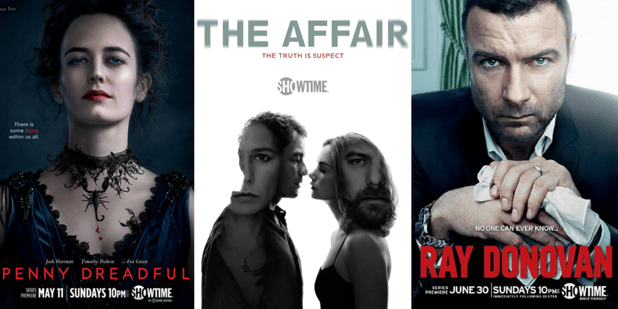 The Time To Get Your Brand Involved Is Now!

These non-traditional television programming networks and services are in their infant stages. These companies will grow and grow, adding more and more programming each season. Brands should carefully consider their options and look at just how powerful placement in or integrations with these shows could be.