Fashion has made the NBA a spectacle both on the hardwood and on social media. Players like Russell Westbrook, Jordan Clarkson, and LeBron James treat every arena entrance like it's a fashion show, and it has rubbed off on both fans and other players alike.

Hoopers have some of the best styles in the world and continue to push the needle on what's "cool."  In this blog, Hollywood Branded shares the best looks from the 2022 NBA Playoffs. 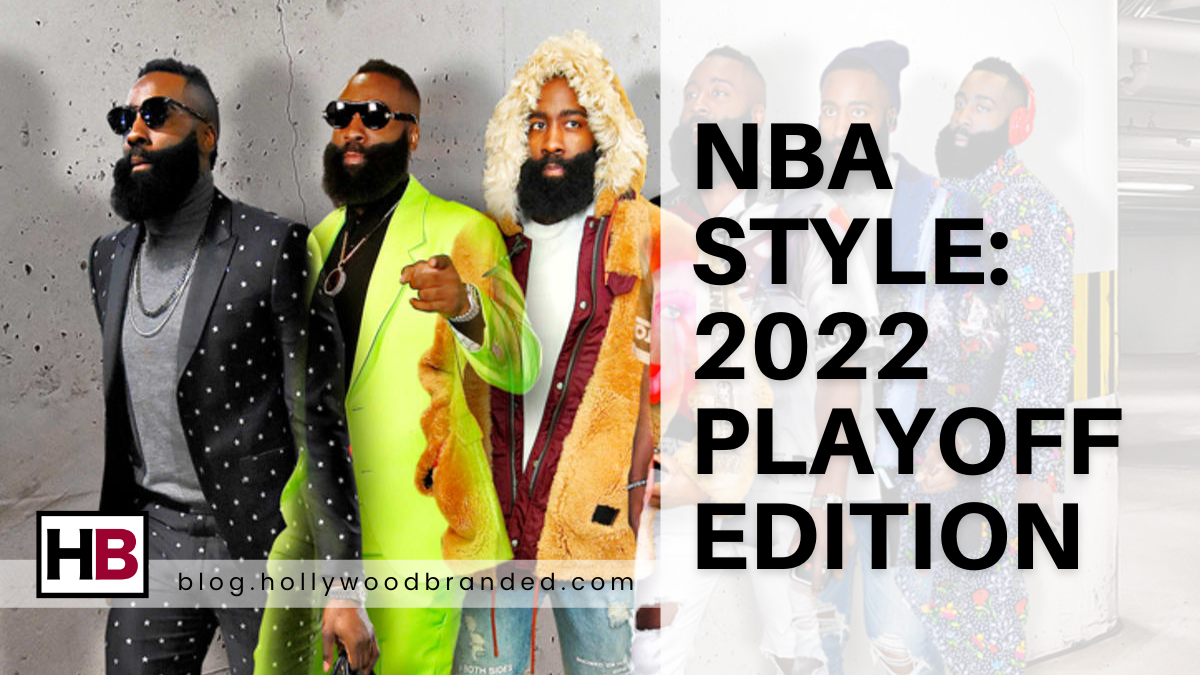 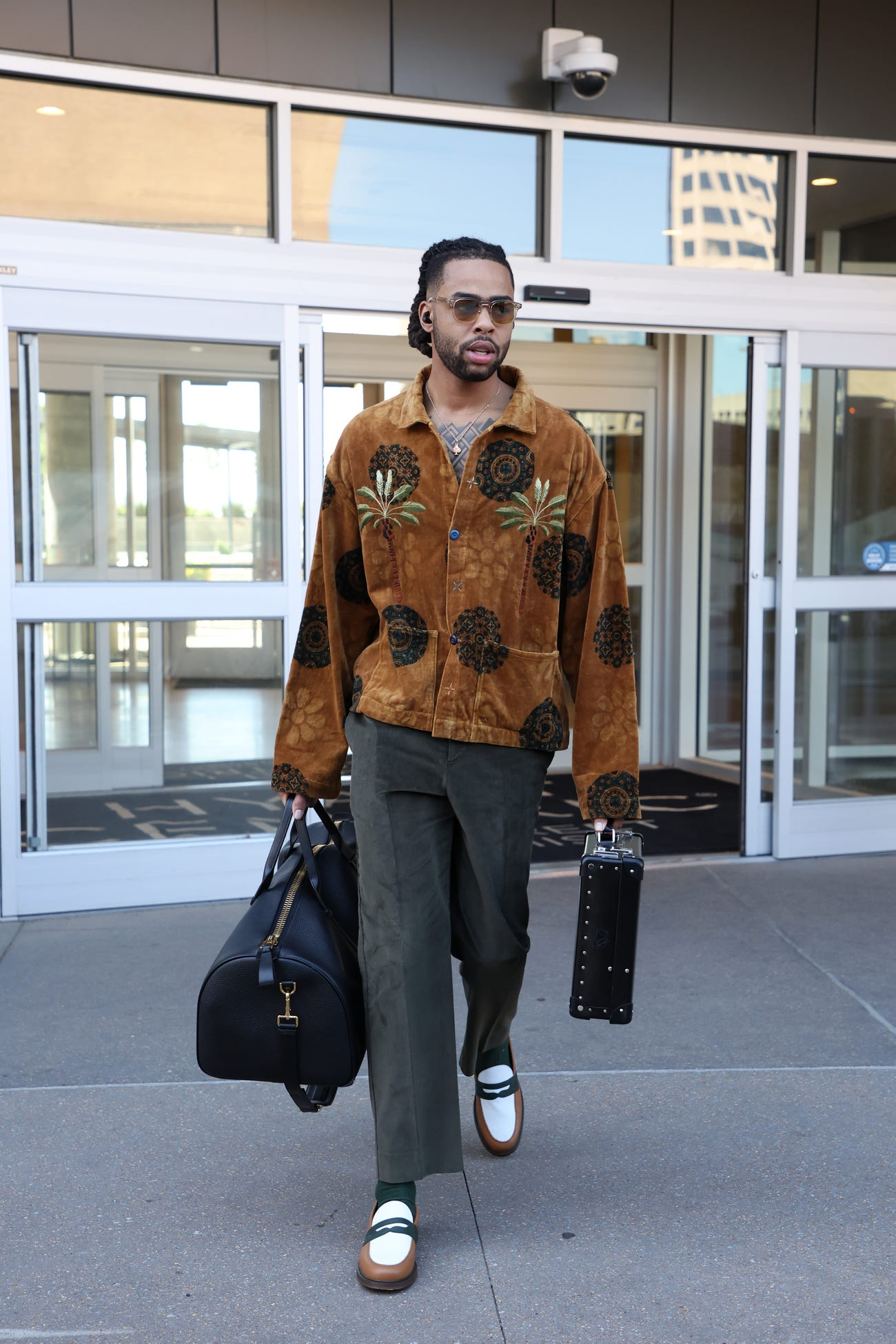 Minnesota Timberwolves point guard D'Angelo Russell, is a style trendsetter no doubt. He is seen here before game 5 vs the Grizzlies in a palm tree jacket, oversized pants, and a smooth pair of loafers to top it off. On the court, he just recently inked a deal with Li-Ning, making him 1 of 5 players that have signed to the brand. In 2020 H&M launched its spring campaign which was curated by D'Angelo, rooting himself deeper into the fashion world. Although the Timberwolves have been eliminated from contention, keep your eyes open for more looks from this NBA Style Icon next year.

Love him or hate him, Chris Paul is one of the best point gods to ever do it. The 37-year-old just recently took his team to the Western Conference semifinals where they were knocked off by Luka Doncic and the Dallas Mavericks. His style, much like his game, is timeless yet bold as the yellow suit and white sneakers pictured can attest. Paul has been a Jordan athlete for 15 years and is often seen wearing player exclusives on the court that the public only wishes they could get their hands on. A sure-fire Hall of Famer, and a style icon both on and off the court. 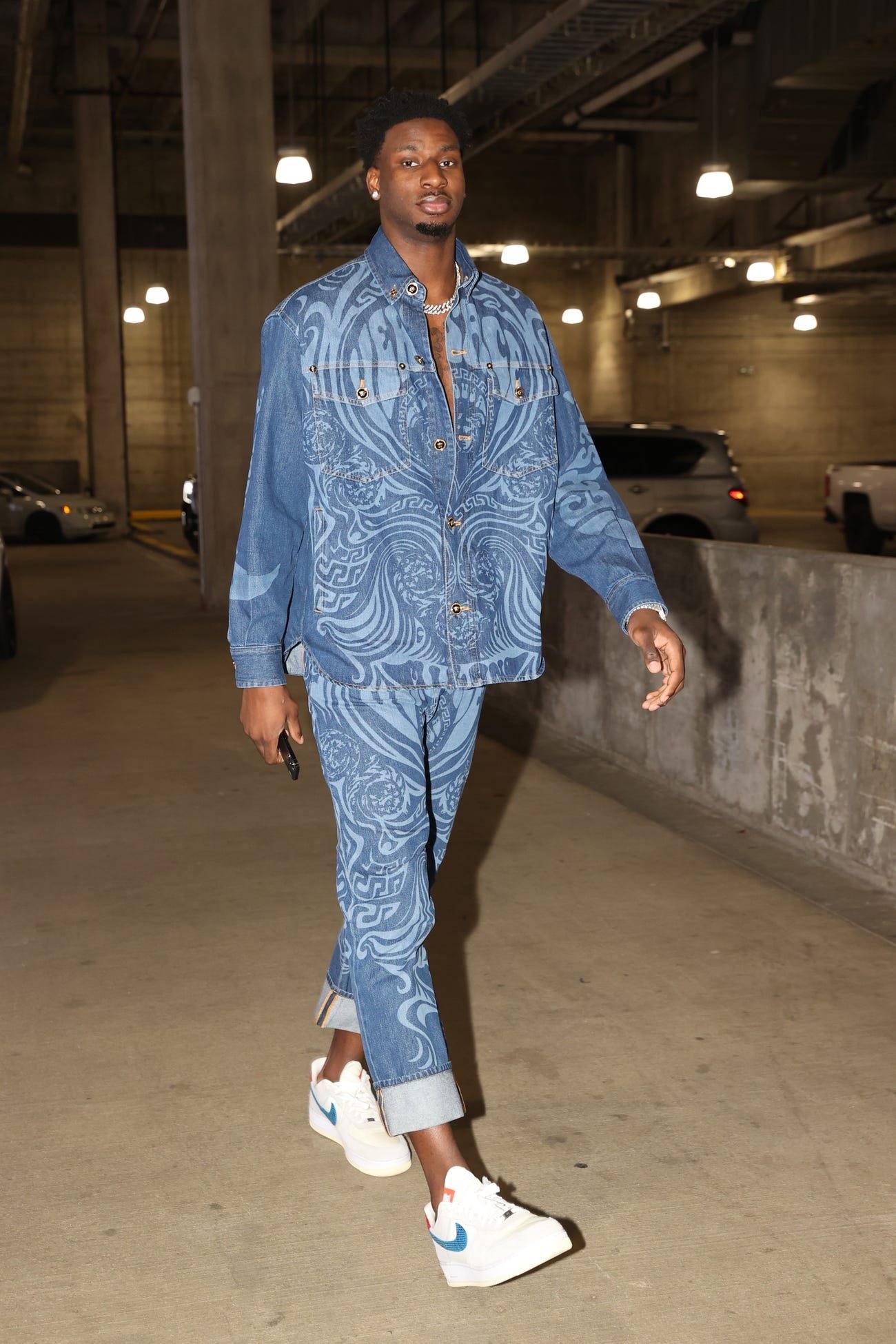 One of my personal favorite 'fits from this year's playoffs comes from Jaren Jackson Jr. of the Memphis Grizzlies. This bold denim on denim look topped off by a crispy pair of Nike AF1s is a head-turner undoubtedly. Reminiscent of something I would put together, Jaren takes this look to the next level with a popped collar and cuffed denim, giving off an effortlessly cool aesthetic. Being a Nike athlete comes with its perks, as Jaren has access to all of the new exciting releases which he rocks both on and off the court. Finally, to cement his place in the fashion world, Jaren was recently featured in the February issue of GQ where he touched on style, his incredible defense, and the Grizzlies' exciting young core, who made a run all the way to the Western Conference Finals this year. 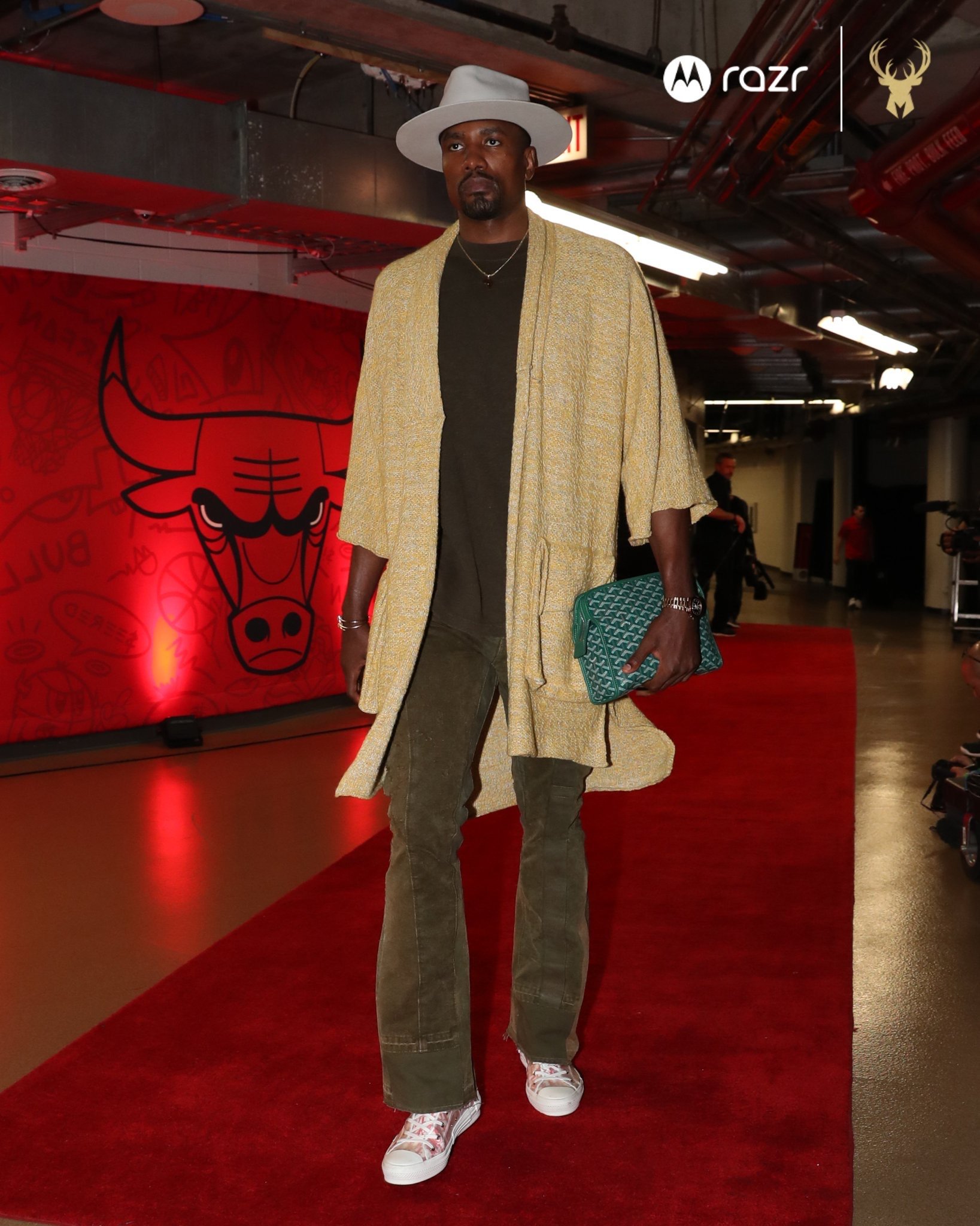 NBA vet and Milwaukee Buck, Serge Ibaka is no stranger to effortless style in the pre-game tunnel. Seen here sporting a fedora, a maize-colored cardigan, oversized olive pants, and the Dior B23 sneaker. With an Adidas endorsement, Serge has released his own custom colorways of Adidas models for fans all over the world to play in. In 2020, Serge let people know he was serious about fashion when he came out with a collab with the Canadian label Nobis. Heading into his 15th NBA season we know one thing for sure, his fedora game doesn’t quit. 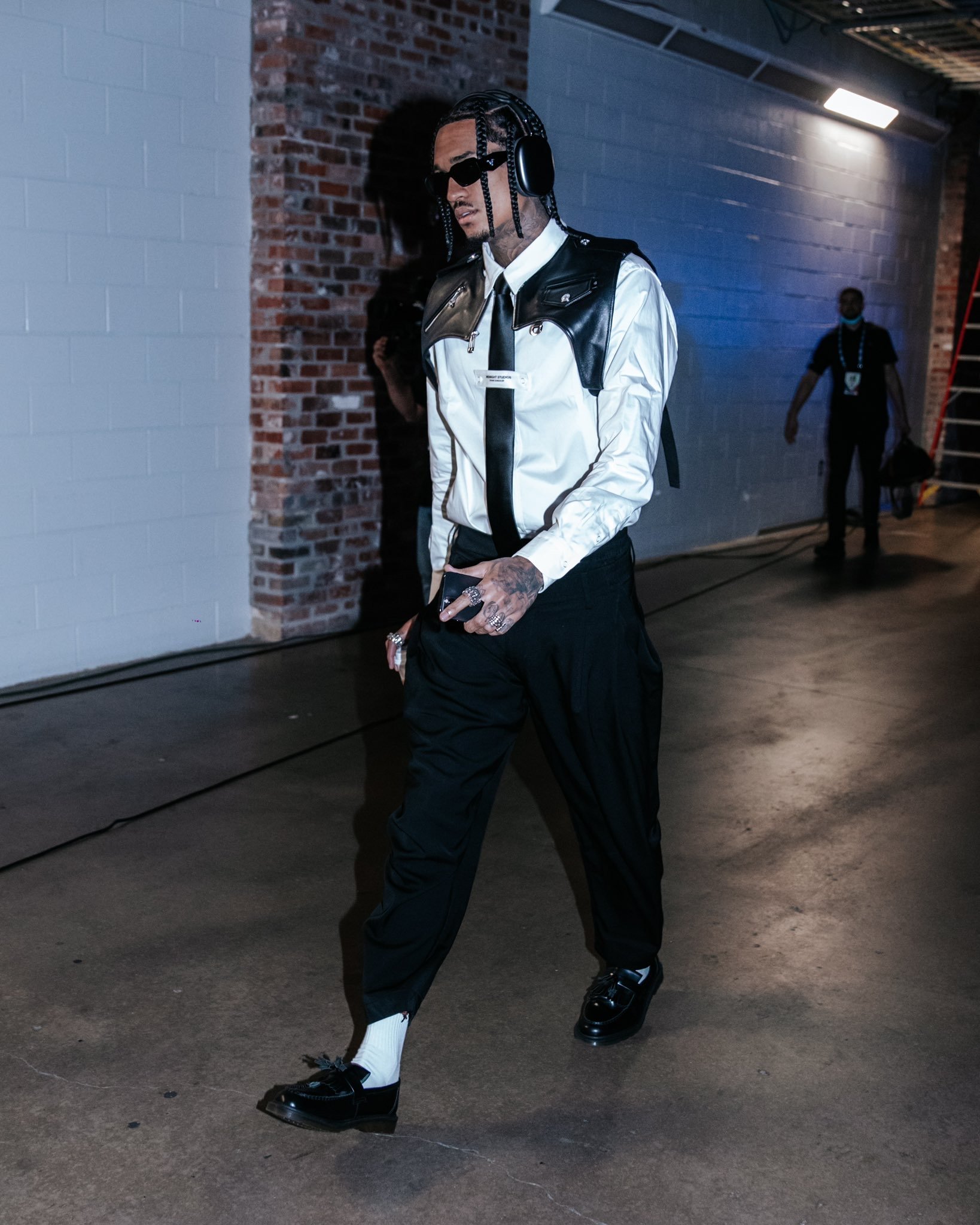 The Utah Jazz's lethal scorer, Jordan Clarkson, is the best-dressed player in the NBA. He is pictured here walking into the tunnel before his game versus the Mavericks, wearing a white and black dress shirt and oversized dress pants with a shiny black pair of loafers; giving off Michael Jackson Thriller vibes. His style is so on notice that Lululemon picked him to be their first-ever NBA Ambassador in 2021. Also in 2021, Clarkson opened a pop-up shop for his clothing brand "Good Vibe Tribe", where fans could only shop for 48 hours before the designs were gone forever. Apart from being an explosive scorer on the court, Clarkson has made a career for himself in the fashion world.

NBA players are known to debut shoes and pieces from the hottest brands before they come out because it's the 3rd most-watched sport in the world and has a major influence on purchase decisions. As the sport continues to grow and expand, so too will the eye-popping styles from your favorite players, so keep your eyes open during the 2022-23 season!

Eager to learn more? Check out these blogs written by the Hollywood Branded team filled with similar content.