PVOD:  How To Watch Movies From Home While Still In Theater

Inside What May Become The Next Trend Of Entertainment

Over the holidays, whispers circulated through the industry that a Premium Video on Demand (PVOD) test in Canada was on the horizon with the major studios, and that theatrical titles could be available within as quickly as a three-week window after initial release in cinemas.

The topic of PVOD has come up several times in the past year, and recent talks spawn all the same three questions: How will this affect the entertainment industry? Is this actually a win for movie-goers? What is the future impact on studios? In this blog, Hollywood Branded discusses how to watch movies from home on PVOD, and the impact for movie-goers, and studios alike...and the benefits for brands who do product placement. What Is PVOD And What Does It Mean?

Now, I know what you're thinking: what the heck is PVOD? PVOD stands for premium video-on-demand, and in a nutshell would entail new movies being available to stream within the close time frame that they are first released in theaters. From a studio perspective, the option is viewed as the best chance to combat declining DVD sales, wherein high-priced rentals would be available sooner to the public. Not to mention, a shorter theatrical releases allows rental campaigns to jump on the movie's main marketing budgets, and allows viewers to stream movies while they're still getting hype. This also means more eyeballs immediately for brands who do product placement in the films.

And it's not just American companies who are in on the conversations either, as the Canadian theater powerhouse, Cineplex, recently reopened the discussion over the holidays as reported by Deadline. Cineplex already boasts being the largest multi-faceted entertainment provider up in the Great White North as far as tickets and VOD (video-on-demand) services are concerned, with almost 8,500 titles available to buyers via its own VOD portal. So really, it comes as no surprise that they are listening to recent talks versus running scared as many US theater chains have done. But despite Cineplex CEO Ellis Jacob's optimistic view of PVOD, there are major stipulations that will have to be accounted for before new-title streaming becomes the norm up in the Great White North. As of now though, any talks of plans are just that... talks.

State-side, AMC has also been approached on several occasions with the possibility, but followed suit like their fellow theater companies and declined any offers, for now...

During a conference call with Wall Street analysts, AMC Entertainment CEO Adam Aron said he sees just two possible scenarios for PVOD. “Either PVOD simply will not happen in the U.S. anytime soon... Or, if it does happen, it will happen in a way that is agreed to by AMC and profitable for AMC even when taking into account cannibalization from people watching movies outside of our theaters.”

Which brings us to the key issue when agreeing to move forward with PVOD: No one has figured how much exhibition theater chains will get out of PVOD, and there are some studios that believe they shouldn’t get any profit at all! Of course, exhibition stocks have been dwindling at a steady pace thanks to a lackluster summer blockbuster season, which Hollywood Branded also discusses in our blog Franchise Fatigue: Hollywood's Newest 'F' Word. As far as insight into the affect of PVOD one distribution mogul went on to comment, “It would be an awful time to install PVOD, it just wouldn’t be good for the theatrical side of the business.”

Not to mention, exhibition investors worry that the implementation of PVOD would coax movie-goers to stay within the confides of their home, subsequently affecting ticket and concession sales in theaters.

Is 'Going To The Movies' Going Down The Drain?

One of our favorite movie researchers, Stephen Follows, conducted a study on the state of the box office, which shows that in six years, the global box office grew by 15%, from $34.7 billion in 2012 to $39.9 billion in 2017. 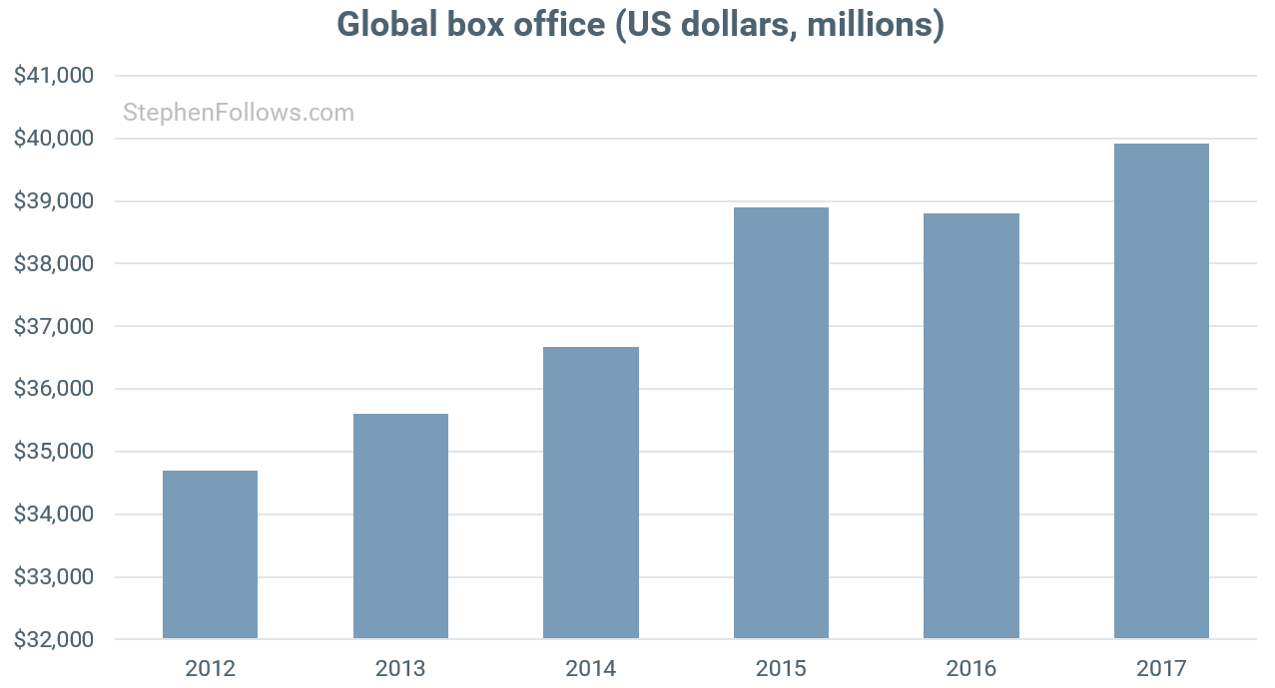 However - the US and Canadian box offices (they combine them for the 'domestic box office') versus the international box office shows a very different outlook.

The domestic box office is declining - or at least staying fairly static, while international is booming.  Stephen's research shows that "In 2012, domestic takings made up 31% of the global gross, whereas in 2017 it was down to 28%." 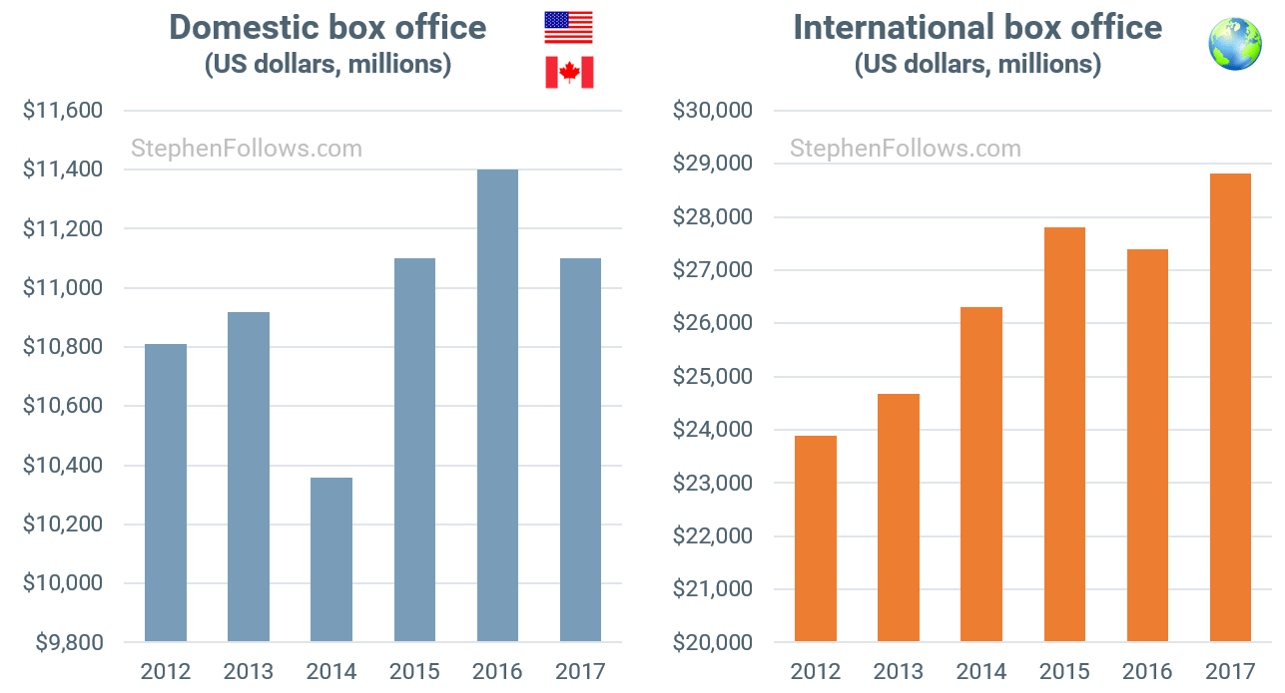 Taking all of the above into consideration the answer is a potential yes at least for the last year, but that could be based on the films that were released as well.  Needless to say, those are still significant numbers and the downfall of movie going is not happening quite yet. It may as well be that there the move going experience is just hitting a wall - a cap of sorts, to how much money can be made theatrically in this present climate.

With all the current speculation swirling around Hollywood, the talks of bringing PVOD closer to reality remain in the infantile stages of discussion.

However, that isn't to say PVOD will never happen, it very well might according to Lionsgate CEO, Jon Feltheimer, who went on to say, "I think it will expand the pie. I think it’s what, clearly, what consumers want and I would dare say, if it were possible for us all to get in a room together and have exhibitors and studios and digital distributors all get in a room together, I’ve seen enough research to really believe that it’s really something that would be good for everybody and I really believe that in the next 12 months we’re going to see some tests done and some territories in the near future, I think that will happen. I think it would be great for the business."

As Netflix continues to up their game, they naturally want their content to be recognized in major award ceremonies, like The Oscars. However, that award ceremony in particular will not consider a film, unless it has a theatrical release - which has lead the streaming platform to pursue releasing their content both digitally on their platform as well as in theaters simultaneously. With this in mind, a merging availability of content both in theaters and at home seems inevitable.

Where Do You Take Your Brand From Here?

Have no fear, Hollywood Branded is here to be your guide in the world of the entertainment industry. Check out our previous blog on Why Marketers Must Adapt: Binge Watchers and Video On Demand, and an inside look at Disney's future as far as streaming services go in What The Disney-Fox Deal Means For Hollywood.

Interested in taking the next big step and getting your brand on the big screen (or small screen thanks to VOD)? Download our pricing guide, we look forward to working with you!