With each passing year, we see brands not only become more involved both in Pride initiatives but also just in queer content. As recently as ten years ago, it was considered controversial for brands to support pride causes or even same sex marriage.

Now that we live in a very different climate (in so many ways), we've seen a large transformation both in the ways that brands engage with and support LGBTQ causes and media. In this blog, Hollywood Branded discusses the impact that brands have when partnering with LGBTQ content and how it proves a win for brands and shifting the conversation. 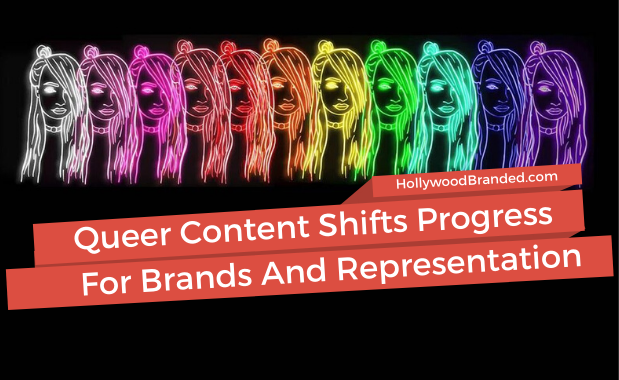 LGBTQ Rights were considered a hot button issue as recently as ten years ago, before the Supreme Court rule in 2015 that denying same sex couples the right to marriage was unconstitutional. Prior to this decision, a brand partnering with LGBTQ causes and specifically Pride events was not unheard of - but it was certainly more taboo. Fast forward to today and the landscape looks very different. The conversation has shifted in many ways, though it is clear that brands have really begun to lean into LGBTQ causes and content.

As I wrote about last year (Brands That Invset In LGBTQ Pride) brands have had a very long history of fascinating ways that they've chosen to partner with such causes. In fact, now the conversation is less about if brands will partner LGBTQ media and more of how they will do so (this of course excludes brands who have voiced opposition).

One of the most important arguments held in this conversation is the fact of representation. It holds true, not just for the LGBTQ community, but of all marginalized communities. Representation matters. Marginalized communities historically have had minimal representation in media, and often many older depictions are tokenized or riddled in stereotypes. This makes us look back and pose the question - does it really matter if content and media goes out of its way to portray these communities and is there a measurable sign of success? As it turns out, the answer is yes.

Recently GLAAD partnered with Proctor & Gamble to survey people about queer media and whether its impacted people's views. A recent article from Variety cited that of this survey "found that 48% of non-LGBTQ people became more accepting of gay and lesbian people over the past few years because of their representation in media. Moreover 80% of those surveyed said they had become more supportive of equal rights for LGBTQ people after being exposed to them on television or at the movies, while only 70% of those not exposed to LGBTQ people in the media felt this way."

This is an exciting find for queer media, as it proves exactly what was assumed - fear is the result of a lack of exposure. Once people saw more LGBTQ characters on TV, their biases against them largely dissipated and rapidly too. And that is precisely why brands should feel more comfortable partnering with queer content and media.

It really shows you how far the conversation in branded partnerships with LGBTQ figures has gone when we consider the most recent work brands have done with Kim Petras. Known for being the first trans pop artist, Kim Petras has proved that her name has influence and brands are not afraid to work with her.

Here's an example of a collaboration that Petras did with Tinder to promote their activation from last year's Pride festival in New York. This was an excellent partnership as it helped the brand use the rising star to help promote their PR initiative. Naturally as she is a member of the LGBTQ community herself, her fan base is predominantly within the community as well. 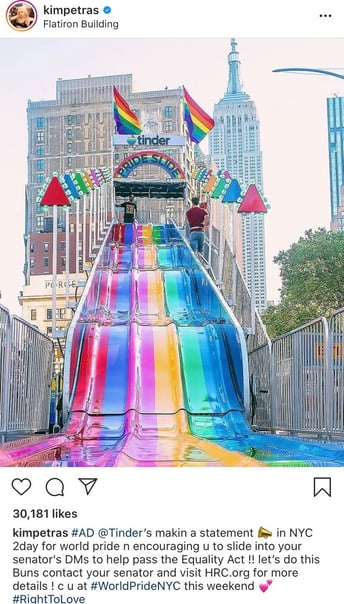 After that, the pop princess partnered with the makeup brand, Sally Hansen to promote their new nail polish line. Having your line be the beauty products people stand by and trust is every cosmetic brand's dream. As both Kim and her followers have a heavy interest in makeup, she's the perfect way for Sally Hansen to tap into a younger audience of Gen Z makeup enthusiasts. 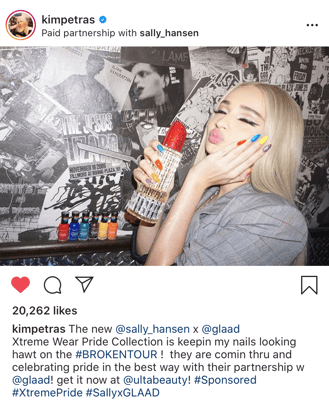 And then most recently, Petras collaborated with Vogue on this video advertorial. In this feature of her going through her favorite things in her bag, we see brands like Prada, Marc Jacobs, Tic Tacs, Tom Ford, and Pat McGrath.

As you can see, as she's consistently proven to be a strong partner for her brands, she continues to rise with bigger and more meaningful partnerships. Now a full blown celebrity influencer, watch out world, Kim Petras is the next big thing!

Perhaps the best case study to point to the full potential of product placement in queer media is the Netflix show, Queer Eye. The original show Queer Eye For The Straight Guy airing on Bravo (aired from 2003 - 2007) was at first a shock value lifestyle improvement show starring five gay men who gave makeovers to straight men who were positioned as desperately in need of help. The show was successful for its four season run, and was pivotal to normalizing the presence of queer people in media.

The one major problem with the original show was that it was riddled in cliche and stereotype. It was fun and it helped an older viewing audience ease their comfort with queer portrayal but the content does not translate seamlessly in today's context. However, Netflix had the brilliant idea to bring the show back with a new spin - now titled simply Queer Eye, the show focuses on helping uplift all walks of life, not just comically oblivious straight men.

The feel good content of Queer Eye follows the new team as they travel across the world, helping to bring beauty wherever they go. But being as it is travelling show, costs can add up pretty quickly. How to offset all these costs? Branded Integrations! Many big level brands have made an appearance on this show.

Here's a photo of the crew with their guest attending classes at Orangetheory to help promote the guest embracing a healthier relationship with fitness and of course to help advertise their service as a gym. 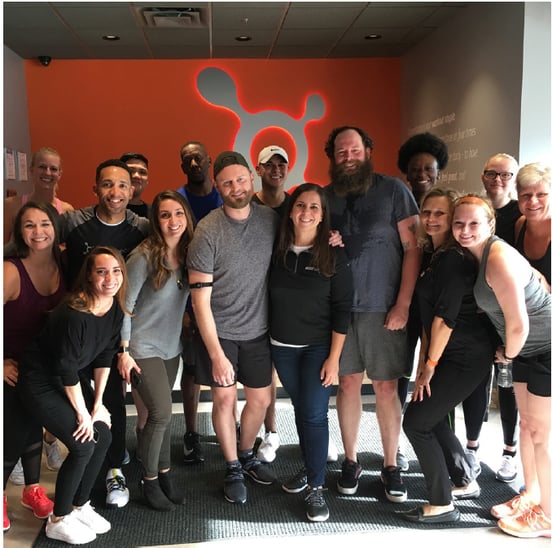 Then there was the time Tan took a show guest to Target in a segment teaching viewers that you don't need to go to premium department stores to dress well. 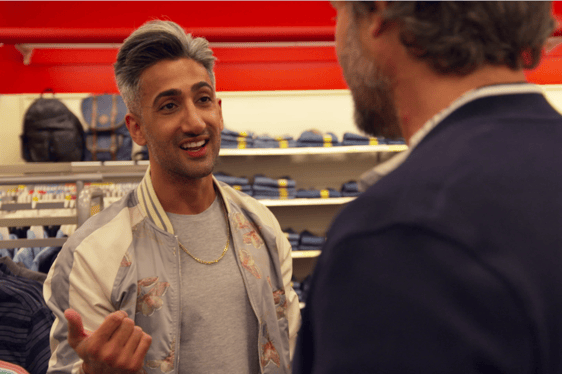 Oh and did I mention that our team also has helped secure product placement integrations in this show? Here's an image from the time we worked to partner the team in visiting a Lacoste store that provided a new wardrobe to help their new friend in need. 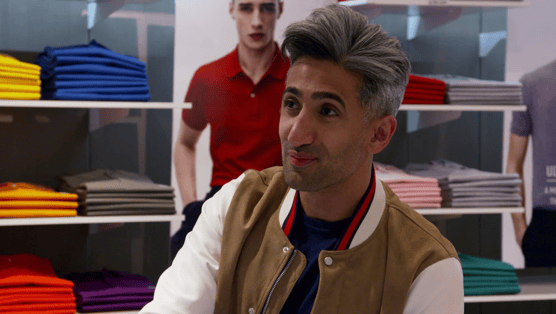 And last but least, there is the Queer Eye team's iconic apartment where they reconvene at the end of every episode. It was entirely furnished by West Elm, who in turn have this photo on their website so fans of the show can purchase things they like to recreate their own version of it.

Queer Eye has truly proven that LGBTQ content can be a goldmine of opportunities for brands just like any other. And as its one of Netflix's most popular original shows, it doesn't show any signs of slowing down.

Strike A Pose - The Next Dance Step

It's understandable to assume that brands want to play it safe when it comes to investing in product placement and branded integrations. But not only does the data keep suggesting queer content is less taboo then ever, it's also more popular than ever. As show like Pose, The Politician and Ru Paul's Drag Race continue to pave the future for TV culture, their success will only continue and now is the time for your brand to find it's place in the rainbow spectrum of content!

Curious to learn about more ways that brands have found homes within queer and diverse content? Check out these other blog posts we've written on the topic!

Maybe you're less interested in reading about other case studies and more interested in learning how your brand fits into the mix. We have you covered on that end too! Check out this infographic we created on the basics of product placement!