If you saw Batman v Superman: Dawn Of Justice, it would have been impossible to miss Turkish Airlines as a massive part of the film - for both product placement and promotion with a co-branded TV ad that debuted long before the film.

For airlines, partnerships with movies open up huge global opportunities for brand marketing and promotional partnerships.  And with films having scenes that take place around the world, all airlines have the opportunity to reap in the rewards of brand awareness these films and TV shows offer. In this blog, Hollywood Branded looks at partnerships between airlines and films, and how the brand integration partnership is a strategic benefit for both. The Justice League's Airline Of Choice Is Turkish Airlines

For someone who can fly herself wherever she pleases, the way Wonder Woman chooses to travel through the air is a big deal to her - and she of course chooses Turkish Airlines in the film Batman v Superman.

Turkish Airlines and Warner Bros. inked a massive product placement and promotional deal for the release of the first of their new Justice League themed franchise. Not only were they seen throughout the film, but the brand also had an extensive TV media driven promotional partnership with the film.

The airline released Batman v Superman themed care kits for passengers and wrapped one of their 777s with an ad for the movie. Talk about a massive billboard. Those aerial banner companies you see puttering through the sky at the beach would be very jealous.

In two TV spots featuring Ben Affleck as Bruce Wayne and Henry Cavill as Clark Kent (aka Batman and Superman), as well as Lex Luthor (Jesse Eisenberg), the stars reveal two new Turkish Airlines "destinations:" Metropolis and Gotham City.  This is more than just product placement and integration - it delves over into the land of celebrity endorsement deals, as the actors played prominent roles within this footage.
Check out our blogs on celebrity endorsement deals:

Up In The Air - Airline Product Placement Gold

Up In The Air, a 2009 film starring George Clooney, revolves completely around air travel. Clooney plays a traveling businessman who loves being in-flight more than anything in the world. He adores his first-class treatment as a man who is nearing the "10 Million Mile Club" and is earnestly awaiting the moment he hits it.

Clooney's character appreciates the luxury of air travel more than probably anyone alive as he spends most of his time on an airplane. And that's he flies exclusively American Airlines. 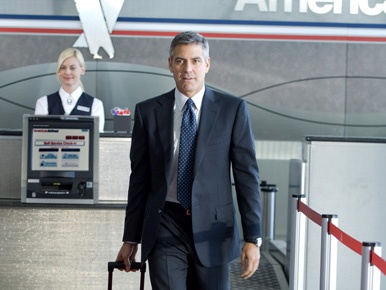 What is remarkable about this partnership is that it is perhaps one of the greatest example of airline product placement in film history - yet not a single penny was exchanged. The airline got massive exposure in exchange for locations, branding, and props - including their planes.

American Airlines hit the jackpot, but the movie makers did equally as well, as renting an airplane for a movie is costly, timely, and difficult. Plus there are all those pesky fees saved from actually having to pay to fly your cast and crew from point A to point B during filming - handled by American Airlines in this case as part of the deal.  It was a strategic partnership made in heaven, especially with the promotions American Airlines did with the film.

The Planes Of James Bond

British Airways takes the cake as far as the James Bond franchise goes, dating back to the 1979 film Moonraker where a British Airways billboard provides a crash landing for a henchman Bond has just fought off in an ambulance.

In Goldeneye, Bond boards a British Airways plane to get to St. Petersburg and in Die Another Day, Bond is on a BA flight from Cuba when he is served a vodka martini by none other than Sir Roger Moore (an actor who previously played the famous spy's daughter.)

Virgin Atlantic challenged British Airway's reign as the airline of Bond when they were spotted throughout Casino Royale and Skyfall. Although Bond never exclusively flies Virgin Atlantic, the interior of a Virgin plane was used to film a bar scene. The airline also ran a huge James-Bond themed promotional campaign complete with James Bond himself, aka Daniel Craig at the time.

In Quantum Of Solace, James Bond and his wealthy enemies only fly the most luxurious private jet company, Ocean Sky on their way to Austria. The product placement for Ocean Sky in the film included internal and external shots of the planes as well as an Ocean Sky desk with a woman in uniform who answers the phone jovially with a "Ocean Sky, guten Abend" (Which translates as Good Evening). Bravo, Ocean Sky. 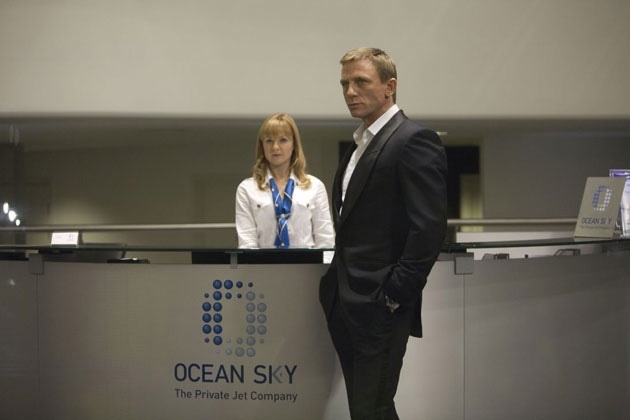 A film doesn't have to have planes in it for airlines to take advantage of promotional partnerships with studios.

WestJet, a Canadian airline, introduced a Frozen-themed Boeing 747-800 complete with Elsa and Anna on the side and a fully-decorated interior cabin. Disney fans oohed and aahhed at the details of the plane and it was a huge success for the company. 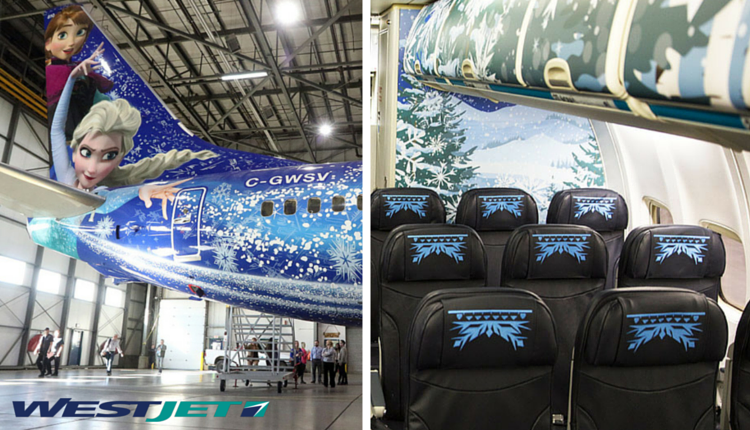 WestJet isn't the only airline hopping on the bandwagon - All Nippon Airways has a Star Wars themed line of jets along with an R2-D2 themed Boeing and Air New Zealand has had The Lord Of The Rings and The Hobbit themed planes for years now.

Virgin America created a 'themed flight' experience with Entourage with trips between New York and Las Vegas - with a customized Airbus, an "Entourage Class" on flights, and an in-flight advanced screening of the first episode of that season. Not only do these planes offer fans a pretty cool experience, but work hand in hand to promote the films as well as the airlines.

The fact is - there are dozens and dozens of feature films (and hundreds more TV series) that are open to and looking for airlines to align with to help offset high travel production costs, which we write about the reason why in our blog 3 Reasons Why Productions Use Product Placement.  It takes planning of course, and connections (which our agency brings to the table) but there truly is no stopping airlines interested in this marketing practices - opportunities abound!