Campaigns That Assembled For The Mega-Marvel Movie Event

When half the universe has been wiped from existence, the world's most powerful heroes must come together a final time to avenge the fallen, once and for all. With anticipation at a maximum surrounding the film came a slew of brand partnerships, but only a handful stood our amongst the rest for top spots.

Just who made the list for Earth's mightiest marketing campaigns? We've assembled them for you. In this blog, Hollywood Branded brings you the top brand partnerships with Avengers: Endgame with just a snap of our fingers! ... Wait, too soon? 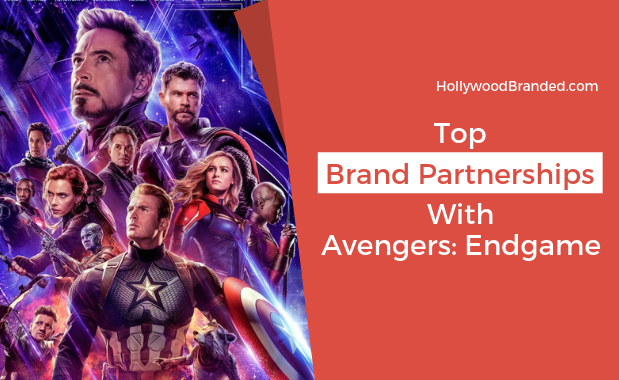 Not Your Average Avengers Movie

Early reports say the film is currently tracking to open domestically in the range of $230 million and $283 million, with worldwide projections as high as $800 to $840 million. Everyone anticipates tracking to fluctuate closer to the release date, but if the broken records in North America and now more recently China, it's safe to say the Disney-Marvel behemoth is on-track for a massive box office overhaul.

After the devastating events of Avengers: Infinity War the universe is in ruins, and hope all but lost. Adrift in space with no food or water, Tony Stark sends a message to Pepper Potts as his oxygen supply starts to dwindle. Meanwhile, the remaining Avengers -- Thor, Black Widow, Captain America and Bruce Banner -- must figure out a way to bring back their vanquished allies for an epic showdown with Thanos -- the evil demigod who decimated the planet and the universe.

What exactly will come of our heroes and beloved characters remains a mystery... good thing we have some brand partnerships for you to read to pass the time until the movie hits theaters! Without further ado, Hollywood Branded brings you the top brand partnerships with Avengers: Endgame -- spoiler free! 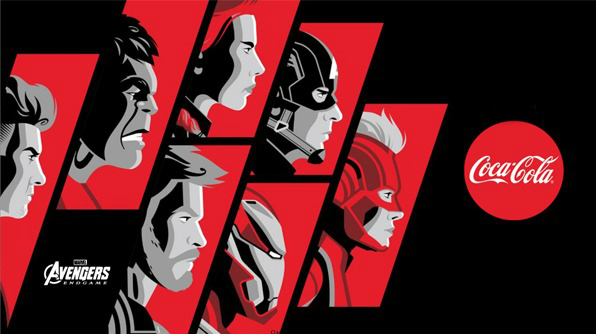 Even superheroes need to quench their thirst, and when they do, you can bet it'll be with a Coke. Marvel has teamed up with Coca-Cola for an international promotion of the highly anticipated film, to unveil a limited edition line of Avengers: Endgame branded Coke cans.

The beverage company and the Avengers have partnered together in the past, most recently for the release of Ant-Man and the Wasp back in 2018 with the new Coca Cola Mini line. In case you need a memory jog, here's the hilarious video:

This time around, Coke Zero cans wear the notable white, red, and black colors featured in one of the latest Endgame trailers. Each collectible can depicts the side portrait of a recognizable hero, the entire set showing off the complete cast with the likes of Captain America, Iron Man, Thor, Hulk, and newcomer Captain Marvel, as well as Thanos.

The limited-edition Coke Zero cans are available in limited international markets including Japan and Thailand... but there's cans popping up on eBay for fans who live in others parts of the world.

In anticipation for the release, the Coca-Cola Thailand division released a commercial featuring a young woman who misses the bus to the Avengers: Endgame screening must sprint through obstacles to complete her mission. During the ad the infamous Avengers theme plays in the background and easter egg props donned by Captain America, Thor, and even some Black Widow martial art moves are highlighted.

Accompanying the video was the caption (translated roughly from Thai to English): Awaken the power of your hero, join the hunt for all Avengers: Endgame Coke Zero. Collect all 7 cans of 7 heroes today. Along with the ad were the hashtags #CokeXAvengersEndgame and #UpliftTheHeroInsideYou as part of their Thai social media campaign. 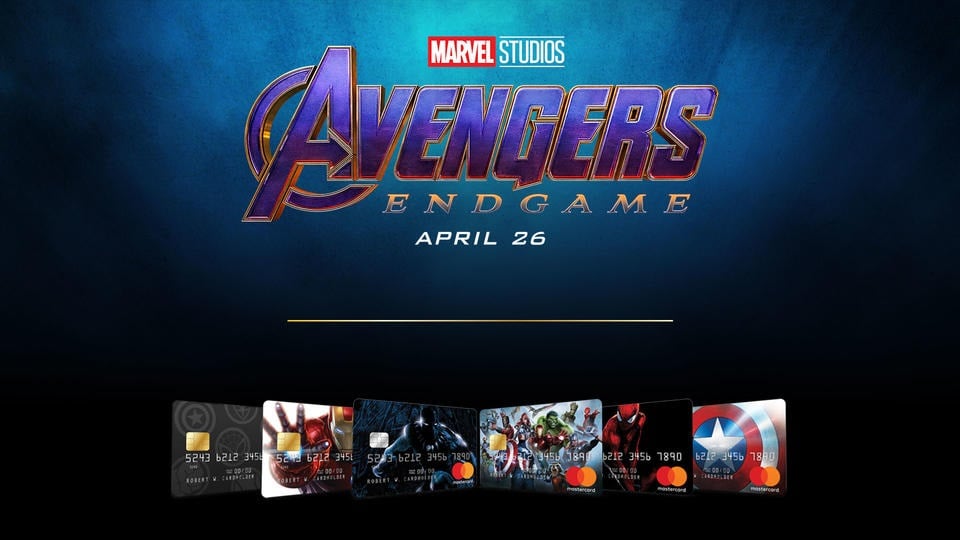 In promotion of the film, Marvel Entertainment and Mastercard partnered for a truly priceless sweepstakes, giving fans a chance to win a trip to the premiere of Avengers: Endgame.

To enter, fans 18 years and older could apply for a Marvel Mastercard between March 1st and 31st. The winner would receive a 3-day, 2-night trip to Los Angeles including hotel, airfare and transportation for them and one guest, and both received tickets to the premiere of Avengers: Endgame.

Still need more incentive? Applicants get their choice of hero-branded Mastercard with characters such as: Black Panther, Ironman, Spider-Man, and more! Have we convinced you to take advantage of a good deal? The Marvel Mastercard is still available! Apply through their website here.

Stuck in the middle of an intergalactic battle and need a way out? Don't worry, Hertz will get you there. In promotion of the Marvel blockbuster, Hertz released a custom TV spot showcasing several heroes from Avengers: Endgame, and how Hertz takes the stress out of car renting.

Aptly titled 'No Drama' the spot shows how travel can feel like something out of a battle scene, but Hertz takes the drama out of the car rental process. As a couple goes through the carefree process of renting a car with Hertz, the heroes from Avengers: Endgame engage in a dramatic fight in the background.

Will there be an appearance of Hertz in Endgame? Thus far, there's been no word but only time will tell. Maybe that's how Tony Stark gets back to Earth... Spoiler? 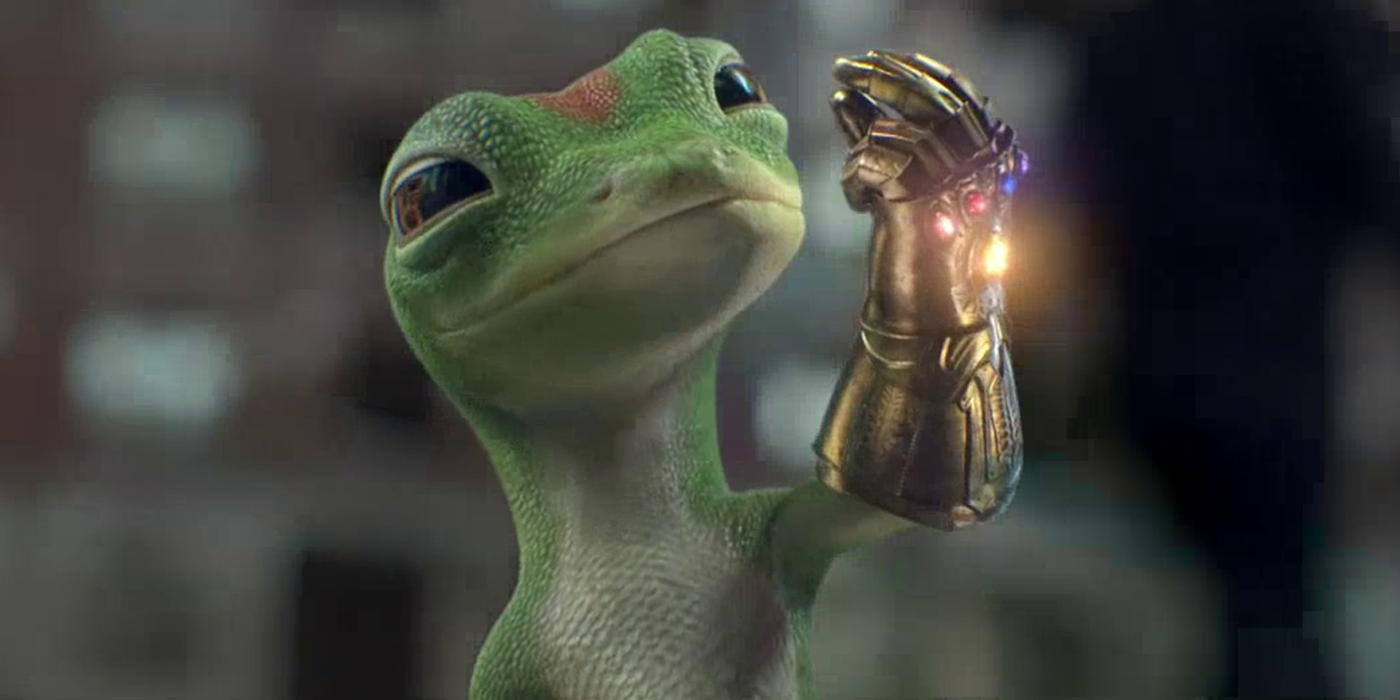 What happens when the GEICO Gecko wears the Infinity Gauntlet? That's exactly the question posed during the ad. When the mascot passes by a theater showing Avengers: Endgame he momentarily envisions a world where he brandishes the Infinity Gauntlet and controls all six Infinity Stones. With the gauntlet on, the Gecko bends reality with a snap of his fingers, but instead of turning half the universe to dust he cuts the cost of insurance for a number of members, saving them major money.

The GEICO/Marvel commercials have become something of a tradition over the course of previous years. For Avengers: Infinity War a short ad was also released highlighting the Gecko seemingly joining the fight agains Thanos alongside the Avengers.

And back in 2017, a similar spot for Guardians of the Galaxy Vol. 2 saw the GEICO Gecko partnering with Groot to save the citizens of the galaxy (on their car insurance). Unfortunately, Groot couldn’t quite get his line down...

However, giving civilians like us super savings with great insurance is nothing short of heroic. Who knows, maybe that'll be the outcome of Endgame that Dr. Strange predicted for us. Personally, I wouldn't mind that reality...

When it comes to blockbuster partnership campaigns there's nothing better than knocking out the competition, and with some of Hollywood Branded's out of the comic-book thinking every brand can become a superhero in marketing!

Want to see other successful brand partnerships? We have you covered! Check out some of our other blogs on previous promotions and marketing strategies, and see what some out of the box thinking can do for your brand when it comes to entertainment!