You Think Your Film Is Worthy Of a Brand? Let's See!

Brands offer a really cool avenue for productions to either save money or make money. They can donate or loan products and services, saving productions hundreds of thousands, even millions of dollars. Brands can also pay productions money in exchange for branding and messaging to be included into the script, offering films and series extra dollars to do things like license more expensive music and shoot at more extravagant locations. 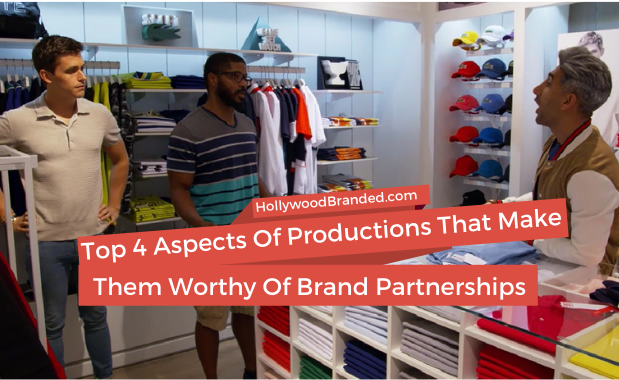 Many of the creative producers we speak with have such a strong passion for their craft that they just assume the brand will “get it” too. But for brands, its more than just a great storyline. The reality is that the marketing teams at these brands know blockbuster hits and celebrity gossip – the qualifications that trigger them to invest resources into a production. On top of that, they also have to get their bosses on board. And let us tell you, Jennifer Aniston goes a lot farther than the Indie actress with 10,000 Instagram followers.

Not every production has the budget to lock in Brad Pitt and Margot Robbie as leading actors. Though it doesn’t always help, a new-name cast doesn’t completely hinder your chances for brand partnerships. Ultimately, a brand is partnering with a film in order to gain as much exposure as possible for their company. They want to know that this film or series will be seen by as many audiences as could be. A huge part of that viewership number hinders on the distribution platform. Many films start off as Independent’s before they’re picked up by a large studio or streaming service. However, many of those films picked up, started off with a strong A-list cast. If your production doesn’t have that star power, but you DO have the blessing of Universal Pictures or Netflix, brands know that there is a guaranteed way that audiences will be able to access this content.

Take films like Crazy Rich Asians and Ready Player One – neither film had a crazy A-list cast, but they both had the might of Warner Brothers behind them giving them that legitimacy. It didn’t hurt Ready Player One to have Steven Spielberg sitting in the director’s chair either, and that brings us to our next point…

Having a production team with a great resume helps as well. This could come in the form of a major Director, notable producing team, critically acclaimed writers, successful production company, etc. While these names aren’t always as known to brands, if their successful projects easily pop up with a quick Google search, it certainly adds weight. We all know that actors carry a lot, but it’s the team behind the scenes that turn a production into a powerhouse. Most brands see that, and given the right amount of nudging from agencies like ours, they trust it will benefit their partnership.

Ultimately, all of the factors listed above equate to nothing if the storyline isn’t a fit for the brand. If the story isn’t going to engage with their demographic or fit into an organic storyline to feature the brand, this doesn’t work at all. The entire point of brand integration into content versus traditional methods of advertising like commercials is offering the viewer (hopefully!) a subtle, but still effective awareness of the brand.

For this reason, many period productions (productions that take place either in the past or in the distant future) are usually much harder to sell into a brand. If the production occurs in the past, the brand of course must have been around at that time and if it was, the brand then needs to dig up their logo/packaging/product model from that time period to fit the content. When this is the case, the brand is now losing its ability to showcase current day products that people can purchase today. The exceptions to this are major partnerships like the one between Coca Cola and Stranger Things where Coca Cola used the 80’s drama to create a capsule collection and sell their 80’s branding in stores. This was worth the effort from Coca Cola because the show was such a proven success, and they knew they'd be able to turn this into a marketing ploy.

Knowing that the goal for brand commitment is all of the above, brands really can benefit from taking risks on those productions that don’t necessarily have all of these ducks in a row. Productions should expect to reduce their rate because again, brands are taking the risk that starpower will be enough to land a distributor, or the influence of distribution will be enough to overpower the lack of an A-list cast, etc. Over the years, our agency has seen some real success when brands take the leap out of their comfort zone. A couple of our favorites are below:

When our team was first approached by the Book Club producing team, the film had no distributor. This was an Independent film, on a relatively small budget, that happened to have some great cast names attached – Jane Fonda, Candice Bergan, Diane Keaton, and Mary Steenburgen. Considering the caliber of the cast, our team was confident that this would find a distributor, so we convinced Bumble to take the risk… and it paid off! Paramount quickly came on board a couple months after filming wrapped, and Bumble saw great success in the content of the film, and we were even able to work out a co-promotional aspect with Paramount on the back end for a really well-rounded campaign. Here's a snapshot of the in-app promotion below. 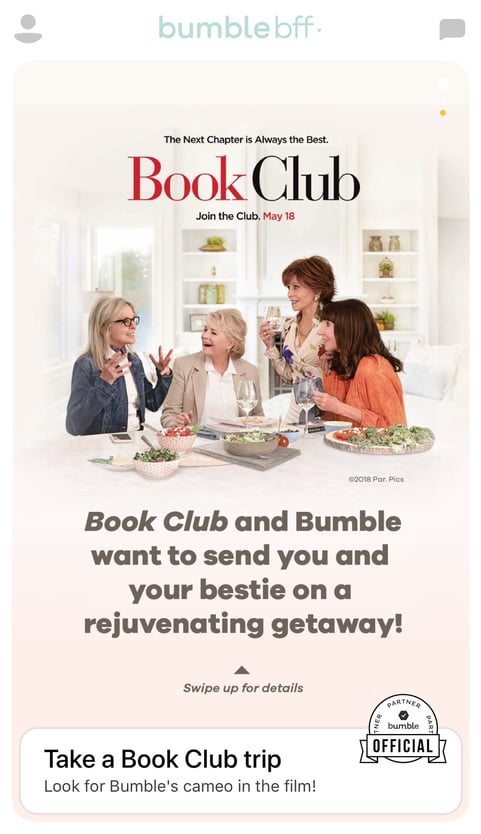 You can learn more about this partnership here!

When we first heard that Netflix was rebooting Queer Eye, we have to admit that even we were skeptical. How do you reboot such a classic and not even include the original cast!? However, once we got an idea of the concept and how Scout Productions was giving the series a fresh take, we knew it would be a great fit for our client, LACOSTE. Knowing that they needed looks and shopping trips for the makeovers, we convinced LACOSTE to offer production the opportunity to do an in-store shopping scene at one of their boutiques.

We say ‘convinced’ because while LACOSTE loved the concept, it’s a lot to risk a brand’s time, efforts, and money on a show that had zero awareness and fan base. But! As we all now know, taking a risk on that franchise was WELL worth it, and the brand continues to work with the show today.

Here's a shot from the in-store shopping scene. 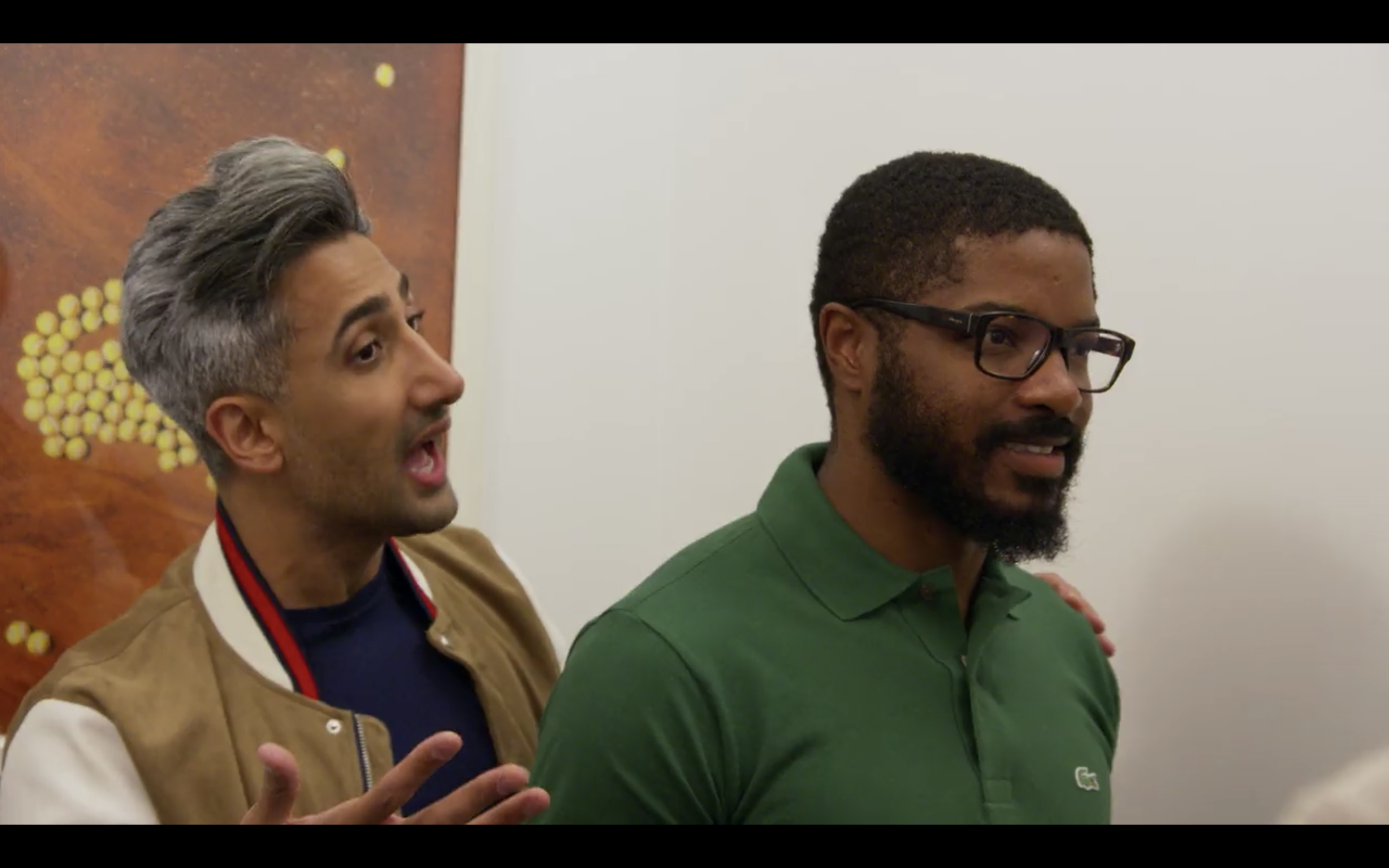 You can learn more about this partnership here!

It’s hard to remember a time when Netflix wasn’t a content powerhouse, but the day did exist… until House of Cards. House of Cards was the streaming platform’s first ever original series. Until then, people subscribed to Netflix solely to watch older movies and TV shows so educating brands on the fact that this show was airing only on Netflix was a tough sell. It was such a foreign concept.

When we were approached by the House of Cards team, we knew the concept was special, and when they requested about 100 BlackBerry phones for all of the main characters (and extra’s and back-up phones), we made sure to get the brand on board too. As you can imagine, this was a risk worth taking for BlackBerry. Having been one of the few brands so generous to the series in Season 1, BlackBerry devices were established with every major character so much so that it kept BlackBerry coming back season after season in order to keep with the continuity of the show.

Brands Needs SOMETHING They Can Find Faith In

The real message here is that brands need something of tangible value in a production in order for them to commit. There are hundreds of productions that come across our desk so as an agency, we look for those special X Factors that prove that this content will pay off for a brand. It’s a little scary to make that commitment, but the pay off is always worth it in the end!

Think You're Ready For More?

Then you're in luck! Check out some more related content below.