Top Marketing Partnerships With The Croods: A New Age

Unique Partnerships For A Unique Time

There is no doubt that the movie industry has been one of the single-handedly hardest hit industries in this pandemic. From the inability to actually shoot to the now debilitating theatre closings, we’re seeing an entirely new shape to the film industry.

However, despite the bleak landscape, some studios are using select production to brave the conditions and release in theaters. One of these recent films is the sequel to the Universal animated hit The Croods 2:A New Age, which opened at 2,211 theaters on November 25th, 2020. Mimicking a traditional release as best as possible, the studio utilized brands to help promote the film. In this blog, Hollywood Branded examines the top marketing partnerships with The Croods: A New Age and explores if they helped propel the film into success, given the new standards of success these days. 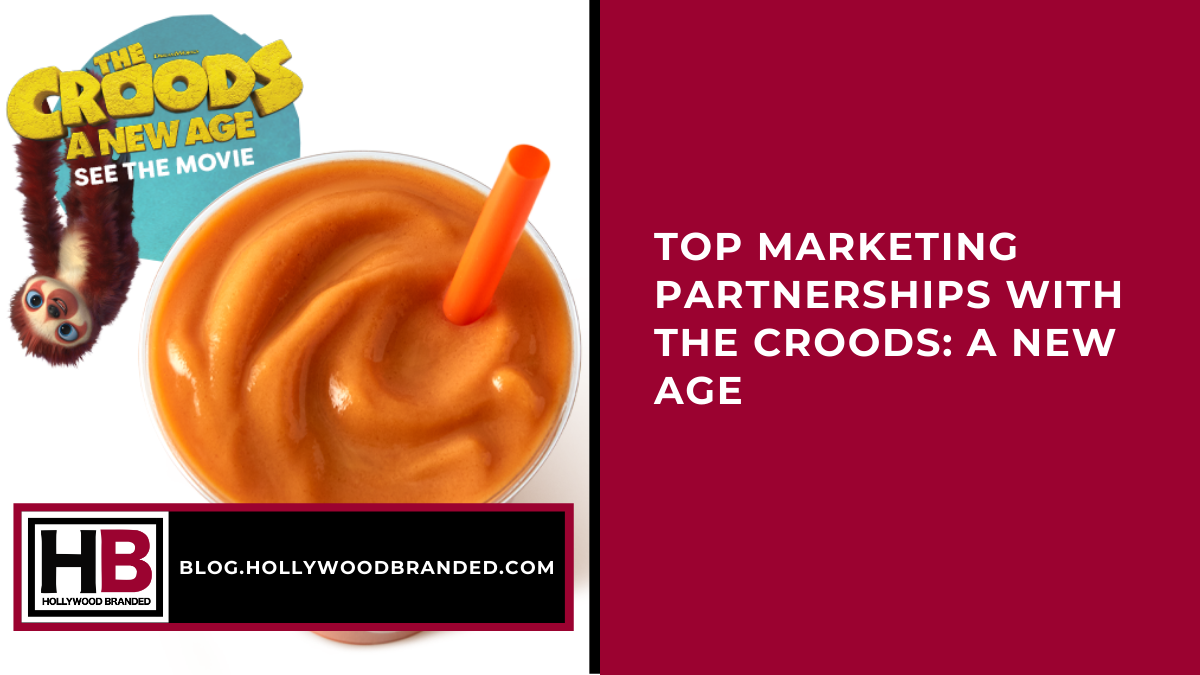 Universal got Jamba Juice in on the fun of promoting The Croods 2’s theatrical release. Playing on the colorful magic of both the film and Jamba Juice, the partnership came about pretty organically. Getting their 850 U.S locations involved, Jamba Juice announced two limited edition smoothies to their kid’s menu. These smoothies were themed to the film, named after its characters - Sash's Splash and Croodaceous Cooler. Knowing how difficult it is to get kids to eat their fruits and vegetables, Jamba Juice took this opportunity to get parents to bring in their kids and get them excited about getting their daily serving of fruits and vegetables. They promoted the drinks as not only healthy, but also tasty, colorful, and served in special Croods 2 cups.

According the partnership’s press release, Jamba Juice’s Nutrition Expert and Strategic Advisor, Sara Marjoram, MS, RDN, LD said, “Parents everywhere will agree that it can be hard to get kids excited about eating fruits and vegetables… We are proud to offer kids delicious options that parents can feel really good about. Plus, kids are sure to love the wild colors!”

Jamba Juice also promoted these new drink options on their social channels with posts like the ones below that garnered comments like, “SO excited for this,” “Woahhhh!” “Great movie and great smoothies,” and, “OMG I GOTTA TRY THEM!” 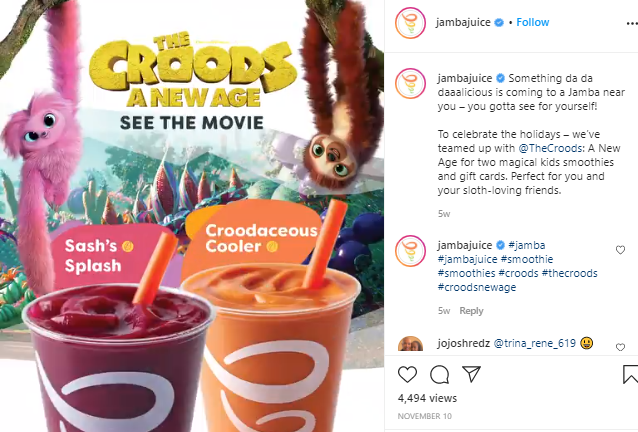 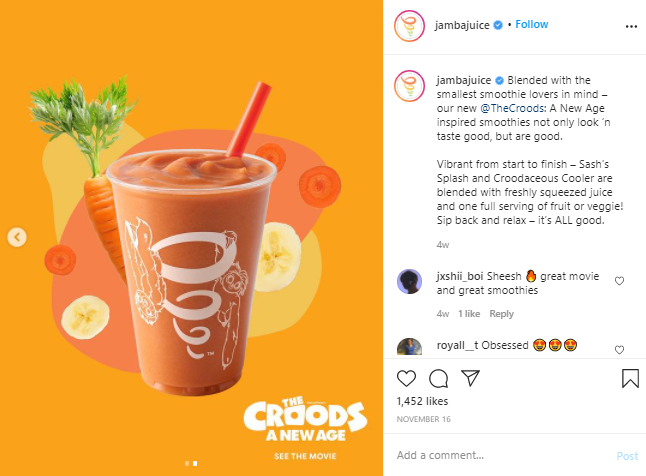 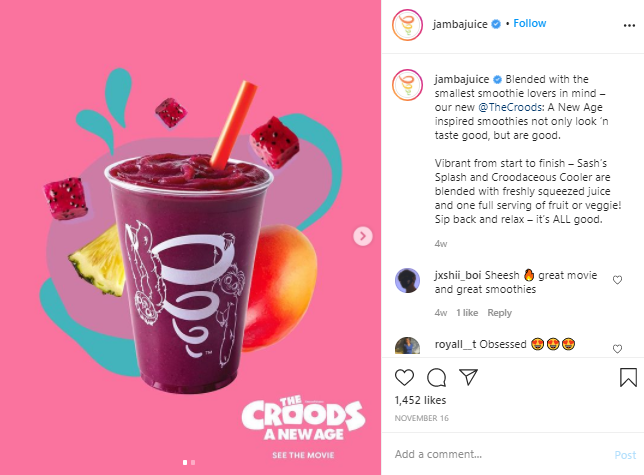 The promotion of every great kid’s film begins with a large QSR partner, and COVID be damned if The Croods 2 would miss out on that! Universal Pictures partnered the film with everyone’s favorite burger chain, Burger King where they incorporated the film into, you guessed it: the kid’s meal! There was imagery on the packaging, and of course the option of one of six special Croods 2 toys that could be found in the Happy Meal box. That wasn’t all though. The partnership also included in-restaurant promotion with things like counter banners, menu decals, and posters. The film also received exposure on Burger King’s website under the Kid’s Meal tab.

Burger King is a great place for anyone looking for additional eyeballs on their product. While the restaurant industry is hurting about as badly as the film industry, of all of the restaurants, a quick serve restaurant is the only guarantee you’ll get right now in terms of open access. This partnership began taking place over a year ago so that the burger chain had enough time to generate the 5 million toys needed for their Happy Meals. With over 7,500 Burger King locations participating, The Croods 2 stood a strong chance of gaining some great exposure courtesy of this partnership – to both kids and parents alike.

One of the more unique partnerships came about between Croods 2 and the banking app Chime. Having over 8 million customers, Chime is a banking app that offers fee-free financial services. They’re known for having no physical branches and not charging any monthly or overdraft fees. The brand partnered with the animated film by creating a fully co-branded TV spot, featuring the Croods characters and branding. The synergy here is that one of the film’s major themes was the Croods family coming to grips with a more evolved society, something that Chime certainly is for banking right now.

Check out the spot below!

In addition to the TV spot, Chime promoted the partnership across their digital and social platforms as well. This marked the company’s first co-promotional partnership with a major motion picture, and we don’t expect it to be their last. The paid media campaign was expected to deliver over 750 million impressions across TV, digital and social media. Impressions that certainly helped The Croods 2 reach a fresh audience of young parents.

While Christmas may look a little different this year, it does not mean that there still won’t be toys a plenty! That’s why the iconic New York City toy store, FAO Schwarz, is the perfect companion to The Croods 2. To celebrate the film’s release, the store did a complete Croods takeover of its holiday window display. The display, featuring 11 large-scale windows filled with character images and scenes from the film, wraps around 49th Street and onto Rockefeller Plaza, a key location during the holiday season given its proximity to the Rockefeller Center Christmas Tree and The Today Show studios.

The display went up about a week before the film’s theatrical release, and it will stay up through the holiday season, getting the film millions of eyeballs in foot traffic. The store also promoted the partnership on their social channels – check out one of the posts below! 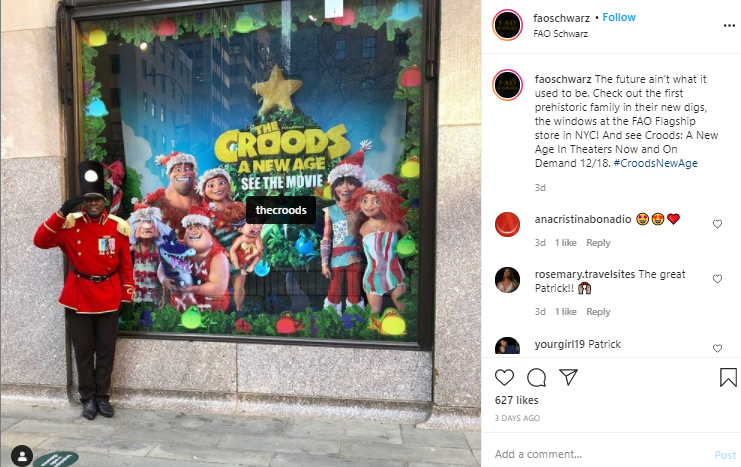 Well, all things considered, it did not do awful! Universal, itself, apparently spent an impressive $25.6 million promoting the film, which is fairly high relative to a lot of studios keeping their promotional budgets in the $5-7 million range. And as one of the few global theatrical releases during this time, Universal’s own promotional spend coupled with these brand partnerships certainly added a decent amount of eyeballs to this film.

So far the film has reached a global box office gross of over $76 million, which is very strong, considering the current theatrical climate. We also expect its revenue to skyrocket once the film is released on PVOD over the holiday season, giving parents a great pastime for their children while they're off on holiday break!

There's More Where That Came From!

Want to learn more about other films' promotional partnerships? We've got you covered! Check out some more content below.

If a partnership like this seems appealing to your brand, this is just the beginning! There are so many options for brand inclusion in the TV, film, and music world from placement in content to co-promotional partnerships like the ones listed above. Check out our pricing guide below, and let us know how we can help you!