As we are now deep in the fall season, it's the perfect time to cuddle up with a hot cider (or maybe hot toddy) and watch some of your favorite rom-coms. Admittedly, it's not my personal favorite genre of film, but some of them you just can't beat; they're classics for a reason! While perusing through Netflix recently, I came across perhaps one of the greatest rom-coms of all time, You've Got Mail and had to give it a rewatch.

With the iconic star power of Tom Hanks and Meg Ryan, this nineties hit truly does stand the test of time. And while their acting is honestly unbeatable, they're not the only stars of the show. In fact, some of the biggest presences they share the screen with are brands. In this blog post, Hollywood Branded takes a look at the top product placements in the film, You've Got Mail. 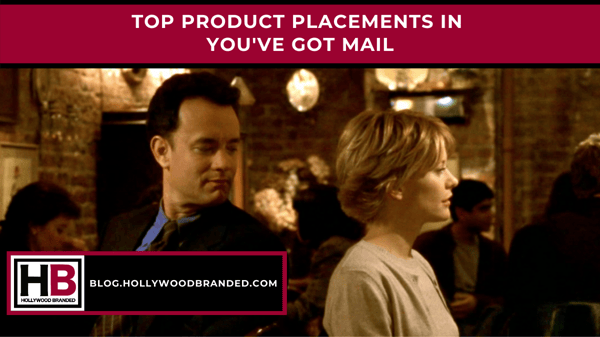 A Trip Down Memory Lane

As the landscape of film criticism has changed substantially in the last twenty years, a lot of rom-coms that were once beloved are now seen with a little bit of side-eye. Either the jokes are based in dated references or worse yet, they are now viewed as problematic. After recently rewatching You've Got Mail, I can honestly say this film doesn't really fall into either pitfall. This charming love story is set in the romantic westside of New York during Autumn, and it's such a fundamental part of the story that the city is as much a character as either lead role.

As the film is very much a product of its time and a time machine to the 90s, it's filled with not only pop culture references but more importantly - brands. As the title of the film, itself, is form of product placement, it lends to the very nature in which brands play a central role in the storytelling. This is particularly true as the film is centered around two people who meet through an online chatroom and really cultivate a budding romance through email.

Let's take a look at some of the movie's most memorable and successful integrations of brands and how they find their way into the story...

This placement is really perfect for the role it serves in the film. In it, Kathleen Kelly (Meg Ryan) has a boyfriend, Frank (Greg Kinnear) who is depicted as your classic bleeding heart, neurotic writer and columnist. As an eccentric and quirky character, he is obsessed with perfection and purity. It seems a natural fit that he would come home with a new typewriter that he believes will be the tool to to help him unlock his true potential. This reference, of course, was funny at the time but was not as eccentric as buying a typewriter is today. As he gushes on about his new typewriter and the profound impact it could have on his career, Kathleen is quick to point out that he already owns an Olympia printer. As she speaks, the camera pans to a second typewriter from the same brand, showing both devices with perfectly branded logos. 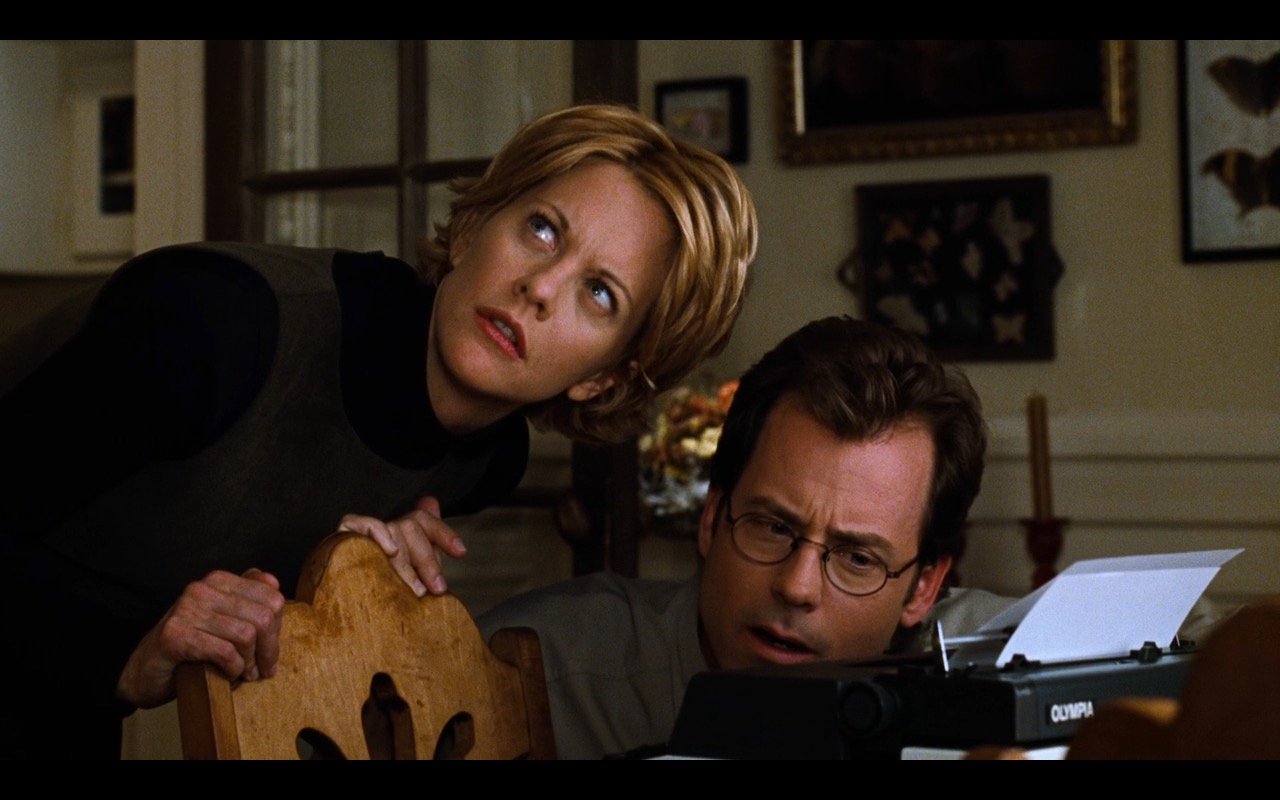 In doing this, the film implements the brand into the story that creates a sense of power and authority behind Olympia typewriters. Granted, we can't expect that viewing audiences would consciously think "maybe I'll be a better writer if I get this typewriter." What it does do is create a positive association with the brand that sticks with consumers regardless of whether they think anything the character says about it is true.

What's interesting about this placement is that not only is not always positive, some of it is even pretty negative. Joe Fox (played by Tom Hanks) famously says, "the whole purpose of places like Starbucks is for people with no decision-making ability whatsoever to make six decisions just to buy one cup of coffee. Short, tall, light, dark, caf, decaf, low-fat, non-fat, etc. So people who don't know what the hell they're doing or who on earth they are can, for only $2.95, get not just a cup of coffee but an absolutely defining sense of self: Tall. Decaf. Cappuccino." Presenting this information alone, you'd think this was just a bad placement. However, Starbucks is featured several times in the film, including the opening montage that pans around the neighborhood, establishing it as an integral part of the rich and beautiful community that both characters love. 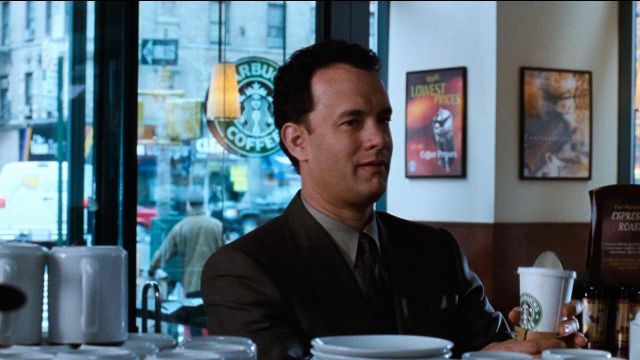 What's also funny and a little contradictory about the coffee brand's role in the film is that despite the fact that Kathleen Kelly believes firmly in the power of small business and is anti-conglomeration, her feelings for Starbucks aren't negative at all - she loves it. In contrast to Fox's aforementioned gripe, she romanticizes her morning coffee routine and recites her order like it's a haiku. Even as Fox looks disgruntled and dissatisfied with Starbucks, he still finds himself visiting the shop on a daily basis - even when it means actively avoiding Kathleen as they quarrel.

While the placement's role in this film isn't always in glowing love and appreciation, it still does one thing very beneficial to the brand - it establishes cultural relevance and dominance. The movie could have easily incorporated any other coffee store, but it chose Starbucks because of its ubiquitous social currency. It's something that everyone knows and understands, even if they don't love it. Either you laugh at how smug Fox is and the hypocrisy of him frequenting a chain he doesn't like or you relate to him because you think it's pretentious too. Regardless of how you relate, the fact that you do at all makes it a successful integration because it re-instills the ever-presence of one of the world's biggest coffee brands.

Almost as iconic as the title itself is the image of Meg Ryan sitting gleefully in front of her Macintosh computer as she composes a new email to Joe Fox. Production could have easily gone with a competing brand, but they deliberately chose Apple for a reason. Even when it had become a major computer seller, for a very long time maintained an image of being an underdog and resilience. They're famously known for their "Think Different" campaign that featured images of artists like John Lennon and Frank Oz. It's a natural choice for a character like Kathleen Kelly who represents the underdog of her own story. While it's exposure in the film may seem subtle with very small logo exposure, the iconic multi-colored apple logo was so recognizable that it never needed to be in your face to process it. You automatically knew it was Apple because the branding was, and is, so distinct.

This was also a huge win for Apple, as the brand did not pay for this placement at all. It was a trade-based deal, where all the brand had to do was lend production computer equipment for the duration of filming. In traditional product placement, this is actually not that uncommon of a practice. The exchange cost the brand almost nothing and it gave production access to equipment that it would need anyway. But instead of purchasing or renting it, all they had to was keep the logo visible in exchange for usage of expensive equipment. While many people believe all product placement is expensive and paid for, trade-based deals like this are actually very common within the industry.

As AOL was the most popular email service of the nineties (what a true throwback!), it only made sense that this would be vessel through which the characters communicate. However, the film makes a deliberate choice to lean into the magic of online dating via email as the film opens with each character reciting a monologue about the magic and sense of wonder their hearts are filled with as they hear the phrase "you've got mail." In fact, the value and worth of a placement like this is so clear there's almost little to mention about it because it truly speaks for itself. It is both speaking to and for the space in time it was created and the branding of AOL is so specific to the nineties that anyone who lived through it (this writer is guilty as charged) has a strong association of this brand with that moment in time.

This film perfectly demonstrates why product placement is truly the gift that keeps on giving. When done correctly, it can be a meaningful part of storytelling that feels organic to the narrative and uplifts its relevance in pop culture.