Michael Bay’s hugely successful Transformers movie franchise currently consists of seven movies, released over the span of ten years.  Since 2017, the studio has been releasing a new movie in the blockbuster action series will every year, including this past December's Bumblebee and soon there will be a Netflix show!

One of the main characteristics of the franchise is product placement, that brands round the world vie to be chosen for - often at high price tags. In this blog post we provide a detailed infographic and glimpse into the history Transformers and what brands have made it onto the big screen. 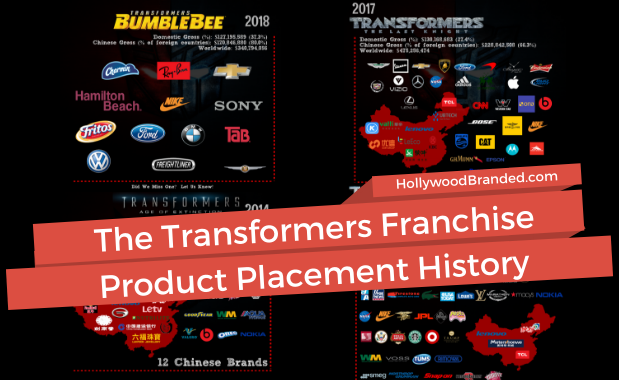 An Astonishing Number of Brands

In just the four films, there were OVER 220 brands featured on screen.  17 of these were Chinese brands who have worked with the film producers to have a featured product placement role.

Most of the brands that have been featured in Transformers, especially in the first two releases, have been straight product placement with loan or gift of product to the movie, as well as some promotional support of bigger brands like automotive companies.

The Chinese brands, however, as well as some of the larger exposures in the last two films have been driven by cold hard cash - an incentive the filmmakers truly appreciate.

Now, in feature films, it is not unheard of for there to literally dozens and dozens (even 50+) brands who provide product to the film.  However, they don't all make the final cut.

Why Brands Want This Film Franchise

For a myriad of reasons, the Transformers franchise brings in major audiences.  And that matters to brands because large audiences mean more potential for exposure of their brand.

The fourth Transformers: Age of Extinction grossed more than one billion dollars worldwide.

Something Austin Powers would have relished back in the day!

That means over 125 million people viewed the film on a big screen.  It doesn't even count home entertainment DVD release, streaming or TV viewing.  That's a lot of eyeballs!

As hundreds of tweets have claimed, the movie is one big advertisement and has been named by some Transformers: Age of Product Placement.  Back in 2015 the digital outlet covering entertainment marketing, BrandChannel.com awarded the film as having the highest "Achievement in Product Placement in a Single Film", based on the shear volume of placements.  But keep in mind, other big movies have just as much - if not more product placement.  As examples, according to BrandChannel Sex and the City had over 90 product placements and Iron Man 2 had over 60 products featured on screen.

Why Product Placement Is A Good Thing

Organic "good" product placement strategy is actually a win-win situation. For the viewer it helps make the film more real. The giant transforming robots running around on earth isn't the most realistic idea already, but the product placement helps us to relate to things and places in the film, and makes us think that this isn't happening in a world too far from our own, seeing as they are eating, drinking, driving and using all the same things we do.  It helps the movie engaging more with the audiences.

We are not saying "hit them over the head" product placement is good, as we are true believers that brands should be organic and enhance the scene, versus call out 'me me me look at me" in scenes.

And for the filmmakers, the dollars it either saves or provides also helps, as does the mega marketing of co-branded media partnerships it drives.

The Trend Of Product Placement In The Chinese Market

Product Placement and co-promotional marketing by brands of films is becoming more commonplace as Hollywood producers are using product placement as a means to generate additional funds (or cost savings!) for film productions. No film can be funded based on product placement alone - nor should it.

And new sources of partnerships are being found in the eager Chinese market, who recognize that Hollywood movies not only offer an internatinoal stage, but also a tremendous platform to Chinese viewers in China itself.

This is a growing trend, and we will continue seeing it in the years to come.  Especially as more Chinese corporations invest in Hollywood production companies and studios, such as with the recent Wanda and Legendary deal.

And the best thing for China?  Movies like Transformers 4th franchise release... which had a Chinese storyline and a location in China.  This is something you will see more and more - along with Chinese characters playing "hero" roles in action films.  The studios are smart - not only do they want Chinese brands to come on board, they also want to help ensure that the Chinese government ALLOWS their film to be one of the chosen few to be distributed in China.  And Chinese heroes and storylines that positively reflect China are one of the best ways to make that happen.

Chinese locations also make it more easy for brands as well who may have stood out like a sore thumb to appear in a Western world where they are not sold.  Everything, including the locations, the storyline and the Chinese actors help makethe film consistent with contemporary China, and relavent to the Chinese audience.

Finally... we bring you our Infographic Masterpiece!  Which shows most of the brands in the six films to date.  We recently added in The Last Knight And Bumblee... let us know if we forgot any brands along the way!

Further Readings And Your Brand On Screen Next!

Want to learn more about product placement and its role in other blockbuster films?

Have you ever wondered how a comprehensive product placement program works? Or do you want to know how to create a promotional partnership strategy with a movie partner? This video will answer all of your questions as it shows the steps and processes taken by Hollywood Branded that lead to your brand increasing both consumer engagement and sales!