Twitter is ever-evolving and one of the changes in Twitter since the social network went public was the addition of paid ad tweets in the newsfeed. And while this happened quite awhile ago - it's still impacting brand choices for engagment. Something a little different than a paid celebrity tweet, where in 280 characters or less, celebrities endorse brands.

Sometimes it is blatantly clear that a celebrity tweet has been backed by a brand. However, since it is not something that is clearly listed one way or the other, consumers are not always able to discern between paid endorsement and mere personal recommendation.  In this blog post Hollywood Branded takes a look at what the difference between a paid ad post versus a celebrity endorsed post looks like and how each benefits a brand. 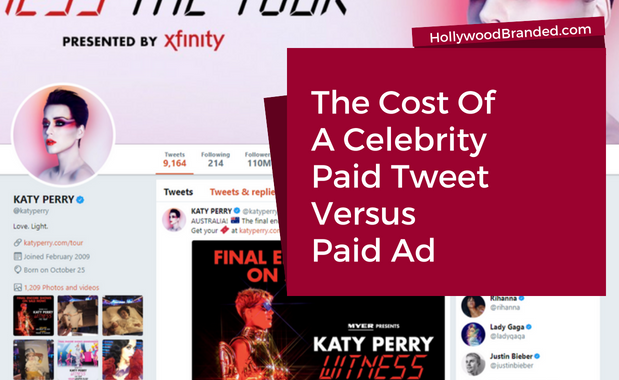 How It Works Now

With the new advertisements, however, brand-sponsored messages will show up in a user’s newsfeed from brands that may or may not be followed by that particular user.

Now the question arises: Which method is more effective? A paid advertisement, clearly labeled as such, or an endorsement in the form of a celebrity call out on their personal account? 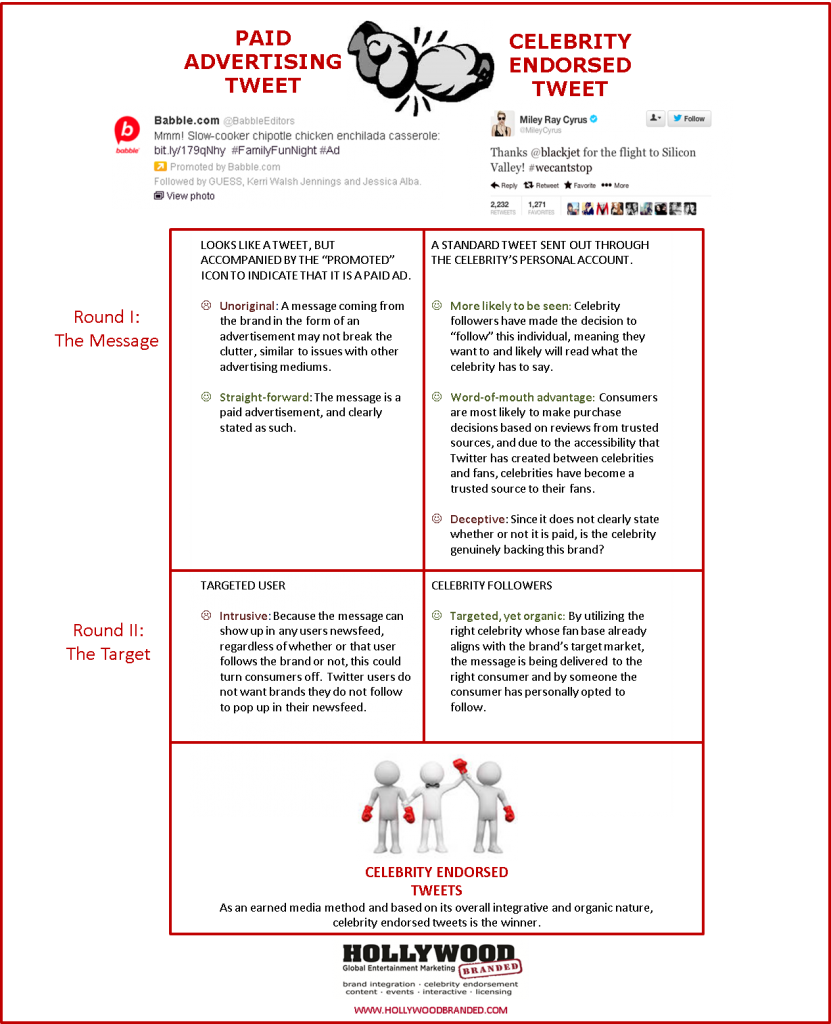 Many, including the Federal Trade Commission, have had concerns with the lack of transparency surrounding celebrity endorsed tweets. Because Twitter is a social network that users consider to be their personal space, paid advertising tweets disguised as everyday commentary is a problem, according to the FTC. In order to avoid deception, the FTC states that when it is not obvious to people that something is an ad, it should be disclosed that the endorsement was paid for.

Others argue that ignorance is not an excuse for consumers in today’s media and advertising landscape, and that they need to be aware that advertising can come in many forms. You don’t see Justin Timberlake clarifying at the end of a Budweiser commercial that he has been paid to star in it.

The paid advertisements on Twitter are clearly stated as such, with the “Promoted” icon denoted on the bottom. Though it adheres to FTC standards and is straight-forward to the consumer, will another blatant advertisement simply add to the clutter?

With word-of-mouth recommendations being the most trusted form of advertising, combined with the fact that celebrities are highly influential amongst consumers, the organic appeal of celebrity tweets offers a multitude of benefits to brands.

A message embedded in a celebrity tweet is delivered via that celebrity’s voice, and in the newsfeed of users who have personally opted to follow that celebrity. This celebrity following tends to be not only very large, but made up of very enthusiastic consumers who are most likely to engage and interact with brands.

Though an integrative campaign utilizing all methods is likely to be the most successful, it is imperative to incorporate an earned media method to traditional media in order to stay current and engage consumers in a unique way. Thus, when judged against one another, our winner of the two would have to be celebrity endorsed tweets.

Keep in mind these additional options for using organic product placement to get the same star-dust brand lift!

A Look At Example Celebrity Tweets

Rapper Snoop Dogg tweeted his like of an ad the Toyota Sienna minivan.

From the most famous tweeter family of all, reality TV star Khloe Kardashian dialogued about a brand of jeans that helps show off her behind iwth the post "Want to know how Old Navy makes your butt look scary good? Ask a Kardashian."

CampusLIVE paid $3,500 to Lindsay Lohan to tweet "These challenges for college kids on (hash)CampusLIVE are SO addicting!'' and the 2.6 million fanbase potentially exposed to the post resulted in 4,500 clicks to the CampusLIVE website.

Please keep in mind that this is an updated blog... which we originally wrote 5 years ago.  And times have a'changed... as in, how much people are getting paid.  Today, it's quite easy to have a 'celebrity' ask for a minimum of $30k to put together social media posts for a brand.  Or $300k.  Even no-named influencers who have around 10,000+ fans may get paid $125 now using a common cost per thousand algorithm.  Which means once you add the word 'celebrity' to influencer... plan on digging deeper into your pocket book.  The Kardashians get $250k+ for tweets...

How Else Can I Partner With Celebrities With My Brand?